Sorry for replying to an old thread but I see this house is back on the market at 1.095m.

What are people’s thoughts. Have prices in general increased by that much since then?

I have to admit I think it’s lovely - although BER is lower than I’d expect given how it looks. The garden is east facing but at 180ft would that be an issue for evening sun?

Hi Emur. Did the house sell for 895k end 2015? I took a quick look at the pretty charts thread and a rough stab at the increase in house prices for South Dublin from end 2015 to now is about 21%. So puts the price around 1.09m. Remarkably close to the asking !

It seems from the picture they have the patio down the back of the garden which I assume is to catch the evening sun. We have a bungalow with an East facing back garden and we placed the patio at the rear corner to catch then evening sun. It’s there in summer until about 7pm.

The BER rating couldn’t be much worse! We bought a BER F and it needed significant investment in terms of heating , plumbing , insulation and windows. Make sure you budget that in.

As an aside I’m staggered at the size of that garden for a relatively ordinary home. What a colossal waste of land! No wonder there’s people commuting in from miles outside the city. Hopefully that’s the last we see of this type of land usage!

Hi Emur. Did the house sell for 895k end 2015? I took a quick look at the pretty charts thread and a rough stab at the increase in house prices for South Dublin from end 2015 to now is about 21%. So puts the price around 1.09m. Remarkably close to the asking !

I don’t think it ever sold. Given the investment you outline as being required maybe that put off potential buyers.

Thanks guys. I think the garden is amazing, but realistically we would use it most in the evening so losing sun early would be a bummer. A smaller west orientation would work better for us.

Hi Emur, that’s a nice house but v expensive for a 3 bed! I’m sure you’ve seen this 4 bed the street over https://www.daft.ie/for-sale/semi-detached-house-16-sycamore-road-mount-merrion-co-dublin/2937085

How are you finding the search? The market is insane - lockdown is basically causing celtic tiger level prices from what I can see. Houses clearing 100k+ above asking without anyone stepping foot in them.

Take this one that popped up yesterday: https://www.daft.ie/for-sale/detached-house-81-sandyford-village-sandyford-dublin-18/3143506

Good house, wrong side of m50. Sold for 770k 18 months ago, back up for €895k now and will undoubtedly get it. Just a crazy bubble which will take time to taper off after things reopen.

Thanks for the replies. I am finding the search beyond frustrating - very much feeling like the pause button has been pushed. We are renting so ready to move quickly but I really don’t want to bid on a house I haven’t seen in person. I’m just really hoping for some more supply to come on.

How are you finding it??

k+ above asking without anyone stepping foot

Just as an FYI as may be useful. You’re comparing to an ex.Vat figure on the PPR. That sold for €875k in 2019 and so if it made €895k they’d undoubtedly be losing money after putting in floors etc. Consistent with recent CSO data which shows Dublin houses pretty much flat over the last year and still below 2018 peaks.

Thanks, hadn’t realised that was ex VAT which makes more sense. Is that generally the case on PPR? Yes I was being flippant re celtic tiger prices thankfully, but my own experience in Q1 of this year is I have bid on 2 properties and closely tracked a 3rd - they went 120k, 105k and (I think) 75k above asking. In each case 4/5 bidders rapidly driving it up.

I noticed McWilliams tweeting about it over the weekend and his responses made for interesting reading, people seeing similar all over. Hopefully there’s some sort of release when viewing can start back but it’s going to take some time for current demand to abate. Also I dread to think of builders renovation quotes given the backlog of work they’ll have on now!

No, it’s only the case for new build properties where it’s shown ex. VAT. If you click into the entry you’ll see it marked “VAT Exclusive - Yes/No”. e.g. 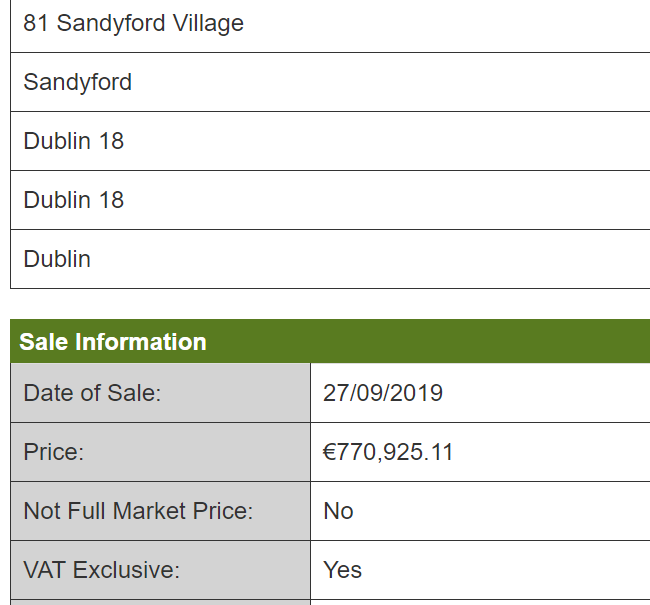 There’s a website I find a bit easier to use as it automatically adds VAT to new builds and also has a useful map visualization of sales: Irish Property Price Register (propertypriceregisterireland.com)

I have seen similar with a few properties we were interested in, including one which is €275k over asking last time I checked. That said, the ones that really went mad, I think they were clearly underpriced in the first place. Yeah we’re thinking we’ll just rent for another year and see what comes. Central Bank yesterday already signaling that we need permanent tax increases to fund the additional spending we’ve committed to. Combine that with supports being unwound and I think COVID is going to hurt a little more than people think. The only thing that would really concern me is a period of rapid inflation.

I agree with your observation of building costs also. I’d be avoiding all but absolutely essential renovation work for the foreseeable.

Best of luck with the ongoing hunt!