I would also like to remind you, that the same Democrats that you are accusing of massive electoral fraud, are the very same people who were unable to keep Hillary’s private e-mail secure.

The Republicans were very much correct in that regard.

It seems incredible that Democrat’s who “helped” Hillary with her e-mail’s are the same people who could execute one of the most elaborate electoral fraud’s we’ve ever seen.

The choke points or the locations where fraud takes place are in the cities, or count centres where boxes of votes are just “found” when someone needs a few thousand votes to get over the line, the geographical size of the state doesn’t matter, its irrelevant once people can find extra votes at will, or if you control the software in the voting machines, it doesn’t take hundreds of people per state, your numbers are way off

The US runs first past the post elections, its not complex to count, yet in states like California it can take far too long to figure out who “won”

Rigging an election in Ireland is pretty hard because Tallymen are watching every box opened, they will know how many boxes arrive from each polling station, and anyone arriving into a count center with a box of votes he just “found” better have a very good story, very hard to rig, which is why I was very suspicious of Bertie and his love of electronic voting, far too easy to fix

Wayne County Detroit is supposed the epicentre of the fraud, would you not agree? Rudy and the boys are extremely aggressive in their assertations that the inner cities are at the heart of the “stolen election”.

If the fraud is anywhere, it most definitely has to be in Wayne County - right?

I have said it twice now. There was no blue wave. Biden won this election with a swing of 2%. The swing was not isolated to choke points at all. If anything, the supposed heart of electoral fraud swung slightly less to Biden than the rest of the country.

Apparently Michigan is “back in play”.

Meanwhile Georgia has fallen to the Democrats.

Where is the Iraqi’ Information Minister when you need him?

In the mean time, Georgia has just certified Biden as the winner of the election.

A Republican state in Georgia has just certified Biden as president.

Let that sink in.

It seemed that way and then it appears Georgia and then their seemed to be a change. See link below: 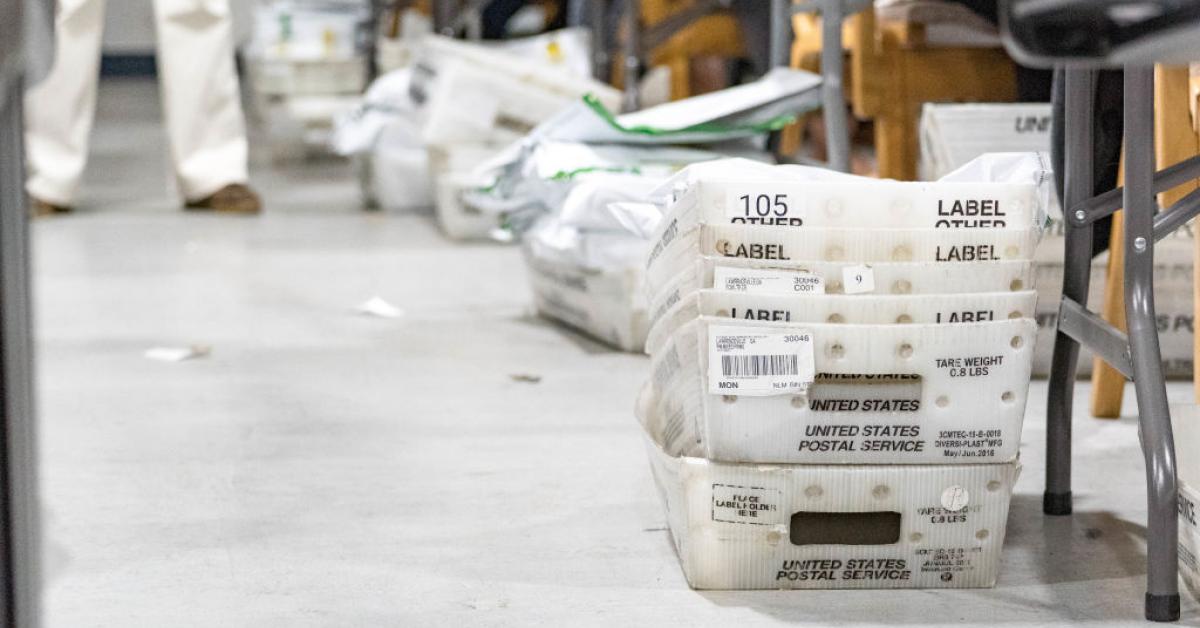 TBH I don’t know what is going on right now with Georgia, but according to the ballotpedia site, 15 states have since missed their certification deadlines and Georgia is included on the list.

Is Sidney Powell off the team (was she ever on it, probably not) or is this a clarification and/or is something else going on.

“Sidney Powell is practicing law on her own. She is not a member of the Trump Legal Team. She is also not a lawyer for the President in his personal capacity.”

Smartmatic, the Electronic Voting Machine manufacturer whose machines are notorious for failures, is based in Venezuela. The Treasury Department, which is supposed to be the look into connections between sensitive US infrastructure and foreign interests has failed yet again to protect the American people. What is more important than the correctness of our Democracy?

It’s mad to see how Trump is winning so bigly on this site, yet out in the real world his bungling legal team couldn’t fight its way out of a wet chip bag.

Is this all a ruse or a deliberate rope-a-dope strategy from big Don?

It’s mad to see how Trump is winning so bigly on this site, yet out in the real world his bungling legal team couldn’t fight its way out of a wet chip bag.

Is this all a ruse or a deliberate rope-a-dope strategy from big Don?

“If a tree falls in the forest and no one is there, does it still make a sound?”

So far 100 of 243 Dominion employees have deleted their profiles. But move along, nothing to see here. It’s all sour grapes from deplorables led by a man who won’t concede, right? 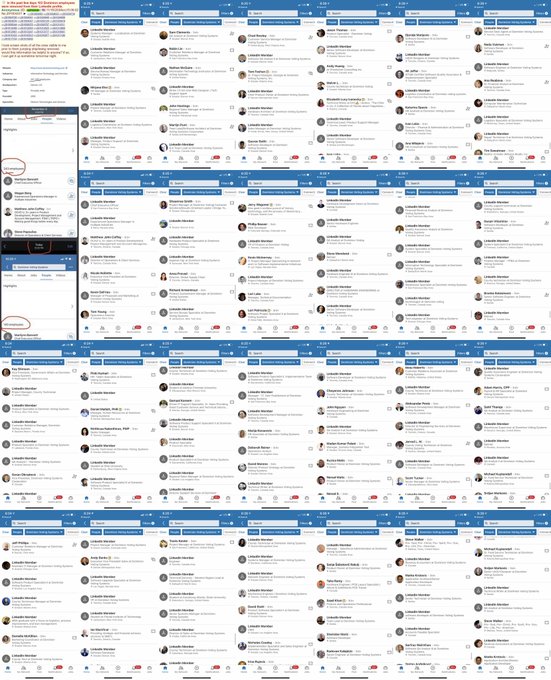 The votes were off the charts for President Donald. J. Trump and the Dominion software algorithms were not set high enough to handle their fraud so they stopped counting! That is what Attorney Sidn…

Follwoing up on this, Flynn or his son tweeted Sidney Powell was locked out from tweeting for 12 hours on Sunday, so statements and comments appeared to come via other(known) sources, this is the most complete.

Statement From Sidney Powell To “We The People” who value Freedom, Life, Liberty & the Pursuit of Happiness!
@GenFlynn @realDonaldTrump

I agree with the campaign’s statement that I am not part of the campaign’s legal team. I never signed a retainer agreement or sent the President or the campaign a bill for my expenses or fees.

My intent has always been to expose all the fraud I could find and let the chips fall where they may-whether it be upon Republicans or Democrats.

The evidence I’m compiling is overwhelming that this software tool was used to shift millions of votes from President Trump and other Republican candidates to Biden and other Democrat candidates. We are proceeding to prepare our lawsuit and plan to file it this week. It will be epic.

We will not allow this great Republic to be stolen by communists from without and within or our votes altered or manipulated by foreign actors in Hong Kong, Iran, Venezuela, or Serbia, for example, who have neither regard for human life nor the people who are the engine of this exceptional country.

#WeThePeople elected Donald Trump and other Republican candidates to restore the vision of America as a place of life, liberty and the pursuit of happiness.

You may assist this effort by making a non tax-deductible contribution to www.DefendinqTheRepublic.orQ. #KrakenOnSteroids"

GSA begins opening transitions, recorded with a letter of some note.

NEWS: The GSA has informed president-elect Joe Biden the administration is ready to begin the formal transition process, according to a letter from administrator Emily Murphy sent Monday afternoon and obtained by CNN, via

I want to thank Emily Murphy at GSA for her steadfast dedication and loyalty to our Country. She has been harassed, threatened, and abused – and I do not want to see this happen to her, her family, or employees of GSA. Our case STRONGLY continues, we will keep up the good…

…fight, and I believe we will prevail! Nevertheless, in the best interest of our Country, I am recommending that Emily and her team do what needs to be done with regard to initial protocols, and have told my team to do the same.

On record, an excerpt:

…I did not receive any direction to delay my determination. I did, however, receive threats online, by phone, and by mail directed at my safety, my family, my staff, and even my pets in an effort to coerce me into making this determination prematurely. Even in the face of thousands of threats, I always remained committed to upholding the law…contrary to media reports and insinuations, my decisions was not made out of dear or favoritism. Instead, I strongly believe that the statue requires that the GSA Administrator ascertain, not impose, the apparent president-elect. 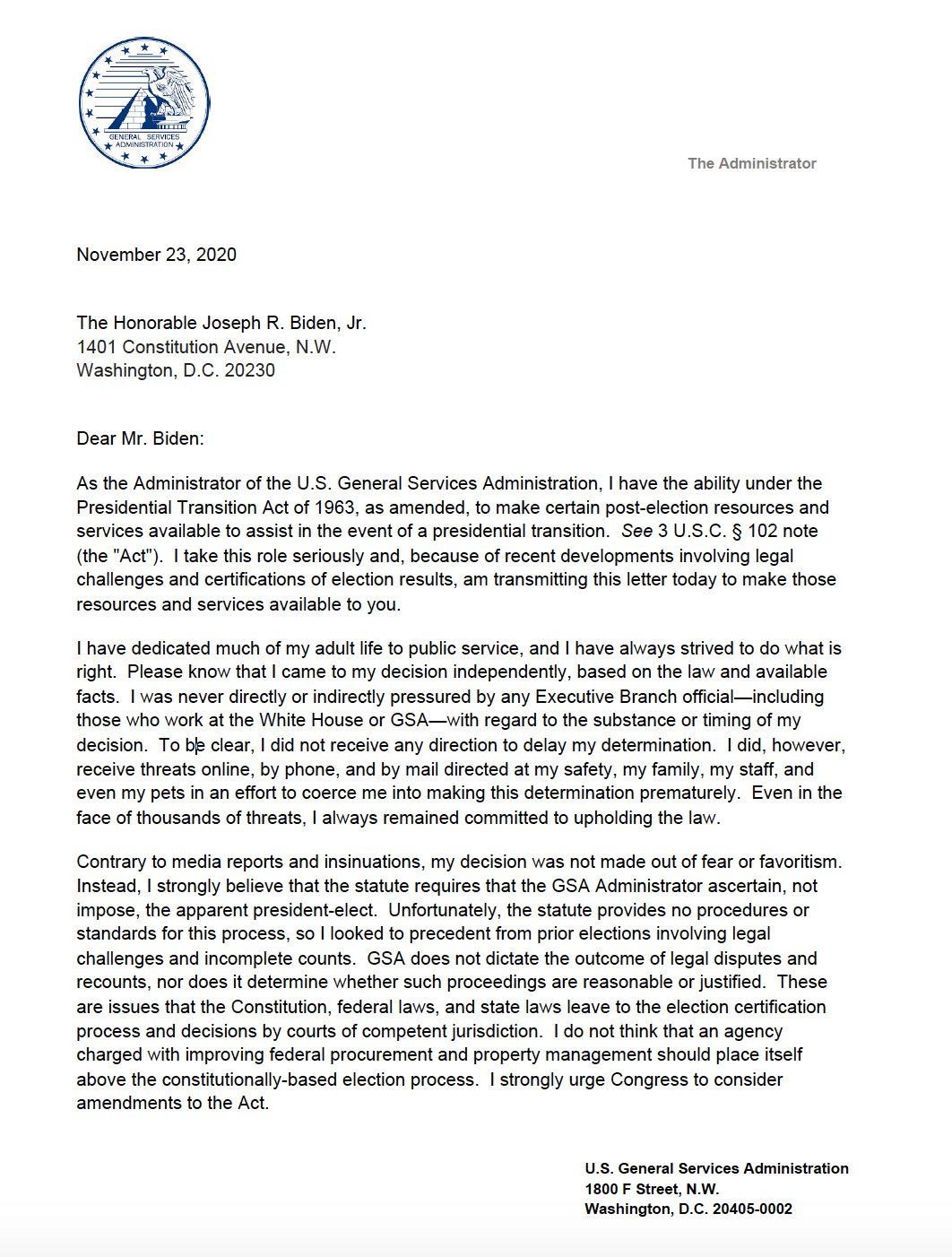 Perhaps she made the mistake of being on one of the lists. 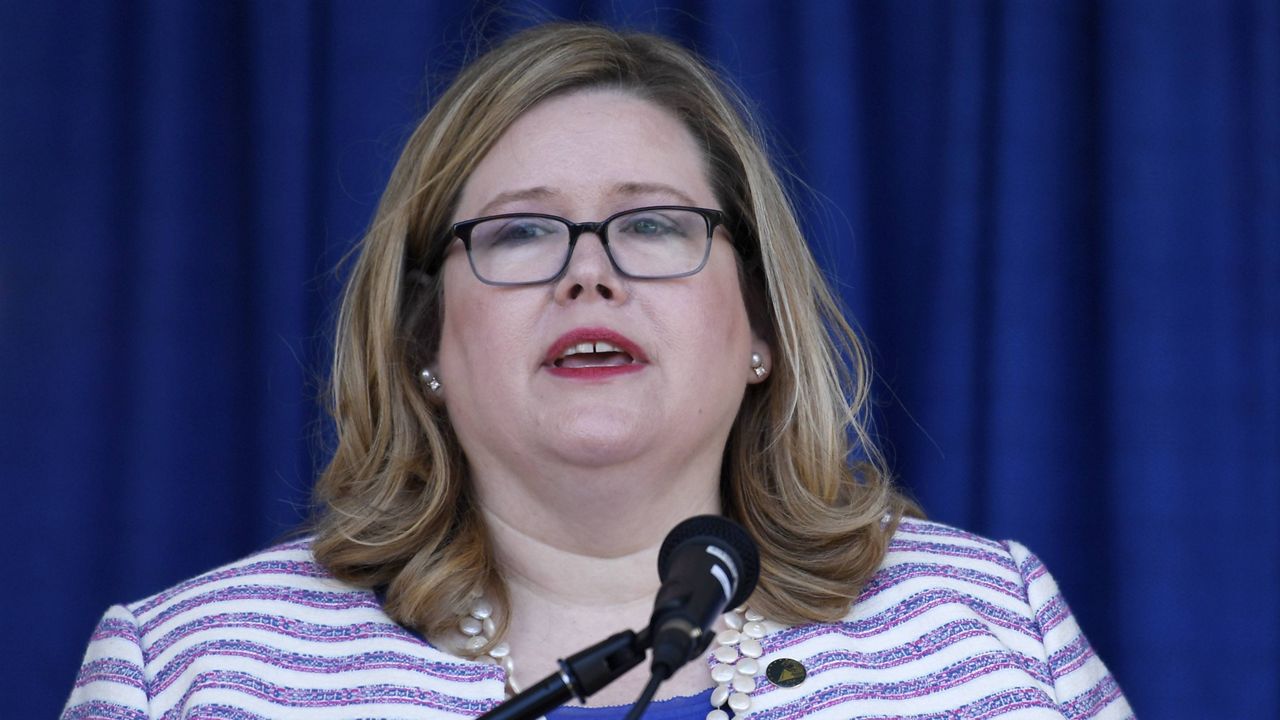 Dems Threatened Govt Official, Her Family And Pets in Order to Obtain Govt...

In paragraph two of the letter, Murphy reveals she “received threats online, by phone, and by mail directed at my safety, my family, my staff, and even my

Will They Steal The 2020 Election?

While you wrestle with the reality that offshore companies count, manage, organize, control and operate most of our elections, realize that election software is more than just a tool to manipulate the outcomes of elections.

Don’t forget to get your male vitality supplements!

What does GSA being allowed to preliminarily work with the Dems have to do with continuing to pursue our various cases on what will go down as the most corrupt election in American political history? We are moving full speed ahead. Will never concede to fake ballots & “Dominion”.

“You sent out in the state of Commonwealth of Pennsylvania 1,823,148 absentee or mail-in ballots, you received back 1.4 million approximately. However, in the count for president, you counted 2.5 million."

Welcome to the War. The info purge is at 11 these days. 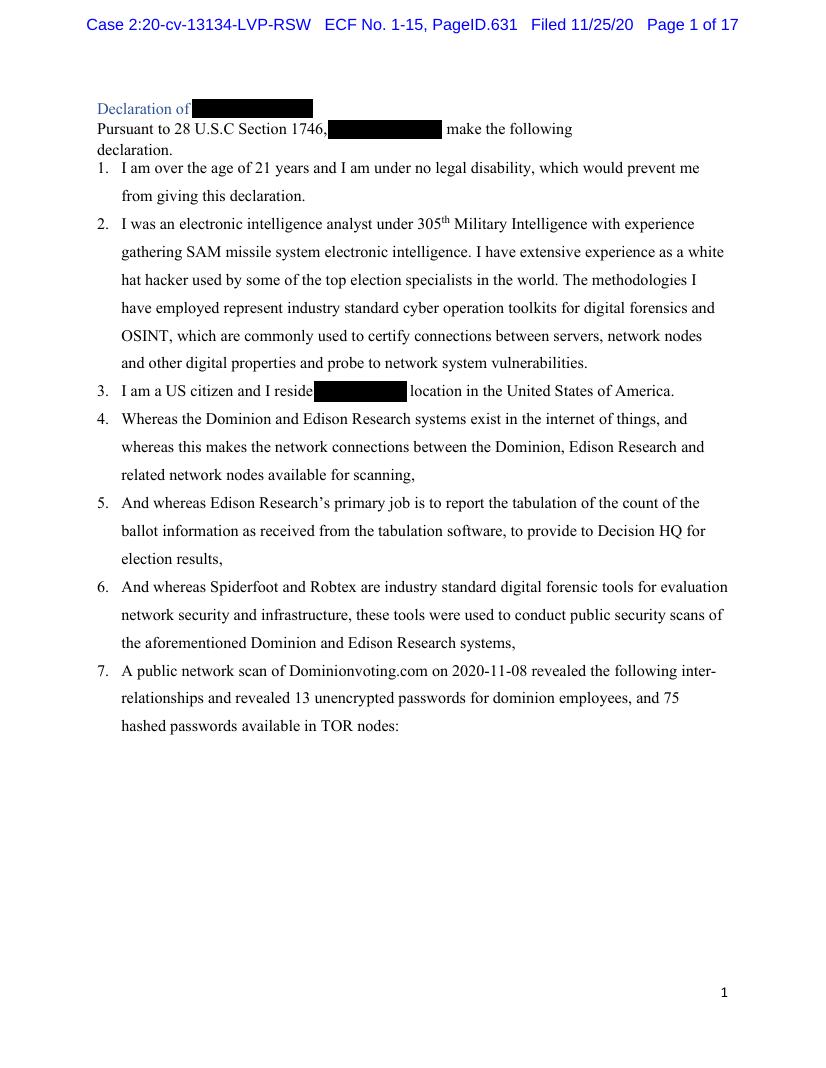 gathering SAM missile system electronic intelligence. I have extensive experience as a white hat hacker used by some of the top election specialists in the world. The methodologies I have employed represent industry standard cyber operation toolkits for digital forensics and OSINT, which are commonly used to certify connections between servers, network nodes and other digital properties and probe to network system vulnerabilities.

In my professional opinion, this affidavit presents unambiguous evidence that Dominion Voter Systems and Edison Research have been accessible and were certainly compromised by rogue actors, such as Iran and China. By using servers and employees connected with rogue actors and hostile foreign influences combined with numerous easily discoverable leaked credentials, these organizations neglectfully allowed foreign adversaries to access data

A Man-in-the-Middle (MITM) cyber attack was carried out by covert operators using sophisticated tools, such as Hammer and Scorecard. The MITM attack occurred in two ways. Initially, remote operatives used USB memory cards containing cryptographic keys and access system back doors to alter votes in battleground states. Subsequently, the results were forwarded to Scytl/SOE Software servers located in Frankfurt, Germany (previously, Barcelona, Spain). The MITM attack was structured to ensure sufficient data alteration had occurred prior to forwarding the tallied results to the Scytl/eClarity Software Electronic Night Reporting (ENR) system. The reason election data are forwarded overseas is to avoid detection and monitoring by the USIC to obfuscate the MITM.k.In my expert opinion, theDVS Democracy Suite, Scytl/SOE Software/eClarity and Smartmatichave not produced auditable results in the 2020 election. It is evident that ballots were not properly validated, system records were not kept, and the system experience considerable instability even several days prior to November 4, 2020 that require DVS to implement software changes at the last minute. In addition, the disparity in data distribution after 4:30 AM on November 4, 2020 indicates significant systemic anomalies that were widespread among all battleground states.

The evidence is both extensive and persuasive and indicates large-scale fraud by remote operators.

…I conclude that a combination of lost cryptographic key contained on stolen USB memory cards, serious exploitable system and software vulnerabilities and operating system backdoor in DVS,Scytl, SOE Software/eClarity and Smartmatic created the perfect environment to commit widespread fraud in all states where these systems are installed. My analysis of the 2020 Election from NY Times data shows statistical anomalies across the battleground state votes.

These failures are widespread and systemic-and sufficient to invalidate the vote counts .17. I conclude with high confidence that the election 2020 data were altered in all battleground states resulting in a hundreds of thousands of votes that were cast for President Trump to be transferred to Vice President Biden.

These alterations were the result of systemic and widespread exploitable vulnerabilities in DVS, Scytl/SOE Software and Smartmatic systems that enabled operators to achieve the desired results. In my view, the evidence is overwhelming and incontrovertible.

“You sent out in the state of Commonwealth of Pennsylvania 1,823,148 absentee or mail-in ballots, you received back 1.4 million approximately. However, in the count for president, you counted 2.5 million."

I think this is the full length video which the now removed tweet sourced it’s short Gulliani section from and so maybe if anyone locates the moment, please post the time marker.

His Senate acct is here: @SenMastriano