Covid vaccine hesitancy is trending downwards in Ireland with just four per cent of the population planning to refuse a vaccine, according to the latest tracker survey.

…The survey found vaccine hesitancy to be highest among the younger cohort of those aged 25 to 34.

“100% of the people surveyed in our survey said they would agree to be surveyed.”

They’ll shift that end of year if they hit their injections targets and label the remaining minority, who refuse to believe the lies and unwittingly become test subjects and risk their lives as:

Mock/ridicule/dehumanise intended mark before the kill - so the mob, the beautiful mob can go in with dignity dose after dignity dose.

The purpose here is to get 70/80% of the population over the line and then turn around and treat the remaining NO people and claim they are the enemy of humanity.

You will see the same with their Climate Change antics. 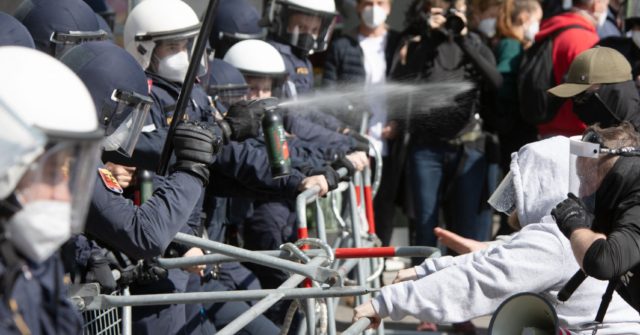 Austrian counter-terrorism authorities say they have seized firearms and paramilitary equipment after a raid on "corona deniers".

Interior Minister Karl Nehammer commented on the raids, saying: “It is hard to believe what was being tried here by corona deniers. Thanks to meticulous investigative work, these criminal networks have been unmasked. The perpetrators must be punished with the full force of the rule of law.”

Apply the spurious and fully bogus “fully vaccinated” standard per the teachings of the Global Covidian Cults, Regime enablers and Corporate Sorcerers, the current rate stands at a painfully abysmal 13.2% have received both hits of the weapon.

Amid the jibber jabber

Meanwhile, the Minister for Health has said that the wearing of masks in crowded places could still be required in autumn and early winter.

Stephen Donnelly was speaking during a Seanad debate to extend emergency public health powers until 9 November.

The powers allow for Covid-19 restrictions to be quickly reimposed at any stage.

He said that while the country is ahead of the best case scenario presented a few months ago, the virus is at a precarious stage.

Makey up nonsense unless the “virus” is read as a metaphor, but for what… ah for what indeed!

Mr Donnelly said it would be sometime yet before a sufficient number of people are fully vaccinated.

But he said unimpeded international travel for those who are vaccinated is on the cards and Government will, he hoped, allow this to happen within the EU green certificate system as quickly as possible.

However, the extension of the emergency powers all the way to November was questioned by some in the Government parties.

The truth is going to be a harder sell this time round since the injection roll out is not working out as planned. Turns out people aint’ a stoopid as the lying liars on the telly screen. People like their inalienable freedoms. They like their bodily integrity and exercise their “thank you but no thanks” right as they see fit.

However you can not ignore the Regime is not stepping down from Rick Astley protocol level 11.

Two days later “breaking news” have what you already knew reading the previous post of 2 days ago, if the topic title wasn’t already a give-away, or perhpas you are basking in the extended free trial of permanent lockdown?

(Donnelly) He added: “We do need these emergency powers to unwind the measures that are currently in place in an orderly and sustainable way.

“I feel that allowing one further extension of no more than three months is justified and proportionate.

“If we do find ourselves in the position, which we all dearly hope not to be in, whereby we need some targeted public health measures beyond February of next year, we will introduce another Bill and put it through the safeguards that the legislative process provides.”

In other news. Plywood prices and lumber in general are to the moon!

Must be all those walls closing in etc. etc.

They need the emergency powers to keep vaccinating.

Conditional marketing authorisation only. Risk:benefit in a declared pandemic.

No emergency, ? no legal basis or authorisation for vaccinations?

Yes perhaps that’s exactly it. Perhaps if that is really exactly it, it would explain why a wait & see approach is a political no show.

Aside from the enormity of the social, moral, ethical, political and economic implications. It would I presume mean overnight nullification and voiding of all the theatrical cos-play and new-religious observances to go about your day, think how disruptive this would be for people to have to adapt to their old ways of being free, then the cat would be well and truly out of the bag.

Not forgetting, there is the dreaded vista of a predicted ADE winter massacre, which could then be blamed on intergalactic alien mutant variant and why we’ll never leave lockdown ever ever ever unable to join our star brothers and sisters in the sky.

So even if it is only the last 10% of the population vaccinated population after the end of the state of emergency and the eventual block settlement for all the health damage done to the vaccinated is pretty low a few 10K’s euro, the total cost to the state will quickly get into NAMA-land levels of money.

Looking at the recent adverse response mortality numbers from other countries the total number of deaths due to the SARs CoV 2 vacine must already be in the 1200 to 1400 range. And will probably top out around low 2,000’s. The claims just fro those death will run a couple of billion just by themselves. Quite separate from the probable low 10k’s of non fatal long term effects.

For reference the number of excess deaths due to SARs Cov2 viral pneumonia that were not substitute cause deaths might top 1000. Maybe. In the typical three year time frame from these novel viruses to establish themselves in the general population.

Looking at the recent adverse response mortality numbers from other countries the total number of deaths due to the SARs CoV 2 vacine must already be in the 1200 to 1400 range. And will probably top out around low 2,000’s

Is that for Ireland or Europe?

Just Ireland. The Europe numbers are well over 10K and some countries are very slow reporting deaths. It around 5K in VAERS in the US this week and as VAERS has about a 80%/90% historical under count rate so multiply by about 8x at least.

So thats 50k/60k range so far. In US, UK and EU. Mostly from immediate adverse effects. At least 50% are very old frail people but at least 25% of the US number now is under 50.

The final take up will be about the same as the annual flu shot. Which kills maybe a one or two hundred worldwide every year. Almost all very high risk people in very poor health.

Then it appears, if I read your words correctly, more people are presently dying from the injections than any virus in Ireland.

The Europe numbers are well over 10K and some countries are very slow reporting deaths. It around 5K in VAERS in the US this week and as VAERS has about a 80%/90% historical under count rate so multiply by about 8x at least.

The current combined reported figure for USA/Europe is running close to 17,000 dead, apply all the other mitigating factors and that figure may gain a zero or more.

Call to Action: Politicians now Speaking Out Against Unjust Laws - Help Them Now! 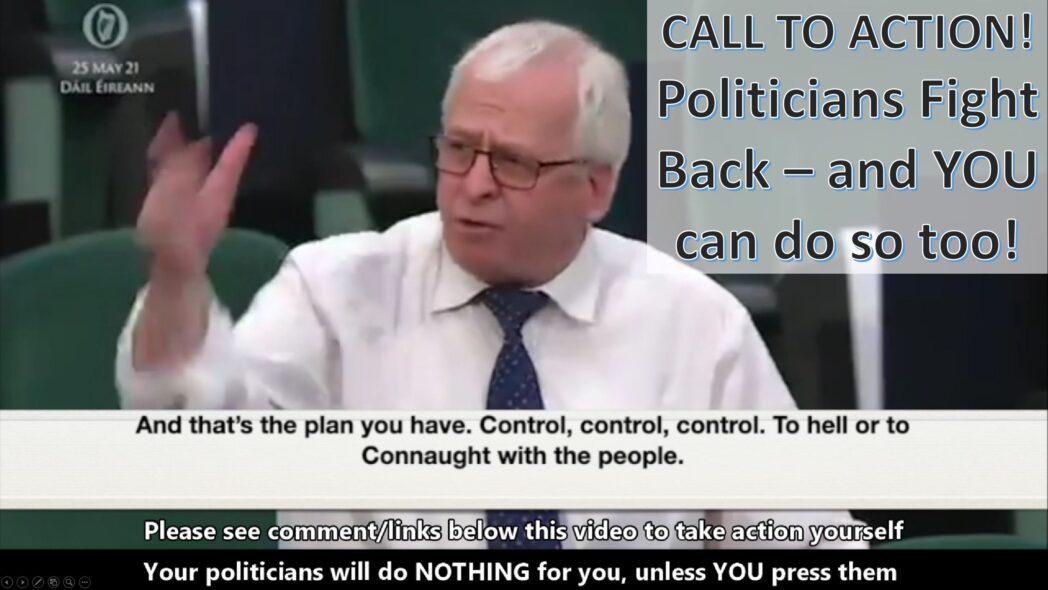 Politicians are now Speaking Out Against Unjust Laws - Help Them Now!...

It's now or never. The time has come for Ireland's Citizens to stand up for justice, democracy and our inalienable rights & freedoms.  On or before June 9th, the truly despotic and draconian emergency laws will be rolled over for another 6 to 9...

Can’t
seem to play it

Irish Media the Envy of China

After the HSE confirmed half of all adults have received at least one jab so far, Dr Henry said the “uptake of this vaccine has been astonishing”…

…On the target to have 80 per cent of adults vaccinated by the end of June, Dr Henry said “it is hard to say” that it will definitely be met because of supply difficulties.

Uptake of Covid-19 vaccines in Ireland the ‘envy of Europe’

Even the Bloomberg illustration in the breaking news link confirms what napkins users have known for a long time in this thread, that it will take years at the rate to hit the full sales target often referred to in the bought and paid for media as “fully vaccinated”:

Open_Window posted about 26 days ago:

A quick back of a napkin calculation, indicates for the Provid Regime to hit 100% it would take nearly 3 years at current rates rate, so approx. 2 years or so to get to 70/80% target, which the Provid’s set for Sept 2021, then brought forward to June.

It’s a long slow road to hit the vaccine sales bonus, which is like many eternities in politics.

The booking portal for getting vaccinated will open to 40-45 year olds later this week, he added.

The latest data on the number of vaccines administered in the Republic have not been available since the cyberattack on the HSE.

However, speaking to Newstalk, Dr Henry said: “We are seeing levels here of uptake and engagement and enthusiasm that is the envy of the rest of Europe, and we are seeing the results of it come through in the collapse in the number of cases , the collapse in harm that is caused among vulnerable people.”

The ability of the virus to cause harm has “certainly significantly reduced”, he said, adding: “We’ve really given this virus a kick in the you-know-what.”

We are selling levels of or market sentiment that ensure a soft landing.

'The drinking starts from 3pm': Dublin businesses intimidated by stre…

Perhaps they have heard tell of Dublin in the 90’s and feel a form of cultural homage is a perfectly acceptable, since their parents probably enjoyed such liberties.

Dunno why they keep arresting FOURTEEN people in Dublin every night.

A post was split to a new topic: NOTICE OF LIABILITY FOR HARM AND DEATH has been served to the Irish Government 24/05/2021

A little recap on Leo’s predictions form early May this year, which would have been based on the plan they were handed since the very beginning.

I wonder how that plan is going.