Ha! That headline changed fast, no more hiding for the day so.

… “The trajectory of the diseases has taken a wrong turn,” Mr Martin said. “There has been what was described as a sudden increase in the last week of case numbers. I think we’re looking at over 2,000 case numbers today.

Point of information: Their “cases” number jumped over 2000 a day, at least four times in August. That month alone they recorded over 52,000 cases, September over 41,000 cases.

Government thinking on COVID in one picture. 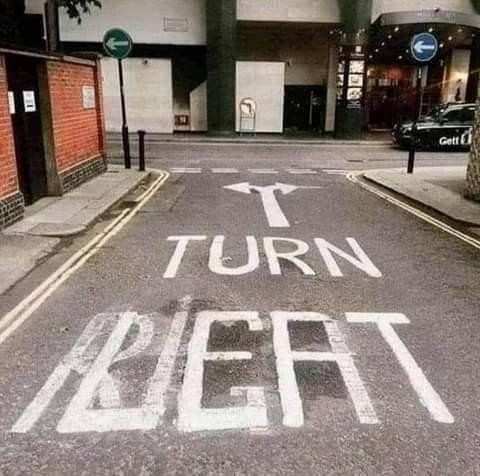 Minister for Finance Paschal Donohoe has said that it was “a little less likely” that there would be a widespread > return to the workplace on October 22nd.

The Government would have to “look very carefully” at the situation next week following a meeting with Nphet, he told Newstalk’s Pat Kenny show.

“We will have to see where we are with the disease.”

“some signs that were of concern”

“We need to ensure that we don’t step back.”

The virus was “unknowable and inherently unpredictable”

There may be a case “for going further” he added, with regard to the booster campaign. “We may have to do more with vaccines as we move later into the year.”

When asked about provisions in the Budget for Covid-19, Mr Donohoe said he would never forget the few weeks around last year’s Budget when he had to make plans in case of another lockdown. “The reality is that by June this year all of the funds set aside in last year’s Budget were gone” which was why he set aside further funds in Budget 2022.

“You never really know what’s around the corner.”

The recent rise in Covid infections is a “warning shot”, the Minister for Foreign Affairs has said, amid increasing doubt within Government on plans to remove almost all restrictions in just over a week’s time.

The Cabinet is due to evaluate advice from public health officials next week to decide if remaining restrictions can be eased on October 22nd as planned.

“Sometimes Government has to make the right decision even if it is unpopular,” Simon Coveney told Newstalk radio.

"Speaking in the Dáil on Thursday, Mr Varadkar said that if everyone was fully vaccinated there would be “no question” about easing restrictions.

Kites flyin’ high you know how I feel

Oh you’re “considering” my liberty. Cheers for that! 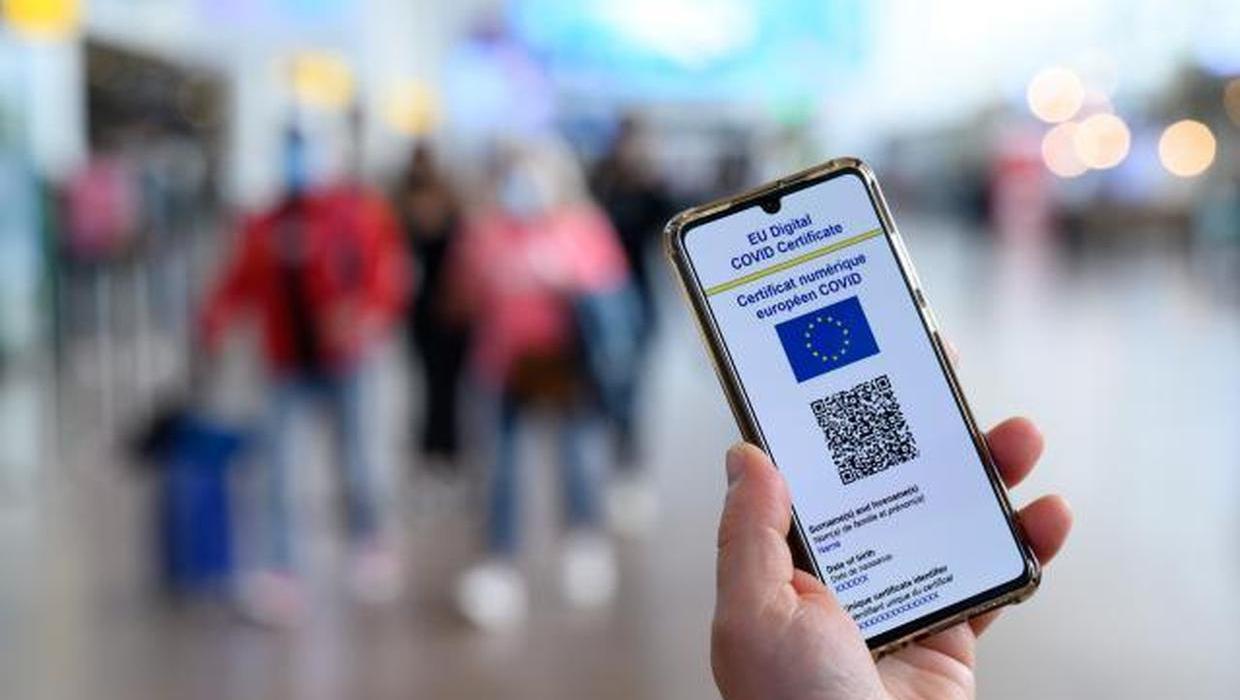 The use of Digital Covid Certificates for indoor hospitality may be extended beyond October 22 due to increasing fears over the spread the virus ahead of the next stage of easing restrictions.

Sinn Féin leader Mary Lou McDonald called on the Government to do everything they could to provide clarity to sectors expected to reopen on October 22nd.
“All of us need to use our cop on”, she told RTÉ radio’s News at One.
The experts had consistently said that there was a need for caution and not for panic, she said and any decision on the easing of restrictions on October 22nd had to be mindful of public health advice.
At the core of the problem was public health provision and the real dilemma, she said, was that the Government would not resource the health service.

A further 1,627 cases of Covid-19 have been confirmed, with the Government not currently considering a return to increased restrictions or lockdown.

The lifting of most remaining restrictions on October 22nd is in doubt amid rising infections and hospital admissions.

The Hamster wheel has opened up a vortex.

The cabal would have us believe that we are in a similar spot to that which we were in this time last year, this could not be further from the truth.

Lets have a look at Last year.

Published on 14 October 2020
As of 2pm today, 232 COVID-19 patients are hospitalised, of which 30 are in ICU. There have been 9 additional hospitalisations in the past 24 hours
So after all the polava we are worse off than

Donnelly say’s he was advised of the following
He said: “Part of it is proximity to the UK, where the cases have been consistently very, very high and obviously we have an awful lot of movement between the Republic and the UK.”

Minister Donnelly said it is also partly down to “the starting point” of the vaccination campaign and it is in part due to “a stickiness in terms of the cases levels” this followed first out of traps .Pillip Nolan,speaking on RTÉ’s Today with Claire Byrne, he said that although the numbers are similar to this time last year, the dynamics are completely different.
I accept that England’s proximity to Ireland has not changed because if it had Ryanair would of told me however If I am to assume that Prof Nolan’s statement that the dynamics are completely different, is correct I must query the dynamics in totality (Claire Byrne won’t).
Basially they have failed but was it all just a case of building the data base back better.
I suggest it is the Government that is on a knife edge and nobody else.

Blaming the UK for the dismal figures here smacks of real desperation to divert from the fact that they’re Just another king Knut who hasn’t seen the light yet.

Imagine if Sajid said,The reason why the UK has a bad dose of the pox is it’s proximinty to Ireland. you’d never end of.

They really blew it yesterday. The game is up.

Never seen such a frenzy in the bought and paid for media, they couldn’t change the headlines fast enough until they rest on the faux-rollback of “no change”. Rollback Friday is being deployed, let’s see how it progresses.

There is a peaceful walk from the Garden of Remembrance to the GPO on the 23rd. I hope you can come & I look forward to seeing you there. 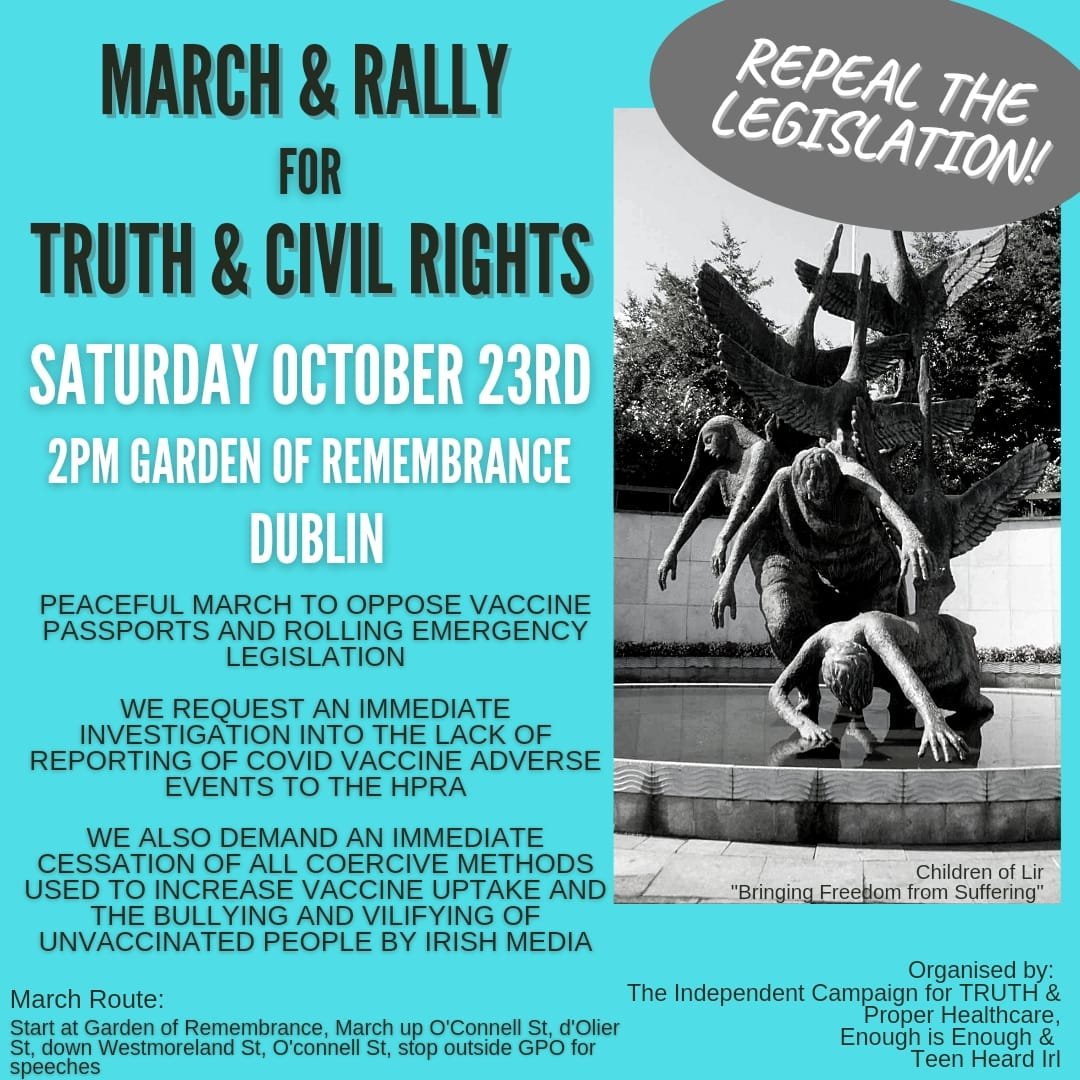 They really blew it yesterday. The game is up.

Never seen such a frenzy in the bought and paid for media, they couldn’t change the headlines fast enough until they rest on the faux-rollback of “no change”. Rollback Friday is being deployed, let’s see how it progresses.

Not at all. There’s not a single important person speaking out against the extension of Covid Certs here.

Yes there was a bit of panic and mismanagement of the message that it could mean a return to restrictions for the vaccinated. But they’ve now inadvertently brought “reversing the easing” back on the table - which they’ll use in the medium term. As well as reiterating “blame the unvaccinated” - they all got that memo.

Not at all. There’s not a single important person speaking out against the extension of Covid Certs here.

No. That’s not how the Free State works.

We’re not far from the unvaccinated being compared to IRA bombers killing innocents.

Italy is bracing itself for further unrest and labour market mayhem as the strictest vaccine mandate in Europe takes effect on Friday.

All workers will be obliged to present a coronavirus health pass before entering their workplaces, a move that is expected to leave some industries struggling with staff shortages.

Speaking to a guy from the NW of Italy this week who was delighted, as saw no other way to deal with the Neapolitan lot and southerners in general. 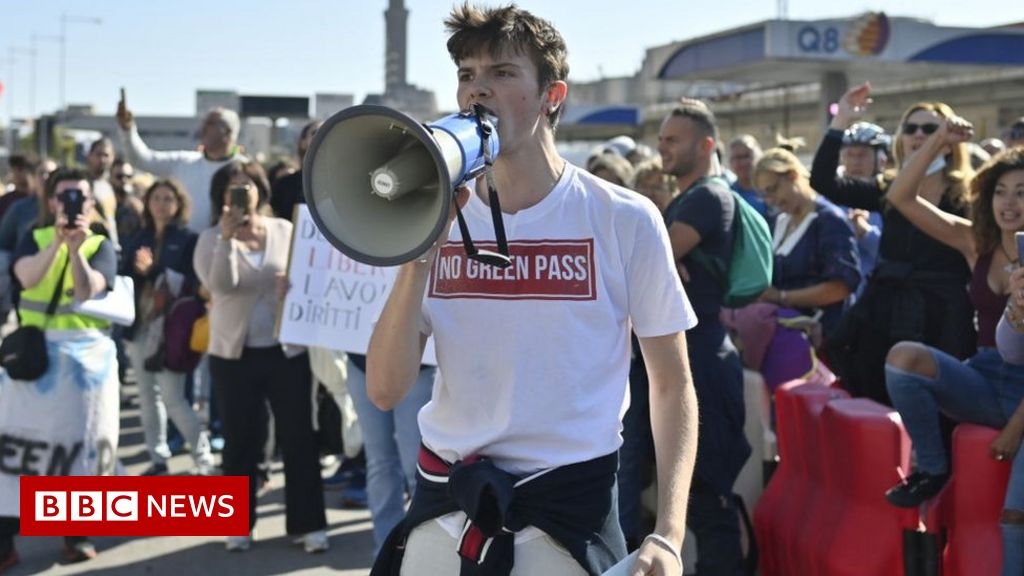 Thousands gather outside major ports, angry that the "Green Pass" is now mandatory for all workers.

Seems the apartheid system is getting entrenched not loosened.

Q&A: What restrictions are due to lift and what is the Government thinking?

What is happening with the return to workplaces, masks and household visits?

Are restrictions lifting on nightclubs?
This is a particularly fraught question. There are mounting concerns in Government that it could be a mistake to allow venues like nightclubs to reopen. On the other hand, there is a very real fear that if the reopening is put off, it may be hard to offer a definite date for a future reopening, particularly if the prevalence of the disease does not decrease and remains at the same level for weeks to come. This will be one to watch on Monday.

It will. They might see an apartheid system in nightclubs as a good incentive to raise the youth vaccination rate.