If something beyond your imagination does not occur States side soon, or does occur soon, either way the planned 4th Quarter Lockdown will most likely go ahead as planned since the island of Ireland has been infiltrated and taken over by WEF & Co full root access.

What signs or scenario indicate it’s coming (it is)?

What will you do to prepare?

I’ve been buying food. Bought some camping gear. Will keep getting some more firewood & candles in case power goes. Keep meaning to exercise & get fitter, Wondered about solar chargers for iPad iPhone, doubt I’d know how to set up big panels for a home grid for main computer and besides, I’m urban, would look very odd.

Wondered would I buy a hovel in the country, I’ve a small nest egg but 5 figures doesn’t get you much, then there’s living expenses.

Or a boat and head west, but don’t know the land or have many contacts over there.

Really don’t know. Lockdown is one thing, I can manage that again. I think. If they start coming for the unvaccinated though… I’ve been vocal. I must be on a list.

Course if there’s societal collapse, climate change or a micronova on the way, I’m not the right sex or age-bracket for survivability. Feeling very down with all the vaccine passport talk in so many countries. France is cheering me up a bit, but otherwise lots of black pills.

I’ve had a working assumption for months now that there will be further lockdowns through the September to April period.

So get a haircut before mid Sept, visit the elderly as much as possible at this time, get DIY products and jobs done ahead of the winter, get home furniture, items you need to see in store ahead of September. We’ll be turned into a nation of preppers yet…

Latest from the Rumour Mill Papers on Speculation St. is advising August thru to October as the next power grab is sprung under the guise of a “pandemic led lockdown”, this time harder and with threat of force, “army”

As observed earlier, all the expectations and rumours of last year that did not transpire last year, more or less all happen this year. You have to say it’s clever in a very evil way, create a “rumour fatigue” in people, while you demoralise them relentlessly. 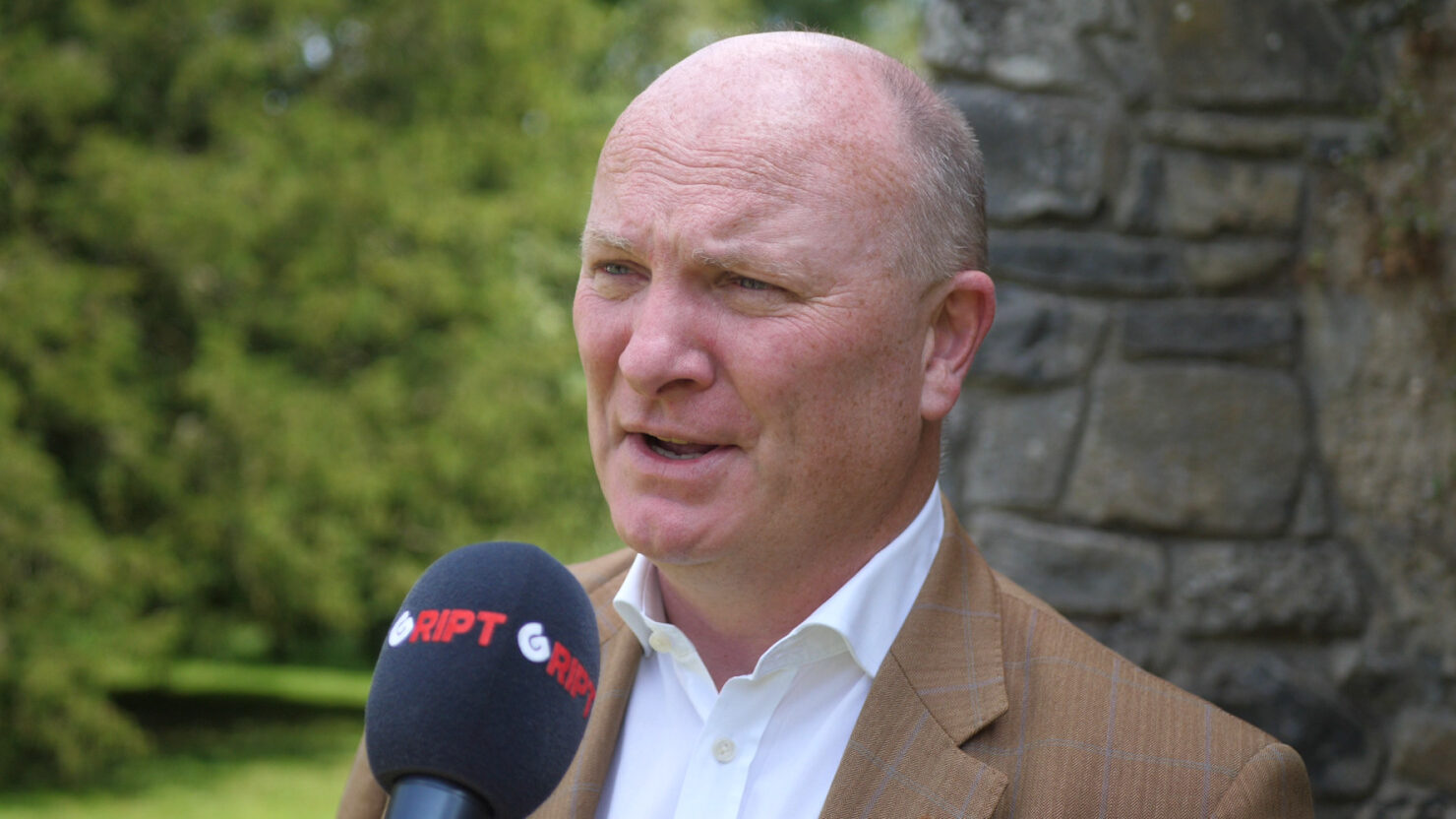 Ganley, who is a CEO of communication giant Rivada Networks, spoke frankly during an exclusive interview with Gript.

Nearly forgot. Reports like this in the U.K. for a week now.

Warning to people shopping at Tesco, Asda, Aldi and Lidl over 'next three weeks'

Richard Burnett, chief executive of the Road Haulage Association, said the country is “facing a collapse” of the food chain.

It won’t be that bad, after all, some people still have a garage full of bog rolls.
Stories like this are more likely to become self-fulfilling prophesies if people buy the type and panic buy.

Eh these warnings, the early warnings were already coming this time from the sector itself. For a variety of reasons. Inflation and lack of workers being two, here is the dedicated thread from June, Food Shortages - Happening now or very very soon? 🍌

No one really gives a fiddlers about lockdown, it’s about the desired outcome from harder measures, the further attempt to demoralise entire nations and have them submit to a global tyranny and remember, you are not cared for, they do not care fo you or your family. You’re already dead in this plan.

I’m almost thinking some people believe they’re still in the first two weeks of this part of the plan.

It’s been lies of a type since inception.

Almost 50 Years to the Day. Will we see it again for the Free Injected Peeps ;
9‭ August 1971: The launch of Operation Demetrius on this day- Internment without Trial was introduced by the British in the North of Ireland. In early morning raids the British army and the RUC lifted hundreds of men throughout the North in what was a ham fisted operation. Their aim was to catch as many members of the IRA in their homes as they could in one huge swoop.

But the introduction of internment was a logical next move in the escalating War between Irish Republicans and the British. The IRA were already of the opinion that their enemies would once again use this tactic as they had many times in the past & thus most of the key leadership figures had already gone ‘on the run’ by the time the round ups began. In the 1920s, 1930s, 1940s, 1950s and 1960s republican suspects had been imprisoned without trial by the British Government, but this time the exercise was to blow back in their faces.

What the British did not predict was the high level of resistance they encountered in Nationalist areas as men young and old were dragged away by the Crown Forces in full view of their terrified families.‭ There was widespread anger and within hours rioting had broken out in many areas. It quickly became obvious that the exercise was a huge fiasco and one with deadly consequences.

‭Relying on outdated lists containing‭ 450 names provided by the RUC Special Branch, the British Army swept into nationalist areas and arrested 342 men. Within 48 hours 116 of those arrested were released. The remainder were detained at Crumlin Road Prison and the prison ship ‘The Maidstone’ in Belfast Harbour. Hundreds were injured in the rioting that followed and 12 people were shot dead that day – 2 British Soldiers, 7 Nationalists and 3 Loyalists.

The British Government had focused the entire strength of their Armed Forces on one community in the North and it was obvious to all as to whose side they were backing‭ – ‬a strategy even they had some qualms about but went along with to placate the Stormont Government of Brian Faulkner.

What they did not include was a single Loyalist.‭ ‬Although the UVF had begun the killing and bombing, this organisation was left untouched, as were other violent Loyalist satellite organisations such as Tara, the Shankill Defenders Association and the Ulster Protestant Volunteers. It is known that Faulkner was urged by the British to include a few ‘Protestants’ in the trawl but he refused.

The introduction of Internment without trial was a watershed moment in the history of the conflict that drove a large section of the Nationalist population in the North into open revolt and many more into a deep sense of alienation from the British State and it’s Armed Forces.

Still on the table.

NPHET to examine data amid concern over rising cases

Concern has been expressed at a meeting of the Senior Officials Group on Covid-19 today, about whether latest figures on Covid-19 represent a blip or a trend, RTÉ News has learned.

Ha! That headline changed fast, no more hiding for the day so.

Taoiseach Micheál Martin said he cannot guarantee that the planned date of October > 22nd to lift remaining Covid restrictions will go ahead.

He spoke after a meeting of senior officials on Wednesday morning, during which the deputy chief medical officer Ronan Glynn made a “serious” presentation.

“The trajectory of the diseases has taken a wrong turn,” Mr Martin said. “There has been what was described as a sudden increase in the last week of case numbers. I think we’re looking at over 2,000 case numbers today.

Well just to prove everybody is not on the same page

Mr Henry warned that the virus remains a threat to those who have not been vaccinated.

Acknowledging the high uptake rate, he added: “It’s not high enough and if you look at the remaining percentage that are not vaccinated, the eligible population is about 8%.

Leo Varadkar told a meeting of the Fine Gael parliamentary party that the Covid metrics are “worrying and going in the wrong direction”.

He said that 300,000 adults have not taken the vaccine and while this is a personal choice, “those choices have effects on other people.”

I believe neither however I think all factions concerned should make a concerted effort to RTFM.

The last people to remain unvaccinated against Covid-19 are having a “disproportionate impact” on the profile of the virus in Irish hospitals, the deputy chief medical officer has warned.

Dr Ronan Glynn said around 370,000 people have not yet been fully vaccinated.

He said just under 300,000 adults have not come forward for vaccination and a further 70,000 people have not received their second dose.

“There has been fantastic uptake of Covid-19 vaccination over recent months,” Dr Glynn said.

… but it’s not enough because they always wanted 101% but they never told you.

“Unfortunately, there are still just under 300,000 adults who have not come forward for vaccination and a further 70,000 people have received just one dose of a two-dose schedule.

Yea, could be more too.

Forgot the headline of that last piece, gettin’ the boot in now, cause he knows the truth:

We find ourselves in a worse position than countries that locked down less – or hardly at all – and who have fewer people vaccinated.

The gap has been there for months now, but has never been adequately explained.

This “Dr” Henry guy should be disbarred as a medical fraud as he obviously has no actual medical knowledge of how infectious diseases spread. Or how vaccines work for that matter. Or did they not teach that stuff in UCD.

Or maybe he is just a bare faced liar.

The only possible threat through epidemic spread to the unvaccinated is if the vaccine does not actually work. So what is it Colm. Either you dont know the base vaccination rate for a low attack rate R0 < 1.2 is not > 90% but < 50%. So no community spread above 50%. Or else the claimed vaccine efficacy rate is a total lie and is even worse than the flu shot. In which case it does not matter what the vaccination rate is because we are well into placebo efficacy territory with such a low attack rate and very low general population CFR.

Or there again maybe this bullshit artist actually does know that the main transmission route of SARS 2 are HSE hospitals. its a HAI, and they want to get everyone vaccinated in case they have any direct contact with a HSE hospital or health care facility where the might actual get a real infection. .

That would be par for the course when it comes to HSE coverups and lies. They have decades of form.

There again even if everyone in the country was vaccinated and the vaccines was 99% effective they would still get several thousands new “cases” every day due to the fact that the COVID screening test used has no clinical diagnostic validity. It just a random false positive generator.

Either way he is a medical charlatan. And in a country with a functioning legal system he could be sued into the poor house for what he has done. Sooner or later.

They really need to eliminate the unvaccinated control group. That’s the aim now. No significant chunk of unvaccinated, healthy people can be allowed persist. From a propaganda war perspective unvaccinated, obese diabetics with heart disease are not a bad thing.

https://archive.is/jTsrs
Just wait until you see the weird studies that are going to be done on unvaccinated young people in the next 5 years. e.g. someone will show that they just look healthier and more attractive, brighter eyes, sexier scent or something that will appear bizarre at first sight.

From September the 1st…Waterford tops the list of rates of vaccinations by county…. 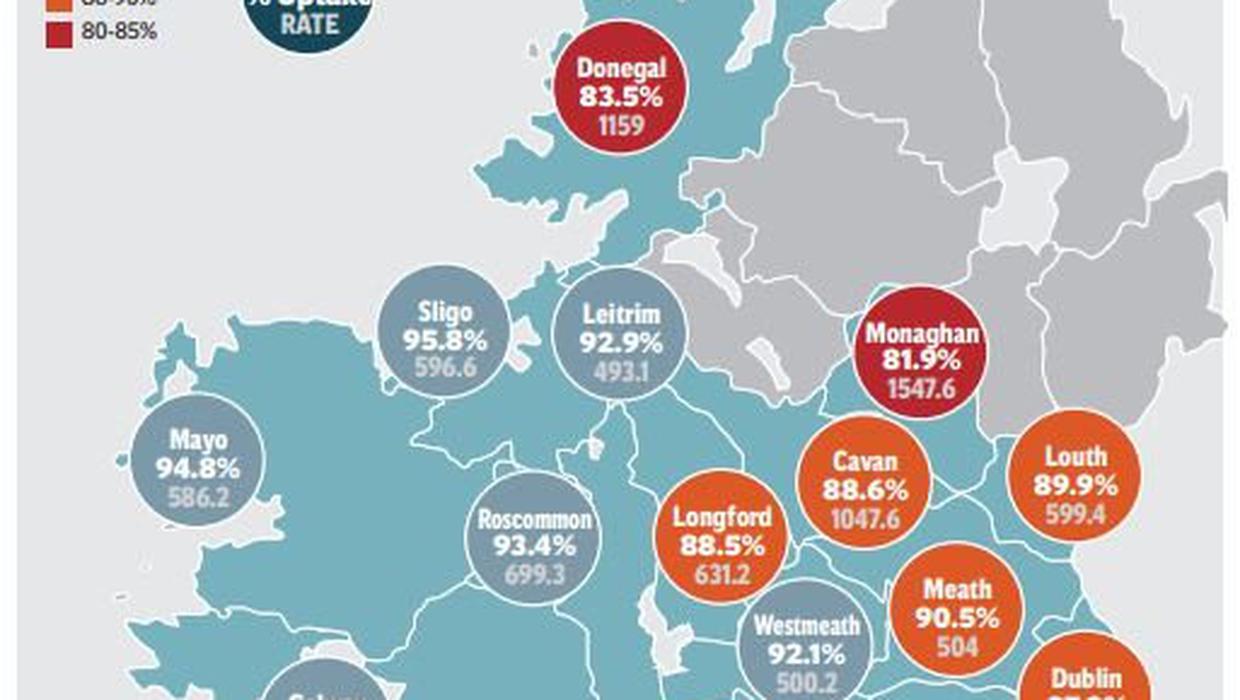 Revealed: the counties with worst and best vaccine take-up

Counties with the lowest vaccine uptake have some of the highest rates of Covid-19 in the country, the Irish ­Independent can reveal.

13th of October, GP states ‘no single reason’ for Waterford having highest incidence of Covid-19 nationally

No single reason for high number of Covid-19 cases in Waterford, says doctor

GP in Kerry questions if ending of restrictions premature