A look at cash buyers in Ireland

Cash buyers: Who are they and how come there’s so many of them?
Central Bank chief Philip Lane says cash buyers limit ability to control house prices
irishtimes.com/business/per … -1.3224402

If they only accounted for about a fifth of the market or so, as was typically the case, it may not be so much of an issue, but figures show that more than five in every 10 purchases in the residential property market is by a cash buyer.
It’s a startling figure when considered in an international context. In the UK for example, cash buyers account for around 35 per cent of all transactions, up from 20 per cent in 2005-2006, according to Nationwide, while in London, cash buyers now represent just 19 per cent of the market…
…Before the crash, cash buyers appeared to be in more scarce supply. Figures from the Central Bank show that at the pinnacle of the boom in 2006, cash buyers accounted for about 25 per cent of the 151,000 or so annual transactions. Back in 2000, there were about 28,000 cash sales out of a total of about 102,000 or about 27 per cent.
But, as transaction levels plummeted, the proportion of cash buyers soared, reaching a peak of about 63 per cent in 2013…
…“It’s a bit bouncy from quarter to quarter, but on a four-quarter moving average basis, you can see that it is gradually tapering, very very slowly,” says John McCartney, director of research at Savills.
From that high of 63 per cent in 2013, the proportion has most recently dropped to about 53 per cent.
https://www.irishtimes.com/polopoly_fs/1.3224939.1505724924!/image/image.png
…Last year, some 89 per cent of investors bought entirely with cash according to Savills figures, “and if you went outside Dublin it would probably be even higher”, McCartney says.
…But what about all the investors who we hear are leaving the market due to the stringent costs of running a rental property?
McCartney doesn’t beat about the bush on this. “It’s a load of crap,” he says, adding that such a line was “self-serving” and was put out there to “effectively lobby the government against rent caps” – which didn’t work.
…Savills figures show that, in the second quarter of 2017, some 11 per cent of cash buyers were first-time purchasers.
Lowe has observed that more parents buy properties for their children to live in while they attend college in towns and cities around the State, while others may be cash-rich returning emigrants.

An interesting article on the cash buyer phenomena in Ireland. Some stats to backup the previously largely anecdotal evidence though this is mainly from just 1 EA.
But one things for sure, there’s still an awful lot of cash out there despite the record crash this country went through.

Interesting… Cash buyers buying investment properties seems bizarre given the taxation regime on rental income unless of course they’re cash rich but income poor and would not be taxed at the marginal rate, i.e. retired or semi retired.

Could also be a trend amongst wealthier families to buy properties for children for college years given the current rental mess.

The big question I’d have is whether institutional investors would be considered cash buyers and if this is accounted for in the data?

Would like to see the foreign, non-REIT element of this. Chinese flooded Oz, NZ & Canada to get money out of government reach. UK was also a target. To get a visa in the UK, they had to invest something like a million which was then doubled.

The number of UK visa applications by wealthy foreigners has collapsed after the government doubled the required investment threshold from £1m to £2m late last year.

In the first nine months of 2015, there were just 136 applications for “tier one” investor visas, for which residents from outside the European Economic Area and Switzerland can apply provided they have access to at least £2m in investment funds. This compares with 780 applications over the same period last year, an 83% decrease"

Ireland was the next target as it was cheaper and in the EU. We also upped the amount but it’s small fry compared to UK.

A total of 329 individuals from 16 different countries applied in 2016 to secure Irish residency in exchange for investing in Irish assets. Of this figure, 313 were from China…
…
In order to be considered investors have a choice of investment options: €1m in an Immigrant Investor Bond, at 0pc interest rate; €500,000 in an Irish enterprise for three years; €500,000 in an approved fund; a minimum investment of €2m in an Irish Real Estate Investment Trust; investment in a residential property of a minimum value of €450,000 and a straight investment of €500,000 into the immigrant investor bond - or a €500,000 philanthropic donation or endowment."

Interesting… Cash buyers buying investment properties seems bizarre given the taxation regime on rental income unless of course they’re cash rich but income poor and would not be taxed at the marginal rate, i.e. retired or semi retired.

Could also be a trend amongst wealthier families to buy properties for children for college years given the current rental mess.

The big question I’d have is whether institutional investors would be considered cash buyers and if this is accounted for in the data?

Per mortgage lending falling off a cliff thread:

Let’s take the lending figures against the volume of transactions as per Propertypriceregister to indicate the cash purchases.

I still maintain they need to look at the CGT exemption. Bring it forward to the first & second year eligible now. We are building up to a lot of supply coming online in 2019 between the great land give away and CGT 7 year holders. There is no reward to government in holding on until 2019. Maybe, even offer to allow the 7 year holders liquidate now at 5/10% CGT.

Does anyone know, if someone borrows from abroad, does that get recorded here ?

Does anyone know, if someone borrows from abroad, does that get recorded here ?

I’d presume if the loan is secured on a particular property * it has to be done via a regulated financial entity and would be but if a fund/HNWI borrows abroad for general [company] funding it wouldn’t be? 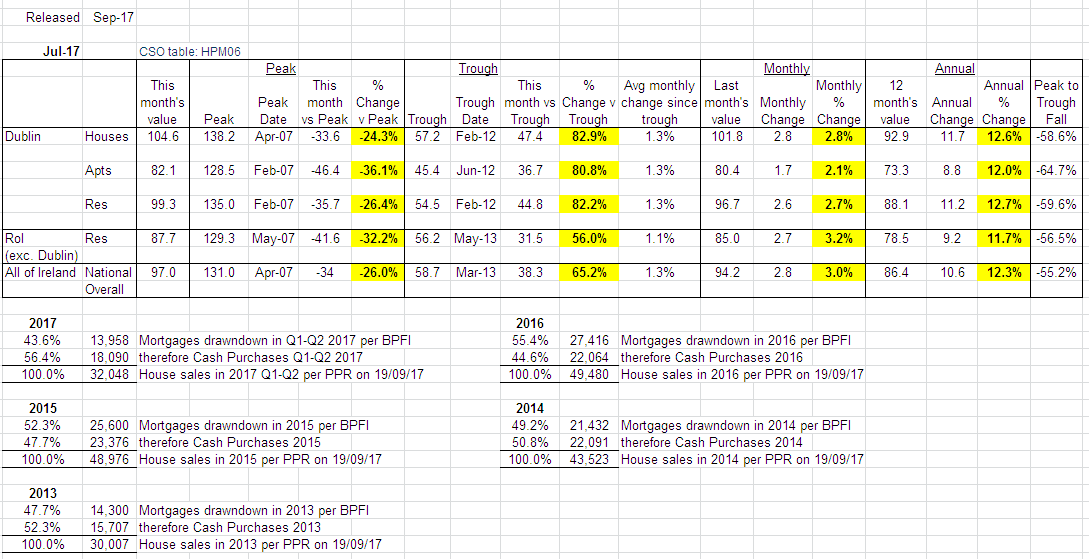 Modest homes are seeing the biggest price rises, with cash buyers more likely to snap up cheaper properties than dearer ones.
This is mainly because cash buyers are more active in the lower-end of the housing market, pushing up prices of smaller homes in less desirable areas.
This means there is a limit on the ability of the Central Bank’s lending rules to control property prices, a study by an economist has found.
Cash buyers can represent up to half of all purchases of residential properties.
These buyers include corporates and non-government agencies. They also include householders using equity from their home, or a bank deposit, to finance the purchase of a buy-to-let.
Mortgages fund six out of 10 purchases in Dublin, but just four out of 10 purchases are funded by a mortgage in other parts of the country…

…Central Bank economist Mr Gaffney found that the lending limits have less impact on modestly priced houses where cash buyers are prevalent.
However, the lending limits are acting to hold back prices at the higher ends of the property market, where people have to use mortgages to afford a home.
This means there is a “structural limit” to the impact of the Central Bank macroprudential rules on property prices

…Central Bank economist Mr Gaffney found that the lending limits have less impact on modestly priced houses where cash buyers are prevalent.
However, the lending limits are acting to hold back prices at the higher ends of the property market, where people have to use mortgages to afford a home. This means there is a “structural limit” to the impact of the Central Bank macroprudential rules on property prices

We know cash sales have been declining relative to mortgages in recent years but the Indo today suggests we are approaching a normal market in that respect:

cash sales have diminished (from 27pc to 19pc in the year)

independent.ie/business/per … 57508.html
The Central Bank restrictions are biting also at the lower end of the market: an Estate Agent’s Index shows no price increases for 3-bed Semis during Q4 2018 in about half of all areas in Ireland.

Overall, the average house price across the country rose by 4.6pc in 2018 - indicating that the market is continuing to steady after an 11.3pc overall rise in 2017.

Overall the price of a three-bed semi-detached house in Dublin city has increased by just 1.6pc in the last 12 months as the Central Bank’s borrowing rules increasingly define affordability in the housing market.

Does the Indo congratulate the Central Bank on taking the steam out of the property market and keeping house prices within reach?

In fairness, the Indo might have a point about seasonality which seems to go beyond the traditional slowdown:

This is an end-of-year paralysis caused by an artificially created slowdown in mortgage lending, particularly as people tend to wait for the new year and a new chance at exemptions to strict lending rules.

But it doesn’t occur to the Indo that the banks should simply spread these exemptions over the full year.
Brexit is also blamed of course, but this is a complicated way of saying the British buyers are scarce:

In holiday home areas, such as Killarney and Bantry, buyers over €500,000 are hedging their bets on a rise in sterling if there is no hard Brexit, which could give them a 15pc increase in value.