The Taliban have banned the Covid vaccine in east Afghanistan’s Paktia and put up a notice in this regard at Paktia Regional Hospital, Afghanistan-based radio and television platform Shamshad News has reported. The region was captured last week when they allegedly removed Nishan Sahib from a gurdwara in the province.

Afghanistan's ambassador to Turkmenistan Khan Wali Khan Basharmal has on social media announced that he will be leaving his position for one week to represent "my people as an honorary ambassador of the people of Afghanistan".

We are saved. Where is the nearest Afghanistan Embassy?

Not really, expect a wave of Afghan refugees to arrive soon enough

Well the one upside is that the Biden regimes utter incompetence in Afghanistan, the WH ran it past no one first before announcing it, seems to have made some very serious enemies in the TLA’s.

The end in South Vietnam took 2 years. In Afghanistan less than two weeks. The TLA’s were not only blindsided but have suffered a catastrophic defeat and loss of men and resources. Far far worse than Vietnam in 1975. The debacle is so complete that its more like Dunkirk in 1940 than Saigon in 1975.

It looks like the TLA’s have lost almost everything in theater because the WH blind sided everyone. So no plans had been made to extract people and material at very short notice Would not be surprised if the TLA sig-int equipment hardware losses on their own top $1B

This has all the makings of a Singapore 1942 movement for the US’s international standing. It really is that big. The British Empire ended on February 15, 1942. It looks like August 15,2021 may have the same long term importance for US Imperial pretensions.

For those who might be happy about this turn of events, be very careful about what you wish for. Considering the alternatives.

Afghanistan is a tribal society and loyalty divides along these lines almost exclusively ie any outward buy in to western democratic systems of law and governance will only have been agreed to with a view to furthering tribal standing at a particular point in time.

As soon as the power dynamic shifts so too do the tribal allegiances that 90 percent of the population live their lives in accordance with. That’s why the Salmar Kameez will replace jeans and T-shirt’s overnight, as one commentator has stated is currently happening all over the country.

A British military officer who had spent time training the current Afghan army and police once explained that after months of training, as soon as ther first pay packet arrived, entire Afghan army units disappeared for a couple of weeks to walk back to their villages and deliver their money to tribal elders. He was predicting the current scenario as far back as 2011. And he wasn’t the only one ie people with experience on the ground knew the score.

The woke folk of the west have a lot to answer for. These people should be left alone to live as they have always done.

For those who might be happy about this turn of events, be very careful about what you wish for. Considering the alternatives.

Indeed. I probably don’t read it like anyone else. This is my read.

Menace power move in Afghanistan, regain stronghold, regain weapons etc impossible to resist lost so much means under Trump need to regain capacity - I think Menace forces (Taliban) with Menace financing (China) have been allowed walk into a trap.

Biden toddles off on holidays. Obama third term, This happens. Too smooth. Too quick. Too easy. Too obvious.

Active schism currently within in US forces - it took Menace loyalists to enable this “shitshow”. Menace US mil Loyalist have to move into light along with all other, smoked out, being watched.

Use Afghanistan for what it alway has been. The end of empires. Use it to end the Menace. The evil Squid empire lured into a massive Trap. 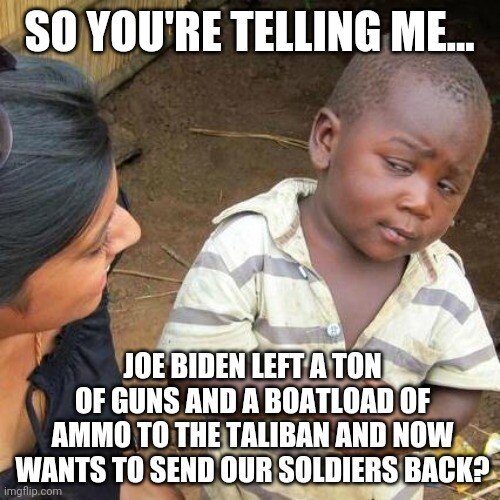 Shitlibs are concerned about what will happen to women and girls because of Muslim men in Afghanistan.
But when those Muslim men come rocking up in Europe the same shitlibs see only half starved refugees deserving care and love. If anyone points out they might also be a danger to our girls they get called a racist.
…And I know they can live with this level hypocrisy quite comfortably.

Theres a segment of Afghans who have aligned themselves with occupying forces, mainly urban, educated, of a more progressive outlook, mostly in Kabul. Such people must be very very worried at the minute. Hopefully they won’t be abandoned to their fate.

Indeed, it’s people like those that should be afforded international protection by Ireland and other European countries, rather than the bog standard Nigerian or Albanian and other con artists who have been the main beneficiaries over the past decade

I reject this.
The Taliban aren’t the Revolutionaries in this fight. The corrupt, westernized Liberals are the ones trying to revolutionize a traditional country.

The last thing I want in Ireland are a group of corrupt, well educated Muslims who would immediately ally themselves with the shitlibs here and all become spokespeople for more migration and a general absolute subversion of society. You’d get 50 Ali Selims.

Most of the Neocons were the sons of well educated Trotskyite social revolutionaries who fled Russia. Look at the damage they caused.

The Taliban aren’t the Revolutionaries in this fight. The corrupt, westernized Liberals are the ones trying to revolutionize a traditional country.

There’s likely truth to the suggestion that the Taliban are more representative of the general populace than the woke folk would want people to believe.

However, we’re likely to be getting a quota one way or the other. Assuming this is the case I’d suggest that it would be better that to be people who may have the tools to integrate or contribute on some level than illiterate villagers.

Having said that, the article from UnHerd that I linked to suggests that there may be resistance to the idea from within Europe. It certainly won’t be a repeat of 2015

It seems the situation is Kabul is catastrophic. Most westerners are trapped. Those who were paying attention got out in the last week or two. Those who were listening to the locals. Those who listened to the “foreign relations experts” or MSM journalists and stayed are fucked.

The US shut down the civilian airport for their own use stopping civilian flight leaving and the ambassador and his senior people were on the first plane out. Actually I dont blame the ambassador. Looks like Bidens people could not find anyone competent to take the job and the current guy stepped in to help out. Dont blame him for wanting out pronto when dumped in the shit by the WH.

Seems the Taliban have control of the city and the US is offering them huge amounts of money not to round up and shoot its citizens. One quote I’ve read is - the only reason the Taliban has not already shot hundreds of Americans today is because that decided not to. No other reason.

This is way beyond Saigon '75 in the depth of the debacle. Those short bits of film of the last helicopters out in 75 were mostly full of lower level SV regime people and hangers on. All the Americans were long gone as were most of the people whose life was in immediate jeopardy. It was not just the Hmong who were shipped out. About 130,000 SV civilians and military officers were given refugees status with large numbers of family reunion people brought out later.

So as I said, nothing like Saigon in 1975. Much much worse. At least 200K/300K civilians at high risk of being killed are being left behind.

Still reports on twitter & elsewhere, all saying that the speed has been crazy. I think some reporters had still been planning on going there to report the “fall” but it fell before they got there.

thread on twitter (who screencapped posts from somewhere else) can’t refind it. Some Brit went there on holiday, on actual holiday… return flight on the 19th. Maybe it’s a larp. But was posting on image boards of him in the market saying it’s fine, I’ll be out on the 19th then things on the thread change a little as the airport closed, can’t find embassy staff, then did a twitch stream, and I think he said he’s holed up with some Turks now. Can’t find it again now.

Nuts. Twenty-something year old who thinks he’ll live forever & talk himself out of shit. Or maybe a larp.

The speed can indicate one of two things. One side knows they have little time and are desperate. The other side sprung this trap without notice, element of surprise.

Yep looking at the noise out there this is real dark cauldron of black evil chaos being unleashed on the world. Helmets on! 🪖

I am watching the India press for what the I.S.I’s role is. The Indian press is good at publishing stories embarrassing to the Pakistanis. 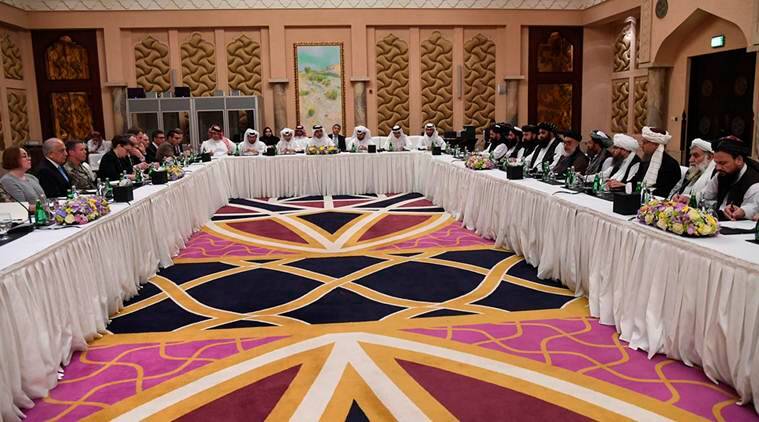 Once Pakistan’s pawn in Afghanistan, Mullah Baradar is now cast in role of...

Mullah Baradar was a Taliban leader Pakistan was keeping under lock and key as its winning pawn in the unfolding Great Game in Afghanistan.

Now its getting interesting. Multiple stories now leaked to press that Biden completely ignored all senior military and civil advice not to announce the pull out the way he did. The leaks against Biden are vicious . Leaks say Biden was obsessed by having a photo op on 20’th Anniversary of 9/11 to be able to say no US troop in Afghanistan. No other reason for his announcement of withdrawal. It was just for a photo op opportunity. This is classic Biden.

I smell a move to invoke the 25’th Amendment. Either that or they will need one hell of a false flag operation to distract from this complete catastrophe.

Trump did say that the Democrats talk of the 25th amendment might come back to haunt them.

Kamala making sure everyone knows she was in the room, tallies with @jmc A25, clearly comms. The op is rolling.

Every time the WH roll out Kamala it turns into a media disaster. The more people see her the more they dislike her. Unless they can get her out and a half way decent Veep in before the 25’th kicks in the Dems are looking at a total meltdown.

Cuomo is gone. The recall election is Cal is looking very bad for Newsom. Only the fake votes can save him now and they are not sure there are enough of them. Despite all the media hype about white supremacists and Anti Asian attacks, all the attackers are black apart from a few mentally deranged street junkie whites. The Asians are the deciding force now and they know which party wants to keep them down.