The Neocons are shameless, as always 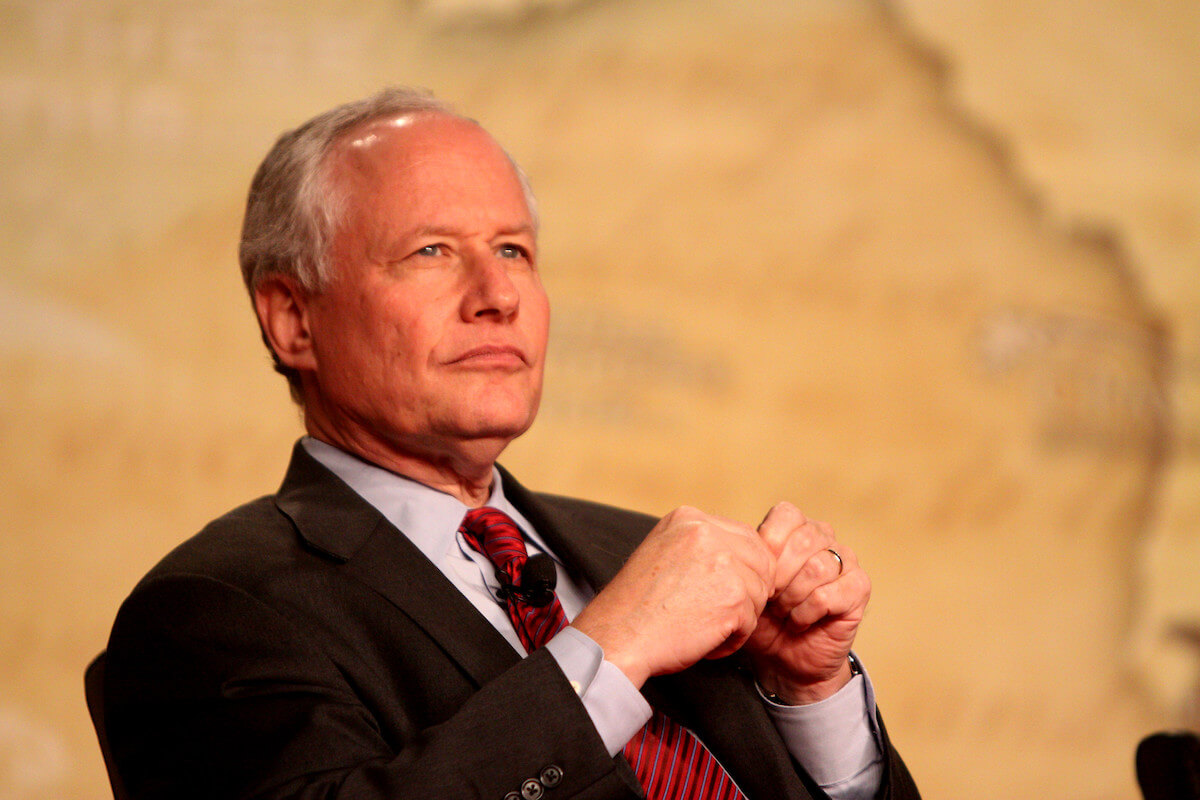 Neoconservatives seize on Afghan debacle to celebrate military force and ‘war on...

Neocons say Trump and Biden’s withdrawal from Afghanistan only proves the merits of their worldview: the military occupation of foreign societies works.

Bin Laden wanted Biden to be President. Because he was guaranteed to fuck it up so badly.

They want war with Iran now, and Biden is so dumb he might agree to it

President Joe Biden ignored British PM Boris Johnson’s attempts to contact him for approximately 36 hours as the Taliban cemented its control over Afghanistan, a report said.

Joe Biden is the greatest strawman the world has ever seen.

So they couldn’t deter the Russians in Crimea or Syria.

They’ve been routed in Afghanistan.

Numerous Middle Eastern escapades from Iraq to Libya have ended in varying degrees of chaos and some humiliation.

So what for America’s allies around the globe?

Taiwan has been spoken about at length. But what about India, Poland, Colombia and others? Are their interests best served allied to Joe’s America? What about the wider European Union? And has anyone even considered the position of Israel?

Iraq was a success, Syria and Libya too, if you still believe the party line about democracy and freedom, I can sell you O’Connell Bridge for a nice price

And has anyone even considered the position of Israel?

Iraq was a success, Syria and Libya too, if you still believe the party line about democracy and freedom, I can sell you O’Connell Bridge for a nice price

Maybe. But there’s surely only so many ‘allies’ you can abandon midstream before the rest of your pals begin to question the longer term benefit of your mutual relationship.

At some point it likely becomes more attractive to learn Mandarin.

But what about India, Poland, Colombia and others? Are their interests best served allied to Joe’s America? What about the wider European Union?

For Eastern Europe at the moment the American Special Forces are a critical asset that hasn’t been hollowed out by 30 years of diversity hiring and politicized promotion. It’s filled with very white guys. But if the woke mob decide to deconstruct that, which they’re mad enough to do, then places in Eastern Europe are going to decide they’re better off making friends with Russia.

Here is an interesting stat about the US army. Although around 15% black most of those are found in support and ancillary position. Not that many blacks in actual front-line fighting units. Less than 5% in most areas. Often lower. The whites do almost all the fighting (and dying) despite how many black officers you might see.

The only reason people like Gen Austin went into combat units is they knew there are so few blacks in these units that they would have very accelerated promotion due to race. No matter how incompetent. Which is why black quota officers like Austin are so despised by combat veterans. Some of his decisions while he was punching his promotion card by doing his time in Iraq were beyond stupid. The junior officers who did not want to get their guys killed just ignored his more stupid orders.

And Gen Milley is just some guy from the National Guard motor pool very good at shuffling paper and sucking up to politicians. And avoiding combat zones over the last 30 years. While a junior officer he did a great job of not being in places where people might shoot at him.

The one person who seems to be acting with some dignity is the UK Ambassador. Who arrived about 8 weeks ago. Story is he stayed behind at the Airport to deal with the Interpreter visas personally. To make sure they have at least some hope of getting out.

The British MoD/Army are now briefing against the Foreign Office. The internal wars are not just in Washington.

From the Sunday Times

The second incident, emblematic of the government’s internal problems, came late on Saturday last week when the British ambassador, Sir Laurie Bristow, was planning to leave Afghanistan with his staff.

Sources say a military officer told the ambassador it was inappropriate to leave soldiers to do the work of diplomats, processing thousands of applications from British nationals, and Afghans who had risked their lives to work with the British forces. “I don’t think so, do you?” the military man is understood to have said, staring down Bristoe “There was an eyeball-to-eyeball moment”, a minister said. “He [Bristow] had a change of heart.” As with everything in Afghanistan, the truth is more complicated. The decision for embassy staff to leave was originally made in a meeting that included the Deputy National Security adviser, David Quarry, that morning.

By evening the calculation had changed. A senior Foreign Office mandarin phoned Bristow and ordered him to stay. “It was pretty late,” a Whitehall source said. "“There was a flight preparing to take off.”

But the stand-off on the ground - and the briefing against the ambassador hailed as a hero on social media for staying behind to help those trying to get out - reveals the passion and anger that have divided Whitehall departments.

Lets see the FO told him to leave. He was just a stand in. Then the FO perm sec realized that if the FO did not have someone of the ground the squaddies would just wave everyone through and leave the FO with a huge political mess in the UK to deal with it later. So straight CYA and keeping control but the Ambassador did stay. He was well within his rights to leave. Like the French and German ones did. Ambassadors make great hostages but First Secretaries don’t

The ST story looks like the usual inter departmental leak war. But based on past history the FO have an illustrious history of tactical leaking going back to the Napoleonic Wars so this sounds like the MoD getting the boot in first. So business as usual.

The Brits at least did not leave their local embassy workers completely in the lurch. Like the Dutch , Swedes and it seems the Germans. And the US and Canada little better. And so far the only embassy on the ground that seems to have made an unconditional offer to get Irish citizens out is the UK one. The other EU countries being far from communitaire by the sound of it. The political paralysis in Berlin was so complete the staff on the ground had to unilaterally decided to start getting Germans out of harms way. Which is unprecedented in the history of the Bundesrepublik. German diplomats not waiting for orders.

Even Iran in 1979 was not this chaotic. Or Peking at the height of the Cultural Revolution when embassies were besieged and invaded by the Red Guard.

Thanks but no thanks

Remarks by President Biden on Tropical Storm Henri and the Evacuation Operation...

Roosevelt Room 4:19 P.M. EDT THE PRESIDENT:  Good afternoon.  After a series of meetings throughout the weekend with my national security team, I want to update the American people on our ongoing evacuation operation in Afghanistan. But first, I just...

I thought it strange that Biden namechecked a number of allies in his remarks, but pointedly didn’t mention or thank the Brits (the only others with troops on the ground). They’ve annoyed him and the Americans I’d say.

And I’ve been in personal contact with the leaders of many countries, including Qatar, Germany, Spain, Italy, the UAE, and others — they’re making vital contributions — to thank them for their support and to discuss how we can continue to coordinate our efforts in Afghanistan, moving forward. It’s the reason why I continue in contact with them

At the very end a journalist brings them up. I swear I saw Biden bite his tongue. He clearly hates him.

So, thank you all so very much. Thank you.

THE PRESIDENT: The answer is “yes.” It depends on the conduct.

You are going to get many thousands of Afghan refugees. By order of the Germans. How many thousand of refugees were the Irish government ordered to take in the last year?

There is one interesting angle to the ST story. The UK end was written by Tim Shipman. He has a very good nose for these inter dept battles so my guess would be is that the FO were trying to dump blame on the MoD and Shipman decided to throw a spanner in the works at the FO’s attempted spin. Shipman’s a traditional old style “Street of Shame” reporter so if he thinks the FO should be dumped in it then I’d trust his opinion. His books on the political infighting of Brexit sounded very plausible. He seems to work on the very sound approach when dealing with politicians of - “everyone is lying to me so lets find out who is lying least”.

Afghanistan isn’t our mess. We can’t afford the refugees. 240 billion in debt and young Irish people can’t afford houses. The refugees we have are in shit conditions in direct provision already.

The individual, who has not been identified by the Government, is on the national 'no-fly' list, which is designed to block individuals who are believed to be a threat from getting to the UK.

Is that why the Taliban are sitting back

There’s serious delusion in Boris Johnson and his advisors. All it takes is a few mortar rounds and the whole Airport is shut down. And he’s talking about “securing the gains”. He’s bonkers bonking boris.

I will convene G7 leaders on Tuesday for urgent talks on the situation in Afghanistan. It is vital that the international community works together to ensure safe evacuations, prevent a humanitarian crisis and support the Afghan people to secure the gains of the last 20 years.

We did it in obedience to an imbecilic political slogan about ending “the forever wars”,

Obviously the Neocons and hate the term Forever War.