When they’re not defending Pedo’s - Antifa target Tucker Carlson house, his petrified wife locks herself in the pantry and calls the police.

Some video at twitter link which may be gone any moment - twitter.com/RealAlexRubi/status … 12/photo/1

I hadn’t heard the chant in that video before, although Google tells me they used it at Berkely and elsewhere: “No border, no wall, no USA at all”. They really do want to dismantle the entire nation.

[The link contains a picture man with large wound to his forehead, swollen eye socket and pool of blood]

Going around beating up your elderly political opponents seems to be a terrible political strategy.
(Also in other news, AFD now want Dexit)

He published an article linking journalists to Antifa Wednesday morning
It’s Not Your Imagination: The Journalists Writing About Antifa Are Often Their Cheerleaders

Article about banning from yesterday including interview with Lenihan :
This writer exposed collusion between Antifa and the media and was mobbed for it

@johnp002 Just another day in the digit gulag - See if you or anyone, can guess who wrote this, without resorting to Google/Searching online!

May the best man win!

When someone interprets as derogatory almost anything that is said about him (or about groups with whom he identifies) we conclude that he has inferiority feelings or low self-esteem. This tendency is pronounced among minority rights activists, whether or not they belong to the minority groups whose rights they defend. They are hypersensitive about the words used to designate minorities and about anything that is said concerning minorities.

They seem almost paranoid about anything that might suggest that any primitive culture is inferior to our own.

Those who are most sensitive about “politically incorrect” terminology are not the average black ghetto-dweller, Asian immigrant, abused woman or disabled person, but a minority of activists, many of whom do not even belong to any “oppressed” group but come from privileged strata of society. Political correctness has its stronghold among university professors, who have secure employment with comfortable salaries, and the majority of whom are heterosexual white males from middle-to upper-middle-class families.

Leftists tend to hate anything that has an image of being strong, good and successful. They hate America, they hate Western civilization, they hate white males, they hate rationality. The reasons that leftists give for hating the West, etc. clearly do not correspond with their real motives. They SAY they hate the West because it is warlike, imperialistic, sexist, ethnocentric and so forth, but where these same faults appear in socialist countries or in primitive cultures, the leftist finds excuses for them, or at best he GRUDGINGLY admits that they exist; whereas he ENTHUSIASTICALLY points out (and often greatly exaggerates) these faults where they appear in Western civilization.

He wants society to solve everyone’s problems for them, satisfy everyone’s needs for them, take care of them. He is not the sort of person who has an inner sense of confidence in his ability to solve his own problems and satisfy his own needs. The leftist is antagonistic to the concept of competition because, deep inside, he feels like a loser.

Leftists are antagonistic to genetic explanations of human abilities or behavior because such explanations tend to make some persons appear superior or inferior to others. Leftists prefer to give society the credit or blame for an individual’s ability or lack of it. Thus if a person is “inferior” it is not his fault, but society’s, because he has not been brought up properly.

Helping black people is not their real goal. Instead, race problems serve as an excuse for them to express their own hostility and frustrated need for power. In doing so they actually harm black people, because the activists’ hostile attitude toward the white majority tends to intensify race hatred.

Suppose you asked leftists to make a list of ALL the things that were wrong with society, and then suppose you instituted EVERY social change that they demanded. It is safe to say that within a couple of years the majority of leftists would find something new to complain about, some new social “evil” to correct because, once again, the leftist is motivated less by distress at society’s ills than by the need to satisfy his drive for power by imposing his solutions on society.

Leftism is collectivist; it seeks to bind together the entire world (both nature and the human race) into a unified whole. But this implies management of nature and of human life by organized society, and it requires advanced technology. You can’t have a united world without rapid transportation and communication, you can’t make all people love one another without sophisticated psychological techniques, you can’t have a “planned society” without the necessary technological base.

The answer is: Ted Kaczynski aka the Unabomber

US authorities released his entire manifesto - Industrial Society and Its Future while at large, I believe in an attempt to find him and it worked, possibly his brother recognised the writings or writing style and this is how they were able to apprehend him.

There is an excellent Netflix show about Ted called Manhunt: Unabomber.

It is fairly accurate, I believe one of the main detectives is a composite of several characters, but other that that it on the money. His manifesto was released to see if someone recognised the ideas.

What was done to that man was inexcusable, that he went insane is no surprise.

Absolute scumbags. The Portland major needs to be removed from office immediately.

The United States of America will be designating ANTIFA as a Terrorist Organization.

This appears to be a very well timed and tactical move, there is a lot more to it than meets the eye.

If ANTIFA are ear marked and classified as a Terroist group, then;

Is ANTIFA now fair game for the US military, anytime anyplace in the world, including all their assets and support networks?

Does this classification put ANTIFA in the “enemy combatant” category?

Does this draw in for example social media platforms into the same category, if they “knowingly” continue allowing ANTIFA retain their content on their platforms or use platforms for comms to organise riots and attacks on the US now or in the past?

Does it also require US allies around the world to both recognise and behave accordingly toward ANTIFA in their respective countries?

Does this set the stage for further mass arrests but on a scale that is far greater and even more global in reach therefore very public than anything thus far?

“Are you, or have you ever been, a member of ANTIFA?”

Recall BlackBlock / Antifa did this in Athens

A pregnant mother died when they firebombed a bank branch.

I think its disingeneous to imply that these guys are harmless Marxist professors and intellectuals.

Greece erupts into violence with three killed in bank blaze

Three people were killed in Athens today when protesters fire-bombed a bank during violent clashes with police over government spending cuts.

AFAIK, anti-fa are funded by George Soros, who was a student of Karl Popper.
Based on Karl Poppers ideas George Soros has created the ideal/philosophy of the "open society".

The paradox of tolerance states that if a society is tolerant without limit, its ability to be tolerant is eventually seized or destroyed by the intolerant. Karl Popper described it as the seemingly paradoxical idea that, "In order to maintain a tolerant society, the society must be intolerant of intolerance." In 1945, philosopher Karl Popper attributed the paradox to Plato's defense of "benevolent despotism" and defined it in The Open Society and Its Enemies. Less well known [than other parad...

IMHO, at the heart of these ideologies is a type of paternalism. A we know best attitude (& the public are stupid), which I think is anti-freedom. It would be better in my view to improve education, and promote civic responsibility in order to defend democracy.

Antifa are taking actions considered extreme even among their own ranks. On Thursday night in Portland, rioters surrounded a vehicle filled with passengers and shot at it, hitting one person inside. The driver was able to escape but the injured passenger had to go to hospital for treatment. In Oakland, two federal police officers guarding a government building were shot in an ambush drive-by. One was killed and the other has critical injuries. The following day in Seattle, masked antifa militants stole a rifle from a police vehicle before setting it ablaze. 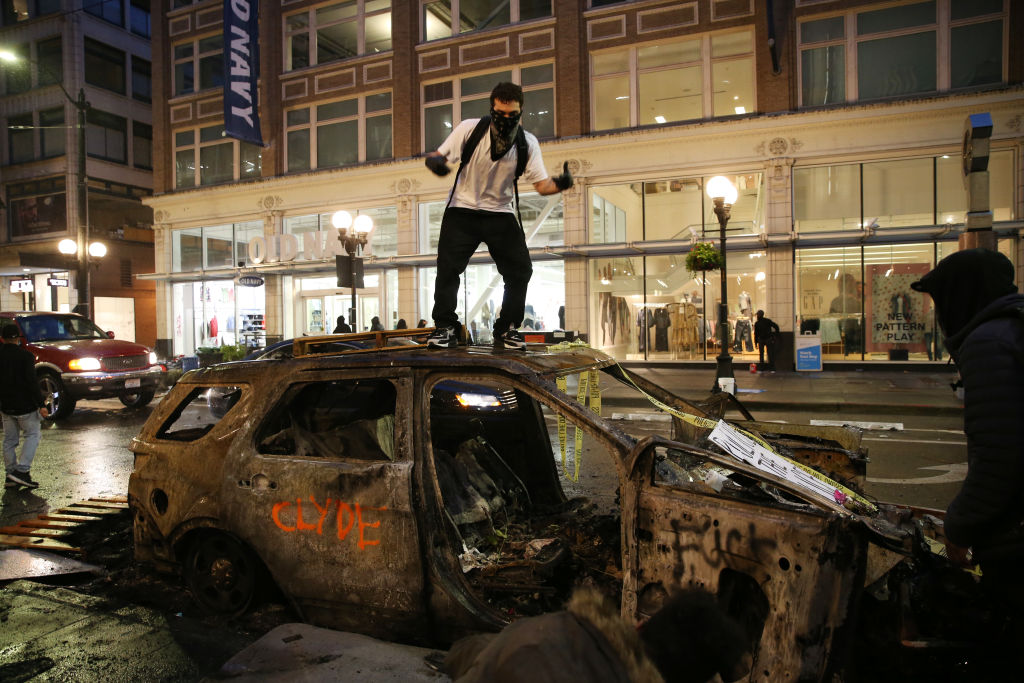 The following day in Seattle, masked antifa militants stole a rifle from a police vehicle before setting it ablaze.

Two things wrong with that - the minor one was that the vehicle was already burnt - I’m not sure how you identify the kid with the gun as antifa or hhow you know he took the gun out the vehicle. He appears to hand the gun over to the cop (and the guy is a cop) - his mates pull him away from the scene. Like all of this antifa stuff it’s so easy to pull it apart. I’m sure there are people who parade around as antifa and espouse all sorts of violence, just as there are ‘patriots’ in ‘militias’ who Donald Trump describes as ‘good people’. To me they are all the same - petty thugs who take advantage of dangerous situations for their own ends. This kind of crap has gone on for over 50 years - read about the Watts riots and how that started - how everything was apparently done by ‘communist agitators’.

MM: That quote was lifted directly from the article above.

Watching the video, the ‘rolling stones’ hooded blackbloc guy takes the weapon from a destroyed car and stands with it until he is disarmed.

Conventionally, Antifa come to riots dressed as a ‘blackbloc’ to make themselves harder to identify.

The Antifa chap says this in the Vice in the video I embedded here.

Blackbloc is an Antifa tactical dress code as it were.