Are you ready to understand the nature of the scam?

Are you ready to understand the nature of the scam?

The number of people in Ireland’s ICU units doesn’t change, no matter how many “Covid” patients are in it: 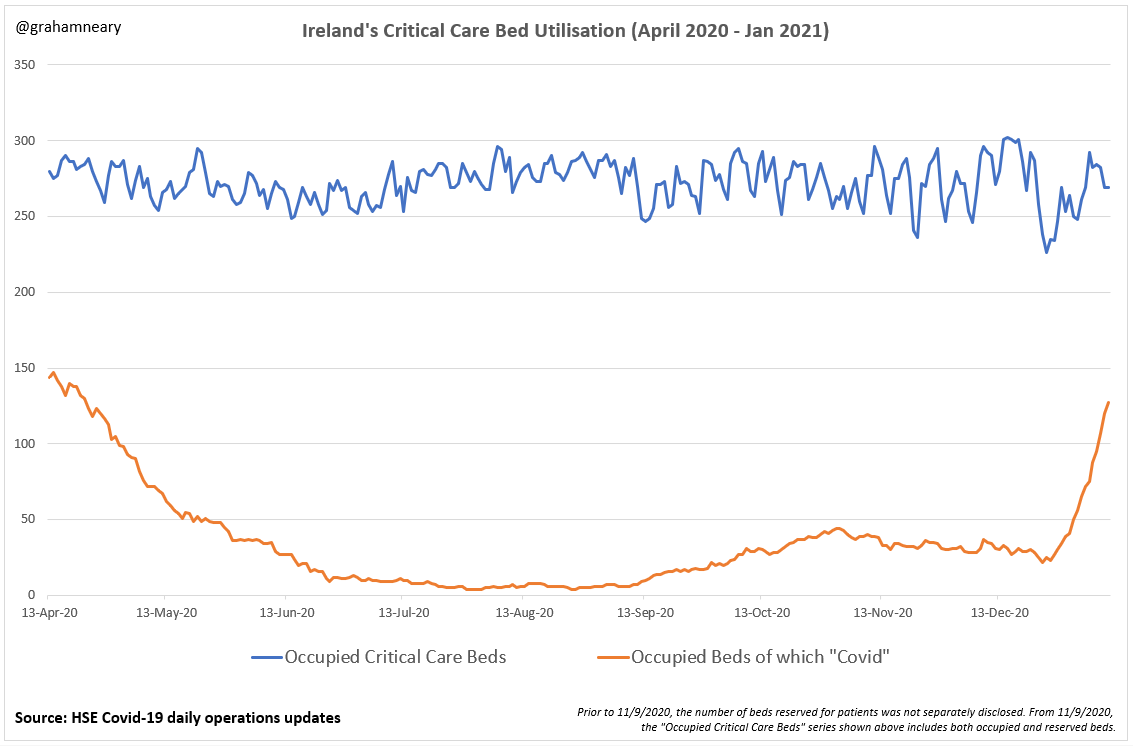 Firstly, it’s important to note that this is not because maximum capacity has been reached.

All the way back in mid-April, there were 500 beds, and additional surge capacity on top of this.

That capacity was taken out, as it was not needed. Fewer than 300 beds are in use today. 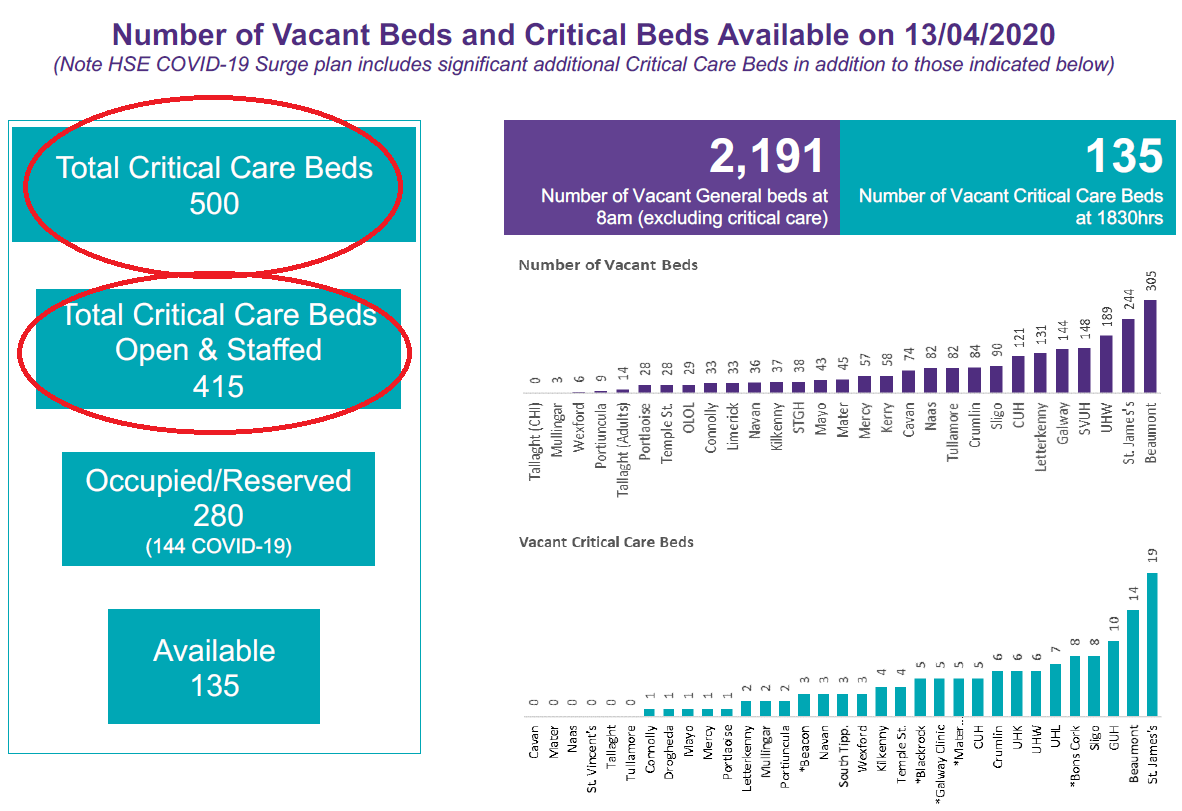 Think about what I’m about to say.

Since mid-December, the number of “Covid” patients in ICU has increased by around 100.

About half of all ICU patients now have the label “Covid” attached to them.

But the total number of ICU patients has gone down! 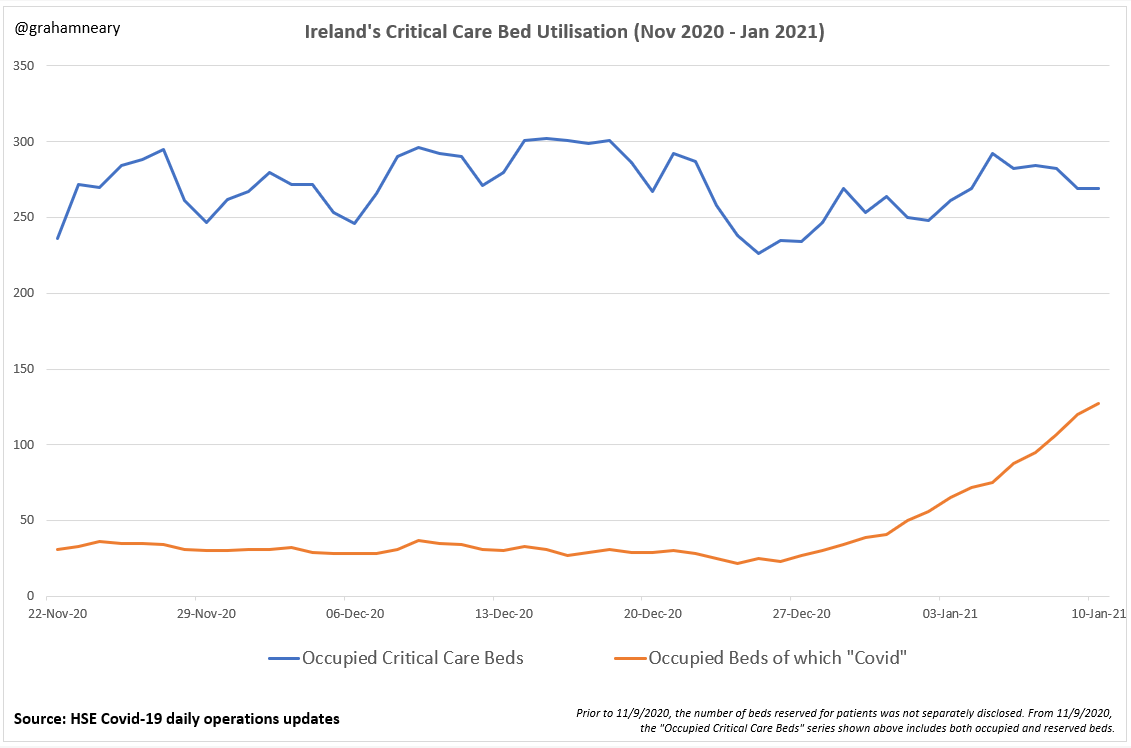 The same thing happened in reverse, earlier in 2020.

From April, the number of “Covid” patients in ICU fell steadily, from a high of around 150.

But by August, with only a handful of Covid patients left, the total number of patients was higher than it had been in April! 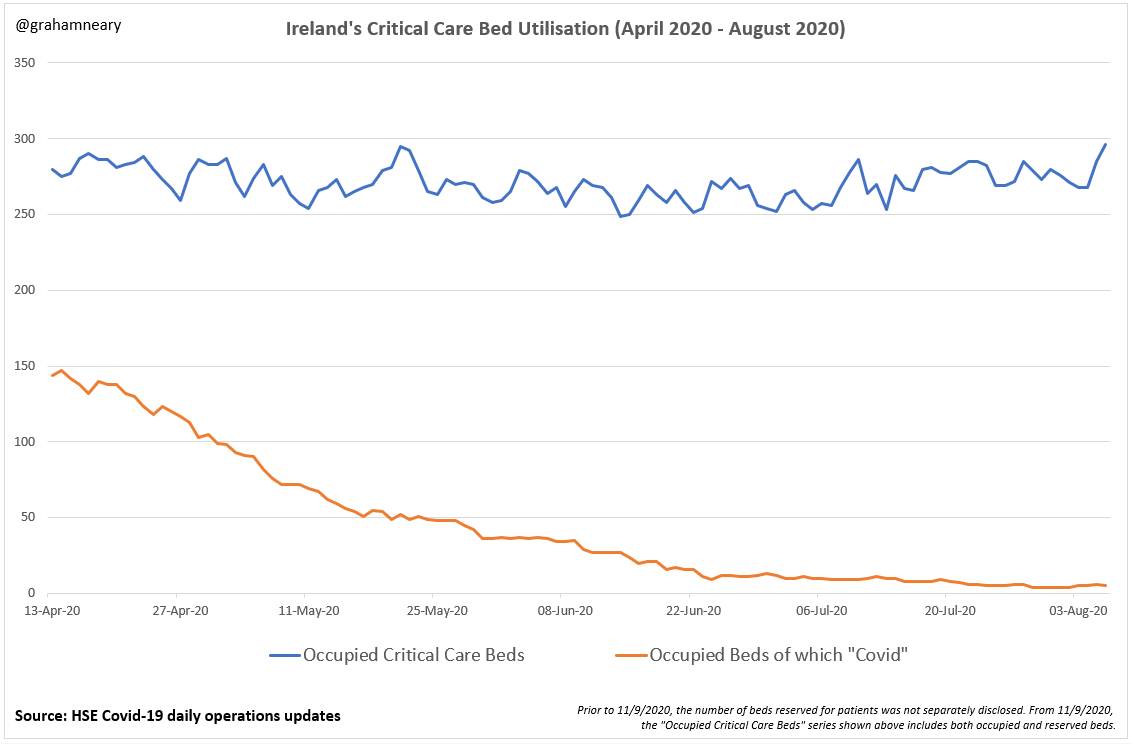 Please share this with your friends. It might not achieve much, but it’s the least we can do against the narrative of fear.

We must try to help our fellow citizens come to their senses. 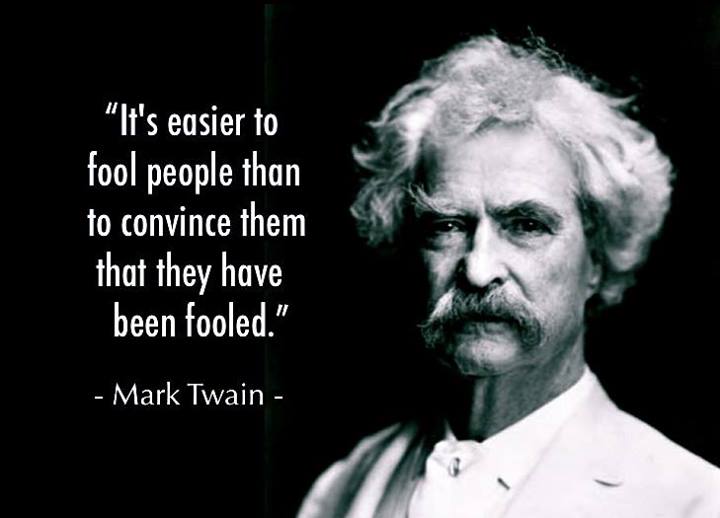 Recently reported, private hospitals have agreed to allocate 30% of beds as ‘surge capacity’ for treatment of urgent non-covid patients.
A similar allocation happened last year, but little take up was reported then - does the OP mean there is no need to be paying for private hospital surge capacity this time as well? 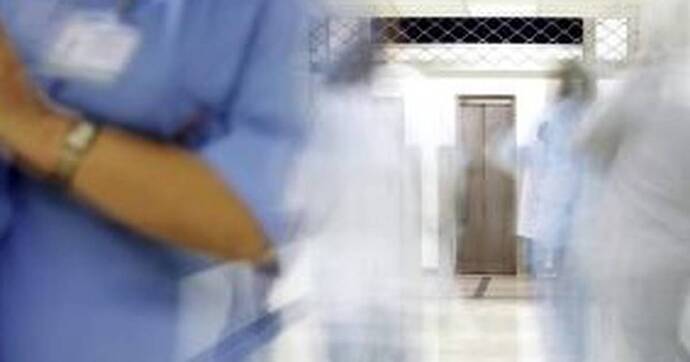 Prima facie It looks like a conspiracy theorists wet dream, but I will suggest that invasive surgery, like lung removal in a cancer patient was not being carried out in March / April and these would have required an ICU bed post op. Also a larger backlog of cases like this (non covid) would have accumulated.

I have speculated elsewhere that they were classifying anyone in hospital for any reason with a positive PCR result as a covid case and they probably still are, but, and it’s a big but, during christmas anyone who can goes home, no elective work, cancer patients who should be in hospital go home for a day or two and the numbers didn’t dip over that period. 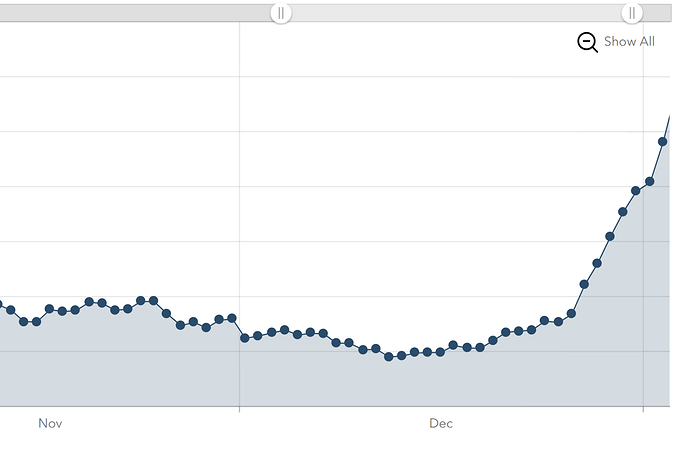 What I’d like to see are the numbers for the last 5 years hospital admissions and with the the ICU/HDU breakout at least not just the numbers dressed in PCR gowns.

Anecdotally I can confirm there were/are (rare) nights when there are no ICU beds are available in Dublin. General bed occupancy is always high, and so day surgeries and other operatives list do get cancelled. Just think how long waiting lists are for some operations and specialities. I don’t have access any more though, but yes, I imagine those ICU figures would be interesting, but I don’t know if those data are collated and kept anywhere. INMO were the ones who kept the best trolley count figures, rip.ie for deaths etc.

What’s the conspiracy here?
Many elective procedures are shut down for now.

The hospitals are full of patients struggling to catch their breath.
Not in ICU. They’re on the Covid ward with oxygen masks on.

Personally I know a few in hospital.
I know a few young athletes struggling to go for a run.
I know a former 20k runner who can’t do 5k now.
I know a 43 year old who died. 3 kids left behind.

I know dozens who have tested positive. Symptomatic and asymptomatic.

The only good news is that if you survive Covid, well you have better immunity than that provided by the vaccines. 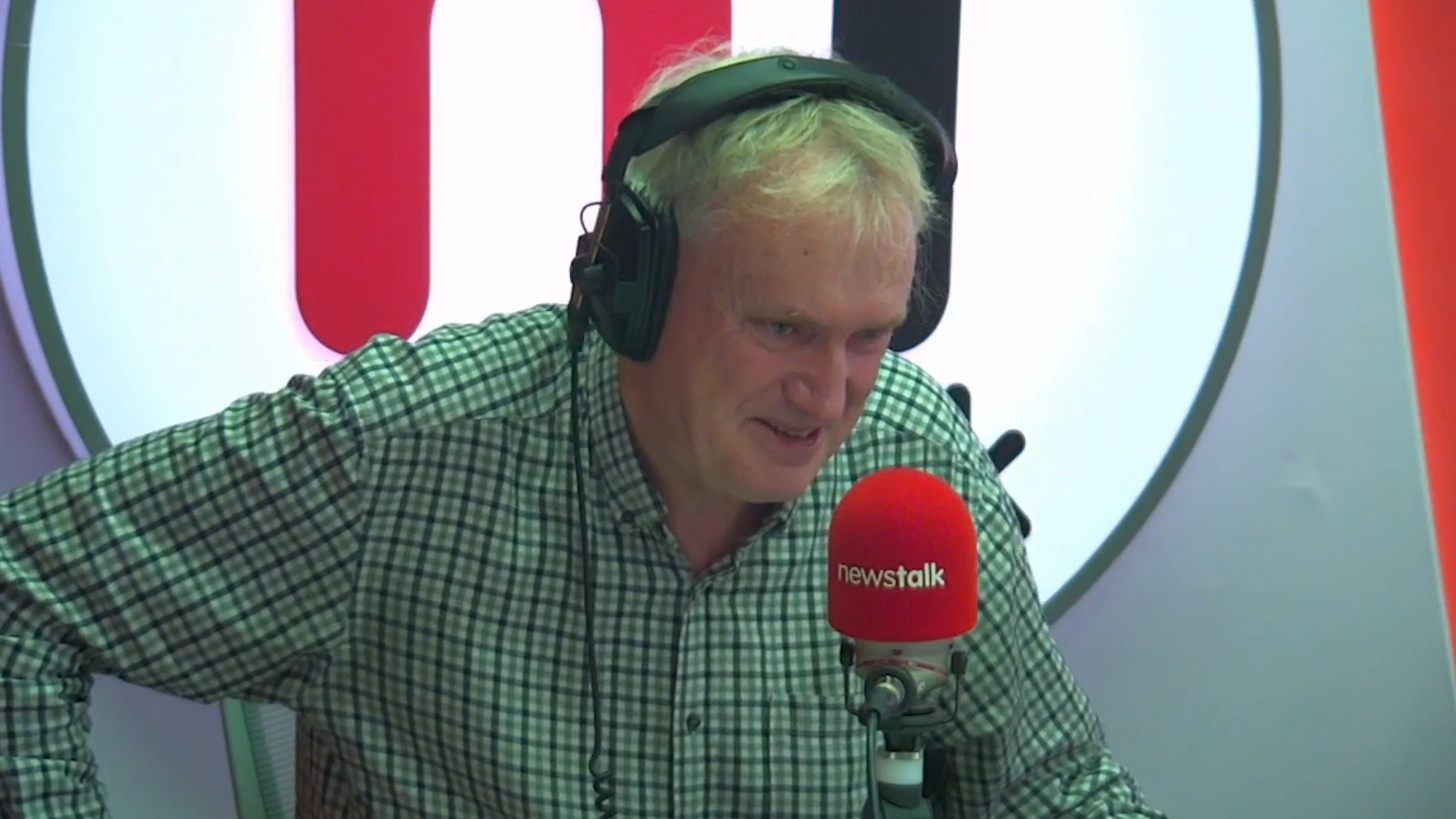 New studies suggest people who have recovered from coronavirus have a stronger protection against the disease than those who take the vaccine.

nights when there are no ICU beds are available in Dublin

That happens regulary, every winter for years brought to you by one of the worlds most expensive health systems. If you are going to have a serious car crash don’t do it in January…

I absolutely agree that COVID is real, coronaviruses can cause significant mortality in older people, SARS had a 10% mortality rate. When all this started back in February I was very concerned at how bad this one might be. But mortality rates in younger age groups are low, although exceptions and severe infections can and do happen, and yes this is a nasty one, with post-viral sequel (which can occur after most viral infections). However, I’m not convinced that “asymptomatic PCR-positive COVID” is significant enough to warrant the loss of civil liberties and economic fallout that will occur with these repeated harsh lockdowns.

I’m also not keen to be required to participate in worldwide enforced Phase 3 clinical trials for new therapeutics for a condition that has a 99.5% survival rate in my age group. The vaccine has not been shown to stop spread of COVID, so asking me to take it for altruistic reasons and the health of others isn’t a valid argument.

BREAKING: I have the latest monthly death registrations from the Irish government’s reporting office:

Let’s do another quick thread to expose the scam.

I’m now increasingly confident that there were just below 24,000 deaths in the first nine months of 2020 (based on the historic pattern of late registrations). 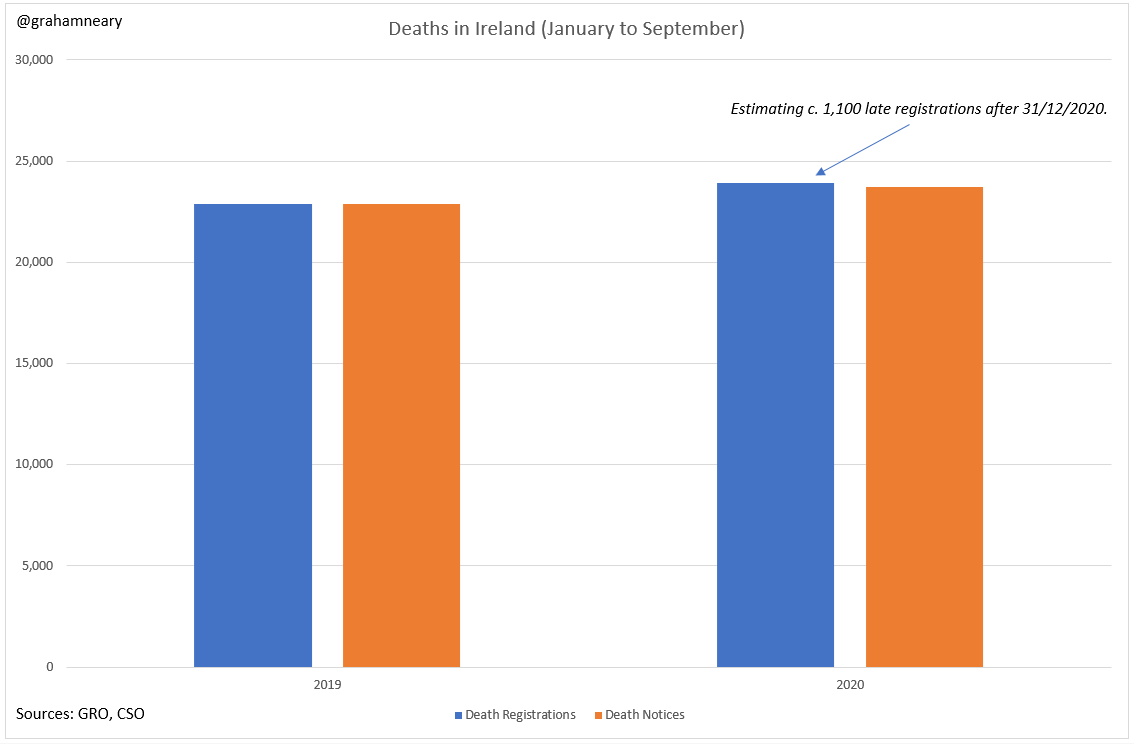 So we get the following picture for total deaths each year.

The second chart is the same as the first, but it excludes the 1,800 “Covid-related deaths”, i.e. it pretends they didn’t happen.

Hmm. It’s almost as if the first chart is more in line with the trend of prior years? 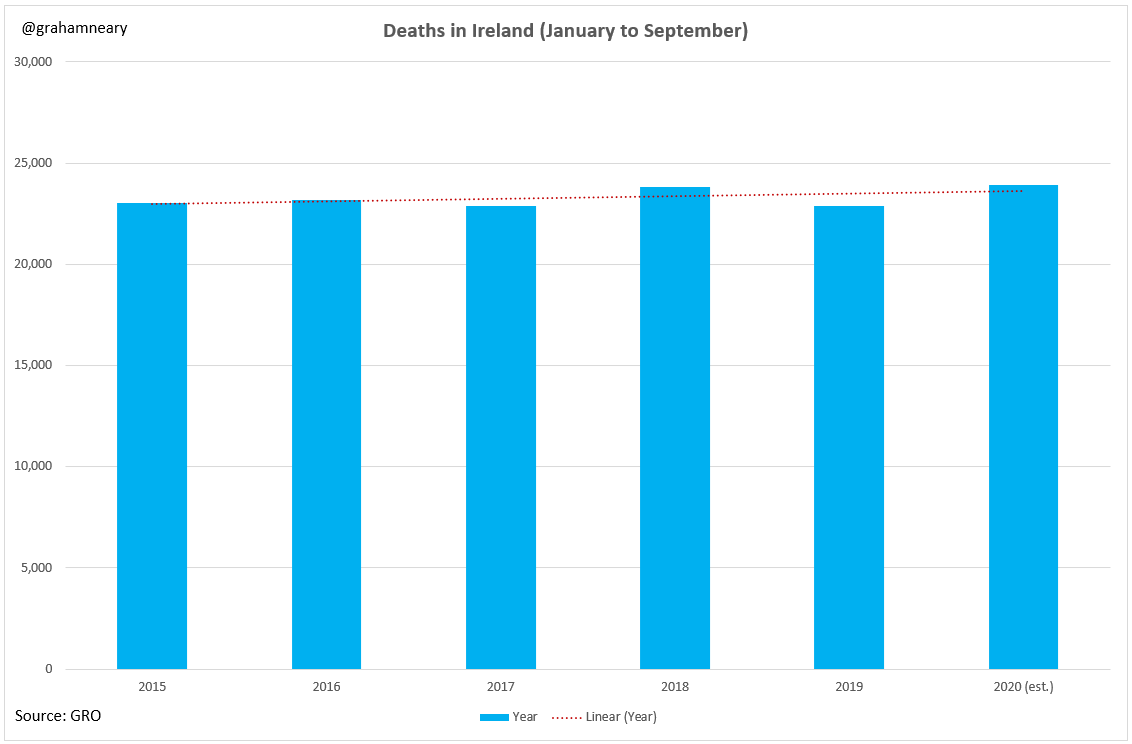 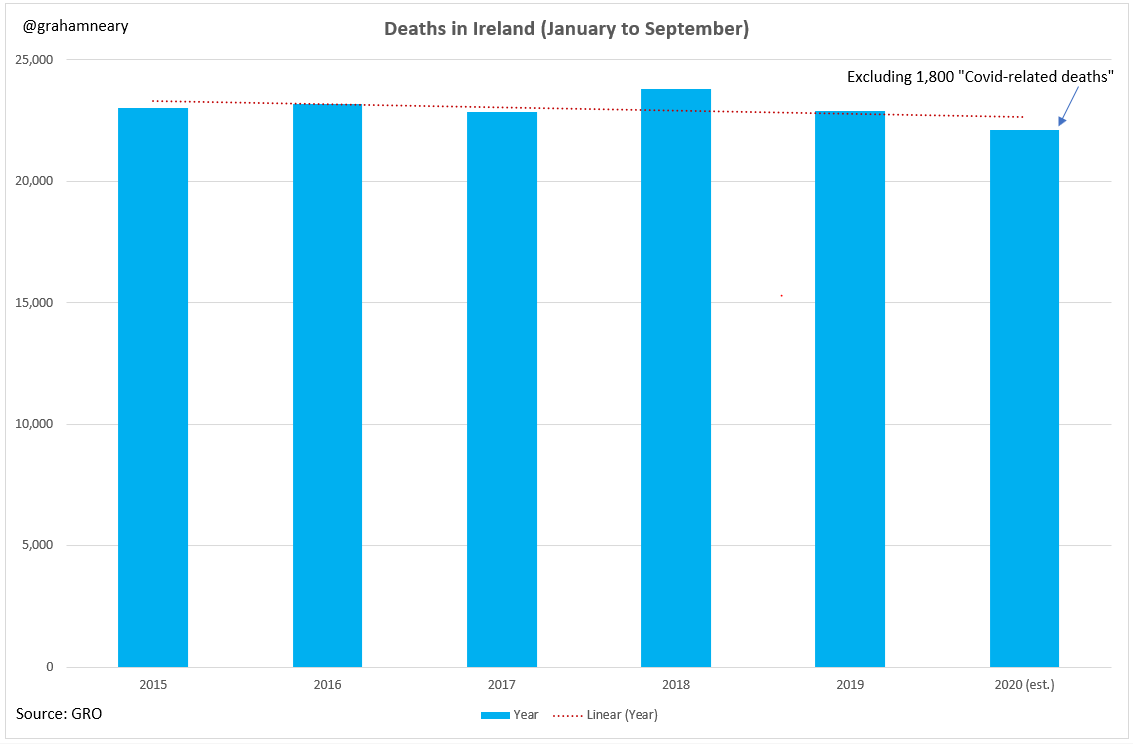 Now let’s do the same exercise, but instead of looking at total deaths, we’ll look at deaths per 1,000 people.

Do you see it yet? 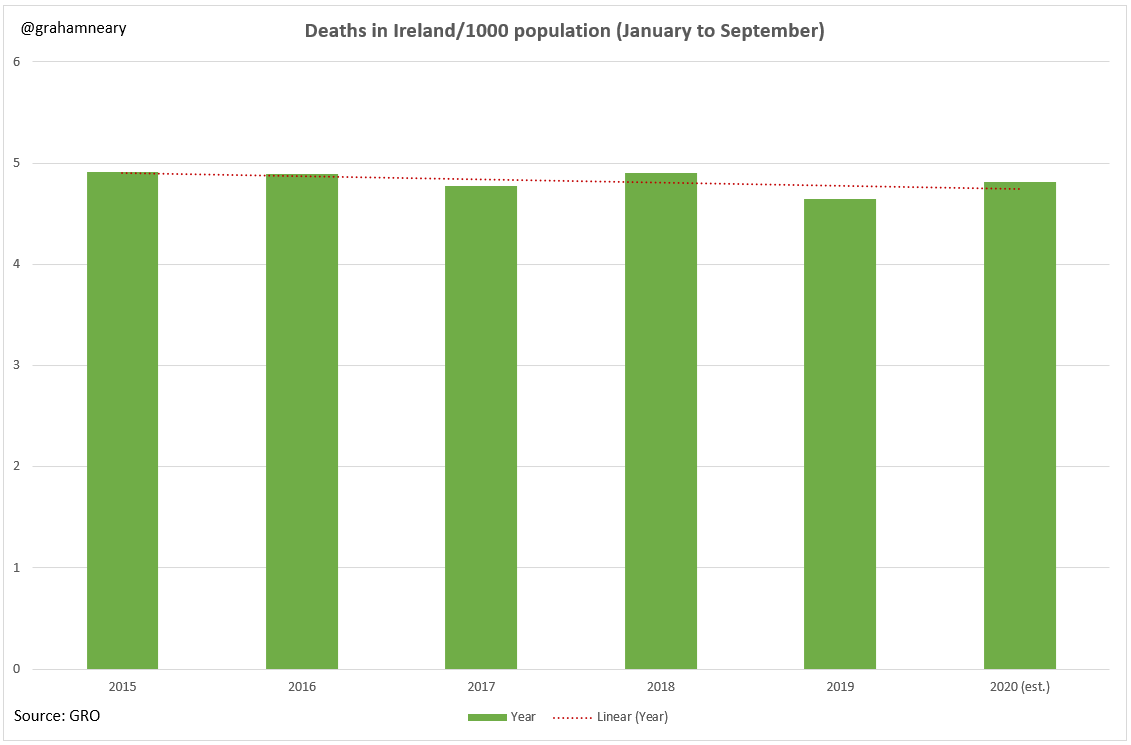 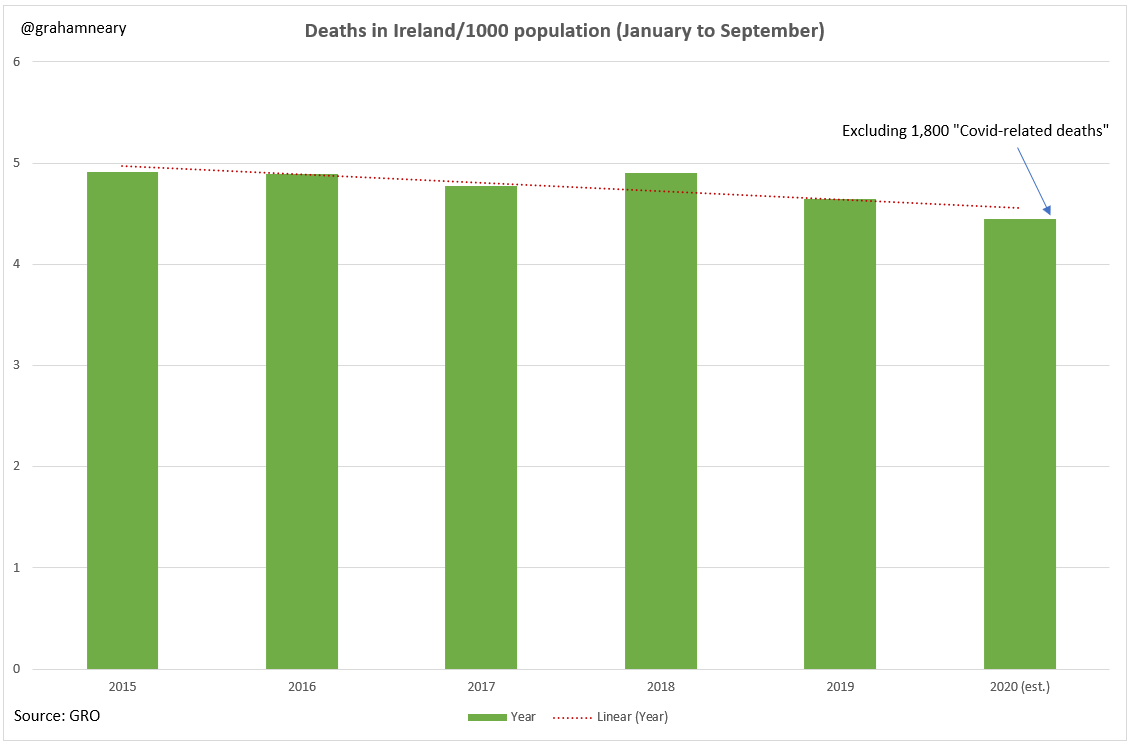 Now let’s do a very crude age adjustment (since the number of people aged 85+ has increased by 25% in five years).

The second chart, which assumes that the Covid deaths didn’t happen? 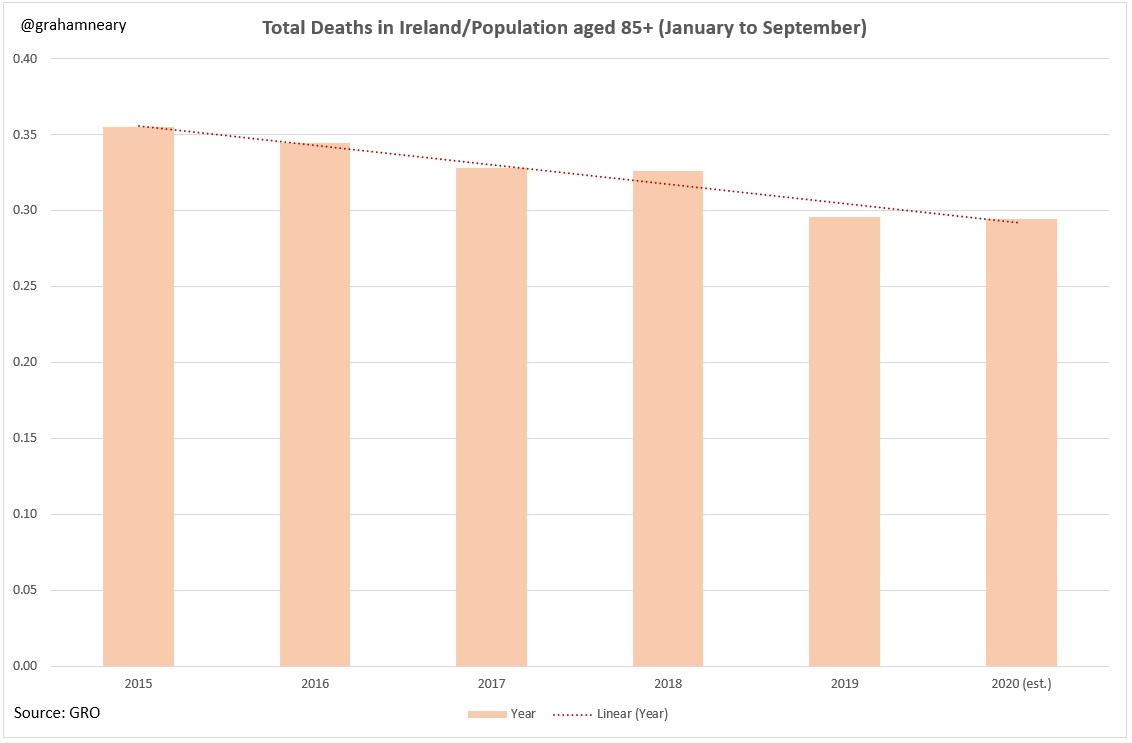 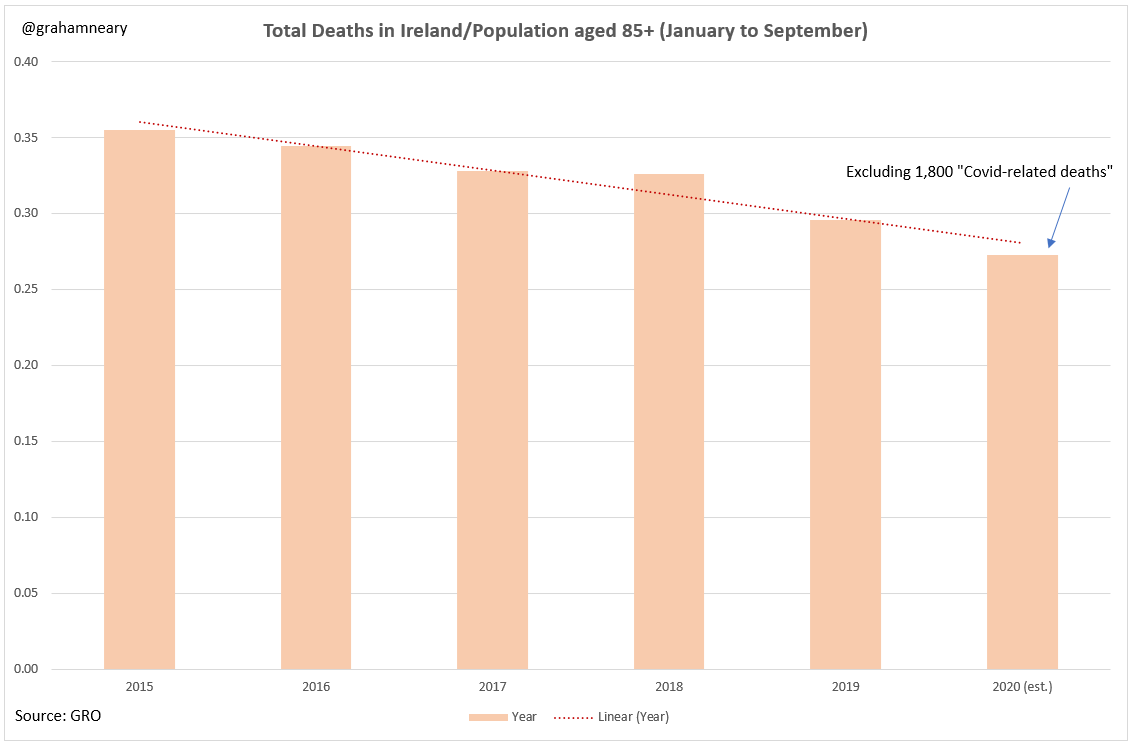 Does any of this matter? I guess not. Narrative trumps information. Fear trumps reasoning.

Maybe it will change, some day. 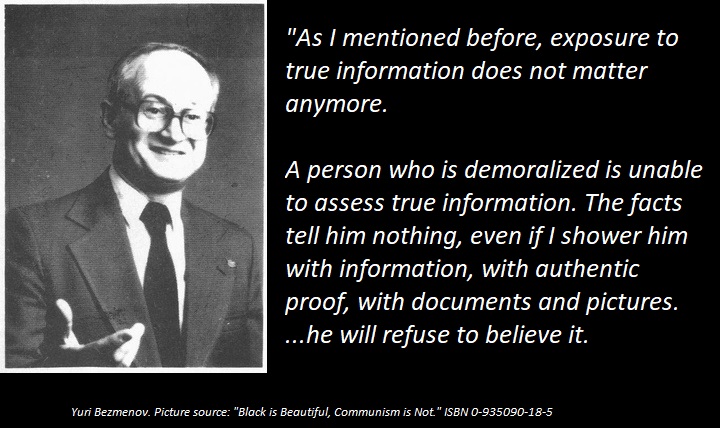 Carl Henegan linking to a December BMJ paper which queries, and I know this may shock you so I’ll stress I’m quoting the title verbatim here, if there are any “Conflicts of interest among the UK government’s covid-19 advisers”. 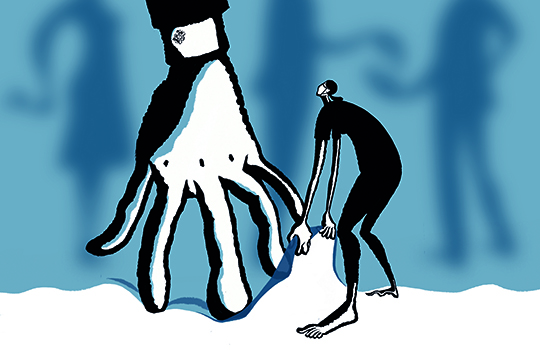 Conflicts of interest among the UK government’s covid-19 advisers

Little is known about the interests of the doctors, scientists, and academics on whose advice the UK government relies to manage the pandemic. Attempts to discover more are frequently thwarted, finds Paul D Thacker As the number of UK deaths caused...

And those are standard stories from flu epidemics of the past. The symptom progression, and progression rate is little different between pandemic flu and SARs Cov2. As are the long term health effects.

I know this first hand as I got Swine Flu (H1N1) in 2009 and only by good fortune (I was paying attention) I did not end up in hospital. There were no stat’s kept in Ireland of deaths, health effects, for H1N1-09, so no knowing how many hundreds died, but in the US the excess death numbers were about 60K and hundreds of thousands were hospitalized.

But not much coverage in the media in Ireland at the time. It was still wall to wall financial crises and the lead up to the IMF moving in.

I was just talking recently to the first serious symptomatic SARs CoV2 patent (non hospitalized because not old, no co-morbities) I have met since this began. The first. There have been a no-trivial number of RT/PCT positives with no meaningful symptoms though. We were swapping stories of symptoms, severity and after effects. Pretty much the same. Although I was immobile for longer (and I mean immobile) and for me it was almost six months before the after effects finally faded. He had bounced back pretty quickly. It was like no flu I had every had before. Many orders of magnitude worse. Not surprised it killed so many.

We have been here before. Many times. It just this is the first time the media turned a pretty typical epidemic (health risk wise) into pure mass hysteria which has shut down the country for most of the last year. And for the foreseeable future.

They have no exit strategy. None.

BTW. If need be it will get the serological test because I’d say there is a better than 50/50 chance I had a very mild SARs CoV 2 infection in early March. Symptoms just like the very early hours of Swine Flu, which were unique in my experience, some olfactory disruption as well, and the infection progression very likely disrupted by some medication I was taking and I had a good probability of cross tolerance.

So in situations like this one should always remember that for every story you related there are always many dozens if not hundreds of people you also know who have got or will get a SARs Cov 2 infection at some stage or other (it will be around 1/3’rd sooner or later) and the outcome will not be so unfortunate or tragic.

Plus I have found that there are usually key missing details in these stories. The one person I know of who came closest to death from a probable SARs 2 infection in the last year had almost died several times in the last few years from very high risk co-morbities. In fact their risk of dying from pneumonia in any given year is about probably about in 1 in 10 even before the epidemic.

These tragedies happen. But they happened in the past. At pretty much the same rate as at the moment. But most importantly not one single public health measure taken in the last year would have any impact on the morality numbers. None. Unfortunate, but true. Thats were people like me have the real problem with what is going on at the moment.

I think I mentioned it before. You would expect a lower total death as so many people who would normally spend some time in hospital in a normal year were not hospitalized. As so many are older and Hospital Acquired Infections rates are so high I would guess most of the decrease immorality is due to far fewer HAI deaths. And the fact that most “COVID deaths” are starting to look like just displaced cause pneumonia deaths. The pneumonia death rate staying about the same.

So we may finally have some proof for the old joke - Your not putting me in that hospital, dont you know its full of sick people, no knowing what I might pick up…