Austrians Vs The Menace

Michael Collins’ tactic is the way to go. The top cannot be reached but lower levels are not so much protected.
That’s why I find absolutely ridiculous the actions of the Polish Underground during II WW derailing the German Troops and equipment transport to the East Front. They should have let The White Bear and The Black Double-headed Eagle bleed and freeze to death on the flatlands between Smolensk and Moscow and on the banks of Stalingrad.
All the protest are controlled opposition with ex Irish Independent journalist put in charge.
Edit: another one is ex British serviceman crying 18 moths ago for being demonetized by JjewTupe. And the fancy fellow Computing ever and ever.

… the first lady he managed to “find”… perfect English with the accent from we all know where it comes from… and … the Earth is Flat.

Edit: they are not Austrians. Especially among these age cohort the knowledge of English is limited. Very little German accent there. And nearly perfect English. Impossible.

Is English your first language? They all had very distinct German tinged accents to me. Bar one. The asian lady. The only Europeans who are “accentless” to native English speakers tend to be Scandinavians. Everyone else has some kind of accent. Even if it is oddly neutral.

Although saying that I have a German friend who had a native Dublin accent after living in the country a few years. It was strange meeting her for the first time after she returned home to Germany. Gone was the Dublin accent and it was now strongly accented bayrish English again.

Those people in the film sounded just like every Austrian I have ever met over the years. Who like Germans and Swiss tend to have a good command of English. Unlike Italians for example. Who really dont do foreign languages. Except for business or work.

#Austrian police and army refuse to implement mandate sanctions. They will stand down!! If they stick to their word then the Austrian government will be in the big trouble. This is what is needed… #NoVaccinePassports #NoVaccineMandates

Yeah that is what was claimed above too but video above certainly tells another story. I’ll carry on with my plans just in case.

The best I can gather is it may be more operational resistance to the how of enforcement by police.

Any Austrian pinsters sans cold blood out there?

Schallenberg has resigned according to reports- just after his predecessor Kurz announced he was quiting politics. Who’ll be the first big name Irish rat to flee the ship I wonder…

I’d put my money on Stephen Donnelly. He is a totally slimy piece of shit. Even before he made minster. If he realized that once the first few cases of Public Health Medical malpractice liability establish the case law (in other jurisdictions) then he as the minister could be hauled up in court to answer some very pointed questions. As this is Ireland wont happen for a decade or two at least. But its something to look forwards to. 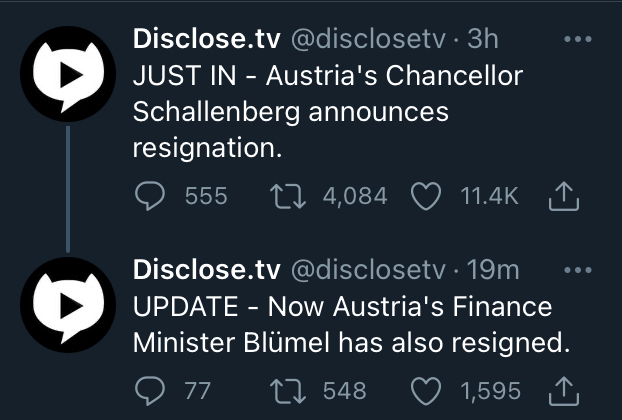 I’d put my money on Stephen Donnelly. He is a totally slimy piece of shit. Even before he made minster.

He’s McKinsey. Someone did a great thread on him at one stage.

Very interesting. I like the Pfizer connection. Plus all the usual suspects. Very much part of the Davos Borg.

What was a huge red flag for me was his rather bizarre behavior even before he became a minister. I wont go into details but I have dealt with a number of elected representatives in a whole bunch of countries in the past, as I was doing at the time, and I was confused by his manner until a short time later the public announcement was made of his mysterious elevation to Minster of Health. Then it was , a ha, thats the game the f*cker was playing. Now it all makes sense.

But he’s actually not that bright. He just the updated and slicker version of the gombeen politician. Of the Albert Reynolds variety. Around the same time I was dealing with another variety of cute hoor politician, of the “Ultra Progressive / Woke” variety, and the contrast with Donnelly was startlingly. I was helping out a friend because i knew my way around the Board of Supervisors, City Hall, and how the City Departments worked. The problems was not solved, there was a legal ambiguity, but all the right people got involved and source of the problem had inspectors and city officials all over them and there now is a serious paper trail. For next time. And the elected representative responded as expected when approached in the normal way. Some cultural differences between countries but Donnelly was the first case I had run into that was a real head-scratched. Until I saw the ministerial promotion.

The problem with Donnelly is that his combination of devious bastard with limited intelligence makes him politically useless. If he was half as intelligent and half as devious as say a Padraig Flynn then the country would actually be in fairly good hands. With people like him in ministerial power the situation is beyond f*cked because the upper level civil servants in the dept sound worse than useless. Although not Iveagh House useless. None of them are that incompetent. So I suppose it could be worse.