Bank Of Ireland charging negative interests rates from 6th August 2021 - Is this the start of Bail ins in Ireland?

A friend received this notice to-day and asked if this was start of not bail outs but bail ins in Ireland?

The right to private property is one of the tenets of a civilised society and when bankrupt governments begin to impinge upon that sacred right, it ...

“Ah, you say, but the government guarantees all bank deposits up to €100,000; more fool you if you believe the word of a politician. Cyprus hosted a trial run for the bail-in in 2013 as described below in an article by Doug Casey: “In 2013, the banks of Cyprus confiscated the deposits of many of their clients”

Basel III and not having any gold reserves to speak of?

Perhpas I don’t have a clue.

Wouldn’t have thought bail-ins will end up being the main mechanism used for wiping out bank deposits. Inflation does it more effectively without the hassle of legislation.

I wonder what the very rich in Ireland will start investing their money in so it doesn’t incur negative interest rates. I could make a few guesses.

Will there be negative DIRT? 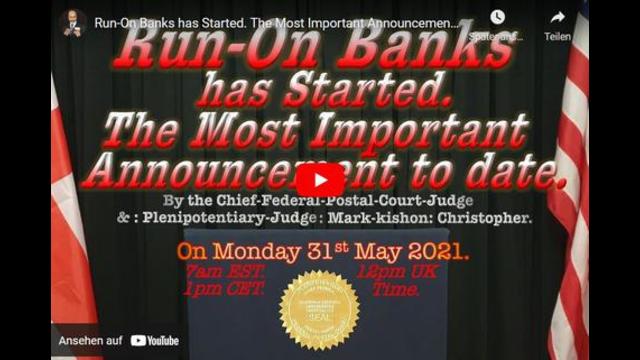 Run-On Banks Has Started! The Most Important Announcement To Date!

Urgent reform of the EU resolution framework is needed

he financial industry and regulators in the EU seem to have converged on the following:

This column starts from this consensus and from the conviction that the existing European resolution framework, an essential part of the European banking union, is still largely deficient.

In our view, two aspects of the European resolution framework are particularly in need of reform: the bail-in regime and the resolution mechanism for cross-border banks.

To reduce the likelihood of bailouts, the 2014 Banking Recovery and Resolution Directive (BRRD) insists on a bail-in of 8% of a bank’s balance sheet, even under ‘extreme systemic stress’, as a necessary condition (1 since January 2016) for access to the Single Resolution Fund or even national public money. While the 8% rule is non-negotiable, financial instability concerns allow resolution authorities to exempt, next to secured liabilities, interbank debt expiring within seven days. This flexibility is limited, however, since: (1) the resolution outcome should respect the ‘no-creditor-worse-off’ (than in bankruptcy) principle; and (2) priority is (retroactively) granted to natural persons and SMEs over other unsecured claims (and among those, priority is granted to the deposit insurance fund).

Together, these two principles put ‘wholesale deposits’ at greater risk by (retroactively) making them junior to (uninsured and, even more, insured) retail deposits. This is a paradox, since the post-Lehman crisis showed that wholesale depositors ran much faster than retail ones. Aware of this risk, the BRRD mandates the Single Resolution Board to impose Minimum Requirements of own funds and Eligible Liabilities (MREL) targets that are specific to each bank. The problem is that, so far, many European banks do not have sufficient subordinated MREL claims, with the result that the 8% rule cannot be implemented without risking financial instability. So, the banking union has in theory a stricter bail-in regime than the one recommended globally by the Financial Stability Board (FSB), but one that it cannot implement in reality. In fact, to this day, the 8% bail-in rule has never been applied (in the Banco Popular Español case, only subordinated claims were bailed-in, as already prescribed by the 2013 State Aid guidelines).