BLOOD - Taking Down Humanity - Self spreading Vaccines or Vaccine Shedding: A Bio-weapon by another name?

Well this is encouraging… 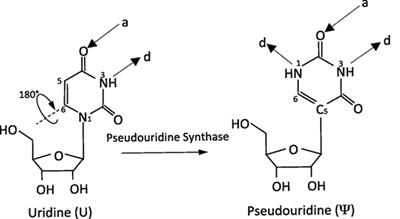 Pseudouridine is the most abundant internal RNA modification in stable noncoding RNAs (ncRNAs). It can be catalyzed by both RNA-dependent and RNA-independent mechanisms. Pseudouridylation impacts both the biochemical and biophysical properties of...

or how about this…

As more ψs in ncRNA transcriptional regulators are identified, a better understanding of how these ncRNAs impact eukaryotic mRNA transcription will be achieved. Since many of these ncRNAs are associated with diseases, determining how the functional impact of their pseudouridylation may open the door to novel therapeutic strategies.

Which raises a really scary thought. So at the moment about 1 in 1500 adverse evenst are associated with premature mortality. What happen to society when 1 in 200 or even 1 in 100 long term serious adverse events start showing up. How will the 80% of the population who are not come what may COVIDIAN true believers going to react when they discover that they have been brainwashed by incompetent politicians and their public health facilitators into been given an ineffective unnecessary medical procedure which kills almost 1 in 1000 and will serious impacts the health of up to 1 in 100.

Denial will only last so long. When will the anger start. And more important what will be left of pubic heath medicine and medicine in general after it is all over.

The amount of problems with these Liposomes are endless. At every point you look there is the potential for a new set of problems. It’s beyond belief that they didn’t do long trials on them. The amount of new chemical groups being introduced to the body that haven’t been monitored before is incredible.

I was just taking a look at the mechanism of action of thalidomide and where this caused problems. I don’t actually think there are definite answers on this (even for this 65 year old drug) but it appears that some of the major issues were regarding Transcription. As appears to be the case for this pseudouridine. A tiny kink in the Thalidomide molecule caused a massive amount of problems. The problems arose because the benzyl group (the round thing) attached to the N-group (nitrogen atom) turned up instead of down, effectively, in a tiny percentage of the manufactured chemical. This caused all the defects in babies. And only on a few days of pregnancy. All other days were fine… but for a few days, day 19 - 25 or so, it causes insane levels of damage. Different types of damage on each day. It took many years before someone realised this. If you look at the pseudouridine structure, it completely flips the Carbon and Nitrogen atoms in the benzyl group. This is going to make these structures act way different in the body than before. I think it’s massively different to how different the safe enantiomer (version) and unsafe enantiomer of Thalidomide are to each other. And again, for the vast majority of the population both enantiomers of Thalidomide are safe all the time but for a small percentage they are insanely dangerous.

Just in relation to what Diana was mentioning above also, we had discussed the pseudouridine on here earlier in the year but not in great detail as there were so many other potential hazards associated with the new genetic vaccines. I believe I might have linked some information that one of the main reasons they used pseudouridine was because you cannot patent natural compounds, natural mRNA, so they had to use pseudouridine… kind of unbelievable. And again, with all the crazy new technology in these things, they were able to bypass the many many years of testing required by just scaring people to death over a cold that is pretty harmless to the vast majority of the population of the world. I recall how some recreational drugs were banned in the UK when one person died (maybe of other causes) and another person went to hospital from a new pretty simple drug. It kind of gives an idea of the high levels of denialism taking place right now. It’s a true mass hysteria.
It is breathtaking to see the potential dangers of these new genetic vaccines at every point you look.

@jmc & @EconomicCrashDummy - thoughts on this (seen elsewhere)? Mentions a few other potential issues in addition to the pseudouridine & liposomal ones.

There are enzymes in your body that go around looking for mRNA, find it, and break it down into component parts to be re-used. mRNA is supposed to create a message to do something, then vanish once that something is done. On-going effects, normally cause continuous streams of RNA to be made.

This was undesirable from the point of vac manufacturers.

So they ‘stabilize’ it. to keep this normal safe process from happening. How do you keep the RNA from breaking down so fast and sticking around longer? They change it so it’s not real RNA and your body doesn’t detect it to break it down normally. They do a TON of stuff, under the term ‘stabilization’, and play it off like all they are doing is adding salt to the mixture and keeping the vax cold. Nothing could be further from the truth.

They are doing 6 things to the ‘RNA’ that make it, well not really RNA…

So normally DNA / RNA has an alphabet consisting of 4 letters each, from a total of 5 letters. the DNA->rna process transcribed the 4th letter for the 5th, which is what makes DNA and RNA actually different.

The ‘vaccines’ introduce 8 new ‘letters’ to the RNA sequence, that do not get detected by your body as RNA. They get transcribed by the transcriber, sure. but it is NOT RNA. The current batch is using “pseudouridine (ψ)” as a substitute for uridine.