Deserving of its own thread as this this is not just about Ireland. However skip forward to approx 21:30 for what the future could hold for Irish Water.

When Water Is for Sale: What Water Privatisation Really Means

The dominant argument is that the state takes too long to provide the necessary services which are deemed ineffective; in reality, however, the countries that have applied this doctrine were led to the creation of a powerful private monopoly where acquisitions and mergers shattered any sense of competition and hope for reduced tariffs.

From the beginning of 1980s until 2000, there was a huge pressure from international financial institutions and multinational corporations to privatise public water companies. The result was that 5 major corporations, Veolia, Suez, Agbar, RWE and Saur, held 71% of the global water market in 2001. But the reaction of citizens, led to renationalisation of the networks. Today, large corporations own only 34% of the market while 90% of the 400 largest cities in the world still have a public water network. In 2011 only 12% of the water on a global scale was in private hands. Privatisation has now taken the form of investment in hard technology and purchase of water rights.

But what has happened in countries where the network was privatised?

In 2008 in France, the city of Paris decided not to renew the contract with the companies Veolia and Suez who owned the network since 1985, and to assign the water system to the municipality. In 2010 the municipal company Eau de Paris was founded and the city managed to save 35 million euros per year while reducing the tariffs by 8%.

In Germany, water agencies are owned by the public sector everywhere except in Berlin while the Netherlands in 2004 declared by law the participation of any private agency in water services as illegal.

Thus, while privatisation of water has failed and there is a strong tendency worldwide towards renationalisation, the European Commission requires the selling of water supply as a condition for the financial bailout of Greece and Portugal. The Greek government and its supporters, regardless of the consequences, fully endorsed the legislation on privatisation, including the water supply network.

The Water Bandits: Drought Is Driving Californians to Theft

In the new Wild West, law enforcement is scrambling to respond.

Almonds are sucking California dry.
They use far more water than other crops, and are mostly sent abroad.

With a chronic overuse of resources, it only takes a few bad rainfalls or poor management decisions to plunge a region into crisis

Every inhabited continent, to varying degrees, has areas where there is extremely high water stress. These are areas where more than 80% of the local water supply is withdrawn by businesses, farmers, residents and other consumers every year.

These so-called stressed areas are also the ones most vulnerable to episodic droughts. With chronic overuse of water resources, it only takes a string of years with bad rainfall or poor management decisions to plunge a region into crisis and chaos. Here’s a look at seven extreme droughts that have occurred in the past decade.

Forthcoming projections for global water stress in 2020, 2030 and 2040 by WRI’s Aqueduct project indicate that the global water picture is likely going to get worse over the next few decades. Larger populations and growing economies demand more water and in some places climate change will likely reduce available water supply. While our vulnerability to drought grows, the incidence of extreme weather events, including drought, will grow as well, according to most climate change experts. 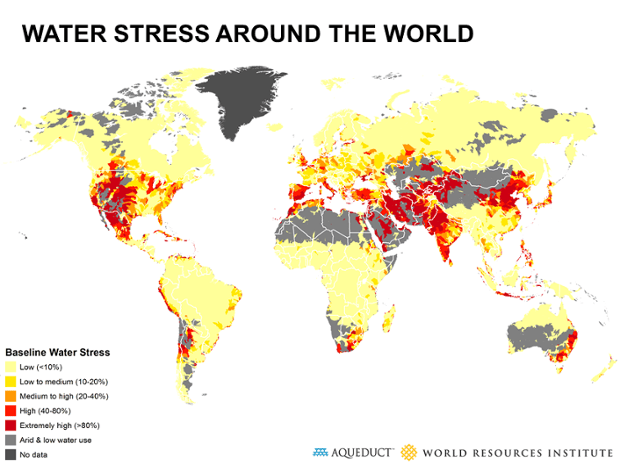 No surprise here at all.

People are routinely ingesting plastic through drinking water from their kitchen taps both in Ireland and abroad, a global survey has found.

The extent of plastic contamination across the environment is laid bare following original reporting and scientific research by Orb Media, a global non-profit newsroom based in Washington DC, in partnership with the Irish Independent.

An analysis of some 159 drinking water samples found that microplastics, fibres from clothing, and plastic threads are present in drinking water drawn from public supplies, including from a house at Crumlin in Dublin.

Researchers at the State University of New York and University of Minnesota found that microscopic synthetic fibres were found in 83pc of drinking water samples taken from cities and towns across five continents, including tap water from the US Capitol Complex and the Trump Grill in New York.

In addition, researchers also analysed five separate samples supplied by the Irish Independent, all of which were found to be contaminated. These did not form part of the global survey.

The study is the first to show plastic contamination in tap water, and has prompted fears that human health **may **be at risk.

I think we all know the real question: who the fuck are Orb Media? How did they get their press release in every major global newspaper, pointedly referencing them by name multiple times?

I nearly got sick reading the garbage touted about them on their webpage.

I think we all know the real question: who the fuck are Orb Media? How did they get their press release in every major global newspaper, pointedly referencing them by name multiple times?

I nearly got sick reading the garbage touted about them on their webpage.

But you don’t dispute that there is a lot of micro plastic strands in Irish public water supplies.