Must be some common denominator. Jumbo mortgages perhaps?

Wouldn’t surprise me if the common denominator was Interest Only. UB have a truck load of these IOs in arrears, IO term due to end 2016/17/18 and they figure someone else can deal with the headache.

It is actually probably good news for the mortgage holders.
If I was a strategic defaulter with a secret cash pile, I’d fancy my chances of a better deal by opening negotiations with so called vulture funds on a fresh slate than with a lender I’d screwed for a number of years.

Of course defaulters with no secret stash pile will be screwed either way.

Here we go, from thejournal.ie:

Independent TD, Michael Fitzmaurice issued an urgent statement about the sale, calling it “indefensible conduct”.
“The new Government will have to do what they can to stop this carry on by the banks. A major bank have once again given the two fingers to the Irish people.
This bank wants to get out of Ireland and they have sold these loans at the minimum cost but you can be certain that the new owners of these loans will want repayment in full. No consideration at all was given to the people who owe these loans to the bank.”
He called on the government to pass emergency legislation to prevent Ulster Bank and other banks acting like this in the future.

So we have TD’s calling for emergency legislation to protect nearly 800 households who haven’t paid their mortgage in over 3 years!!

A great little country to not pay pay your debts!

Royal Bank of Scotland is on course for an eighth consecutive year of losses.

Royal Bank of Scotland is on course for an eighth consecutive year of losses amid fresh concerns over the health of lenders across Europe.
The taxpayer-owned bank is this week expected to reveal it remained stuck in the red in the second quarter of the year following a loss of £1billion in the first.
That would put it on course for another full-year loss – the eighth in a row since the financial crisis in 2008.

Ulster Bank to pay €1.5 billion dividend to its parent group

Ulster Bank is most fined financial institution in Ireland - -> irishtimes.com/business/fina … -1.2850427

Ulster Bank’s latest €3.3 million fine from the Central Bank means the bank has now been fined more than any other financial institution operating in Ireland since 2006, and more than either of the scandal-hit Quinn Insurance and Irish Nationwide.

On Tuesday, the Central Bank imposed a fine of €3.3 million on the bank for for breaches of anti-money-laundering and terrorist financing regulations. Regulators said the bank had admitted the breaches, which occurred over a six-year period, and said the incidents highlighted “significant failings” in the company’s procedures.This brings total fines for the Irish-based subsidiary of Royal Bank of Scotland to €10.8 million since 2006, in excess of the €8.8 million in total imposed on Quinn Insurance which went into administration in 2010, and more than the €5.05 million levied on Irish Nationwide, which collapsed at a cost of €5.4 billion to the Irish taxpayer.

The bank’s operating profit slumped by €338m to €24m, as it freed up less money previously set aside for bad loan losses than it released in 2015.

Can’t find UB’s 2016 financial statements online yet but it would appear they wrote back the long hanging fruit in 2015 and still have the non performing ones in 2016, so can’t do the same

Ulster Bank is to withdraw free banking from thousands of customers over the age of 60.
It is set to impact on around 30,000 people and the move comes as it is set to announce the closure of up to 30 branches.
The change in the fee arrangements is set to enrage customers affected, especially those in rural areas who are already worried their post office will be among the 200 expected to be shut by loss-making An Post.

Ulster Bank is to withdraw free banking from thousands of customers over the age of 60.
It is set to impact on around 30,000 people and the move comes as it is set to announce the closure of up to 30 branches.
The change in the fee arrangements is set to enrage customers affected, especially those in rural areas who are already worried their post office will be among the 200 expected to be shut by loss-making An Post.

Not sure why they allow this for free anyway. Of all age groups I’d have thought wouldn’t change current a/c due to fees, it would be 65+

What do the good peoples of Dalkey be needing with banks.

22 branches closing in this round of branch closures …

The affected branches include five in Dublin (Dalkey, Donnybrook, Dorset St, Rathmines, and Sandyford); four in Cork (Ballincollig, Blackpool, Carrigaline, and Fermoy); two in Donegal (Ardara and Raphoe); two in Cavan (Arva and Cootehill); two in Limerick (Castletroy and Newscastlewest); and two in Galway (Briarhill and Newcastle). The other closures are Ballyhaunis in Mayo, Ballymote in Sligo, Carrickmacross in Monaghan, Edenderry in Offaly, and Edgeworthstown in Longford.

Ulster Bank is facing strike action across its branch network in retaliation against changes to the RBS-owned lender’s pay reform proposal, which unions say will “reduce staff future earning proposals significantly”. The financial services union has begun polling in an ‘indicative ballot’ among its members in branches.

Ulster Bank is insisting that it won’t shut more branches here, even after the shock closure of a quarter of all owner Royal Bank of Scotland’s UK bank branches in the most dramatic sign yet that lenders are pulling out of their physical networks.
UK state-owned RBS announced yesterday that it will close 259 branches in England, Scotland and Wales and cut around 680 jobs.
The move is aimed at cutting costs and encouraging more customers to use digital services, drawing criticism from politicians.

They’ve been shuttering them quietly across the country for the last few years.

The news came as senior central bankers and Oireachtas finance committee members locked horns on Thursday over the approach that overseas buyers of non-performing loans are taking to mortgage holders in default.

The Ulster Bank portfolio, known as Project Scariff, is comprised of €900 million of owner-occupier loans across 3,600 accounts and €700 million of buy-to-let (BTL) mortgages across 2,900 accounts, is expected to be the final big portfolio sale by Ulster Bank. This follows years of restructuring at the company, a unit of UK government controlled Royal Bank of Scotland.

Ulster merger with PTSB could boost profits by 50%, Davy says
Analysts see likely resistance to scheme in Dublin and Edinburgh

A merger between Ulster Bank and Permanent TSB (PTSB) would boost the combined weak profitability of the two lenders by almost 50 per cent, according to an analysis by stockbroker Davy.
While the analysts expect Ulster Bank’s new chief executive Jane Howard to initiate a strategy review of the Royal Bank of Scotland (RBS) unit as soon as this year, they say any proposed tie-up between the two banks will likely meet resistance in Dublin and Edinburgh in the near term.
“In the current Irish political landscape, we would expect any combination to be heavily challenged – particularly with a minority government – and viewed as an erosion of competition rather than as a much-needed strengthening of the sector and, in fact, creating a true ‘third banking force’,” said the analysts, including Stephen Lyons and Diarmaid Sheridan.
Investment
RBS management and the UK government, which owns 62.4 per cent of the group, would unlikely to be interested in “doubling down” in Ireland with fresh investment, as the priority remains on moving excess capital in Ulster Bank to base. Ulster Bank returned, by way of dividends, €3 billion to RBS between since late 2016, following a £15 billion (€17 billion) parental bailout during the crisis.

However, the Davy analysts concluded that despite the obstacles to a deal, “we expect that a possible combination, although unlikely in the near term, will garner increased focus and speculation”.
While 75 per cent State-owned PTSB’s agreed to sell and securitise €3.4 billion of non-performing loans (NPLs) last year to lower its NPLs ratio from 28 per cent to below 10 per cent, its remaining business will only generate a 4 per cent return on shareholders’ equity for the foreseeable future, according to Goodbody Stockbrokers. That’s half the minimum rate that investors in a retail bank would expect.

Davy estimates that Ulster Bank’s return on equity, a key gauge of a bank’s profitability, amounted to a little over 5 per cent in the first nine months of 2018, excluding exceptional costs.

Davy analysts forecast that growing mortgage lending, increasing European Central Bank (ECB) rates lifting the pricing of tracker mortgages, and improving property market will help Ulster Bank and PTSB to boost their pre-tax profits by the end of 2021 to €136 million and €113 million, respectively. However, cost savings and other synergies from a merger would boost these figures by 46 per cent to a combined €371 million, they said.
That would deliver a return on equity of almost 10 per cent for the merged entity, which is much closer to RBS’s group target of 12 per cent, the added. The Davy analysts not explore the mechanics of a potential deal in their analysis, which is part of a wider report on RBS.

Last April, then chair of the ECB’s banking supervision arm, Daniele Nouy, suggested to Department of Finance officials on a visit to Dublin that a merger between PTSB and Ulster would boost the health of the Irish financial system.

A spokeswoman for Ulster Bank and spokesman for PTSB declined to comment.
RBS carried out its last strategic review of Ulster Bank in 2014, resulting in the group reaffirming its commitment to the Republic. The group subsequently aligned its Ulster Bank business in Northern Ireland more closely with its NatWest division.

On that basis RBS should buy PTSB.

It is very difficult to offload a book of mortgages where a significant cohort don’t see it as their obligation to pay very much, if anything at all for 2 years or more, yet still retain the property. Backed up by elements of the courts service. International investors and taxpayers tend not to go for that too much. 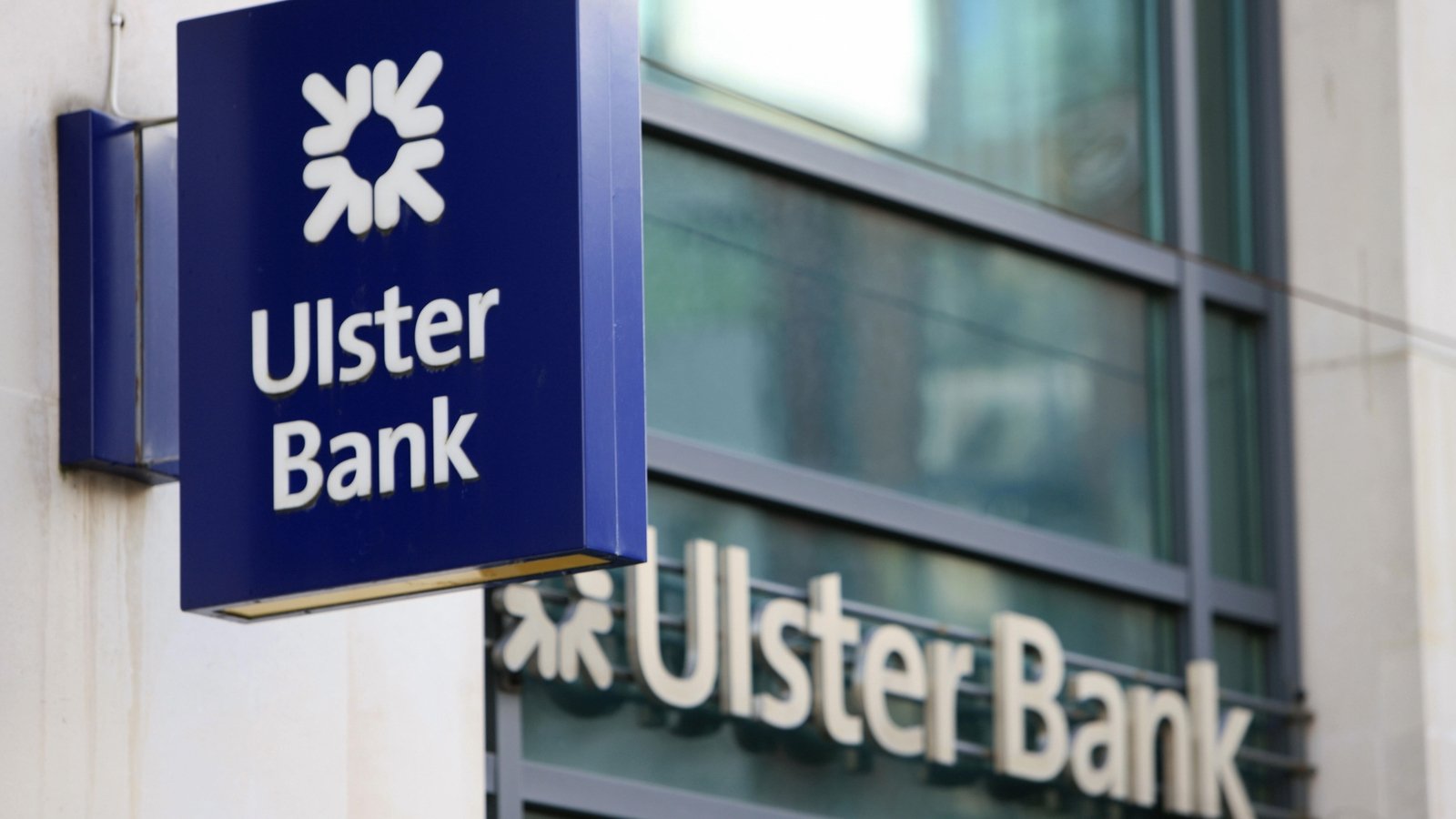 Ulster Bank is seeking 175 voluntary redundancies from its Irish workforce, with the cuts aimed at its manager grade or above.