“New administration”. Never mentioned Biden by name, not once…

Absolutely, definitely, totally a normal peaceful transfer of power to an incoming administration who feel utterly confident about the respect and love their 84 million voters have for them. For a virtual inauguration, in a “Greenzone” with over 25,000 National guard etc. as noted in other posts. Tomorrow is a very definite stay at home day.

Democrats are preparing the US Capitol for the inauguration of Joe Biden this week. Already the statement they and their allies are making to the American people is that “we fear you” and “we will crush any dissent.” In the days leading up to the...

“New administration”. Never mentioned Biden by name, not once…

Biden was also giving a speech today in Delaware, maybe around the same time as Trump, I read it only had a few thousand views, Trumps was over half a million on one YT channel, anyhoo, not many there in Delaware and security looks measures look lite enough.

Absolutely, definitely, totally a normal peaceful transfer of power to an incoming administration who feel utterly confident about the respect and love their 84 million voters have for them. For a virtual inauguration, in a “Greenzone” with over 25,000 National guard etc. as noted in other posts. Tomorrow is a very definite stay at home day.

That link has updated the story headline: 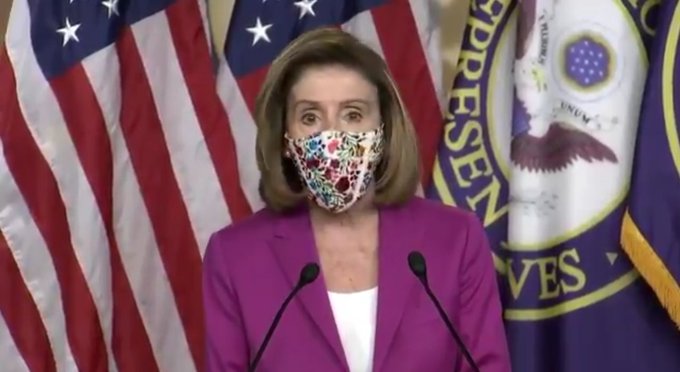 This post was updated after former Trump official said the request came from Nancy Pelosi and not Mayor Bowser Democrats are preparing the US Capitol for the inauguration of Joe Biden this week. Already the statement they and their allies are making...

Afaik Pelosi can not order anything, though I think she can request support to protect Capitol Hill as can the VPOTUS.

Let’s not forget that time, at the verglas minute, Trump grounding the plane as Pelosi and co were on coaches about to head off on a junket. She is not the head of the Military, the POTUS is which is still trump for a few more hours.

Some think Pelosi & Co have made enough seditious noises and requests at this point to justify a different course of action.

Every human life is a gift to the world.  Whether born or unborn, young or old, healthy or sick, every person is made in the holy image of God.  The Almigh

…NOW, THEREFORE, I, DONALD J. TRUMP, President of the United States of America, by virtue of the authority vested in me by the Constitution and the laws of the United States, do hereby proclaim January 22, 2021, as National Sanctity of Human Life Day. Today, I call on the Congress to join me in protecting and defending the dignity of every human life, including those not yet born.

Biden 1/10 to be sworn into office by February.

How does this make sense, surely almost free money? He could die, I suppose. That seem unlikely.

Now I wonder who Pelosi is really afraid of.

Firs we have the “graffiti” on her house

The new year brought a disturbing discovery at the San Francisco home of U.S. House of Representatives Speaker Nancy Pelosi, where, early Friday morning, vandals spray-painted her house and left a severed pig’s head in front of her garage.

Which was very strange. Firstly great care was taken only to spray paint the painted surfaces not the brickwork. Very easy to remove. Plus where were the Sec Service guys who are usually at the corner at Broadway. Feinsteins guys can be seen day and night at the entrance on Arguello

Then we have her laptop stolen by some Antifa type…

She's charged with "Aid Abet Others to Embezzle, Steal, Purloin," among other charges.

who out of the blue developed a huge interest in Trump and right wing groups. She is now charged as part of a conspiracy. She was probably the bag lady not the person who lifted the laptop.

Plus it seems there are a whole lot of really pissed off Guardsmen in DC. No prep made for them. Only prep for the usual 8K or so who usually turn up for an Inauguration. So the rest are sleeping on floors, no porta-potties, just MRE’s to eat, and most got no heads up beforehand so could do none of the usual home life preparation before deployment.

So at the moment Peolsi and her gang are easily the most hated people in DC. Trump still has a 51% approval rating. Among the NG guys currently freezing their asses off on the streets n DC I’d reckon at good 90% absolutely hate Pelois’s guts at the moment. Because she put them there. From what I hear the regular army guys are used to this kind of random shit but NG units, especially No-Go’s, are nt so probably not happy campers at the moment.

Lets hope no one throws a match into this exceptionally incendiary situation. All the MAGA folk have pretty much gone to ground to make it far more difficult for another “incident” to be manufactured. But they are mostly hunting folk so they know how to successfully bag a quarry. Unlike the other side they know the virtue of patience.

Mr Troy is an interesting player then. The serious stuff is out of his league, looks like a rich kid with a bunch of hobby companies. So I would expect a mix of mostly low grade real stuff with a bunch of placed material. He would also be somewhat credulous about the other side so would mix in noise of his own. In these sorts of stories there are a least several hundred strands going on at any give time some reinforcing some negating others on their own side, and on the other side too. Fog of war and all that.

Exactly. He was spotted a good while ago.

I think the main thing driving the Dem Party frantic paranoia is pure projection. What would we do if the election was stolen from us in such a blatant way. We see how they reacted in 2016 so they assume the other side will react even worse in 2020. Whereas in fact they will just lay low and play the long game. Unless another incident is concocted.

They did not see Trump coming form the very start and that has been the pattern.

Remember when Trump took out Solemani, and Pelosi had not a clue and went mad.

In a letter to Pelosi, the president “postponed” the trip just minutes before the congressional delegation was set to depart. The “excursion” would be rescheduled following the end of the partial government shutdown, he said.

“In light of the 800,000 great American workers not receiving pay, I am sure you would agree that postponing this public relations event is totally appropriate,” Trump wrote. “I also feel that, during this period, it would be better if you were in Washington negotiating with me and joining the Strong Border Security movement to end the Shutdown.”

While Trump pulled the plug on using military aircraft for the journey, he gave the Democratic leader the option of flying commercially.

Or anther example firing the firing of McCabe only days before he was about to qualify for a pension.

Then off the course the 11th hour appointment of the GOP lawyer to NSA.

That really rattled them. They’re rattled by something, I believe it is the unknown and it’s imminent delivery a the last minute.

Other fun fact, that laptop lady has handed herself in to the police. I expect that’s story to be disappeared.

Good point. Maybe this is the clean up operation which is a sign of confidence, less panic.

However today’s media indicates they are rattled still and are throwing out all the what-if’s - the MSM equivalent of chaff.

Just thinking back to the last Inauguration that had so much conspiracy swirling around it. In 1933. Except this time around half the population considers the election fraudulent. Not 20%. And Biden has to worry about his back far more than FDR did with the Al Smith crew. We already have proof that even Bidens dog is working for the party opposition.

Lets hope no one throws a match into this exceptionally incendiary situation. All the MAGA folk have pretty much gone to ground to make it far more difficult for another “incident” to be manufactured. But they are mostly hunting folk so they know how to successfully bag a quarry. Unlike the other side they know the virtue of patience.

Quick reminder some sources or intrigues might first get posted here news.thepropertypin.com minus any comment as a kind of repo of random crazy, and not all crazy random stuff makes it over here, which might surprise many, cause the random crazy is vast, VAST I tells ya!!!

Speaking of crazy random stuff, this is doing the rounds, an alleged TCM schedule of movies, but it’s not verifiable online if you are outside US.

So perhaps someone in the correct territory by whatever means, can verify this graphic below is actually the schedule today for movies on www.tcm.comor not - thanks in advance.

Here is a link to a LIVE feed, already 50K waiting/watching.

This wouldn’t be the #BuckleUP thread without at least one citation of a Q drop.

As Trump and Melania step aboard AF1 for the last time, the door closed and it prepares for take off. I am reminded of this ancient cyber-text.

POTUS will be well insulated/protected on AF1 and abroad (specific locations classified) while these operations are conducted due to the nature of the entrenchment. It is time to take back our country and make America great again. Let us salute and pray for the brave men and women in uniform who will undertake this assignment to bring forth peace, unity, and return power to the people.

It is our hope that this message reaches enough people to make a meaningful impact. We cannot yet telegraph this message through normal methods for reasons I’m sure everyone here can understand. Follow the questions from the previous thread(s) and remain calm, the primary targets are within DC and remain at the top (on both sides). The spill over in the streets will be quickly shut down. Look for more false flags – stay alert, be vigilant, and above all, please pray.

“For God so loved the world that he gave his one and only Son, that whoever believes in him shall not perish but have eternal life. Love is patient, love is kind.”

This is supposed to show AF1 live in eh air, must be a decoy possibly leaving from Reagan Airport.

“His one and only son”. Completely insane. The devotion to the con man is incredible.

What’s also insane is how a grown man can spray that much fake tan on his face. Christ he saved the most embarrasing triple coating of his tenure for his farewell.

Spotted watching live. Now the sun is reporting it as a “fiasco”.

DONALD Trump’s decision to skip Joe Biden’s inauguration has sparked “war-game” tactics as the traditional handover of the Presidential nuclear codes is cancelled. The outgoing president’s plan to …

“On 20 January, the extra footballs will be out of town somewhere with their designees, leaving just Mike Pence’s briefcase unless the White House Military Office has prepared, or already has on hand, another backup for Mr Biden.”

So if Mike Pence is going to the inauguration (thought reports indicated this), then his football could be transferred to Biden? I guess ideally there’s supposed to be a VP to VP transfer at the same time as well, but it’s a workaround for now?