Im sure with hindsight a piece as this from 6 days ago, now is clearly an awkwardly contrived paint-by-numbers pre-emptive hit-piece on the pantheon of raised strawmen - what it should demonstrate is in this information war the disinfo is so powerful it has to be believed as having some level of manifesting, since no-one really knows what is really going on, such pieces ended up being a total dud but also confirms the veracity of the conflict, i.e. you do not waste ammo shootin’ at ghosts:

QAnon supporters may try to pose as National Guard to infiltrate the inauguration, FBI says

The Federal Bureau of Investigations warned law enforcement on Monday that adherents to the QAnon conspiracy theory had discussed posing as members of the National Guard to infiltrate Joe Biden’s inauguration ceremony on Wednesday, the Washington Post reported.

Doing so, they believed, would help infiltrate the high-security areas of the inauguration.

The bureau’s report said the Guard had observed an increase in surveillance in the days following the Capitol Building insurrection. Guardsmen reported members of the public videotaping and recording their maneuvers, and noted that some of those tapes had made their way online.

The FBI warned that QAnon followers and other far-right groups could find National Guard uniforms at Army surplus stores or wear uniforms from past military service. Military garb is often worn at pro-Trump events, and wearing military tactical gear is common at Black Lives Matter counterprotests.

QAnon is a baseless far-right conspiracy theory that claims President Donald Trump is secretly fighting a “deep state” cabal of satanic pedophiles and cannibals. Followers of the theory have largely been banned from online platforms, though a new report from Politifact found that Q posts were still being shared across Facebook and Instagram.

The FBI report also noted that “lone wolves” and other types of conspiracy theorists may come out in full force during the inauguration. However, it did not cite any particular group, plan, or action.

…Rep. Steve Cohen of Tennessee appeared on CNN on Monday and suggested that many Guardsmen were Trump supporters who “might want to do something.”

"The [National] Guard is 90 some-odd percent male, and only about 20% of white males voted for Biden," he said. "You’ve got to figure that in the Guard, which is predominantly more conservative … they’re probably not more than 25% of the people there protecting us that voted for Biden. The other 75% are in the large class of folks that might want to do something."

The comment drew criticism from many of Cohen’s fellow lawmakers and Washington Post editor Glenn Kessler, who tweeted: “Hmmm, does a Democratic congressman really want to suggest that if you voted for Trump you might be a seditionist? What happened to the idea that military people are professionals and do their jobs regardless of political preferences?”

Security for the inauguration is being run by the Secret Service with participation from federal, state, and local law enforcement. Around 20,000 National Guardsmen are expected to be in DC to help monitor the inauguration and keep the peace.

On a technical point of cognitive orientation:

There is no QAnon, so there can be no supporters, or look at it a different way, the MSM appear to be the sole supporter of this QAnon.

The US MSM, not entirely happy they got their “peaceful transition of power”, appear obsessed with their QAnon bogeyman and demand people take it very seriously by continuing to give it air time.

Nothing will surprise me about the “R Williams” story. If you told me she was born a man I’d not be surprised.

I mean Pennsylvania care workers all know someone who knows someone in the KGB. Totally normal. 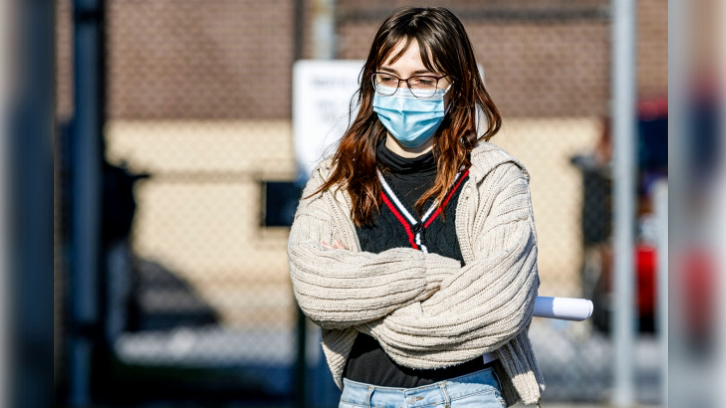 Riley Williams has taken out a restraining order against a “former abusive boyfriend” who told the FBI she planned to sell the House Speaker’s computer to a Russian spy agency.

A defense lawyer says a laptop stolen from the offices of House Speaker Nancy Pelosi during the U.S. Capitol attack hasn’t been recovered by investigators.

Very slick. Those guys are good. That’s the story disappeared.

So I’d love to know who financed the contractors who put at least one group of what looked like ten to twelve very well disciplined operatives outside the Capitol that morning. Most of AP’s looked like they were black bloc etc gene pool, same tactics, and a few freelance cassuer types in the mix but that column was in, act, disappear very fast. They looked like the only real pro’s on the Hill that day. Combat vets from Iraq who where there that day noticed them immediately as they were so out of place in the rest of the crowd, and so familiar from Iraq.

For some reason I suspect the answer will be found in the Friends of John Brennan circle. We are now very much beyond Howard Hunt territory by this stage. But exactly the same kind of people. The generations may change but the Swamp People always stay the same.

Getting back to earlier point or musings also made by @jmc my impression they’re all terrified of being McCain’d by the US Military.

Here is a fun piece which is an almost decent summary of the online speculations that been running rife, encouraged by those trying to explain Nancy’s seemingly demented behaviour earlier in the month. 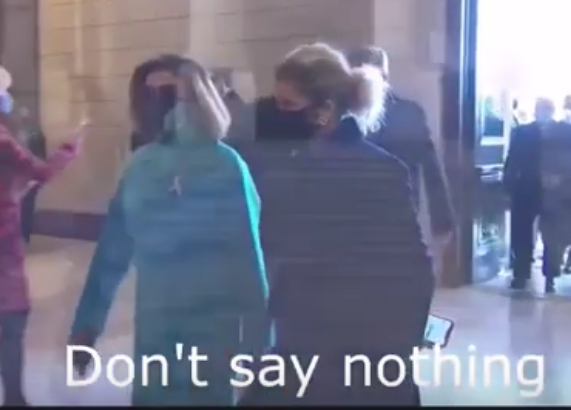 I guess the Dem’s and Co on Capitol Hill had better intel than all us nutbruegrs online, but not as good as you, 'cause they sure did #BuckleUP by surrounding themselves with as many troops as they could convince to stand guard.

What did they expect?

Plus, they plan to continue to #BuckleUP until March!

National Guard to remain in DC at least until March

Several planned protests in Washington DC will keep the National Guard in the nation’s capital at least into March, US Army officials said. At least 5,000 of the 25,000 troops deployed to the…

It’s like weird, DC, Ireland, Northern Ireland and who else is locked down until March?

The capitol’s security is breach proof, unless they were invited in or let in.

The process of inspecting the electroal college ballot ended when they invaded.

The capitol’s security is breach proof, unless they were invited in or let in.

The process of inspecting the electroal college ballot ended when they invaded.

Yea, imagine Trump supporters stopping one of the procedural events, where fraud might be stopped by the VP, thus helping Trumps case of massive fraud bit instead preventing a good hearing, makes total sense.

Uk locked down, Netherlands started curfew, which led to those riots…

There were lots of people in the corridors for Kavanagh’s SC nomination hearing! But yeah, they were let in I guess…

There has been some further suggestions of another “National Special Security Event”, justifying retention of the national gaurd, but according to Tom Cotton, there is nothing on the immediate horizon to support this. So that one on Capitol Hill all for #UnBucklingUP

Tom Cotton said there is no justifiable reason why thousands of National Guard members remain in Washington, D.C. as Republican lawmakers step up demands for their troops to return home.

Indeed they were let in, one assumes guests of the Democrat party who tried every obstructionist tactic to halt that confirmation hearing. That one Linda Sarsour in the public gallery was escorted from the chamber by security for creating a scene.

A second Capitol Police officer who responded to the riots has since died by suicide.

Acting Metropolitan Police Chief Robert J. Contee told the House Appropriations Committee on Tuesday that two police officers have died by suicide since responding to the riot at the Capitol on January 6, according to Contee's opening statement...

The problem with the quoted piece is it reads like someone who connects the dots and gets a picture of the Laughing Cavalier whereas in fact its really the picture of a Harlequin by Picasso.

If there is any multi-level play here its some faction playing off the Dems very real paranoia in a way that makes them look dangerous, stupid and weak. Having video of very slobbish looking NG troops on the streets of DC may play well to a very small part of the Dem voting demographic but to the rest of the electorate, not just the Republicans but the Independents, the optics for the Democrats are terrible. Just terrible. Only the Dem voters believe the MSM, a majority of Independents dont, and almost none of Republicans do. And the MAGA people just playing possum just adds to the utter ludicrousness of the Dems on the Hill.

If I wanted to discredit the Dems even more I would try to keep the NG on the streets of DC as long as possible without creating any direct incident. Any incident would help the Dems, but for other reasons the Dems dont want an incident either.

No matter which way you cut it there has been no Administration in the modern era that has got off to such a catastrophic start and looks so weak. The Chief of Staff has done a terrible job of shaping and orchestrating the first few weeks. Just compare with the brilliant job Rahm Emanuel did for Obama in 2009. No wonder Bidens positive rate keep going down.

The choice and order of the EO’s is just sad. You front load the widely popular less contentious ones and back load the ones that are obviously just simple pay back to special interest groups that finance the party. Biden has done the opposite. The setting aside of the Insulin price EO of Trump so early was beyond stupid. There is obviously no one with any political nous is in the Oval Office senior staff.

Anyway, the game is in play. And just like in 1973/74 its all gotten very crazy but none of the conspiracy guys have any real idea what is going on. They are all wearing blindfolds and are looking for an elephant because they were told an elephant is about. But its actually a hippo and the conspiracy guys are running round in circles chasing gnus and wildebeests. Blindfold.

So pretty much business as usual.

The problem with the quoted piece is it reads like someone who connects the dots and gets a picture of the Laughing Cavalier whereas in fact its really the picture of a Harlequin by Picasso.

Yea it’s not 100% (Capitol police conjecture is wrong methinks) but it gives a picture and sample of one of the many oddities people are witness to, or believe they are witness too.

Seen online, and first I’d heard of it tbh, although maybe it’s old news to others.

Yea the Winter White house, didn’t everyone know that?

What I didn’t know was that it had a SCIF. Interesting.

What is a SCIF?

What is a SCIF? - SCIF (Skiff) Definition - SCIF Global Technologies