What kind of switch-a-roo? You’re not still thinking that Trump’s returning to save the day?

Biden > Harris… but sure that was 30 days ago. It’s one of those speculations that has a cycle of about 2/3 month son the rumour mill wheel.

TBH I don’t think Mr T’s numbers and support has fallen all that much if at all. I think hey are still having the odd flotilla. He seems happy enough commenting for the winter winter whitehouse.

Why President Trump has HAD to endorse these deadly vaccines:

(1) He is part of a military operation

(2) The globalists’ plan involved starting COVID after the 2016 election (which they assumed Hillary would win). When she didn’t, they waited until the last year of DJT’s term to roll it out for several reasons:

(A) It provided cover for election fraud

(B) To start the depopulation

(3) DJT had to make a countermove: to get rid of COVID and all of the fear and control that goes with it, to expose Big Pharma, and to ensure a quick vaccine that (due to being rushed) would have to be labeled experimental and thus NOT be mandated

(A) Tell America that the vaccines are a Big Pharma / globalist plan to depopulate the world, or

(A) If he warned everyone, the media would mock him, call him a failure, hype COVID all the more, and demand a real vaccine. He wouldn’t be able to expose election fraud, make thousands of arrests, expose the Deep State plan, and turn things around on a wide scale with the public waking up. He would have had to stop the election fraud before it could be seen and take office for the second term, thus forcing his hand and resulting in chaos and an unavoidable civil war with the mainstream media stoking the flames and increasing public terror

(B) By endorsing it (but placing truthful info in alternative news sights), the Deep State’s vaccine HAD to remain experimental and thus NOT mandatory (which was NOT part of their plan). If DJT can turn this around on a wide scale in the upcoming month or so, he can stop the momentum, have WAY less deaths, and get the vaccinated sheep to med beds. In war, sometimes you have to choose between two bad options. Given the globalists’ strategy, DJT and the military chose the path with the fewest casualties, and that is to keep going with the facade of publicly endorsing the toxic (but NOT MANDATORY) vaccine. The alternative would have been FAR more deadly for all of us in so many ways. Had an approved MANDATED vaccine been created by the Deep State, it would be killing millions more right now. God bless America and the World.

Laughable that so many actually believe this stuff. Trump was an actor and he played his role well. I’ve zero interest in hearing what he has to say since being dumped out of office.

I’m still open minded about what exactly happened with Trump. His candidacy could have been a media/power elite plot designed to engineer what they thought would be a slam dunk victory for Hillary that went badly wrong or his entire presidency could have been designed to push nationalism and conservatism into a dead end. Face value (minus the q anon stuff) remains the most likely, although I am convinced he was swindled out of the election.

I’d say about 70/80 million US voters believe it or are happy to believe it as an explanation for his stance and interaction on the issue.

Plus they are mighty miffed and confused with Ivanka twitter shots photos - and now the second one! She’s certainly on message.

Lack of posting frequency does not mean need to Buckle up has receded, the very opposite, the most opposite in fact… if the analogy is not off the mark, think of it like a contraindication.

A. Washington D.C.
B. The Vatican
C. City of London 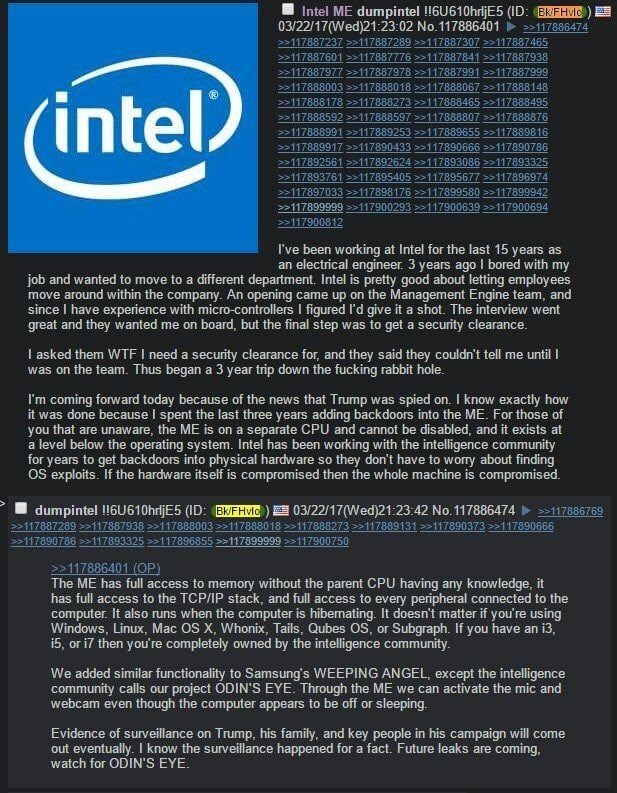 If its Management Engine then things may start to get a bit frisky.

Everything in that post could be true, it could also be a larp.

The ME has been upfront and very visible since it was introduced. And despite what he says can be disabled. During fab. Or with physical access and the right test equipment. The full setup is probably in the $200K range but can be rented.

Now the really fun part is that the actual hardware exploit built into all Intel x86 chips (but not AMD) since the days of the Pentium M is much more interesting. And was hiding in plain sight until it disappeared from the hardware manuals about 20 years ago. Unlike the ME there is no way of detecting the exploit. Without putting the hardware on a very expensive testing rig. Standard test equipment wont detect it. Unless you are very lucky. Or the exploit payload is very sloppy.

The same goes for Windows. The antitrust settlement request by the judge to break up MS was overturned by the White House for “national security reasons” i.e the one part of the Windows sources code MS have never shared with third parties, the network stack.

Which is why if you want a secure system you run a home rolled Linux on AMD/ARM hardware and run all comms through a hardware packet sniffer. Just in case.