The people who went grey in Jan are starting to really hunker down. What has happened in the last 14 days has all their alarm bells ringing. Not so much what has happened in Afghanistan but the utter implosion in “HQ” back in DC. The fact an O5 went public is a big deal. Who the O5 was who went public is an even bigger deal. The O6’s and above are now very seriously worried. All the politicals. This is very uncharted territory. How Lt. Col Scheller’s follow up statement ended with the Jefferson quote sends a very clear message. It means he is certain that he has totally support of all the people that matter. And the people at the top dont.

Given that Biden is stupid, stubborn and senile and surrounded by grovelling yes men who are now all scared shitless if he is going to be offed in a false flag it will happen soon. Otherwise it will be a health event. Everyone wants Biden buried yesterday. And it will happen one way or another.

The Swamp absolutely hated Trump but it is terrified of Biden. Of just how much damage he can do to their very cozy and lucrative scams. He could bring it all tumbling down around them. They need him gone. Now.

I listened to Bernie Sander’s with McWilliams.

Bernie was very excited about a number of leftish policies that were being pushed through.
For example barring a pharmaceutical company from doubling the price of medication for no reason.
Trying to end stratospheric student debt.

It’ll cost someone a lot of money, and that rarely goes down well in America. 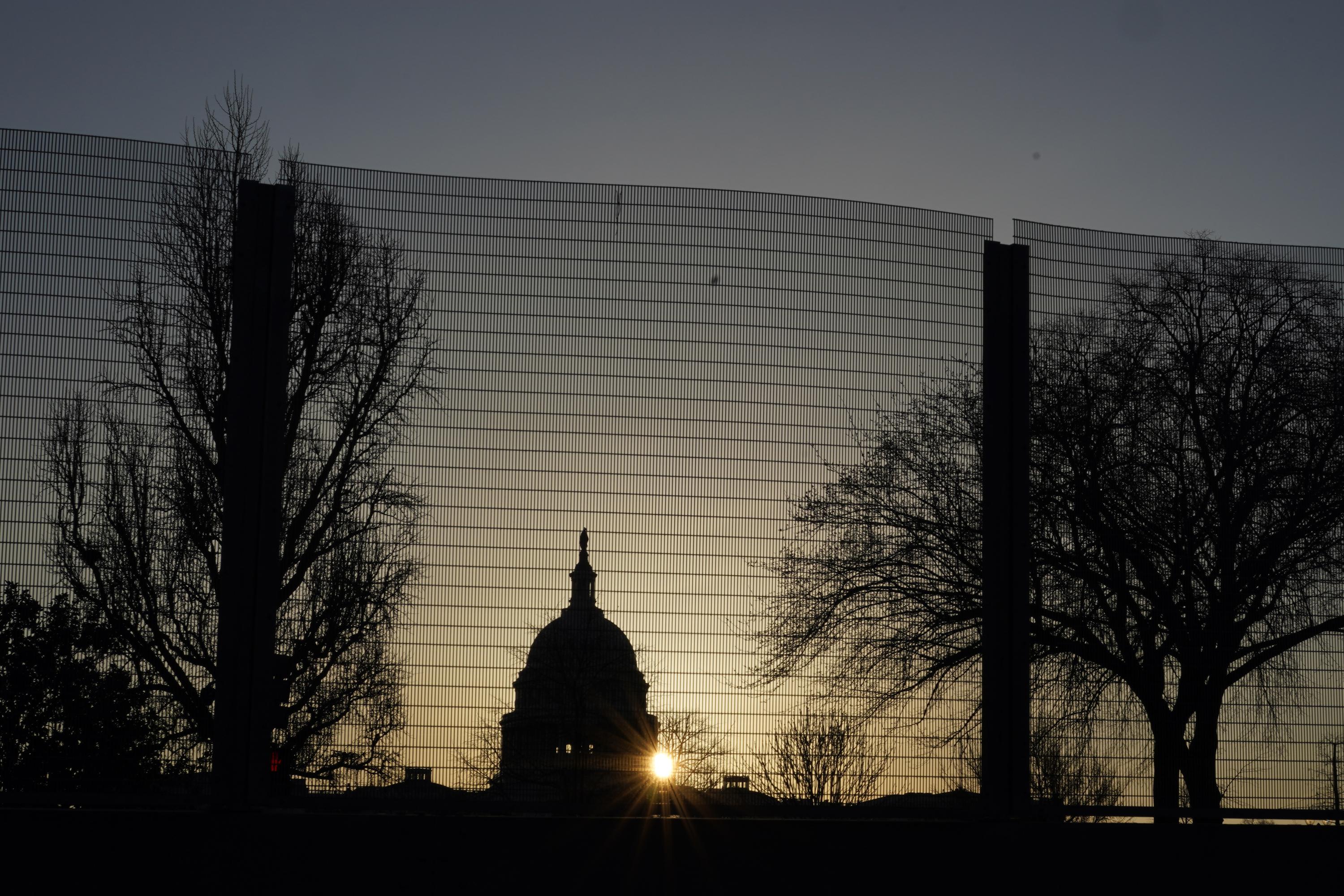 WASHINGTON (AP) — Far right extremist groups like the Proud Boys and Oath Keepers are planning to attend a rally later this month at the U.S. Capitol that is designed to demand “justice” for the hundreds of people who have been charged in connection...

Everyone legit has gone completely gray, hunkered down and waiting for incoming. Anyone involved in organizing a “rally” like this is either an a.p or a Fed. No one legit would get involved.

We are now very much in caudillo/junta territory by the stage with the Democratic Party.

Pretty egregious stuff. Notice they focus on Spicer & Conway because they’re the easiest propaganda targets. But actually theres a full clear out. McMaster is getting an honor as a “distinguished graduate” of West Point - still fired !

As defined by the United States Military Academy at West Point and the United States Naval Academy at Annapolis, the boards “inquire into morale and discipline, curriculum, instruction, physical equipment, fiscal affairs, academic methods and other matters”.
Each board has a mix of members of Congress and presidential appointees. Members appointed by Barack Obama remained in place under the Trump administration.

HR McMaster, a retired army general who was Trump’s second national security adviser, was appointed to the board at West Point, where he is scheduled to be honored this weekend, as a distinguished graduate.
At West Point, Trump also appointed Jack Keane, a retired general and close adviser; Guy Swan, a retired general; Douglas Macgregor, a retired colonel and Pentagon official; Meaghan Mobbs, a West Point graduate and psychologist; and David Urban, a West Point graduate, lobbyist, political strategist and sometime Trump adviser.
All were asked to step down or be fired. McMaster did not immediately comment. Keane said he was “very disappointed”. Urban told CNN he agreed with Mobbs, who said the move was “unconscionable”.

Britain’s Queen Elizabeth and the royal family are supporters of the Black Lives Matter ( BLM ) movement, one of her representatives has said. Ken Olisa, the first black Lord-Lieutenant for London …

The Queen and the royal family are supporters of the Black Lives Matter ( BLM ) movement, one of Her Majesty’s representatives has said. Sir Ken Olisa, the first black Lord-Lieutenant for London …

THE Queen and the Royal Family are supporters of the Black Lives Matter ( BLM ) movement, one of Her Majesty’s representatives has said. Sir Ken Olisa, the first black Lord-Lieutenant for London …

Britain’s Queen Elizabeth and the royal family are supporters of the Black Lives Matter ( BLM ) movement, one of her representatives has said. Ken Olisa, the first black Lord-Lieutenant for London, revealed to Channel 4 that he had discussed the topic of racism with members of the royal household in the wake of George Floyd’s murder in the US.

Reports are Biden is not going to turn up in person at any of the 9/11 site memorials. There will be a “video presence” instead. Given just how much hostile reactions he is getting wherever he goes hardly surprising. They cut short the hurricane area visit because there was such a negative reaction from the locals. There was even a op-ed in the Washington Post saying that Biden should not go to any of the memorials. His presence would be a desecration…

Faith no More - King For A Day Fool For A Lifetime

Show Of A Hell

Sure let’s throw in a 1 Year Delta to enhance Slow Joe’s incredible address.

The Kids be a trolling. Go Kids.

Edited to add. Even Vindman is saying he should resign, although maybe that’s to deflect from an alternative court-martial. But then there are those who think that colluding with China against the elected president is necessary for the greater good cos orange man bad.

Israel has confirmed that the victim of a plane crash in Greece was a witness in a trial involving former prime minister Benjamin Netanyahu, as Greek officials launched an inquiry.

Yea… Treason, generally so unorthodox it carries the death penalty.

The Mark Milley story is wild. How did Trump allow him to be in that position. The only explanation is Trump’s exaggerated respect for top brass - thinking they’re Eisenhower, Macarthur standard. They haven’t been in decades. The story shows Trump in a terrible light - just not in the way the media are saying.

General Marshall had to do a clear out of the army pre WW2, including firing old friends. Milley is someone whose career should have been destroyed totally.

Maybe it’s a case of giving them enough rope…

What in the f*cking hell?!

Pelosi needs to be questioned along with Milley.

Milley: “Madam Speaker, I agree with you on everything.” 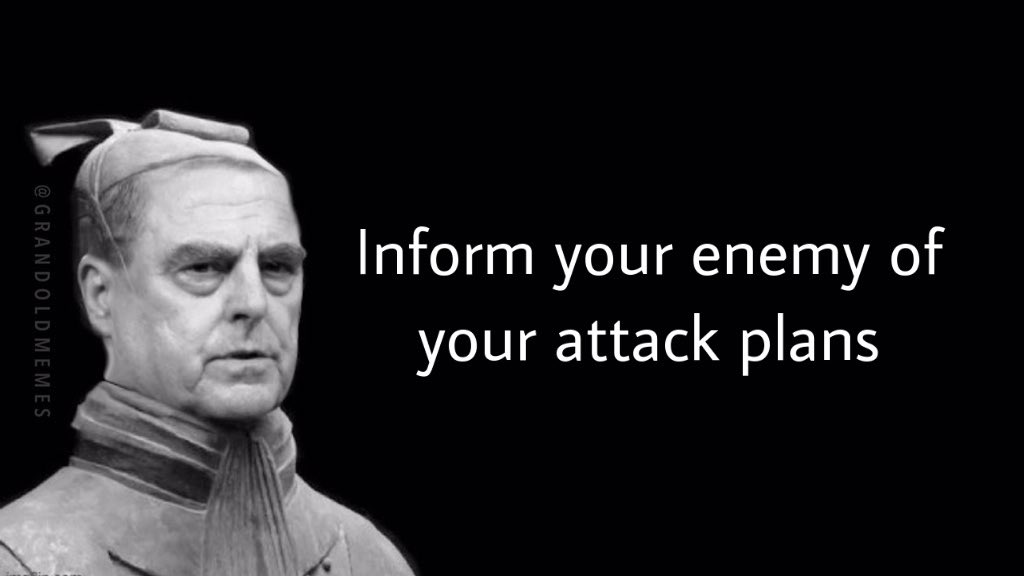 Sources familiar with the development said some members of cabinet were granted border exemptions to > urgently fly to Canberra for the hastily arranged meeting, which sources say will have international significance.

Defence Minister Peter Dutton and Foreign Minister Marise Payne, who are in Washington for a series of meetings over the next two days, were said to have joined the meeting via a secure connection.

Opposition Leader Anthony Albanese and three other senior members of his frontbench were also given the rare opportunity to be briefed on the highly sensitive matter.

Several Coalition MPs told this masthead they had been ordered at short-notice to dial into a rare conference call for 9.30am on Thursday, but none were aware of the reason for the briefing.

Australian and foreign diplomats will also be briefed on the development on Thursday.

The announcement, also significant to the United States and British governments, will be made at 7am Australian time.

Feel free to put this kind of MSM story in a context that makes sense of the whole.

One benefit of never admitting you lost a presidential election -- even though, of course, you did -- is that you can just keep on acting like the president.

The Hidden Kings. The deception could start earlier in 1963.

Or even earlier. Lincoln?