Colin Powell was the first Black US secretary of State and served in a number of Republican administrations.

This is to be celebrated for many reasons.

Tones is a globlaist handler general, has all his people in place to protect the project collateral globally, said so himself last year.

Ok. I give up. Alec Baldwin shooting a probable ex- Russian Spy was not on my bingocard for 2021

Originally from Ukraine, Halyna grew up on a Soviet military base in the Arctic Circle surrounded by reindeer and nuclear submarines. She holds a graduate degree in International Journalism from Kyiv National University in Ukraine and previously worked as an investigative journalist with British documentary productions in Europe.

The BBC showed a “documentary” about the Jan Riot on Capitol Hill a few days ago. Some HBO thing. The Guardian, NYT, Huff Post etc loved it. So that tells you all you need to know about it.

The first thing that struck me is the key character in the film, some policeman called Fanone, is like no other big city police officer I’ve ever met. At least uniformed. Even the undercover guys who do gang related work are not as sketchy as this guy. He has been DC PD for at least 15 years, not Capitol Police, but everything about him smells wrong. I’ve only known two sorts of people like him. Either ex-military people who had some pretty bad combat experience. Or people who have done time in prison. At no time has any military background been mentioned, it would have been if there had been any. So the guy is an ex-con. He has done time in prison. As to why there is an ex-con in the DC PD. That would make an interesting story.

So the Fanone guy is a fraud, one way or another.

His “beating” by the crowd was being knocked down in a melee and during the scuffle some guy set off his taser. Fanone was quickly picked up by some of the bystanders and moved out of harms way. Total time on the ground maybe 20 seconds.

I’ve watched video of the sustained and brutal beatings some police officers got in Seattle and Portland last year from Antifa rioters. Which the city DA’s refused to prosecute. That Fanone video is a joke in comparison.

The rest of the film is the usual lying by omission and elision. Either by tactical edits or making factual correct statements but leaving out key context. Like stating that one PD officer died but failing to mention his death had nothing to do with the riot. It was a prior condition. So just the usual self serving bullshit masquerading as an “objective” documentary.

Well it might be even weirder… saw these snapshots, unverified though. Trying to search - net is flooded with reports about the shooting…

So we are very much in Epstein type territory here. There are Clinton level unexplained deaths over the last few decades when it comes to this particular subject. Chris Cornells “suicide” being one of the higher profile examples. But the body count is well over a dozen by this stage when it comes to “sudden deaths” of people who decided to dig too deep into that particular Hollywood cesspit. Or helped those who did. Which sounds like Anthony Boudins mistake.

Once Sumner Redstone was dead I thought the story might get higher profile. He was not directly involved but he made sure the story and the people digging were buried. One way or another. What went on at Nickelodeon was only one part of the story but I dont see Viacom surviving very long, at least the Redstone control, if the full story of the widespread abuse and rape of kid actors and extras and more importantly the cover up ever got out. So a lot of people have beed silenced to make sure it does not. Mostly hush money and NDA’s but for those who dont get the message. Well accidents happen.

Same story at CBS, NBC news and CNN. At least in those cases the cover up is of adult assaults and rapes. Not kids. CNN is the most interested case as it was run for the last decade by a Reality TV guy, Jeff Zucker, with no background in news. None. He had no problems makng “problems” disappear when he ran CNN. Interesting fact about Zucker. The Reality TV show that made Zuckers career at NBC was a certain hit show called The Apprentice. Starring someone called Donald Trump…

Which is why CNN after 2016 was pure Reality show content. Zero factual news. Because thats the kind of guy who ran it.

Good video on being asleep or awake…

Why Are You Awake When So Many Aren't?

Those in control desperately want us all vaxxed as soon as possible. Why is this? And why are you awake to the agenda, while so many choose to be asleep? There are five major points awake people understand that asleep people do not. Here they ar…

Avicii & Bennington were two more names I think? Also Paul Walker from fast & furious had spent some time in Haiti and did fund-raising for one of the relief effort NGOs.

Brilliant. Absolutely right. It has already happened, I’m getting messages about people basically on 2 different density fractals. Wouldn’t you think the separation was planned? The SYSTEM controls all the communication channels. The information was not that hard to find, but was ignored by huge majority here in Ireland.

Brilliant. Absolutely right. It has already happened, I’m getting messages about people basically on 2 different density fractals. Wouldn’t you think the separation was planned? The SYSTEM controls all the communication channels. The information was not that hard to find, but was ignored by huge majority here in Ireland.

The Menace controls that which it can pay to play only, and it is not really that much in truth.

The revelation of the puppies experiments has turned many but this was only the opening act., though enough to turn most. A strong stomach from here on out is required, braced by all that Mental preparation, but without an open heart, how do you expect to get through all of this?

The massive dump of emails from Dr. Anthony Fauci as they pertain to the coronavirus being "potentially engineered" and Fauci's fixation with gain of function research is suspect enough. As

“Moreover, I will give you a new heart and put a new spirit within you; and I will remove the heart of stone from your flesh and give you a heart of flesh.”

Yea, the dam is breaking. 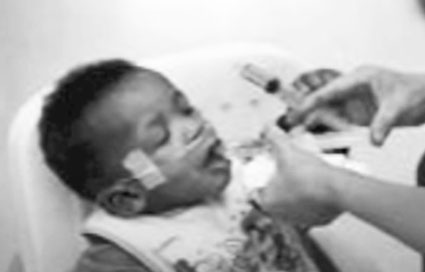 by WorldTribune Staff, October 26, 2021 Dr. Anthony Fauci's National Institutes of Health (NIH) approved drug trial experiments on hundreds of AIDS orphans in New York City. Over 200 of the orphans died during or after the experiments, according...

In New York’s Washington Heights is a 4-story brick building called Incarnation Children’s Center (ICC). This former convent houses a revolving stable of children who’ve been removed from their own homes by the Agency for Child Services. These children are black, Hispanic and poor. Many of their mothers had a history of drug abuse and have died. Once taken into ICC, the children become subjects of drug trials sponsored by NIAID (National Institute of Allergies and Infectious Disease, a division of the NIH), NICHD (the National Institute of Child Health and Human Development) in conjunction with some of the world’s largest pharmaceutical companies – GlaxoSmithKline, Pfizer, Genentech, Chiron/Biocine and others.

The drugs being given to the children are toxic – they’re known to cause genetic mutation, organ failure, bone marrow death, bodily deformations, brain damage and fatal skin disorders. If the children refuse the drugs, they’re held down and have them force fed. If the children continue to resist, they’re taken to Columbia Presbyterian hospital where a surgeon puts a plastic tube through their abdominal wall into their stomachs. From then on, the drugs are injected directly into their intestines.

In 2003, two children, ages 6 and 12, had debilitating strokes due to drug toxicities. The 6-year-old went blind. They both died shortly after. Another 14-year old died recently. An 8-year-old boy had two plastic surgeries to remove large, fatty, drug-induced lumps from his neck.

This isn’t science fiction. This is AIDS research. The children at ICC were born to mothers who tested HIV positive, or who themselves tested positive. However, neither parents nor children were told a crucial fact – HIV tests are extremely inaccurate.(1,2) The HIV test cross-reacts with nearly seventy commonly-occurring conditions, giving false positive results. These conditions include common colds, herpes, hepatitis, tuberculosis, drug abuse, inoculations and most troublingly, current and prior pregnancy.(3,4,5) This is a double inaccuracy, because the factors that cause false positives in pregnant mothers can be passed to their children – who are given the same false diagnosis.

Most of us have never heard this before. It’s undoubtedly the biggest secret in medicine. However, it’s well known among HIV researchers that HIV tests are extremely inaccurate – but the researchers don’t tell the doctors, and they certainly don’t tell the children at ICC, who serve as test animals for the next generation of AIDS drugs. ICC is run by Columbia University’s Presbyterian Hospital in affiliation with Catholic Home Charities through the Archdiocese of New York.

Bold: That be the PCR causing mayhem and social collapse back in the day, as it has been used to do now.

10 years ago, in 2003, 04, 05, I was investigating this story. Children in an NYC orphanage (and the foster care system) used in clinical trials. The Associated Press took it national and found it going on in seven or more states.

"Some states declined to participate in medical experiments. Tennessee said its foster care rules generally prohibit enlisting children in such trials. California requires a judge’s order. And Wisconsin “has absolutely never allowed, nor would we even consider, any clinical experiments with the children in our foster care system,” spokeswoman Stephanie Marquis said.

Officials estimated that 5 percent to 10 percent of the 13,878 children enrolled in pediatric AIDS studies funded by NIH since the late 1980s were in foster care. More than two dozen Illinois foster children remain in studies today. "

No medical records were ever made available to official investigators.

Up to 12,000 Air Force personnel have rejected orders to get fully vaccinated against the coronavirus despite a Pentagon mandate and officials say it is too late for them to do so by Tuesday’s deadline, posing a first major test for military leaders whose August directive has been met with defiance among a segment of the force.

From a friend in NYPD:

This is the line at an NYPD station of officers lined up to go out sick tomorrow as that’s the deadline for the vaccination.

On Sunday, Elon Musk left UN bosses in shock when he openly revealed a vast pedophilia network run by UN officials. Elon Musk questioned the UN over its child

Thats quite a collection of utterly vile horrifically abusive psychopaths.