There’s an irony here. Isn’t your reaction the very definition of being triggered, with all due respect?

I’m actually finding this amazing and hilarious in equal measures.

I’m actually finding this amazing and hilarious in equal measures.

Oh ok. So you are simply screwing around by wandering into various threads decrying the ills of linguistic diversity and shorthand, sliding topics and maybe even some passive trolling, all for your own personal shits and giggles.

That kind of bollox triggers moderation and bans, funny thing that.

I have seen some disgusting comments, and downright offensive opinions, all over this forum.

I don’t think I have ever asked for someone to be put in a “safe space”, however. Nor do I see those posters banned for 2 weeks either.

Why are certain comments accepted, and others deemed as trolling? It depends on where you are on the political spectrum. Everyone has a bias.

Hence the “amazing and hilarious” comment. The pin is often an echo chamber of the kind that posters on this forum decry. The slant on the pin is painfully obvious. Should it all be one way?

Nonetheless, I’m probably going to stay away from that side of the Pin now - some people are, ironically, far too sensitive. The far most useful part is the Coronavirus thread, I think I’ll stick to that. For now.

Back in the saddle

HarperCollins has dropped David Starkey as an author, saying that the racist views the bestselling historian expressed in a recent interview were “abhorrent”.

On Thursday, Starkey told the rightwing commentator Darren Grimes that “slavery was not genocide, otherwise there wouldn’t be so many damn blacks in Africa or in Britain would there? You know, an awful lot of them survived.”

Following widespread condemnation – former chancellor Sajid Javid described the comments as racist and “a reminder of the appalling views that still exist” in Britain, while the historian David Olusoga said they were “truly disgusting” – HarperCollins UK said it would not be publishing any further books by Starkey.

“The views expressed by David Starkey in his recent interview are abhorrent and we unreservedly condemn them,” said the publisher. “Our last book with the author was in 2010, and we will not be publishing further books with him. We are reviewing his existing backlist in light of his comments and views.”

Starkey was signed by HarperCollins in a four-book deal in 2006, publishing titles including Monarchy: Behind the Royal Mask from the Tudors to the Present, and Henry: Virtuous Prince, the first in a planned two-part biography of Henry VIII. It is understood that the other two titles in the deal, which included the second part of Starkey’s biography, will no longer be published by HarperCollins. The book is currently listed online as coming out in September.

On Thursday, Starkey also resigned from his honorary fellowship at Fitzwilliam College at Cambridge.

A statement from the college on Friday said: “The Master has accepted Dr David Starkey’s resignation of his honorary fellowship with immediate effect.

“Fitzwilliam prides itself in leading the way in Cambridge in opening access to higher education for under-represented groups. Our student and academic bodies are diverse and welcoming to all. We do not tolerate racism.”

They added: “Honorary fellows have the same responsibility as all members of our college to uphold our values.”

Prof Rama Thirunamachandran, vice-chancellor of Canterbury Christ Church University, apologised to staff and students at the university in Kent who have been offended and upset by the “appalling” comments.

He said: “Widely reported comments by historian David Starkey during a recent online interview are, in our view, completely unacceptable and do not reflect the values of our university and community.”

This is not the first time Starkey has been criticised for his remarks on race. Following the summer riots in 2011, he told BBC Newsnight that “a substantial amount of the chavs have become black. The whites have become black; a particular sort of violent destructive, nihilistic gangster culture has become the fashion.”

This is not the first time Starkey has been criticised for his remarks on race. Following the summer riots in 2011, he told BBC Newsnight that “a substantial amount of the chavs have become black. The whites have become black; a particular sort of violent destructive, nihilistic gangster culture has become the fashion.”

Perceptive for a 2011 view. More broadly understood as correct now.

He looks like he needs to step back/away for his own sanity. Goes to show how bloody difficult it is to oppose the consensus.

A consensus that has been very carefully managed and nurtured by a very vocal minority that can be mobilised at the flick of a switch!

The federal government has approved a new strategy for fighting gender inequality, the first of its kind in Germany. The 9-part plan aims to reduce the gender pay gap and require more women in leadership positions.

But will this address the inequality in numbers of female in roles like welders…where women are only 4% of the workforce?

There’s a Shortage of Welders. Will More Women Fill the Gap?

Past efforts to attract women to welding have had underwhelming results. New programs aim to change that.

All of this is but an illustration of Pascal’s great dictum that should be inscribed over the gates of every university, that we should labor to think well, for thinking well is the principle or precondition of morality. 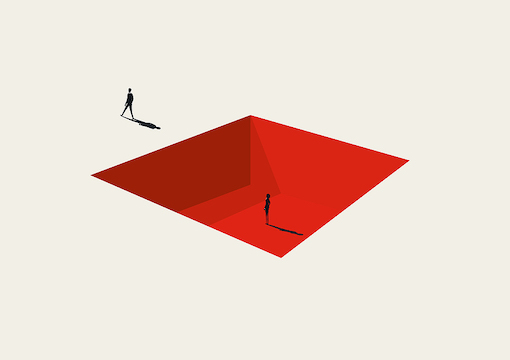 Fuzzy thought, the substitution of supposedly generous ideas for real reflection, is to be combatted not by equal but opposite sloganeering, but by rational argument.

This time three years ago, I was a well-known journalist in Ireland, with a modest profile in Britain. On the last weekend of July, on the basis of a poorly written column in the Irish edition of the Sunday Times about the pay differentials in the BBC, London social media vilified me. I was then denounced worldwide as a misogynistic, anti-Semitic Holocaust-denier. One of my most successful accusers was J.K. Rowling. And now it is her turn, as her entirely justifiable scepticism over the dogmas of transgenderism have rendered her into what she is clearly not, that mythical beast, a ‘transphobe’. So welcome to the world you helped create, J.K. 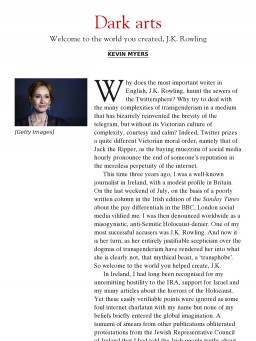 Why does the most important writer in English, J.K. Rowling, haunt the sewers of the Twittersphere? Why try to deal with the many complexities of transgenderism in a medium that has bizarrely reinvented the brevity of the telegram, but with

fcking hell. the pot calls the kettle black. This is Kevin fcking Myers we’re talking about here ? HE IS ONE OF THE HIGH KINGS OF ORIGINAL CANCEL CULTURE

In Ireland, I had long been recognised for my unremitting hostility to the IRA

A ghoulish Ziggurat where reputations are ruined

constant support for the Section 31 Broadcasting ban. WHICH WAS STATE MANDATED AND JOURNALIST SUPPORTED “CANCEL CULTURE” FOR “HATE SPEECH”

I think reasonable people would agree there’s a difference between advocating for a guerilla war in which actual people were dying, and having the temerity to suggest that a man who lops off his penis might not be a woman.

I think reasonable people ought to agree that it’s far worse to shut down discussion on state backed death squads than it is to shout at people on Twitter & upset them.

World Rugby is considering banning trans women from playing women’s rugby because of significant safety concerns that have emerged following recent research, a decision that would make it the first international sports federation to go down that path.

Golfgate is high farce and the hypocrisy levels are astounding…

However, isnt it unusual that it has been reported upon and pursued with such gusto by the usually compliant media?

What are the chances that someone saw an opportunity to out a certain type of character thats no longer deemed ‘current’ on this island. All those involved certainly seem to be cut from a particular type of cloth. Not really the most ‘progressive’ members of our political elite.

Maybe im over thinking it. Or maybe not…

Cancel Culture strikes again. This story’s quite an eye-opener … listen to the first six minutes if you don’t have time for the lot.