Your freedom, pay as you don’t go.

Hospital Admission for December up to the 30th

8714 confirmed positive tests in the last week according to figures reported each night for the past week. Yet the Covid app says “In the last 7 days” Tests completed 103,883 and positive rate 13.1%. 13.1% of 103,883 is actually 13608. Are we getting the same guys who audited Anglo to do the figure? Does anyone know what is actually going on?

RTE also have this classic. “the five-day average now stands at 1,279 cases per 100,000 people.” rather than the 5 day average now stands at 1,279 cases. There’s no point complaining to RTE though as their PR will spin it that they do the best that they can with what limited resources they have. An urgent increase in the licence fee is needed if RTE is to maintain high standards. Heaven forbid their “journalists” check a story they file themselves. 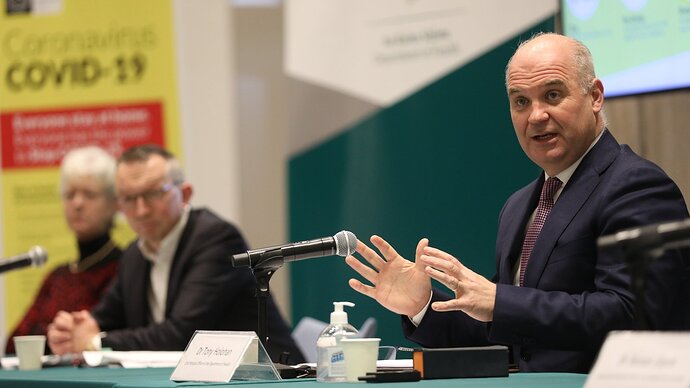 Close contacts of Covid cases not advised to seek tests

There have been 1,620 new cases of Covid-19 reported by the Department of Health, as well as 12 further deaths.

During the SARs CoV 1 outbreak in 2003 only one of the cluster outbreaks outside China (Amoy Gardens) did not involve either a hospital or medical staff. In all cases hospitals were the primary transmission vector. The hospital with the lowest transmission rate was the one hospital that was an old style hospital (no air con etc) in Hanoi.

This time around for the vast majority of early cases in the West it was hospitals that were the primary infection vector for large cluster outbreaks. And the one population who have by far the highest rate of admittance to hospitals are old people who live in cares homes. So the two biggest physical location vectors by a wide margin for actual SARs CoV 2 infections are directly connected with hospitals and medical staff.

This book has a good description of the process in Hong Kong hospitals in 2003 as they only got the hospital centered infection sources under control by going back to old style hospital antiseptic environment procedures. Just like they used before the 1970’s.

I strongly suspect that if we had old style hospitals, all tile walls and lino, smelling of medical alcohol and ruled with a rod iron by an old style ward-sister, that the number of SARs CoV 2 cased would have been a hell of a lot lower. Very small indeed.

I agree whole heatedly with the bits of the previous post that apply to this outbreak and Ireland. It seems likely to me that one potential way it got into nursing home’s was hospitals infecting then releasing patients into nursing homes created a near perfect storm. (Nursing Homes Ireland blocking visits was the one thing that stopped it being worse in the first wave). Air con rather than cross ventilation by windows and drafts made matters worse.
Anecdotal evidence but a nurse told me years back that hygiene reports in hospitals are routinely ignored. Mentioned doctors eating in canteen without changing blood stained scrubs. We’d have had a hell of a lot less MRSA too if we had militaristic ward-sisters in charge of hygiene.
Still we can have a hospital “cleaned cheaply” by outsourcing the job to cleaning companies that pay f all. What turnover is there of cleaning staff? What training do cleaning staff get? Are they given enough time to clean an area properly?

If you are a Chef or other Kitchen Staff worker it is illegal for you to wear your PPE uniform outside of your workplace. You must change and dress in an appropriate changing room.

Nurses, doctors etc. Nah, come as you are.

The countries which put a great effort into reducing HAI rates over the last decade or two had the best survival rates, those that did not have pretty bad survival rates. Some countries have ICU mortality rates two or three times higher than neighboring countries, all down to HAI rates. In some countries the single most effective treatment for someone in ICU is to pump them full of antibiotics. Because of the HAI’s.

Total Hospital confirmed cases, going from 454 yesterday to 491 today, is an increase of 37, minus the 10 net, are we left with the bulk of the increased cases, 27, all being existing hospital based admission converting to the C19 list after a time, which is approx 73% of the confirmed rises in cases presently in the hospital system.

That can’t be right can it?

Todays latest figures tells us that we have a net increase of C19 Hospital admissions of 10, from an actual total of 51.

Latest daily cases recorded are 1,620, of which 1,569 are not overwhelming the Hospital system.

Is that a fair assessment or statement based on the current official figures?

A post was split to a new topic: The Push for Vaccine Passports is ON!

A post was split to a new topic: Manipulation of The Daily Reality - The Media is the Virus

9 posts were split to a new topic: Kinzengate

A post was merged into an existing topic: Omicron 2021

8 posts were merged into an existing topic: Kung Flu - Gaming the Matrix?

A post was merged into an existing topic: The Pandemic Is Over