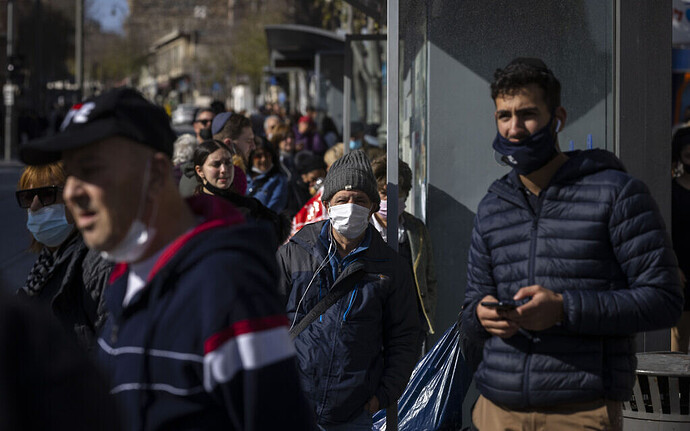 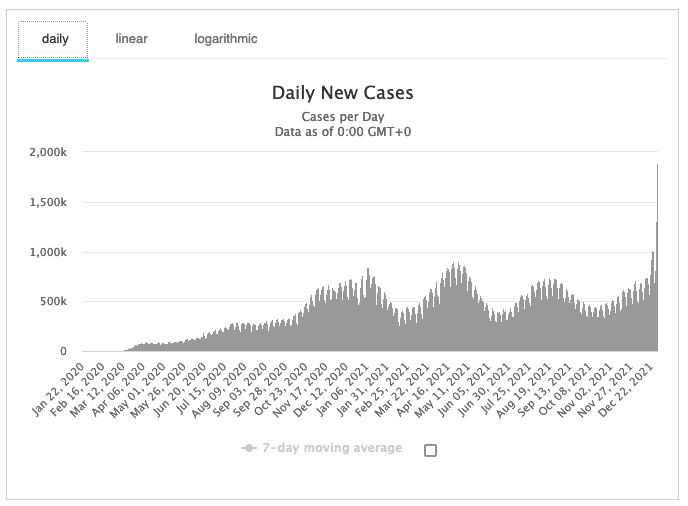 The chief medical officer, Dr Tony Holohan has said the reopening of schools next week will remain under review, however, the plan at present is that they will return as planned.

Speaking on RTÉ Radio’s Morning Ireland, Dr Holohan also admitted that if the Omicron surge continues then “it may well be the case” that the current advice on antigen testing may need to change.

Dr Holohan said case numbers for school age groups had been falling in December, adding that he was not aware of any other country which had moved to close schools.

Hey Tones, perhaps that’s because for some weird reason in December children are on Holidays for a few weeks, free from the daily Tones Torture Tests!

On the school tangent, maybe someone can confirm this - is it true when a teacher books a bogus PCR test, when they input their career, the “close contacts” fields are not available to them, sounds innovative no?

Well the usual Christmas day backlog is pumping up the figures, also “deaths” dropped a bit down to 22, IIRC same happened last year or some weirdness in reporting lag, but what happens is Death exploded in Janury 2021.

Dr. TonesDeaf & Co might report these in the new year to pump up the fear, there is the January UnSurprise Surprise to fulfill, so expect the expected!

Testing volume has never been higher. It’s official. All records broken. The greatest!

In the year of the Great Genocidal Genetic Injection Rape & Pillage:

Casedemic explosion, soon they’ll have to decide whether to allow all businesses to shut down due to positive cases or abandon the “self isolation” rules!

Tánaiste Leo Varadkar said “this is not the Christmas we expected” and it’s “beyond our worst fears” in a message to the hospitality sector.
He said that “the Omicron wave is going to come hard and fast, cases will break all records, perhaps as soon as next week”.
"There will be dark days in January again.
"I can’t promise that next summer or Christmas will be better but I promise we will do everything we can.
“I didn’t think it would go on this long, it has gone on for 2 years and can go on for several years, it has been a long war,” he added.

Complete failure of the vaccination strategy

It would be preferable they did nothing at all ever, ever again, but it may be far too late for that for many.

Fauci Goes There: Finally Admits Kids Not Being Hospitalized From COVID

For the past 18 months we’ve reported how a large percentage of those ‘hospitalized with Covid’ were actually admitted for other ailments, only to test positive after admission during routine screening - meaning ‘Covid hospitalizations’ for the purposes of policymaking (and fear mongering) were vastly overstated in many (if not most) cases.

Public health officials have largely avoided this important distinction, while pushing the false narrative over hospitalizations - until now.

In a Thursday appearance on MSNBC , America’s top Covid official, Dr. Anthony Fauci, admitted to a distinction between the number of children hospitalized with Covid as opposed to " because of Covid. "

“And what we mean by that: If a child goes into the hospital, they automatically get tested for COVID and they get counted as a COVID-hospitalized individual, when, in fact, they may go in for a broken leg or appendicitis or something like that . So it’s over counting the number of children who are, quote, hospitalized with COVID as opposed to because of COVID,” said Fauci.

Robert Malone on Roegan now, this may be a live link. Don’t use Spotify. 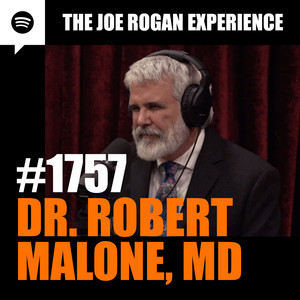 Listen to this episode from The Joe Rogan Experience on Spotify. Dr. Robert Malone is the inventor of the nine original mRNA vaccine patents, which were originally filed in 1989 (including both the idea of mRNA vaccines and the original proof of...

More of that inclusive language, also known as hate speech, a derivative of freedom of speech and expression. More I say, more freedom of expression please! Freedom of speech for the whole world! More more more everyone bake your freedom cake and talk with mouthfuls of gloriously delicious freedom!

Its the greatest taste in the world!

Just a reminder that apart from April 2020 (due to SARs CoV 2) and January 2021 (due to vaccination of sick old people) monthly death rates in Ireland for the last two years have all been within the 5 year range and all well within the 10 year range .

From the mortality statistics there was technically no pandemic, epidemiological speaking. Monthly morality rates would have to be well above the 10 year range for at least 4 to 6 months to be an actual pandemic. Like 1968/69 or 1957/58. 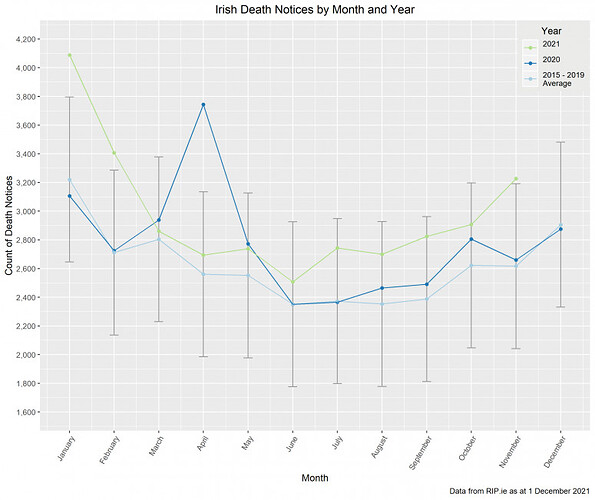 Christmas period sees more Covid cases than all of 2020

No mention of the YoY figures, because that’s fully awkward.

Note: Some figure made have been marginally revised.

I would say the slaves figured out putting the morgellon stick in the nostril will give couple of paid days of.

Some nice lyyynk I’ve found due to the family member suffering from Vaxx Spikes (first page of Google usually it would be down 20 pages)… sure morgellons are just a conspiracy and Lyme disease doesn’t come from Fort Detrick.
https://www.google.com/url?sa=t&source=web&rct=j&url=https://bmcdermatol.biomedcentral.com/track/pdf/10.1186/s12895-015-0023-0.pdf&ved=2ahUKEwi665yus5H1AhVeQUEAHVLJCkUQFnoECAYQAQ&usg=AOvVaw2-9Ld8pEaNdJU2xwxcsU1N

At a location far, far away where 100% have been vaxxed for months, it arrives! 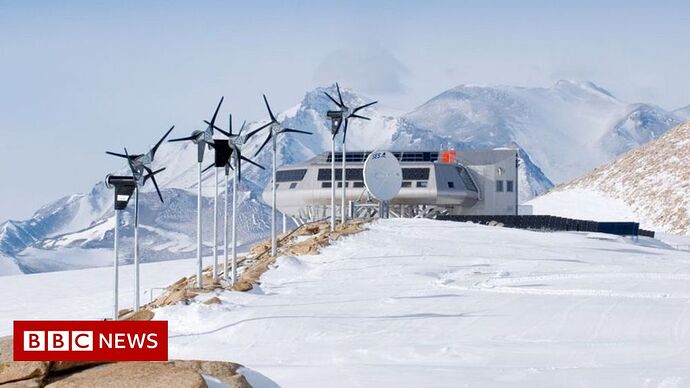 Eleven staff members at the station were infected but officials say the situation is not serious.

Was it not where the WEF Klaus Schwab You’ll Own Nothing, Greta Save the Planet and other Rothschild’s minions were hiding on Omicron Island? Some coincidence. Brilliant. 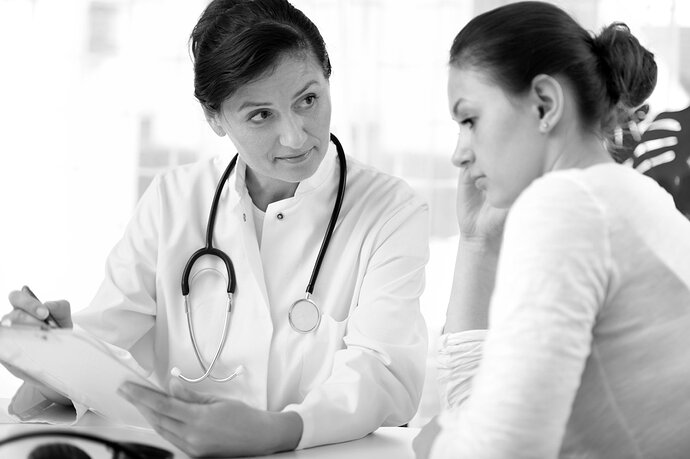 The top post of 2021: Why have we doctors been silent? - The Conservative Woman

The top post of 2021: Why have we doctors been silent?

Fear is The Mind Killer

I was writing a post in my head early yesterday that never had the chance to occur, about how all of the “attack of the virus” event, was prefaced and enabled through trauma based mind control, has been from the beginning, a diabolical symphony of fear and loathing beamed at people 24/7, a theatre of nightmare, to scare all the little children, as a kind of reminder in case anyone forgot - but this piece among the many excellent points, deals with exactly this phenomenon in very astute terms at one point:

It is typically those of us most conditioned by the expectations of society, utterly obedient and deferent to authority, who gain entry to medicine. One can see the path: we were good, compliant children and then good, compliant students. Now we are good, compliant doctors. I’m beginning to understand that goodness is measured in a different way, and obedience is not a virtue.

Obedience is learned through fear, threat and intimidation; it is in fact trauma programming and achieved through small control gestures when we were young and helpless. Now we are adults but still operating under these childhood programmes of beliefs and fears. We still feel helpless and beholden to a higher authority. We still submit to an authoritative decree even when it overrides our inherent moral compass.

The horrors of the classic Milgram experiment demonstrated that we live in a deeply traumatised culture, and the same conditioning, in my view, has shaped the medical community and its silence.

You have been condition to love the hammer and know your place among nails.