I’m simply referring to the ACE2 and male ratio as subjects, not the mortality rates or the accuracy. The information flow is fairly intense around this one, and it has a very different spin to it.

For the moment I’d be wary. The report says:

A comparison between eight individual samples demonstrated that the Asian male one has an extremely large number of ACE2-expressing cells in the lung.

We also noticed that the only Asian donor (male) has a much higher ACE2-expressing cell ratio than white and African American donors (2.50% vs. 0.47% of all cells). This might explain the observation that the new Coronavirus pandemic and previous SARS-Cov pandemic are concentrated in the Asian area.

Much more needs to be done if we are to take this as fact. It’s just intriguing for the moment.

And another video footage of Chinese government officials sealing of a door of a resident living in a apartment in the #Hubei province, having been infected with the #CoronaVirus in #China.

And a other video footage of Chinese military shutting a door of the main entrance of an entire apartment building somewhere in the #Hubei province in #China, after at least 1 or more people have been diagnosed with the #CoronaVirus.

The authorities hunt for people from Wuhan, the center of the outbreak, encouraging citizens to inform on others. Even those without symptoms are being ostracized.

NSW Health Minister Brad Hazzard stressed that visitors from China with symptoms could present to any public hospital in the state at no cost.

“If you don’t have travel insurance, you won’t need it, because we’re making sure that the tab will be picked up by the Government,” he said.

A 21-year-old woman who returned from China last week and has been staying in university accommodation is confirmed as the fourth case of coronavirus in Sydney. 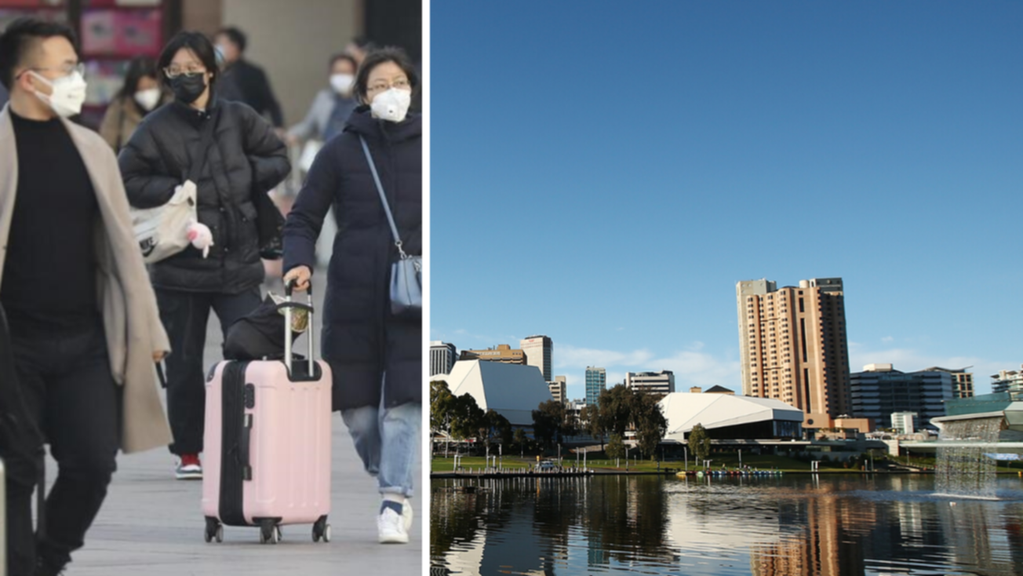 After initially claiming they had self-isolated, it has now emerged an infected couple spent two days travelling around the city.

A real estate agency in Adelaide has temporarily closed and staff are in self-imposed quarantine after finding out South Australia’s two confirmed coronavirus victims attended one of their auctions in the last fortnight.

Wow, so 2 weeks later people now have this information. Anyone on the plane (even those who got the return flight, fomites), anyone in the airport, taxi’s, buses, auction, shops, is potentially at risk. That’s a long time ago. Completely inevitable now that this goes exponential in Australia. Think of how many other similar stories to this there is around the world.

I honestly believe that the WHO realized very quickly that stopping people getting this was impossible and slowing it down would require a complete shutdown of the world.

On a brighter note, recovery rates are increasing. For some reason there are no deaths yet in Zhejiang with 829 infections and 48 recoveries. Imagine the true infection number in Hubei right now based on those numbers. It must be easily 300K+. Also, on a brighter note, young healthy people seem to be quite unfazed by this virus for the large part.

A few days ago that was said, then people started turning up at airports without a Visa with parents after the travel ban

Which airports? In China - hoping to then get to Australia?

The temporary ban on travellers entering Australia from mainland China led to some families being split at Sydney Airport on Sunday.

The 40-year-old IT worker and Australian citizen arrived in Sydney from Shanghai on Saturday afternoon with his mother, wife and two young children, aged five and three.

The family of five had been assured in Hong Kong that Mr You’s mother, who is aged in her 70s and hails from China’s Jiangsu province, would be allowed to enter Australia – but she was separated from the family on arrival in Sydney and told she would not be able to stay.

The ban does not extend to Australian citizens, permanent residents and members of their immediate family. However, as Mr You discovered, the definition of “immediate family” did not include his mother.

“We only have two options right now; I either buy a ticket right now, today, [for my mother] to fly back to China or … her visa will be cancelled and she will go into another detention centre and be sent back to China,” he said on Sunday afternoon.

It was a similar situation for Sydneysider Di Zhao, 43, whose 70-year-old father was due to arrive in Sydney from Shanghai on Sunday morning.

“I just keep waiting at the airport,” she said. “I’m very helpless. The only person I worry about is my Dad. He can’t speak English.”

Some 2,239 Indians have returned to Kerala from Wuhan, of whom 2,155 have been quarantined at home and 84 admitted to isolation wards in hospitals.

China is now threatening those ‘spreading rumors’ about the virus with the death penalty.
http://www.bjnews.com.cn/news/2020/02/03/683860.html
“To crack down on virus-related “crimes”, the People’s Supreme Court in Heilongjang province issued a notice to warn the public that spreading rumors about the virus could receive death penalty on the grounds of “endangering public security”, and those found guilty of making “subversive” or exaggerated comments could receive 15 years.

Bloody hell. Its obvious what “immediate” family is. Really chancing their arm there…

k down on virus-related “crimes”, the People’s Supreme Court in Heilongjang province issued a notice to warn the public that spreading rumors about the virus could receive death penalty on the grounds of “endangering public security”, and those found guilty of making “subversive” or

guess the rumours have not gone viral yet?
Maybe they should concentrate on providing better info.
Apparently there was a doctor warning of a SARS like illness in late December,/JAn guess what happened to him - he was arrested

Dr. Francis Boyle discusses the coronavirus outbreak in Wuhan, China and the Biosafety Level 4 laboratory (BSL-4) from which he believes the infectious disease escaped. He believes the virus is potentially lethal and an offensive biological warfare weapon or dual-use biowarfare weapons agent genetically modified with gain of function properties, which is why the Chinese government originally tried to cover it up and is now taking drastic measures to contain it. The Wuhan BSL-4 lab is also a specially designated World Health Organization (WHO) research lab and Dr. Boyle contends that the WHO knows full well what is occurring.

Zhejiang 829 cases. 0 Deaths. 60 recoveries.
Hopefully this gives a better indication of potential death/critical rates as medical services were not overwhelmed in Zhejiang when they started testing and treating patients.
We also have numbers from outside mainland China which are much more favourable currently than Hubei’s death/critical rate. 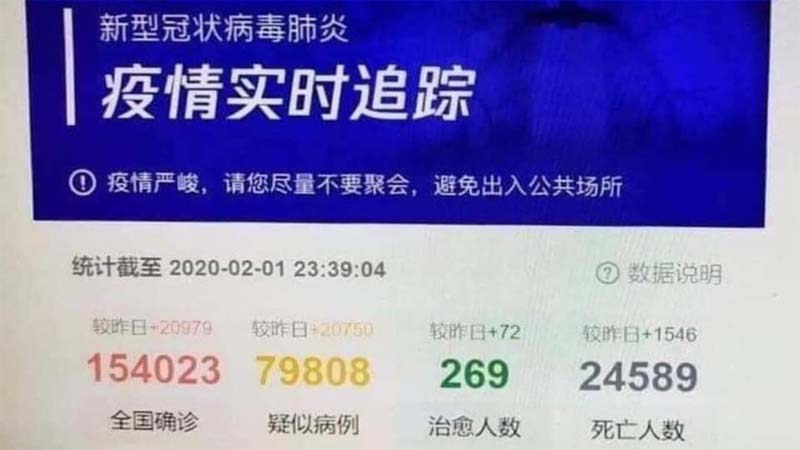 Translation: [NTD Beijing, February 04, 2020] Since the outbreak of pneumonia in Wuhan, Tencent.com’s current affairs tracking data page has been accused of multiple abnormalities. The number of confirmed diagnoses exceeded 10 times the official data, and the number of deaths even showed close to 25,000. Some netizens speculated that someone might risk revealing the truth.

A screenshot was posted on the Internet a few days ago, showing that the data displayed on Tencent’s “Tracking of Epidemic Situation and Current Situation” webpage appeared abnormal again when it was close to midnight on February 1st, Beijing time. Among them, the number of confirmed diagnoses nationwide was 154,023, more than 10 times the official number; suspected cases were 79,808, which was nearly 4 times the official data; the number of cures was 269, which was far lower than the official number of more than 300.

What is particularly shocking is that on this page, the death toll was shown at 24,589, while officials only claimed that 300 people had died.

  Comparison chart of Tencent abnormal page (left) and normal page (right). (Web picture) So far, netizens have posted similar screenshots of Tencent displaying abnormal data at least three times. Some netizens questioned the authenticity of these screenshots. However, some netizens said that when Tencent updated its data, it suddenly flashed an oversized data, and then quickly returned to the official “official” news. Similar situations occurred many times, or it showed that someone was taking the risk to reveal the truth.

An eight-year-old boy from Wuhan, China is confirmed as Queensland's third case of the potentially deadly coronavirus.

The two Chinese citizens from Wuhan city that tested positive for the new coronavirus, currently hospitalized at the National Institute for Infectious Diseases, in the last hours have had an aggravation of clinical conditions due to respiratory failure, as in other similar cases reported so far.

Do you have a link to that information Blindjustice? Is that the 43 & 44 year old? That would really not be good if it was.