New Zealand’s High Court has ruled that the country’s first nine-day, Covid-19 lockdown from March 26 to April 3 was unlawful as it infringed on people’s rights and freedoms without a legal basis.

You’ve probably already seen the stunned reaction from all sectors affected by this latest madness - including sports and cultural organisations. But the strongest has come from the most important group - the business sector who are barely concealing their anger and frustration at the seemingly arbitrary nature of the restrictions.
“Show us the science,” appears to be the call. 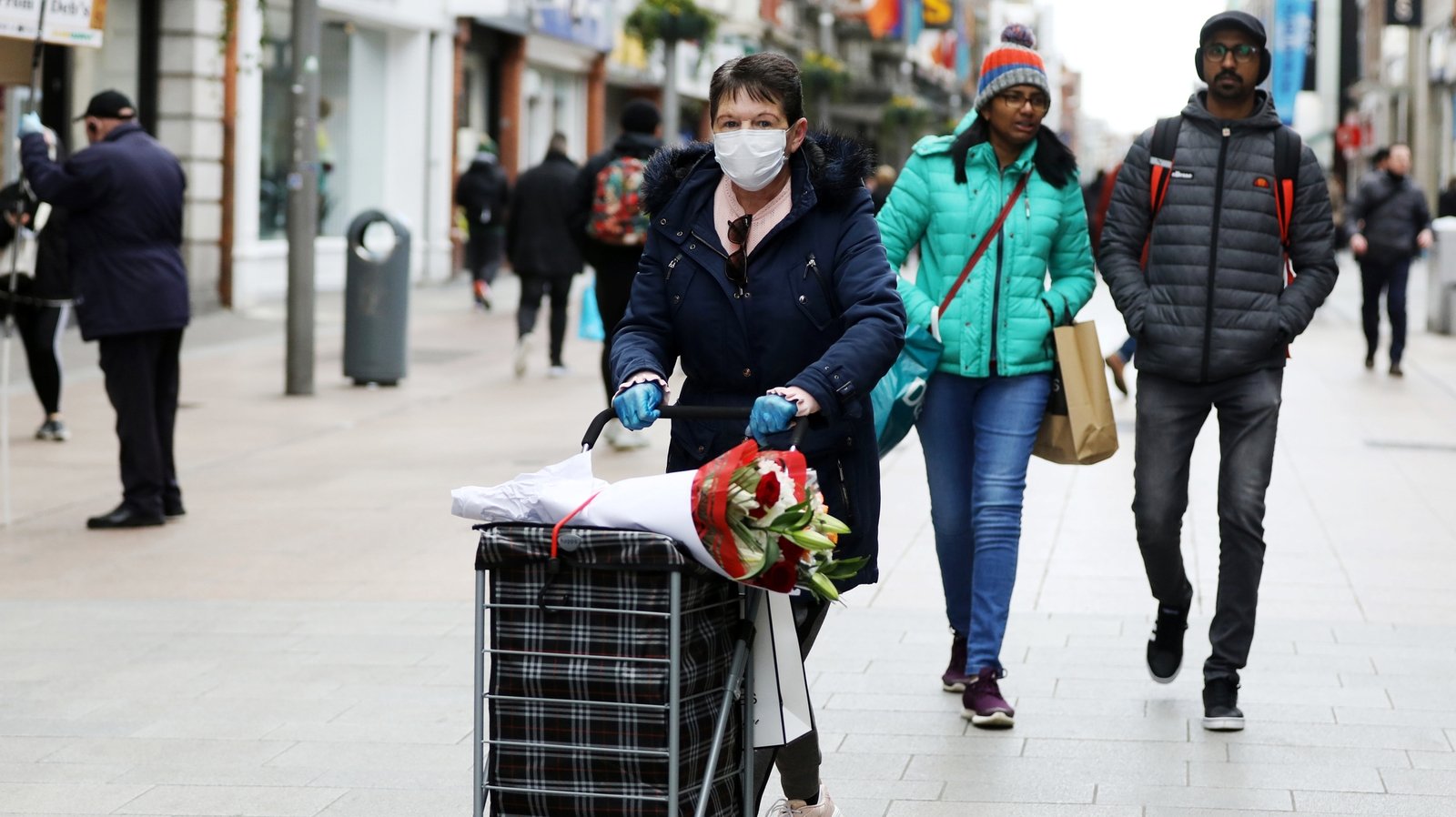 Calls are growing from within the business community for further clarity to be provided by the Government on its rationale for new Covid-19 mitigation measures.


It is seeking a full explanation and evidence as to why each new measure has been introduced, details of where virus clusters have appeared and confirmation about whether offices have been connected to any clusters.

It also wants to know whether any small restaurants or coffee shops have been connected to any clusters of the virus, as well as an explanation of the rationale behind the differing capacity limits between the various types of setting.

Clarity is also being sought on whether public transport has been connected to any clusters of the virus.

"Without absolute clarity and transparency around the causes of clusters and known risk factors, it is inconceivable that whole sections of the economy would be locked down," said Ms Burke.

“Without this information, blanket measures are completely unfair on the many businesses who have spent huge amounts of time and money on ensuring they are compliant with regulations and providing a safe working environment for employees.”

Michael O’Leary tearing strips off of Mary Wilson on Drivetime yesterday: “Why are you defending NPHET…” basically called her out.

Michael O’Leary tearing strips off of Mary Wilson on Drivetime yesterday: “Why are you defending NPHET…” basically called her out.

If you look at who is in NPHET you will find that not one single member has any relevant experience in epidemiology, any relevant area of virology, or even anyone who might be familiar in any meaningful way with the scientific literature regarding epidemic / pandemic respiratory illnesses or coronaviruses. Look at their CV’s and published research.

What you do find is a large number of medical and government bureaucrats, a large collection of consultants and GP’s, and two people whose scientific research background seems to be mostly as part of the HIV research industry. Totally irrelevant to human coronaviruses. In fact if you are familiar with the backstory to the Pasture Inst/Gallo/HTLV4/HIV Scandal you would know why they are worse than useless.

That’s why Irish government policy has been a science free zone for that last six months. No one involved seems to have even a basic familiarity with the relevant domain knowledge. Just stuff they seem to have cribbed from WHO press releases. You will find more actual relevant science on a single page of the Norwegian Institute of Public Health…

Anyone who suspects that they have COVID-19 should have the opportunity to be tested.

… than in all the verbiage published by the HSE and gov.ie over the months

Actually the fhi.no site has probably the most relevant and well explained information available in the English language for general consumption. Which is a damning indictment in its own way of the CDC / hhs.gov and the NHS / doh.gov.uk let alone the HSE.

What could have been a reasoned debate on herd immunity and ‘living with’ covid PrimeTime last night, except they had one of the ‘Zero Covid’ crew in studio, Cillian De Gascun. They did have a piece about the lack of deaths across Europe during the recent resurgence.

He had the neck to defend New Zealands approach as valid saying someone deliberately broke quarantine - as if that wouldn’t happen here, and said Swedens economy suffered just as much as anyone else, this is demonstrably untrue, so basically lying. Nothing short of Vladimir Putin annexing the republic is going to threaten his salary and pension, so why would he give a damn about the Irish economy.

This is Utter Madness.

Zero covid would never work unless the full agreement with northern ireland. This particular reality is completely lost on most of the so called experts. Anyways, i thought i would look at the GDP. Caveats abound but the EU had a mare .
Worst still was the UK and wee know there approach to Covid.

I think a big drawback of the zero-covid strategy is that you don’t develop the behaviours that suppress the virus so that when the inevitable breach occurs it can spread quickly. I think realistically it will be whack-a-mole until the combined effect of better treatments/vaccines/mutations/post infection immunity diminish the impact. In the meantime we should push the envelope of opening as much as is sensible.

I wonder if Michael O’Leary will show this to the judge as exhibit A: 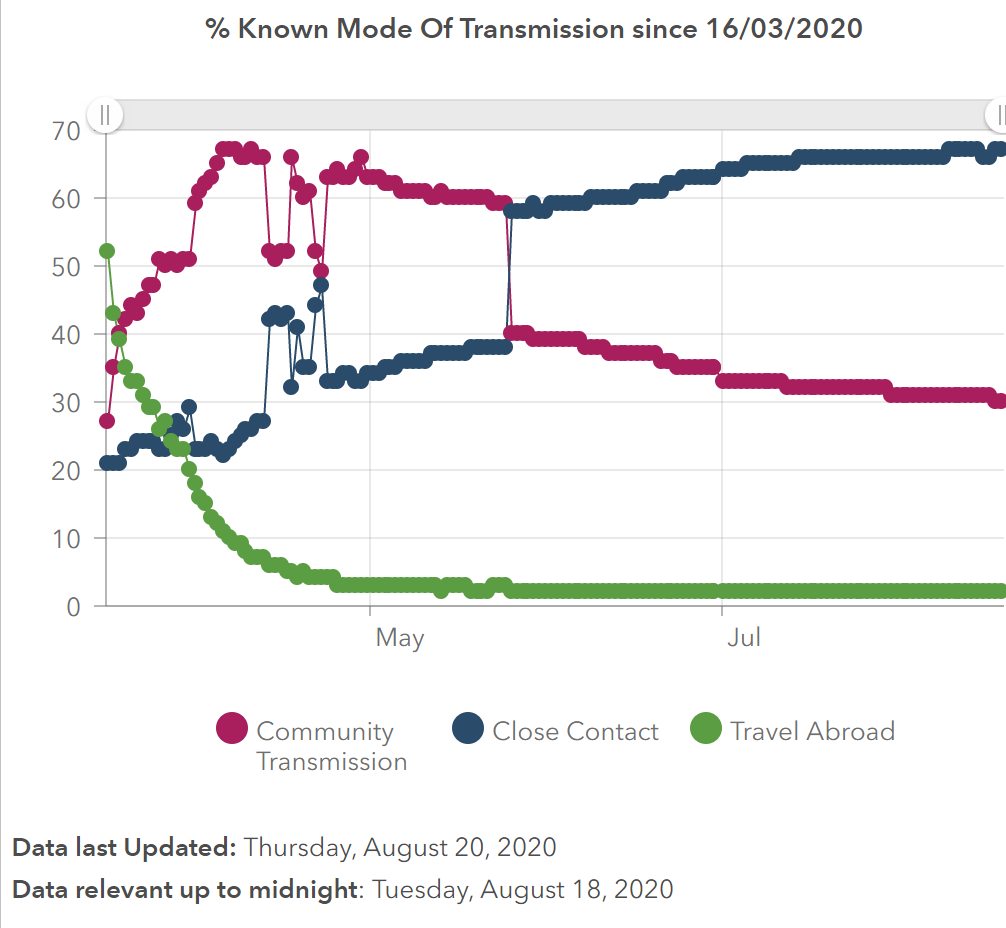 Melbourne under medical tyranny and Marshall Law. “The Lucky Country” 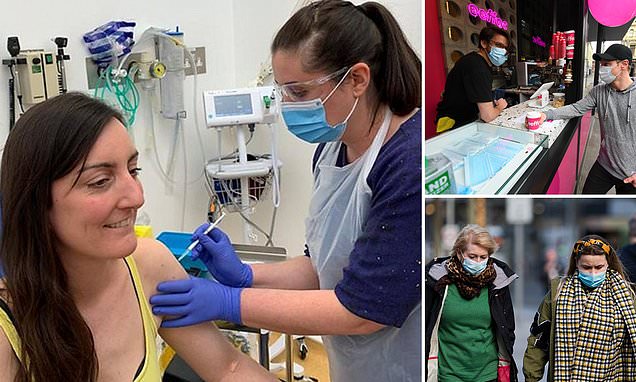 Scott Morrison announced the government had signed a memorandum of understanding with AstraZeneca Australia to secure the promising Oxford University vaccine candidate. 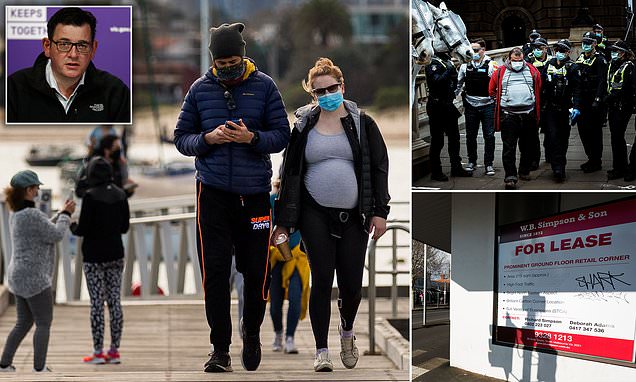 Free market think-tank The Institute of Public Affairs has called the city's stage-four restrictions 'the greatest incursion into our basic liberties ever on Australian soil'.

Doesn’t make any sense - if it ever did… 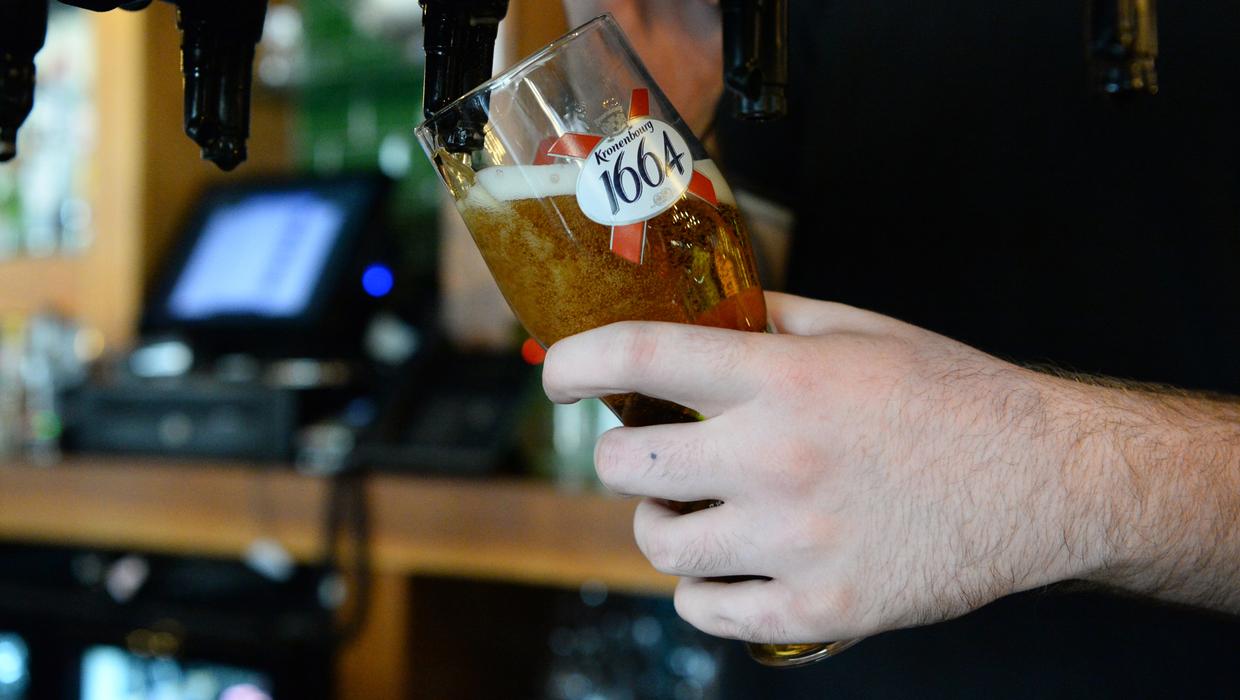 Senan Molony: Yes, our infection rate is half that of Belgium - but restrictions...

Ireland has some of Europe's toughest internal restrictions - despite being in the lower mid-table for incidence of Covid-19 over the past fortnight.

The current rate of infection in Belgium is twice that of Ireland. However, gatherings of 100 people inside and 200 people outside are permitted there, while pubs and restaurants can stay open until 1am.

This contrasts with a complete ban on sporting crowds in Ireland, a maximum of 50 spaced individuals at an indoor venue, with 15 allowed to meet outside and six at home. Ireland’s recent infection rate is 17th out of 31 European countries.

I’d expect to see a significant rise in cases in the coming six weeks. After the shenanigans in Clifden a lot of people just won’t give a toss anymore. So, just in time for schools to reopen and the economy to take an even deeper dive. This government should be s******* themselves right now.

In Sweden its still a limit of 50. Other Nordic country have higher limits. Within reason sports events could easily accommodate much larger numbers. I see the logic in relation to indoor events.

South Korea has another spike thanks to another church

Officials believe church gatherings in the greater Seoul region are largely responsible for a sudden increase in COVID-19 infections. South Korea had been praised for its control of the virus.

Well its two weeks till school start in Poland and we have record number 903 cases and local red/yellow zones with extra restrictions. Based on new recent cases. Actually they’ve added pinks today… counties in danger to become yellow:
https://pbs.twimg.com/media/Ef3YbGEWAAMIQaX?format=jpg

I was on holidays on polish baltic coast, first time in many years… crowds everywhere.

Great crowd down at the Customs House on a wet day

That is quite a turnout…despite the best efforts of the Irish Times & Co to whip up some kind of “far-right” fear and loathing. Most of those in the crowd look oddly normal, average, everyday people. That said - it’s hard to figure out what the protest is about - but the photo in the Irish Times with riot squad cops ready to confront this imaginary “threat” was unnecessarily provocative.

Not a golf bag in sight, fancy that US FDA-approved ointment found to treat, kill viral infections including...

Scientists associated with the project said the FDA-registered non-prescription over the counter (OTC) ointment has been proven to prevent, treat and kill viral infections including coronavirus.Get latest Healthcare online at cnbctv18.com 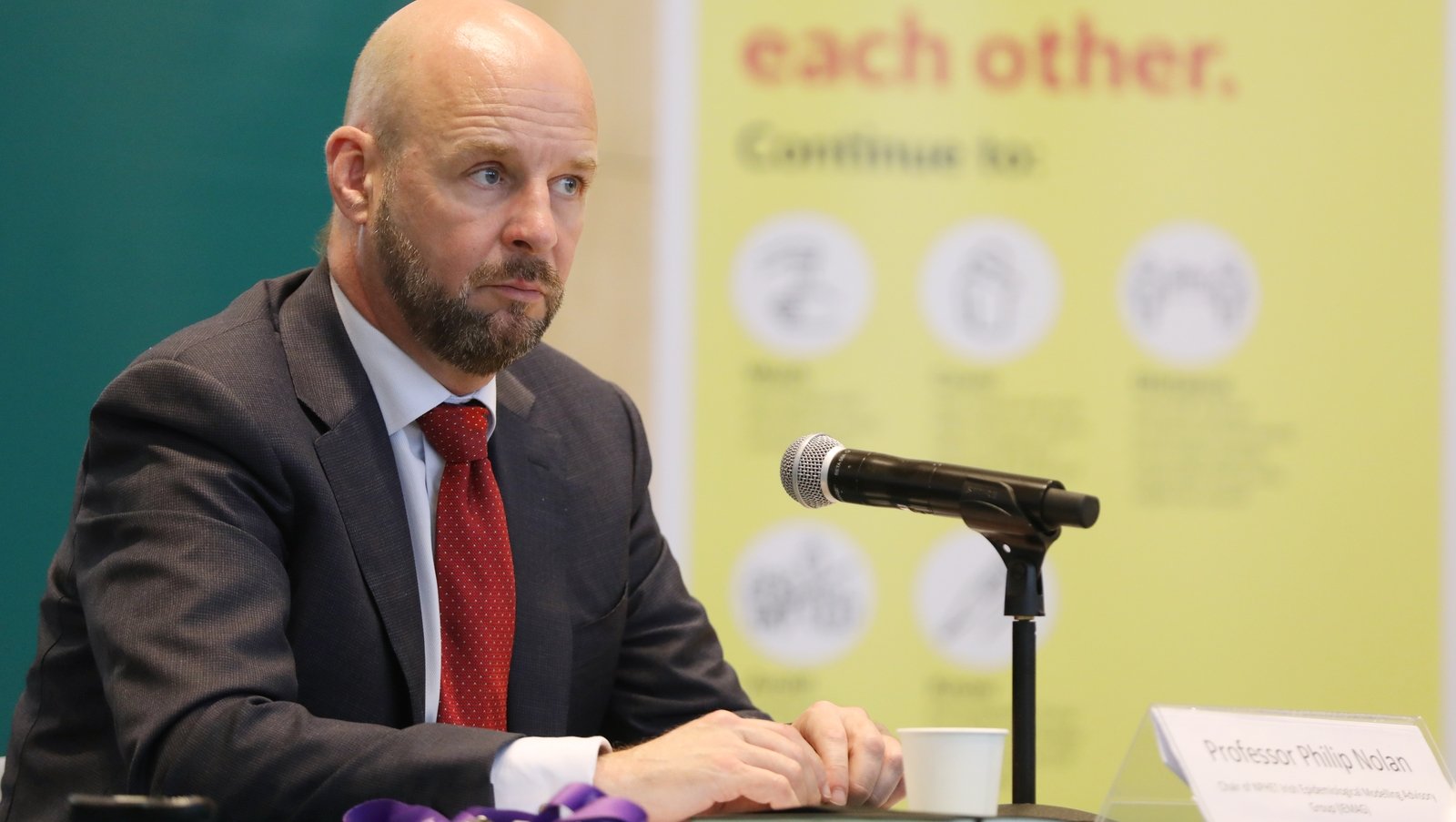 The Chair of the NPHET Epidemiological Modelling Advisory Group has said that 100 children, aged between five and 14, have tested positive for Covid-19 in Ireland in the last two weeks.

As anticipated and expected Halloween has come early too RTE.

Coronavirus: Dublin school to close for two weeks as student has Covid-19

Closure ordered after student identified as first case in Republic