The four adults and a child are not in a serious condition, the French health minister says.

Not good, possibly traced to Singapore! I.e already spread far and wide. Airports 24 hrs a day air conditioned and planes would be ideal places to spread it

I can’t see everyone shutting off flights to Singapore.

Edit: Wow, just noticed that guy that transmitted it to the others, had arrived at the ski resort on January 24. He must have picked it up in Singapore a few days before that.
336 Confirmed cases now outside of China. If that date is anything to go by that will increase dramatically over the next few days.

How many countries thus far?

TBH it looks like by the time the Chinese reacted it was already too late. 3% to 5% means that we’ll all know someone who will die from this maybe multiple people.

It was never going to be any other way. It has already been seen in advance. This is how it goes. So in a sense it is not too late. There is no too late. There is always something worthwhile that can be done, no matter how futile it might seem as long as it’s not panic. Remember, we already know people who have died, maybe many people who have died in our lifetimes albeit on a more natural ebb and flow of the passage of time, but that’s maybe a matter of our own lucky but temporal position and who is to say this would be a constant in anyone life? We can not change this basic truth.

Therefore there is no use in panicking.

Nor do I mean or intend to sound ominous, vague or patronising because I’m trying to give some perspective and the numbers people will do this and also because I am hugely optimistic about the future for lots of reasons, one being I am optimistic for a future not lead by fear - but there is no way I think this could have been avoided exactly.

Since I believe the cyclical nature of reality has a lot more to do with this than any human intervention we might make, let alone even try challenge the force of nature of an order of magnitude beyond past experiences or daily scope and to stop it dead, no way, don’t waste your time because you will need it for constructive critical interventions, which are of course very necessary and can be very real, and will be needed plus really cool heads, thus humanity can mitigate the effects but you cannot necessarily build a wall to stop a tsunami, but you can build an early warning system, to maximise the numbers of life saved and the numbers of souls lost to an absolute minimum which is the better more achievable focusing of resources which are finite and under threat.

I think it’s in 27 countries outside of mainland China now if you include Taiwan, Macau and Hong Kong. I think it’s in a lot more countries also (Indonesia and African countries have announced no cases yet, which is just not possible in my book). I know someone who had the flu last week in Singapore and they went to the doctor and he told them it wasn’t Coronavirus and didn’t test them. They are young enough and it didn’t affect them too badly and they are totally fine now.

Remember, the critical rate for this is 3% of people infected. Many people don’t get infected (look at the cruise ship, it seems the majority were uninfected). It actually seems to be having a milder effect on Europeans and on younger people so far. Many of the early deaths were people that were already in hospital for another illness and they unluckily got this on top of it. When it goes abroad, they will isolate people much quicker and not allow this to happen. Zhejiang province has over 1000 cases now and nearly 20% of people recovered with no deaths. They were some of the first to use the HIV drugs on people and those drugs appear to work well. They are not expensive drugs.

I’d say people will start to panic in the rest of the world now though as people realise it might affect them. I think this will definitely affect the stock markets and the current irrationality will turn a different direction. It won’t be anywhere as bad as people think though and they’ll get over the panic in a couple of weeks. The funny thing is, this was all inevitable from the moment it was announced. Kind of amazing that people looked on China as if it was on a different planet.

Wow he deserves the Order of Mao or something.

My main takeaway was that 40 of the 138 seriously ill patients were the hospitals own staff. That’s shocking.

My wife went to university in Wuhan and still has many friends there and they have a Wechat (Chinese version of Whatsapp) group where they chat.

One of her friends mother was tested positive but in order to be admitted to hospital you also have to signs of a chest infection in a scan. She didnt, so wasnt admitted despite testing positve! She died at home as no hospital would take her and now her husband has the same symptoms. Worse still they are are not allowed to bury the body or bring it to the cremitorium. As she wasnt admitted to a hospital its not a virus death offically even though she tested positive!

Horrendous doesnt begin to describe the situation there. Wuhan is on lockdown for at least another two months apprently with rumours doing the rounds that may be extended to six. By all accounts it’s utter hell on earth there right now. 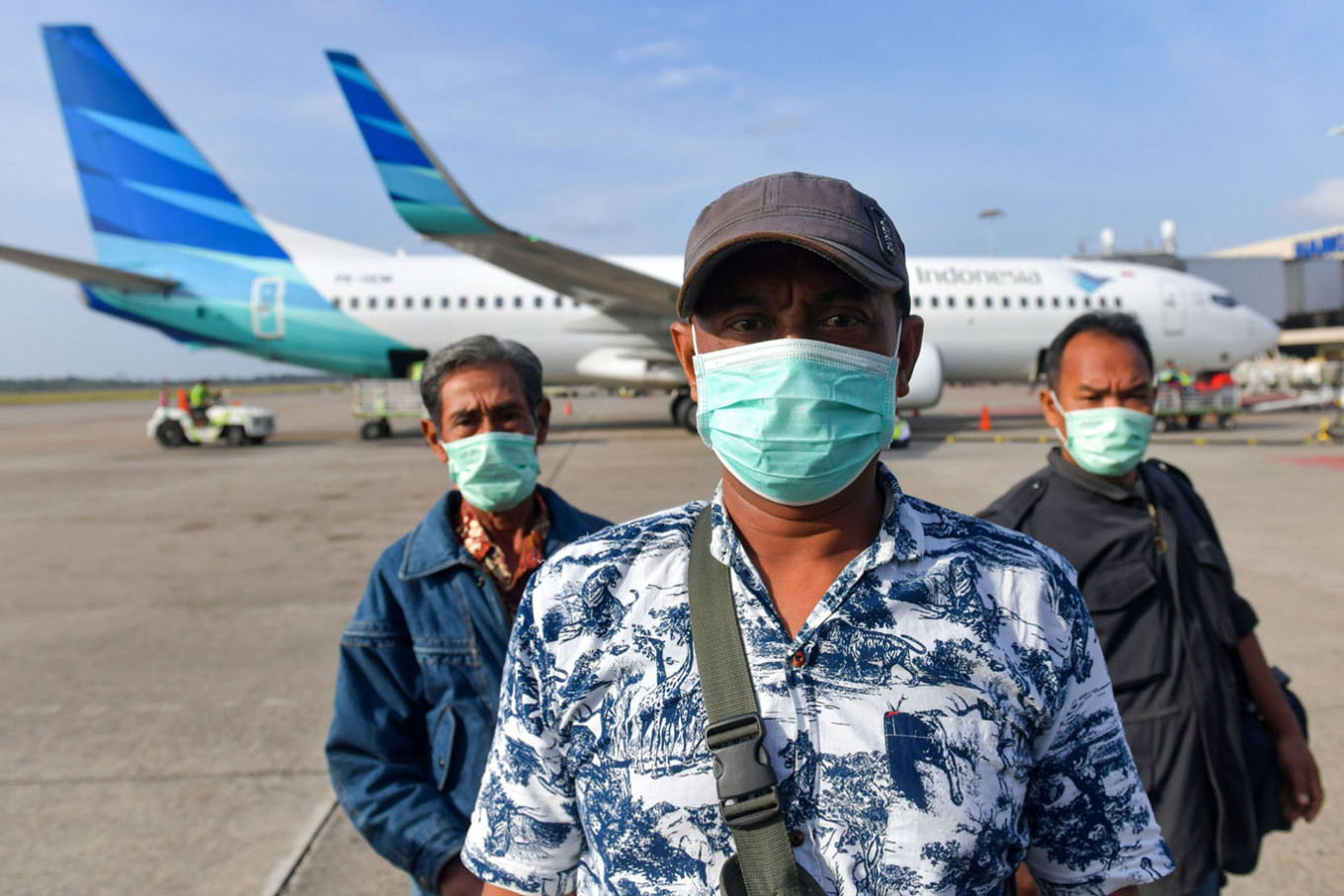 While acknowledging that there was still much to be learned about the new strain of the virus, R. Wasito, a veterinary professor at Gadjah Mada University who had previously studied coronaviruses, said the novel virus might not last long in Indonesia...

If you compare this…

Google Data Studio turns your data into informative dashboards and reports that are easy to read, easy to share, and fully customizable.

The US started doing this two weeks ago and I know that the screening lines for passengers from China involved waits of up to six hours at SFO last week. Everyone entering who visited China is being tracked. The EU on the other hand, is talking about it. So expect a decision maybe in a few months time.

8 of the 565 Japanese nationals repatriated from Wuhan had the coronavirus but 4 had no symptoms at all.

Will novel virus go pandemic or be contained?

The repatriation of 565 Japanese citizens from Wuhan, China, in late January offered scientists an unexpected opportunity to learn a bit more about the novel coronavirus (2019-nCoV) raging in that city. To avoid domestic spread of the virus, Japanese...

A young member of my wife’s family went to a rave in Holland yesterday. When he arrived at the Dutch Airport he was conspicuous by the fact that he wasn’t wearing a surgical mask. I don’t think it was the same in Dublin airport.

Thank for the update. It’s difficult from here to make sense of what is happening in Wuhan.

7 new cases in Singapore bringing the official total to 40. I suspect there are already hundreds of cases in Singapore. The British guy who infected 5 people in the Chalet in France picked it up there around January 22.

Among the new cases are a taxi driver and a private-hire car driver. There is a possible new cluster comprising five cases, linked to The Life Church and Missions Singapore in Paya Lebar.. Read more at straitstimes.com.

endemic human coronaviruses (HCoV) can persist on inanimate surfaces like metal, glass or plastic for up to 9 days, but can be efficiently inactivated by surface disinfection procedures with 62-71% ethanol, 0.5% hydrogen peroxide or 0.1% sodium hypochlorite within 1 minute. Other biocidal agents such as 0.05-0.2% benzalkonium chloride or 0.02% chlorhexidine digluconate are less effective

Persistence of coronaviruses on inanimate surfaces and its inactivation with...

Diarrhea may be a secondary path of transmission for the novel coronavirus, scientists said Friday following the publication of the latest study reporting patients with abdominal symptoms and loose stool.

Diarrhea may be a secondary path of transmission for the novel coronavirus, scientists said Friday following the publication of the latest study reporting patients with abdominal symptoms and loose stool.

The possibility is not totally surprising to scientists, given that the new virus belongs to the same family as SARS.

Fecal transmission of SARS was implicated in sickening hundreds in Hong Kong’s Amoy Gardens housing estate in 2003. A rising plume of warm air originating in bathrooms contaminated several apartments and was transported by wind to adjacent buildings in the complex.

The business event at the Grand Hyatt Singapore that has been linked to at least five coronavirus cases in three countries was hosted by a global gas analysis company with offices in Europe and Asia.

Singapore’s Ministry of Health had previously said that 109 company employees - 94 from overseas and 15 local - attended the conference.

Of these seven cases, five of them are linked to previously announced ones.

This is interesting, it’s about flu transmission in tropical places, air travel spreading it. It’s about Australia mostly, when flu increases in Sydney and Melbourne it increases in Darwin despite the tropical weather. Places like Singapore have double spikes annually. It’s got an equatorial climate and rains all year really but (without looking at the date) equatorial places have the ITCZ (Inter tropical convergence zone) cross twice a year bringing higher rainfall when it does. Tropical places get higher flu rates during the rainy season.

This is believed to be because humidity affects droplet sizes and thus transmission. This info is directly transferable to coronavirus.

Do people living in the tropics get fewer cold and flu viruses?

Cold and flu viruses are generally seen as winter diseases — so does that mean that in the hot tropics people get fewer cases?