No flu, did it flu away this year?

Snap in our gaff and related gaffs from chrimbo day until week 1 January. About 20 extended family one by one, one day 2 days 3 days for some. Better.

Not dead. Not deadly for most.

Nice. I see what you did there.

Adjust the denominator to win your argument by adding countries that test less than the world’s largest economy.

So if the numbers are comparable, as was the original assertion, then let’s see the figures. I provided some, and you’re providing nothing but rhetoric. Zero information thought.

Snap in our gaff and related gaffs from chrimbo day until week 1 January. About 20 extended family one by one, one day 2 days 3 days for some. Better.

Not dead. Not deadly for most.

Probably because they just had colds.

Anybody get a covid test? I recall there being at least 2 doses going round in December (I had a bad cold myself). For sure I’m not enough of a snowflake to assume I actually had covid though. Is this a replacement for declaring the sniffles to be man flu?

Almost 6,000 did not turn up for Covid tests in the mid-west

Nearly 6,000 people have failed to attend their scheduled Covid-19 test at pop-up testing facilities in the mid-west region.

No no tests. You see these 6k Peep that didn’t show? Guarantee you none of them have covid either. Cant you see?

Probably because they just had colds.

For which my friends was put on oxygen immediately in the GP’s surgery? Silent hypoxia is not a cold symptom but it is a covid symptom.

Three reasons why COVID-19 can cause silent hypoxia

To crack the mystery of what causes silent hypoxia, a condition when oxygen levels in the body are abnormally low, BU biomedical engineers used computer modeling to test out three different scenarios that help explain how and why the lungs stop...

To re-cap, there is a stark difference between the black propaganda of the respitory-chinaman-fall-down-dead-on-whatsapp versus what looks like a rather humdrum list of symptoms that make it look elk make it look like any strain of “flu”:

People with COVID-19 have had a wide range of symptoms reported – ranging from mild symptoms to severe illness. Symptoms may appear 2-14 days after exposure to the virus. People with these symptoms may have COVID-19:

This list does not include all possible symptoms. CDC will continue to update this list as we learn more about COVID-19.

When to seek emergency medical attention

Look for emergency warning signs* for COVID-19. If someone is showing any of these signs, seek emergency medical care immediately:

*This list is not all possible symptoms. Please call your medical provider for any other symptoms that are severe or concerning to you.

COVID-19 has a wide range of symptoms. The Self-Checker is a guide to help make decisions on when to seek testing and appropriate medical care.

Interesting to compare Ireland with Wales. They had a strict two-week “firebreak” that ended earlier this month. Apart from slowing the rise in cases it didn’t do a huge amount and they have a much higher level of cases and “deaths” at the moment. And that’s with a population a good deal smaller than ours (just over 3 million). Anyway, they’ve opened the bars, restaurants, shops etc and not much has changed. Unrestricted travel right across Wales too - which wasn’t even allowed under our Level 3,

Covid: What can you do as Wales' firebreak lockdown ends?

New Covid-19 rules have come into force after an end to Wales' second national lockdown.

I think we should be wary of crowing about mainland UK. It might be as simple as they have more older, fat black and asians with heart disease and pre diabetes. And more of history of MRSA type problems in healthcare setting.

Give us 20 years. We can beat them on both handsomely

Pretty hilarious when you think about it…how many times have these presenters and their employer pointed the finger at Covid wrongdoers? Yet they host an indoor leaving “do” for a departing colleague. I’m sure some of the Golfgate accused can’t wait to get in front of some of them (“Well, as you know only too well yourself Bryan/Miriam/Dave - we all make mistakes” etc.)

Covid 19 doesn’t cause “silent hypoxia”. Wearing a nappy on your face 24/7 does though.

This guy has been gaining traction online following an interview he gave in Canada.

Interview has since been deleted by youtube for breaching their t and cs.

Hodkinson is the CEO of Western Medical Assessments, and has been the company’s medical director for over 20 years. He received his general medical degrees from Cambridge University in the U.K., and then became a Royal College certified pathologist in Canada (FRCPC) following a residency in Vancouver.

He also taught at the University of Alberta and runs MutantDx, a molecular diagnostics company in North Carolina.

“What I am going to say is lay language and blunt,” Hodkinson said during an Edmonton City Council Community and Public Services Committee meeting, audio of which is currently making the rounds on YouTube.

“There is utterly unfounded public hysteria driven by the media and politicians. It’s outrageous. This is the greatest hoax every perpetrated on an unsuspecting public.

“There is absolutely nothing to be done to contain this virus other than protecting your more vulnerable people. It should be thought of as nothing more than a bad flu season.

“This is not Ebola. It’s not SARS. It’s politics playing medicine. And that’s a very dangerous game.”

“Masks are utterly useless. There is no evidence based on their effectiveness whatsoever. Seeing these people walking around like lemmings obeying without any knowledge…putting the masks on.”

Hodkinson said social distancing is also “useless” because the virus can travel up to 30 m before landing.

He said positive tests, which do not accurately reflect whether you have the virus, are driving “public hysteria,” adding testing should stop unless you show up at a hospital with respiratory problems.

Dr. Roger Hodkinson says the virus is no worse than a

Here’s a link to the video. 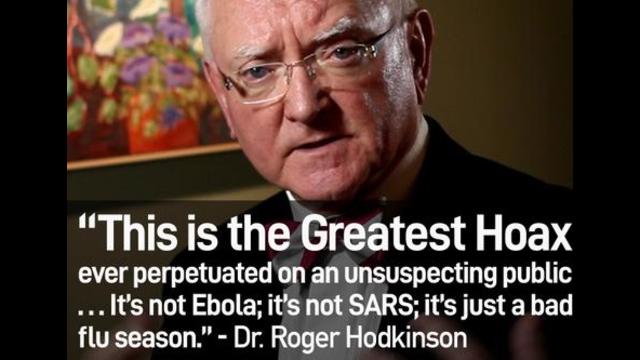 DR ROGER HODKINSON: THE GREATEST HOAX EVER PERPETRATED ON AN UNSUSPECTING PUBLIC

From Cambridge University-trained medical specialist in pathology/virology, Dr. Roger Hodkinson: "THIS IS THE GREATEST HOAX EVER PERPETRATED ON AN UNSUSPECTING PUBLIC. The bottom line is simply this: there is utterly unfounded public hysteria dri…

Can you stop talking through your hole please?

Can you stop talking through your hole please?

So I guess you agree face nappy is an accurate observation of the reality!

Ya need to keep up, it was already posted 2 days ago in this thread by moi!