Yea RSV was becoming a thing in eh US early summer, I had a post about ti but never complete it.

Who ever heard of RSV?

First instincts was shedding’/transmission being around their fully injected parents and possibly grandparents. Such could be at play in Ireland en mass, in the giant petri dish of woe, so in a sense, they’ve as much admitted that the UK is shedding us!

Next they’ll be telling the people whom are fully injected that they need to catch the coivds to improve their immunity… oh wait! 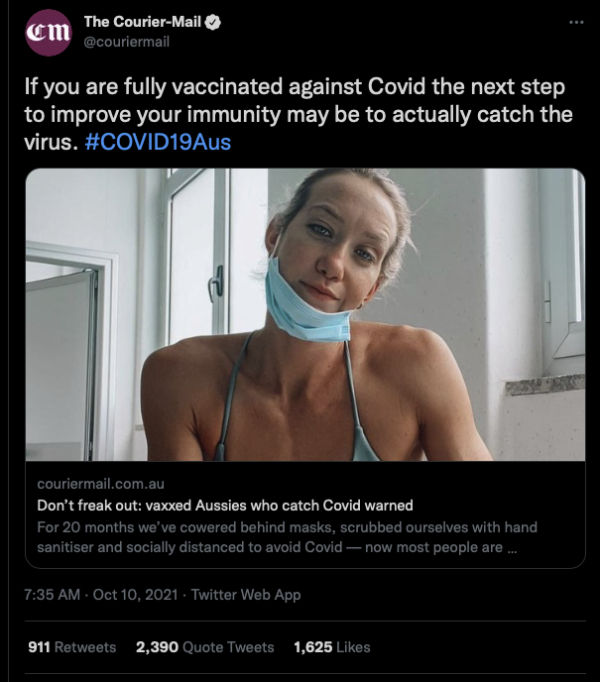 RSV is one of the most common respiratory infections. If you get cold/flu symptoms its usually either a rhinovirus, influenza, human corona virus (whichever two are currently doing the rounds locally), or RSV.

As the usual general infection rate for all four is a few percent of the population at any given time, usually mild, and all four infections have pretty much the same symptoms you can see just how stupid the SARs 2 mass hysteria is. Unless you have intense pain in the nasal membranes (rhino-sinusitis) all other “COVID” symptoms are completely non specific. In fact without the nasal pain (which can happen with other respiratory infections too) you will have just a bog standard infection of one of the four common virus types, not a SARs 2 infection, 95% plus of the time.

In case anyone was wondering as of last week more than 2/3’rd of all deaths associated with vaccination in the last 30 plus years in the US have been in the last year. Since December 2020. As recorded by VAERS. So maybe 10% of actual number. Which would make it well over 100K.

With the exception of certain pulmonary disease deaths from all causes associated directly or indirectly with viral pneumonia and other serious respiratory illnesses for 2020 / 21 are within the 10 years range. Nothing out of the ordinary. So from a purely epidemiological point of view there is no physical evidence from the annual mortality statistics showing that there was any actual pandemic / epidemic of anything in 2020/21. There seems to be little evidence of additional deaths. Just mostly substitute cause deaths and very wide-scale misclassification of clinical case types. In a true pandemic there is a large ramp up of additional deaths in conjunction with normal mortality rates.

So media driven mass hysteria and nothing else. According to the official mortality statistics in a whole bunch of countries. You cannot have a pandemic if there is no very large increase in morality rates. Thats how they work. A pandemic kills lots of extra people.

"The first goal was to get everyone vaccinated and that is still the prime focus if we want to reduce circulation and protect those for whatever reason the vaccine hasn’t fully protected them.

She said NIAC is also reviewing the evidence on the impact of infection on those aged under 12 and keeping that under constant review with regard to the vaccine roll-out.

"As always we are following the evidence. We know that immunity is quite long-lasting. "

The Department of Health has been notified of 1,914 confirmed cases of Covid-19.

… and also highly unlikely to catch two or more at once.

Coronavirus: How the common cold can boot out Covid - BBC News

The more common cold the better.

I’d like to see the studies showing no excess mortality. I’ve only seen the opposite like the below study. Their analysis of 100 countries shows clear excess mortality in all but a small minority of countries. They found South American nations like Peru, Ecuador, Bolivia and Mexico were the worst hit, with excess deaths rising to well above 50 per cent of expected annual mortality. 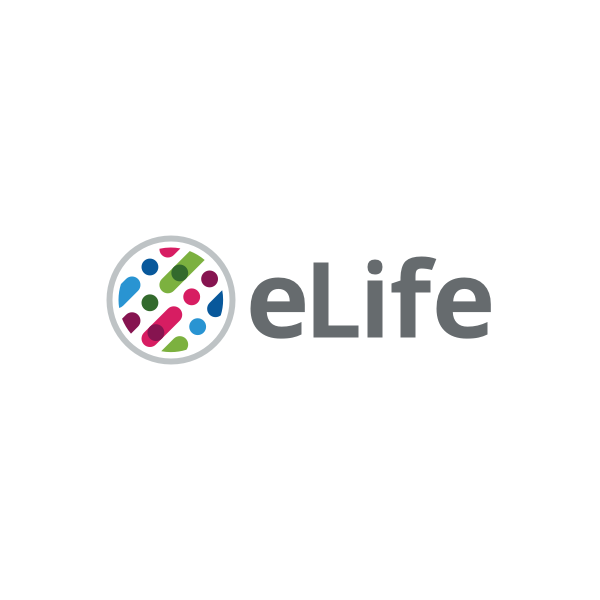 Tracking excess mortality across countries during the COVID-19 pandemic with the...

The World Mortality Dataset and paper is the largest dataset of all-cause mortality currently in existence for tracking mortality and excess mortality during the COVID-19 pandemic.

That paper you quoted is from an economist and some computational bio-informatics post grad who used very low grade data in a very naive way. For example most of the “cases” are based on either a non clinically valid test or based on purely arbitrary diagnosis criteria. Often by administrative staff.

They should have only used serious respiratory infection / pneumonia FROM numbers not the catch all used in those statistics. I know in the NY “COVID” mortality numbers is a bunch of people with multiple gun shot wounds. And the UK had a number of car accident fatalities who died WITH Covid. And in Belgium in a few provinces everyone who died for a few weeks in spring 20202 was a COVID death. Almost as bad in Lombardy for almost two months. The peak months.

And of course we had the rather unique situation in Ireland back at the beginning of the year where for a week or two almost half the people dying in the country died of “COVID”. Might have something to do with a total fuck up in the testing labs when for 10 days over Christmas the test positive rate went from < 5% to almost 20% and then once Christmas was over it went back to < 5%. Thats what happens when you use a basically fraudulent clinical test.

So its a junk paper because GIGO. Its low grade / white noise data used in a very simplistic way.

If nothing else the authors need to break open a book on epidemiological data analysis and learn how to do basic first pass normalization of the data sets. Playing around with some R scripts in Python wont cut it. Which is all they have seemed to have done,.

I was talking US and the CDC numbers in my post. To fit in with the VAERS info. If you start digging around here

and start adjusting the states which had total breakdowns at various stages (WA is a good control) the numbers start looking very different. NY, MA,and NJ numbers are very low quality up to two thirds of NYC “cases” during the first wave have zero validity. Just like in Italy, Spain and Belgium to name three countries nearer at hand.

I’ll see if I can find the master mortality numbers again from the CDC. I thought I bookmarked it. Some very interesting 10 year data in there. Once you start look at FROM rather than WITH the mortality numbers for COVID look pretty anemic. In fact the only number that really matters, pneumonia, did nor shift at all. Basically if in aint pneumonia or ARDS the death was not FROM SARs Cov 2.

After all, that was the clinical cause of death criteria used before March 2020 for SARs CoV 1 and MERS.

So that paper you quoted means nothing.

Well its basic immunology. If the immune system has been activated to fight an ongoing viral infection then guess what, any novel virus that crosses the barrier gets immediately whacked by a very paranoid immune system. One reason why a novel corona virus gets so little traction with kids is their immune system has either just been fighting off one of the general circulation HCOV or is already infected. If the average infection rate is up to 10% with a 2 week infection length the majority of kids will have had a recent HCOV infection in the last six month to a years. So something like SARS 2 will be asymptotic / mild if makes it deep enough into the upper respiratory system.

Most recent deaths were vaccinated.

Compare reports on deaths up until 11th September with the report up to 9th October: 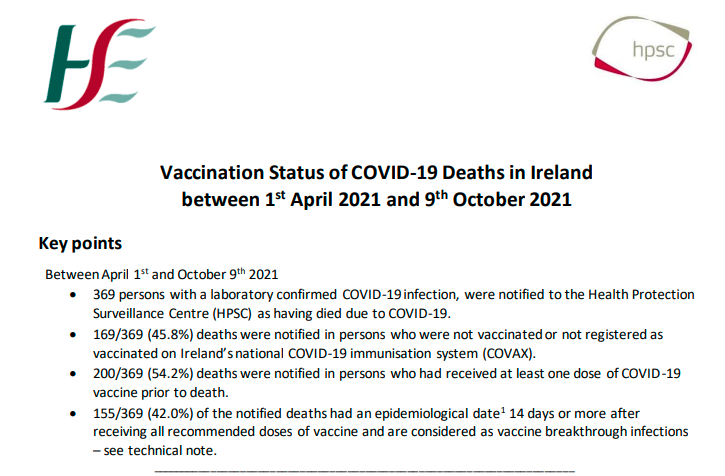 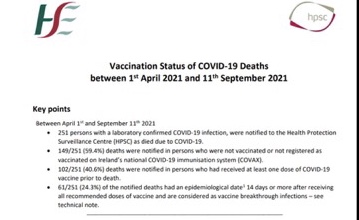 By all means double check because this means huge deliberate disinfo from everyone in the last 2 days - the September files are gone from the hpsc page (only October report there now), but it’s possible to get them on web.archive.org
https://www.hpsc.ie/a-z/respiratory/coronavirus/novelcoronavirus/surveillance/vaccinationstatusweeklyreports/

OK. Remember those articles that show that Irish people must among the richest people in the world because of the GDP / population number? Yet unlike every other country the GDP/GNP/GNI difference is almost 50% so actual household income is just below EU median. So all those articles nad papers are just bullshit. But the articles say Ireland is very rich…

How many times do I have to repeat it. They are GIGO research. Those “case” number statistics are based on a fundamentally different clinical criteria from what was used for the SARs CoV 1 outbreak in 2003. At least outside of China. And the criteria used for all other communicable diseases. Most of those “cases” were not actual active SARs CoV 2 cases. Up to 90% plus during some time periods in some cultures. The WITH case numbers are meaningless. Which is most of those numbers.

You could just as equally show that the majority of the COVID “cases” also died WITH say HSV. Which at least 60% did.

You will find papers published confirming what I have written here In five or tens years time. Probably. When the mass hysteria has run its course and done it damage. Although that is not guaranteed given the political stakes. Key parts of the post SARs 1 outbreak in 2003 follow up studies were never published due to the coverup and suppression by the Chinese government. The studies that would have established that the IFR was closer to < 0.2% than the WHO published number of 2%. Which was untrue.

Chart and table of the U.K. death rate from 1950 to 2021. United Nations projections are also included through the year 2100.

And finally put in the range 2010 to 2020. I see no big jump in 2020 like 1958 or 1968. Thats because there was no large increase in morality rates in 2020 that are normally associated with a traditional pandemics. In the context of yearly fluctuations in the previous ten years totally normal.

This pattern is being repeated in all western countries that had any kind of wide spread community outbreak of SARs CoV 2 in 2020. I’ve seen the numbers for about half a dozen so far. No surprises. At least in the US almost all increases in mortality in 2020 was due to increase pulmonary deaths due it looks like to dislocated medical treatments due to the lockdown. All causes respiratory infection mortality rates were normal. The death rates from cancers will start going up this year and will last for years. For the same reasons.

And youre not going to read many papers on this subject. At least in the short term. The fastest way of killing your next Research Grant application with the UKRI or equivalent down stream organization is to publish a paper discussing these very interesting epidemiological statistics for 2020/2021.

Because that is how that particular game works.

Lots of hard things are hard. Lots of things to swallow are similar .

Mask up. Get injected. Them things be easy.

That’s pretty clear to me. You don’t accept?

Estimates from the Economist.
I’m sure there’ll be excess deaths in 2021 - you haven’t seen the ONS excess death report recently as reported on in the Torygraph? 20% excess over 5 year average and something like “ill defined conditions”

Only for the lockdowns…

Israelis telling their conspiracy tales to the camera, that ones whom lived to tell the tale.

“Prof McConkey told RTÉ’s Today with Claire Byrne programme that a quarter of the country’s ICU beds are now being used to treat people with Covid-19 which he says “really disrupts the regular care” that can be provided to those who are very ill in Ireland.”

Reid says time for 'reset button' as 482 in hospital

There are now 482 Covid-19 patients in hospital, Health Service Executive CEO Paul Reid has said, an increase of 76 since Saturday.

Listen up. “When all restrictions are lifted it’s important that we have big restrictions”. Orwellian.

Mr Reid made his comments on Twitter just an hour after the Government chief scientific advisor Professor Mark Ferguson said those planning to attend nightclubs when all remaining restrictions are lifted must be vaccinated “for their own protection”.

Eh “reset button” is comms. Nolan used this before.