I seen someone mention that there are 4 ministers for health at the top table now.

Martin, Varadkar, Harris, Donnelly. That covers 10 of the last 20 years.

Which bit of the media is a full scale permanent propaganda asset of pure unadulterated evil is no one understanding?

… but hang on while I pretend ot be shocked for a moment:

Awwww it’s the jet plane analogy turn in the game… didn’t we have fun with that before! I’m off to have a look…

In the latest moves due to the injection ADE Adverse Reactions super-holocaust. The national broadcaster has suffered deep staff and funding shortages, one former head of programming now rolling on the floor believed they would not stop until they had a “Skeleton staff”, running the entire broadcast operation.

I seen someone mention that there are 4 ministers for health at the top table now.

Martin, Varadkar, Harris, Donnelly. That covers 10 of the last 20 years.

The Trend is the Enemy

The health care system came under under unseaonsal pressure during the summer.

The trend is into it’s 5th month, about to go into it’s 6th month.

The official “data are clear”.

No fucks given about the permanent 100% daily fatal plane crash that is the injection regime of crashing planes, a “no huge issues with safety” according to Christine Loscher, whom popped onto the scene back in July looking to stick needles in children and pump them full of synthetic mRNA and DNA, which destroys their young hearts leading to death.

Another TEDx’er whitecoat pimp pushin’ genetic injections for all the children, add to the watchlist of ISAG and such like operatives who terrorise the airwaves with their fearfully good news:

Professor Christine Loscher said there is a concern about the impact of long-Covid disease among this age group.

Speaking on the same programme, Prof Loscher said that both the Moderna and Pfizer vaccines have been approved for use in Europe, the US and the UK with very positive safety data.

She said that “no huge issues with safety” came to the fore with the mass worldwide rollout of Pfizer and Moderna vaccines. 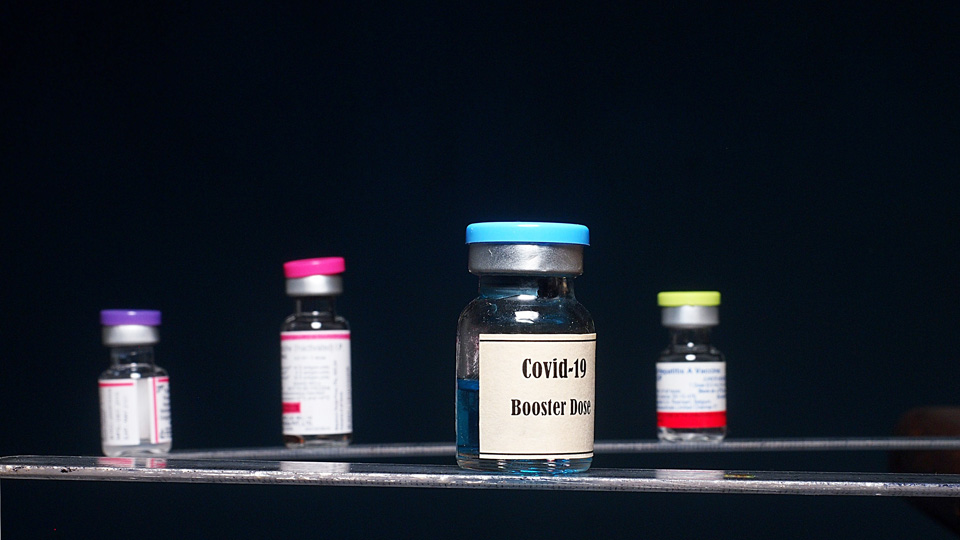 POLL: Will you take a Covid 19 booster shot, if and when one is offered to you?...

VOTE in our poll and leave your comments here and on social media.

Not far off the result in the original and greatest pin poll in the stellar Booster Beware thread, that clicked an incredible 12 voters so far, we had so many more options, we didn’t just presume you were already double hit - Pin polls, only the best polls. 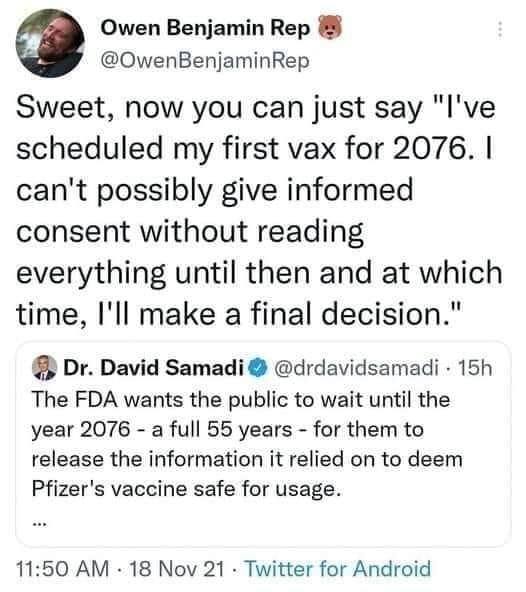 Seen elsewhere… I’ve no link or confirmation though. But SIV was a contaminant in old polio vaccine batches etc.

This was reported recently.
https://dailyexpose.uk/2021/10/31/100-percent-of-covid-19-vaccine-deaths-caused-by-just-5-percent-of-the-batches-produced/

Brilliant.
Sure, these were meant to be the conspiracy theories.
Who’s making decision which number is to be used?
If this is true the number of knowing participants will be well over a million mark in Europe alone.

Why are some getting no side effects and others are getting side effects such as death. After all the vaccinated are part of a medical trial and every medical trial ever conducted needs a placebo. All vaccines whether placebo or not contain nanotech…

Love all the comments about getting retested until it’s negative!
Sympathetic comments are few and far between.

A key piece of the puzzle. Tomas Pueyo

The Hammer and the Dance: A Retrospective

The mysteriously viral Medium essay that inspired lockdowns in multiple countries has not aged well.

The “science” had always been on the side of not locking down. This was a formidable problem for the early advocates of mass containment, and it is where Neil Ferguson and his Imperial College pandemic modelling team proved useful. They threw together a modelling study claiming that millions would die if Hubei-style lockdowns weren’t imposed, and Johnson’s government folded. In Germany, medical bureaucrats decided they wanted a lockdown too, but like many countries, we found ourselves in the awkward position of not having a native tradition of pandemic modelling to produce the made-to-order scientistic justifications. Nevertheless, our Interior Ministry threw together a team of medical bureaucrats and mid-level scientists to produce an anonymous pseudoscientific “strategy paper” that could be used behind the scenes to persuade politicians and journalists that lockdowns were the only way.

They had the name from “Coronavirus: The Hammer and the Dance”, a viral essay penned by Bay-Area thinkfluencer Tomas Pueyo and posted to Medium on 19 March. Within just days, this piece came to the attention of bureaucrats and politicians in multiple countries, ultimately guiding lockdown policies across the West.

Pueyo had just come to prominence nine days earlier, with another widely shared Medium essay entitled “Coronavirus: Why We Must Act Now.” This item merely rehashed the reasoning of the WHO report endorsing lockdowns in more simplified terms that a broad public would readily understand. “The Hammer and the Dance” was, in turn, a popularisation and mild adjustment of the Imperial College study. Models are country-specific, for they depend on the healthcare and economic resources available in their respective jurisdictions. Pueyo’s role was not only to simplify, but also to withdraw the Imperial College model from the context of the United Kingdom and transform it into a general political appeal that would speak to medical bureaucrats everywhere.

It’s unsurprising, looking back at Pueyo’s work today, to see that he was completely wrong about almost everything that matters. What is perhaps more bizarre, is the extent to which his zombie theses continue to dictate containment and also vaccination policy almost everywhere, despite their near-total falsification.
Take, for example, his belief that infection waves will continue to rise, either until they have infected every last susceptible person on earth, or until your government orders the virus to stop:

This is obviously untrue. Infections rise and fall according to overwhelmingly obvious seasonal and regional patterns. These effects are far more significant than any government policy, from lockdowns to universal vaccination, could ever hope to be. What is more, we are not all in contact with each other, and we live in overlapping social circles. When the virus finds a pocket of interconnected, susceptible people, a wave gathers strength, but soon the virus starts stepping on itself, as it bumps into more and more people who are already sick. Then the wave collapses and the virus is reduced to low levels of infection until it can find another seam of interconnected, susceptible people. This is how all viruses work, and it is why we have the ICU and hospital capacities that we do – because scenarios where every last person is infected over the course of a single month literally never happen, they are impossible

More about Patient Zero for the Totalitarianism infection - Tomas Pueyo

Here is the mathematics of a Casedemic. Why most tests are false positives so the more test you do the more “cases” you have.

Enroll today at Penn State World Campus to earn an accredited degree or certificate in Statistics.

This is the key graph

The prevalence of SARs Cov 2 has been around the 0.3% in the general population since end of Q2 2020. So the PCR test results on hospital patients from Jan 2020 to Jun 2020 are mostly valid. Almost all PCR test’s done since then are invalid. Due to low prevalence of test candidates.

All quotes you see claiming much higher prevalence are “model estimates” based on test results and as such have no validity. Just another junk model.

This is a more detailed graph 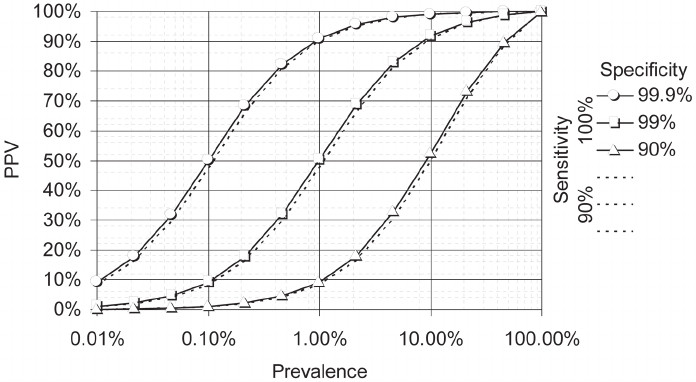 The same goes for the EU approved PCR reagents as all the current PCR reagent specificity is an estimate based purely on a performance comparison with a reference reagent. Whose specificity was calculated using the FDA method.

The key take from this is that even the test subject the all the (non specific) symptoms of a SARs CoV2 infection serious enough to seem medical attention the actual probable prevalence for SARs CoV 2 in the general population subject is less than 10%. Lost of other infections have the same symptoms. So with a false negative for the PCR test of > 50% that means that the false positive rate is still around 75%…

And you thought it was just doctors writing that was terrible.Their grasp of maths it seems is even worse that their writing.