Well I’m not noticing remotely any shame with quite a lot of vaxxed i know who’ve tested positive. No anger either at all. All just very, very happy that the vax kept them safe.

Quick scan - piece is designed to manage anger in the US or deflect.

US has already done regent so now anger is beginning methinks. Mask has fallen off over the Christmas for many in US if you go by online chatter.

Ireland probably about 2-4 months behind or longer, never underestimate the power of denial.

See how the January UnSurprise is managed and how it’s dovetailed into Mooster March (More Booster!)

I have to think you are right and that folk here in a few months will just go “what the f**k is this/was this shi*e all about”. If demand for boosters falls gradually over the next 6 months, then what chance the end of the stupid pass? One person out of approx say 60 I met in family circles over last 2/3 weeks wouldn’t hug me/shake hands, as not vaxxed - not verbal opposition but clear as day.

The Beginning of the End?

The virus part of the pandemic will probably soon be over.

My mum started hugging me again maybe 2 months ago. Rest of the family still brainwashed & masking indoors around those not of their household. No Christmas invites for the unvaxxed, or maybe because I am admittedly moody these days. There’s a lot to be moody about.

Sorry for you but hard to imagine that there are many like that - would like to think my lot more representative- vaxxed so ok.

Well I’m not noticing remotely any shame with quite a lot of vaxxed i know who’ve tested positive. No anger either at all. All just very, very happy that the vax kept them safe

Master Luke set the tone for that. The best answer is to mock their absurd assertions. If I get suspected omicron I’d loudly announce that “Your Vax kept me safe” “If you hadn’t gotten jabbed my Omicron would be much worse” etc

. This is not normal. All of these tweets in the last few days from blue ticks with almost identical message: tested positive for covid with mild symptoms, thankful for vacc and booster. 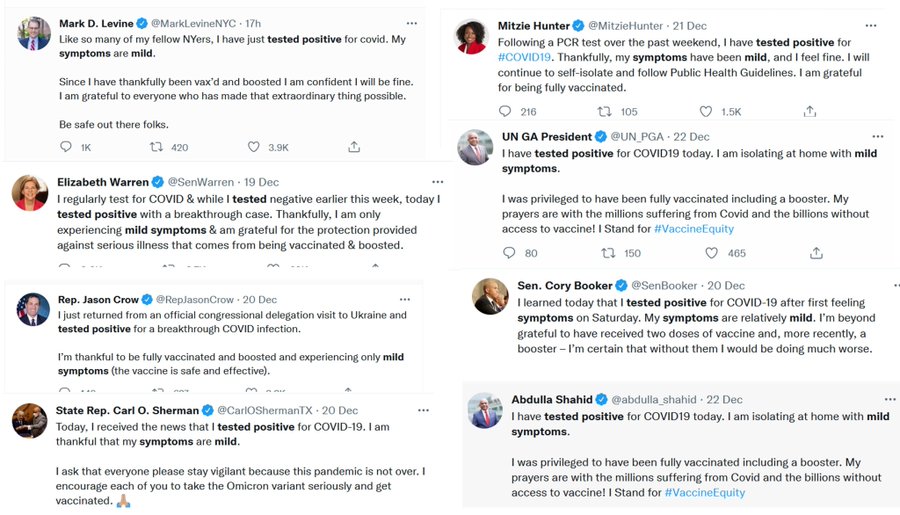 This looks like a very concerted DNC media astrorurfing campaign. You will find that the DNC social media coordinators in DC started putting out the word a week or two ago and the social media people for the elected officials were the first to start tweeting. Then the others joined in.

So the vaccine and boosters must be a complete failure if the DNC has to do such a concerted effort at social media astrorurfing.

. This is not normal. All of these tweets in the last few days from blue ticks with almost identical message: tested positive for covid with mild symptoms, thankful for vacc and booster.

Yea so social media etc. is inhabited by hundreds of thousands if not millions of bots from all walks of life, bots, bots and more bots, but this is not new thing. 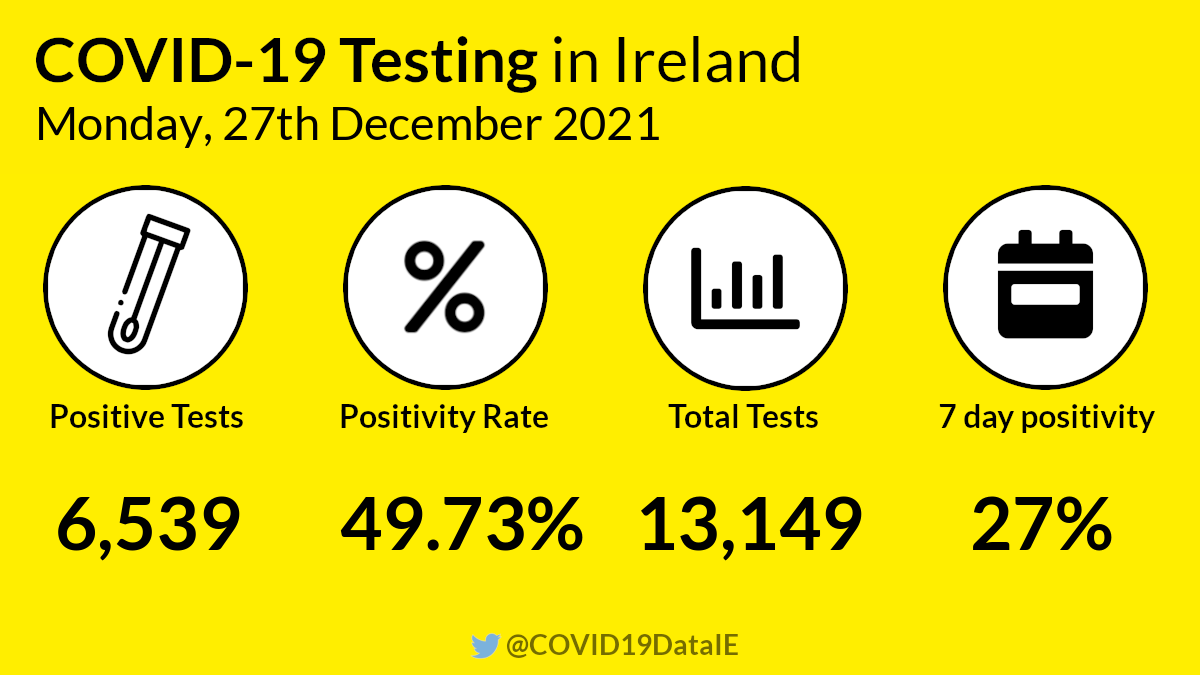 Now they are really just taking the piss. A 50% positive rate? For something there are no certified PCR reagents for.

No PCR test gets a 50% positive rate. Even when given to a high probable prevalence serious symptoms pneumonia clinical test group.

This will look really good in the future lawsuits. Real good. I thought they could just be crucified legally on the deliberate conflating of anaytical accuracy and clinical accuracy. But a 50% positive rate…

Any doctor what takes these numbers seriously is just a dangerous quack by this stage.Not fit to treat an ingrowing toenail.

" Immunology expert Professor Luke O’Neill said the only way to stop the virus “ruining” next Christmas was to get the world vaccinated. He called on the public “to keep banging the drum” and to “get down on bended knee” to appeal to people who have not yet been vaccinated to do so.

Speaking on the Late Breakfast show with Clare McKenna on Newstalk radio, Prof O’Neill said “we’ve got to help them change their minds”.

There were now five different vaccines against Covid, he said, one of which Novavox, had been developed using “old style” technology which addressed concerns expressed by some people who were opposed to vaccination because of the technology involved."

You did say you wondered what would happen to the tests with the usual microbiologists or medical scientists on leave over the holidays. If positive test rates would go up like they did in those few weeks last year.