Indeed. History has laid out many lessons, no?

Tánaiste Leo Varadkar has cancelled a number of engagements and is self-isolating following a positive antigen test.

Varadkar, immune system will be knackered from all the hard work an all.

What will it take for politicians to finally cop on to the fact that all they are doing is prolonging the restrictions without any benefits at all, at this stage it must be clear to all that what they’re doing is pointless!

All they’re succeeded in doing is made a large sector of the population germaphobic with probable long term mental issues for many.

A Korean physician suggested in a now-deleted Facebook post that those who have yet to contract COVID-19 do not have friends. Vice President of the Korean Vaccine Society Ma Sang-hyuk wrote in a social media post on March 16 that, “The adults who...

Who knew that masks were the only weapon in the fight against the plague? Nothing else matters…

Kingston Mills, Professor of Experimental Immunology at Trinity College Dublin, said it was inevitable that there was going to be a surge in Covid cases as it is "difficult to stop transmission from a person who is not wearing a mask."

“Sitting two metres apart from a person with Covid is not going to make one whit of difference because this virus is so transmissible that if you cough or sneeze in a room where there are other people not wearing masks, you will get an infection.”

Edit: Someone might explain the highlighted above. Doesn’t make any sense.

I hope they come up with a vaccine soon! 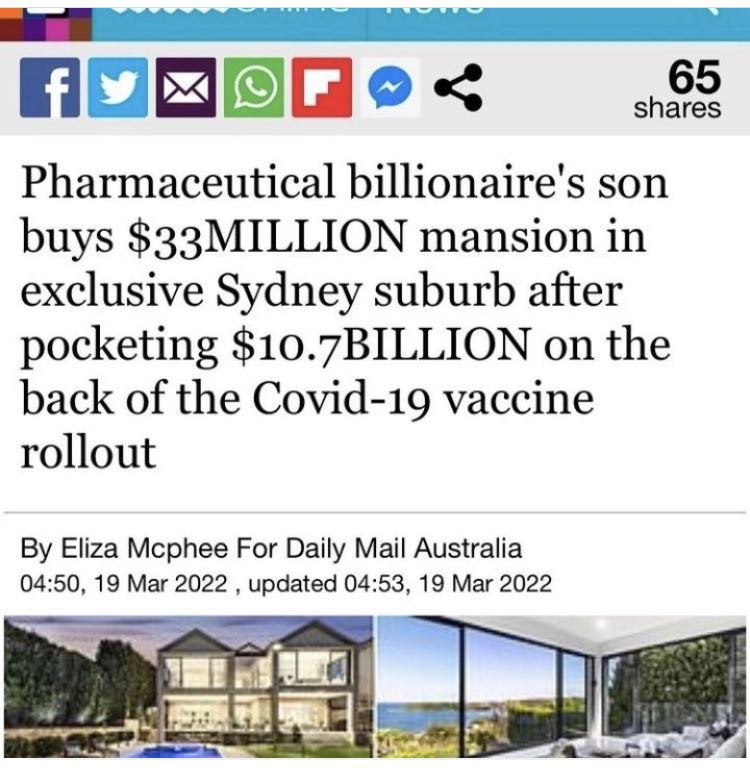 Who knows. Early trials of the Australian vaccine gave “false positive” HIV tests so that got shelved, some people are pointing out the gp120 thingy in the spike protein that looks like an insert from HIV. Then some say HIV was engineered as well & injected into Africans by smallpox or polio vaccines. Who knows, lots of rumours & stories out there.

Do I think repeated shots of the same antigen could cause immune issues? Yes. Antibody Dependent Enhancement was the problem with all previous coronavirus vaccines, animal & human.

Holohan to step down as Chief Medical Officer

Chief Medical Officer Dr Tony Holohan, who led the response to the Covid-19 pandemic, is to step down from his role.

I didn’t read the small print. He’s getting a Professorship at TCD.

You know, I had not really looked at the AID’s literature for years. It was obviously all bullshit many years ago. Had a look at one of the more recent subject reference book recently. F*cking hell. Even more batshit crazy than SARs CoV 2. Most people in the West diagnoise with “AIDS” have no symptoms. And never develop any. Just a positive test. And AIDs in Africa is a completely different disease epidemiological speaking. Basically zero overlap with AIDs in the West.

People like Duesberg always said that the virus cause theory had fundamental flaws. The virus would have to unique properties not seen in any other virus. Whereas an environmental cause (i.e drug use) ticks all the boxes. Medically speaking.

The literature on the standard AID’s (antibody) tests makes the SARs CoV 2 mRNA vaccines look like rock solid safe science. So even less reliable than low prevalence RT/PCR SARs CoV 2 tests. Its such a dodgy test that I would be very surprised if the immune system disruptions caused by mRNA vaccines did not cause a large increase in positives.

Thats does not mean that mRNA vaccines “cause” AIDs. It just means the immune system response just triggers more positives in a complete garbage antibody based screening test. Although with the immune system problems caused by mRNA vaccines long term that would come under the syndrome definition for an Acquired Immune Deficiency Syndrome.

It funny how many people never realized that a syndrome is not a disease. It just a collection of common symptoms that seem to be associated in some way. That all. Nothing more.

Surprised you’re going down the AIDS denialist route, jmc. A lot of those sociopaths have now passed away, but would someone like Christine Maggiore’s daughter fall into the i/v junkie or gay man category?

And we’re off and running again…

Whats with this “denialist” sh*t?

Either HIV has a demonstrable infection mechanism and full cell pathology or it does not? Either AIDS is an infectious disease spread by a pathogen with a standard epidemiological profile of such or it is does not.

Thats how this stuff works.

As neither have been established with the certainty of other endemic infectious diseases in the last 40 years despite upwards of $30 billion spent on researcher then it looks like bullshit to me.

I was in San Francisco in the 1980’s. I was there during the Great Dying of the early 1990’s. I can tell you exactly what the Castro was like back then. I remember leading scientists with serious international reputations being shouted down and threatened live on radio by ACT UP “activists” because they dared to ask the relevant epidemiological questions. You know, science. By the early 1990’s all independent opinion was shut down. by “AIDs activists”.

In SF General in the late 1980’s the AIDs ward was full of three types of patients. IV drug uses. Gay men who frequented bath house or those who had sex with them. And those exposed to tainted blood products derived from the blood of the first two groups. Now 35 years later when you look at the stats for those with a full SYMPTOMATIC acquired immunity disorder the epidemiology is almost the same. The general population breakout which was a huge deal back in the 1980s and pushed hard by the HTLV III/HIV guys never happened.

There has been only one causation hypnosis acceptable for research. HIV. But still no idea why HIV should have such unique properties. There could be an environmental co-factor, which was Duesbergs (and others) main thesis with possible HTLV III pathology. But the activists vowed to destroy him professionally Which they did. And others took note. Or it could be something complete different. Who know. Because the research could never be done.

The numbers of people with AIDS “cases” you might see are garage clinically speaking. Almost all big increases due to changing criteria. Not actual general population prevalence. See page Page 25 here

Understanding the HIV/AIDS Epidemic in the United States: The Role of Syndemics in the Production of Health Disparities (Social Disparities in Health and Health Care)

for the changing case definition over the decades. Now look at the full symptomatic clinical case numbers for the same time period. Again, epidemiological unique for an infectious disease. Huge increase in cases, decline in deaths per 100k from symptomatic cases. Mostly due to behavioral changes in first decade.

For such a low prevalence disease AIDs screening tests are worthless. Same problems as with SARs CoV 2 screening tests. As no actual causality mechanism at the cell level has been shown conclusively (mostly hand waving) full symptomatic clinical cases is the only medically reliable number.

Even in the 1980’s for the very small at risk group ( < 0.3%) symptomatic AIDs was very difficult to acquire. The number I heard from SF Gen at the time for AIDs were a vanishingly small R0 for an infectious disease. I knew people who shared needles a few times with people who died of symptomatic AIDs. All still alive four decades later.

So even in San Francisco in the 1980 and 1990’s if you were not in the two at risk groups (about 98%+ of the population) your risk of catching beubonis plague was higher than acquiring AID’s. (The local squirrels can carry plague. A few cases every decade. Another reason to hate gray squirrels…)

Thats how much bullshit it is. Dont want to catch symptomatic AIDs. Dont share dirty needles, dont have sex with large number of gay men. The bathhouses are open for business again in SF you know. Thats were most local symptomatic cases still come from. That and the really stupid junkies.

As I said I dug though the recent literature. These books.

Not a lot has changed in the last two decades since I last did a deep dive. The HIV hypothesis is all bullshit, scientifically speaking. If its the primary cause there should be a mountain of rock solid evidence by this stage. Especially why it never became a general population disease. Still no closer to understanding why the immune system of very specific at risk groups collapses they way it does. Looks like drug use related to me. Given the many document cases of the harm MDMA etc, meth synthesis trace residues do. Let alone from the cutting agents. Almost zero research on the subject. Thats where I’d look for a causality link. Epidemiological speaking.

What I have learned over the years is that anyone who uses the term “denialist” knows f*ck all about the subject in question but is an unquestioning believer in the narrative. If tomorrow someone publishes a paper showing exactly why and how the HIV virus only trigger a response in the target cells of the very specific at risk population in a reproducible manner then my response would be, fantastic, thats another mystery solved. Maybe it will tells us more about the vagaries of the immune system. Because thats how science works. But with such a totally politicized area of medical research like AID’s until that day, its just all self serving bullshit. One way or another.

The interview between Kary Mullis & Gary Null, he said he looked into it… couldn’t find a proper study, reference or citation for “HIV causes AIDS”. Nothing. Eventually asked Luc Montaigner at a conference thinking “he’ll know”! Was still genuinely thinking he’d overlooked it, or something. (I’m now paraphrasing the gist of how the meeting went) One or two suggestions were made, Kary said he’d read them, they weren’t original papers proving a causal link.

He said then Luc then just walked away. Said then he was like…

The whole segment is worth watching, but that particular bit starts at 3:20. There is another interview I think describing the encounter in more detail, but this is all I can find right now.

I remember that interview because it was one of those - No Shit, Sherlock - moments. Because i had followed the whole Gallo / Pasteur Institute lawsuit scandals in the 1980’s I knew there was no paper. One of the reasons why I used to check back every now and then was see if anyone actually had published the first definitive paper showing the causal linkage between the HIV virus and full clinical AID’s. I gave up about 20 years. The trawl recently was the first serous dive in 20 years. Still nothing. I did it to confirm the parallels with the SARs CoV 2 fiasco. Which are all there.

Except the SARs CoV 2 virus actually can cause a respiratory infection. And the corona virus interaction with the host cell and immune system has been well documented in the literature.

There has never been a problem with the published science of corona viruses. Its all there. The problem was the catastrophic public health response to what was a relatively minor novel infection.