Look at the two charts — they show the liquidity in the banking sector and the exchange-rate dynamics over the last two years. They should be pretty frightening, as they both show that Russia’s economy is entering crisis territory.

Over the last two months, liquidity in the banking sector has been drying up. It was a liquidity crunch that caused the crash in 2008, and the pink zone in the liquidity chart shows that it went negative in 2009. In other words, the government was forced to bail out the banks to the tune of $66 billion — 10 percent of the country’s entire hard currency reserves — to keep Russia’s financial sector afloat.

Happily, the Kremlin was successful and the banking sector did survive (unlike in 1998). Hats off to the now-ousted Finance Minister Alexei Kudrin, thanks to whom Russia had about $600 billion in reserves, plenty of money to keep the sector liquid and alive.

Now liquidity is drying up again, and the sector has reached the point where the interbank market will seize up if it reaches zero. If liquidity goes negative again, bankers will start worrying about who is going to go bust and that will mean lending between banks will freeze. That would be bad news as while the biggest 50-odd banks have real businesses, the remaining 950 banks do not and rely on the interbank market, rather than depositors and corporate clients, for funds. 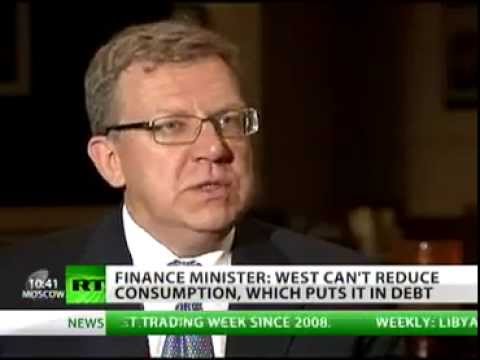 (Alexei Kudrin seems to speak English with an Irish accent)