It seems that half was paid at some stage and the other half was not forthcoming so back to court they went again !!

AN auctioneer alleged to have secretly profited from selling an elderly woman’s lands to a company with which he was connected, has been told to pay over €850,000.

Colm McEvoy has been ordered by the High Court to repay the outstanding amount under a settlement of proceedings against him.

This money is the second half of the €1.7 million settlement.

Despite this breach of his duty to his client Colm still appears to be a member in good standing of the IAVI.

Has anyone asked Robert Ganly the IAVI president whether the IAVI is prepared to allow this person to continue as a member , unsanctioned even ???

Mr Justice Iarfhlaith O’Neill yesterday granted judgment for some €857,824 to Mr Murphy against Mr McEvoy and Colm McEvoy Auctioneers Ltd, also of Fairgreen, Naas, after being told the defendants had failed to honour terms of settlement requiring them to pay that sum by January 20.

As someone who has gone to college for 4 years (already having a degree) just so that I would be eligible to join the IAVI, I am rather disappointed that this fella is still a member.

While I see from reading the article that he settled the original case out of court and therefore didn’t have to admit guilt it is obvious why he would have done this.

I think I shall ask Mr Ganly for a response.

I have reserved my comments on this case.
Im afraid my views could contravene the libel laws.
Better to stay quiet.

I too considered the libel laws.

However, the case the articles in yesterdays papers refer to are really from last year, the court case from two days ago is only an enforcement.

What was that quote…“The only thing necessary for triumph of evil is for good men to do nothing.”

If enough IAVI members look for action, it should be at least investigated.

Shane Ross has looked into this, he even rang up Colm McEvoy and Robert Ganly to get their sides of this story.

A most instructive article on the state of regulation of auctioneering . Well done Shane .

Colm McEvoy has been expelled from the IAVI, the ad below appeared in the Dec 24th Irish Times:

That only took about 3 years

To post a jpeg you upload it to photobucket or flickr, get the link for it , then post it in here in IMG tags not URL tags and presto.

it may have taken 3 years, but the IAVI still did it, so credit where it is due.
I wonder where the Actuarial Society and Accounting Bodies as quick to act with some of their members at the top of our banks?

Just read the O.P.
Excuse my ignorance, but is’nt that theft? Pretty big theft at that.
Did he do any jail time at all at all??

That only took about 3 years

To post a jpeg you upload it to photobucket or flickr, get the link for it , then post it in here in IMG tags not URL tags and presto.

Thanks, here goes so:

You linked a thumbnail not the original photo Lobby, log back in again and see if there is a full size link in Flickr ??

You linked a thumbnail not the original photo Lobby, log back in again and see if there is a full size link in Flickr ?? 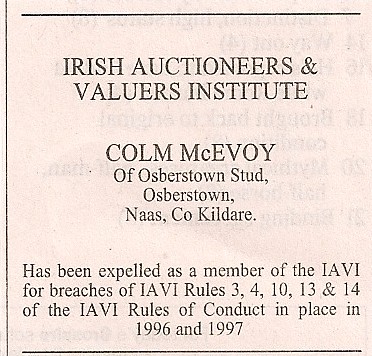 So what exactly does being expelled from the IAVI mean ?

Is the IAVI much the same as the SIMI in the car industry where membership is optional but not essential ?

So thats all of the following.

13.1 Save in cases where a regular client engages a member on a basis where a fee norm is clearly implied or understood, a member shall, as soon as practicable after receipt of instructions issue a letter of engagement to all clients, confirming:

13.2In cases involving a proposed sale or letting of property, the member shall also confirm in writing to the client prior to commencement of the marketing campaign:

13.3In cases involving a proposed sale of property, the member shall also confirm in writing to the client prior to commencement of the marketing campaign:

b) Where a member acts as a financial or insurance intermediary or broker, or has a financial interest in an entity providing such services, the member shall provide within the text of the letter/s of engagement or confirmation a clear statement of their involvement.