Everyone still seems to be ignoring what impact the 100k+ laid off building workers, 5% of total employment, are going to have on the wider economy.

Population gorwth of 1.5% per annum. Assuming constant household size that means as a ball park maybe 30,000 new households per year.

Still means the country will be overbuilding with 40,000 completions.

They also mentioned that they expect that the population is expected to grow at roughly 1.5% per year up to 2011. IF that were to materialise that equates to roughly ~65k growth per year. With an avg. household size of 2.6 that means fundamental property demand based on population growth going forward would be around 25k dwellings per year, and that is ignoring the current inventory.

Here is the full link to the report 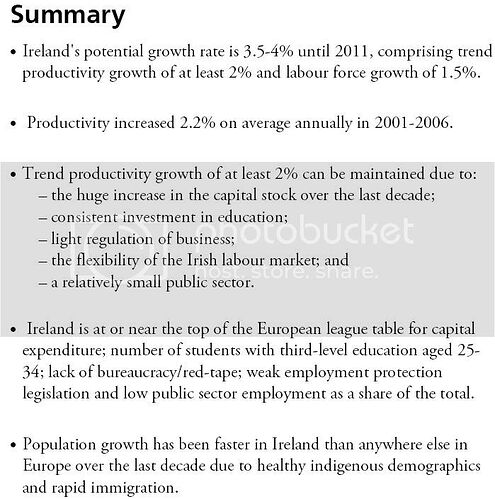 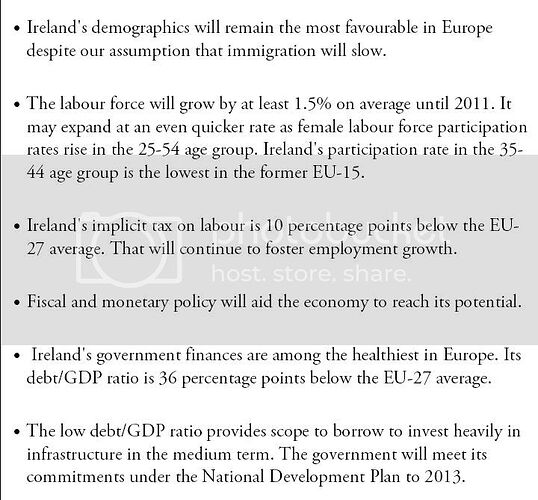 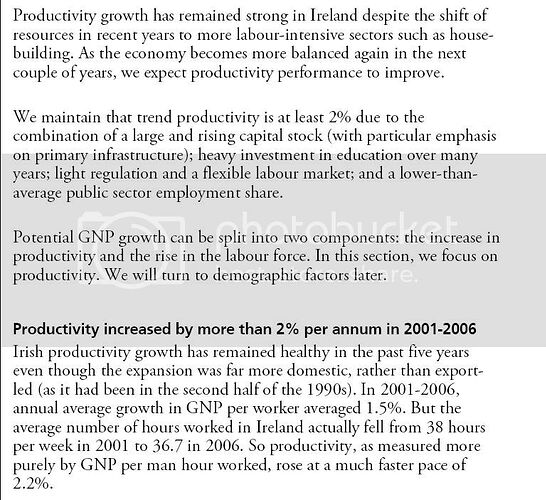 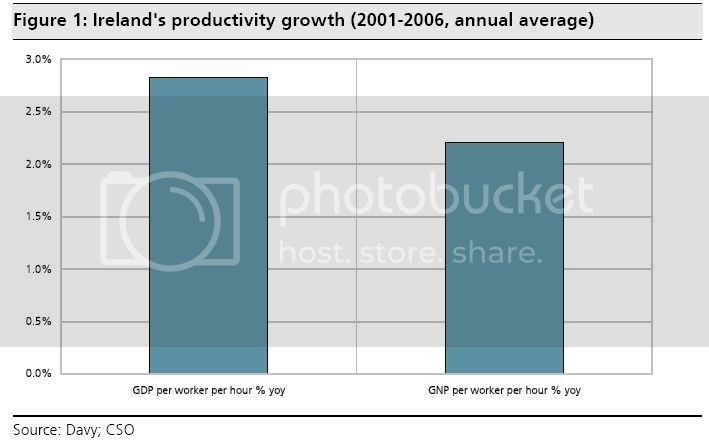 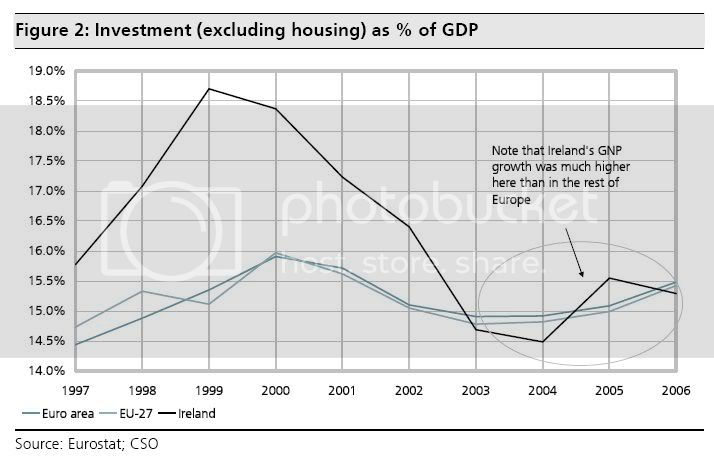 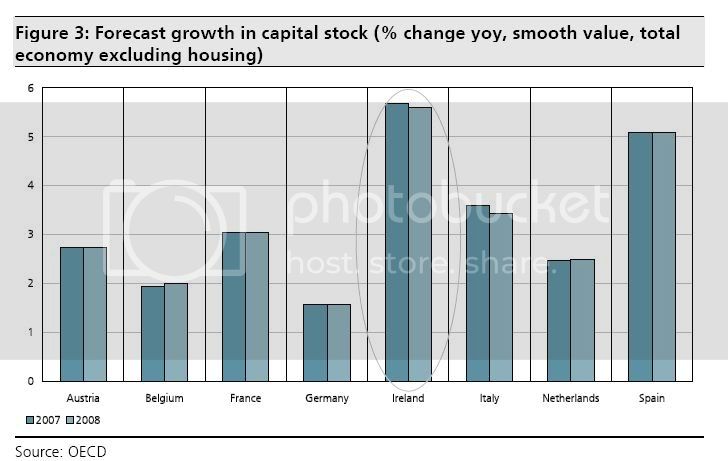 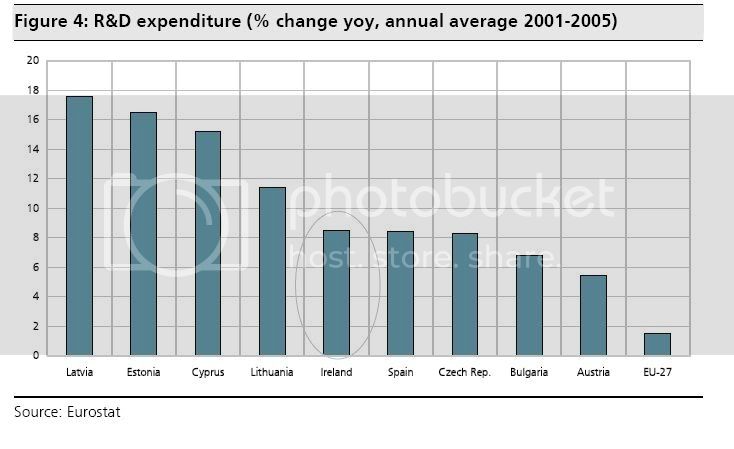 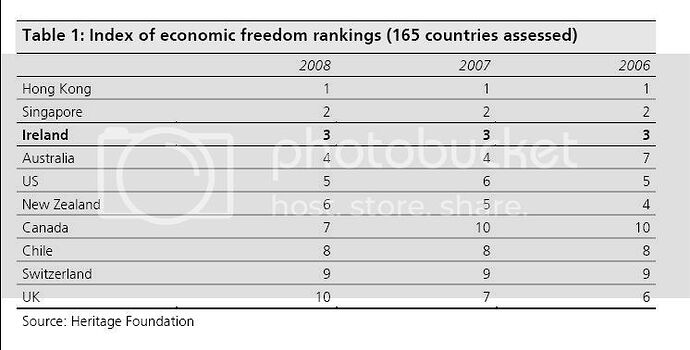 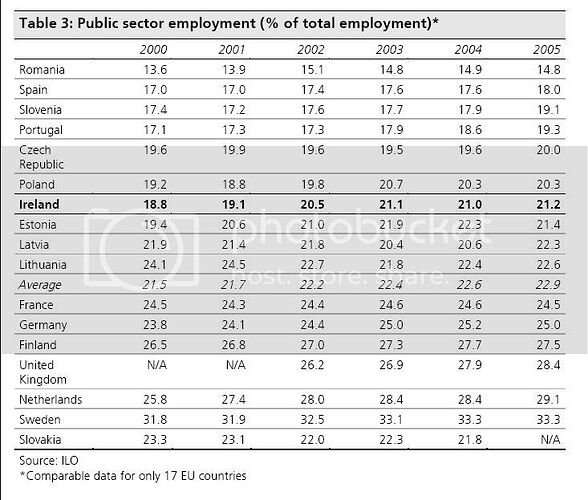 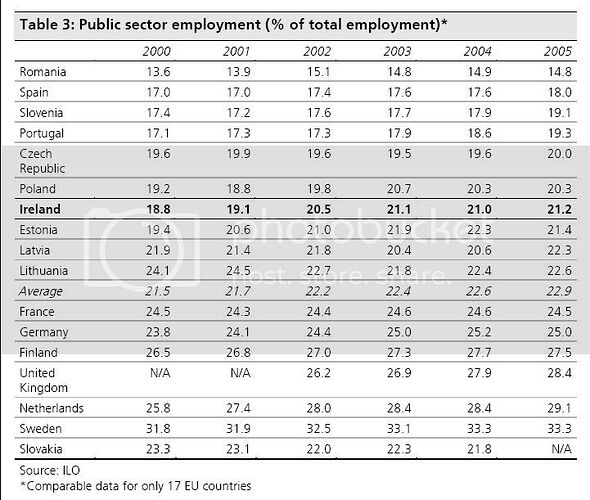 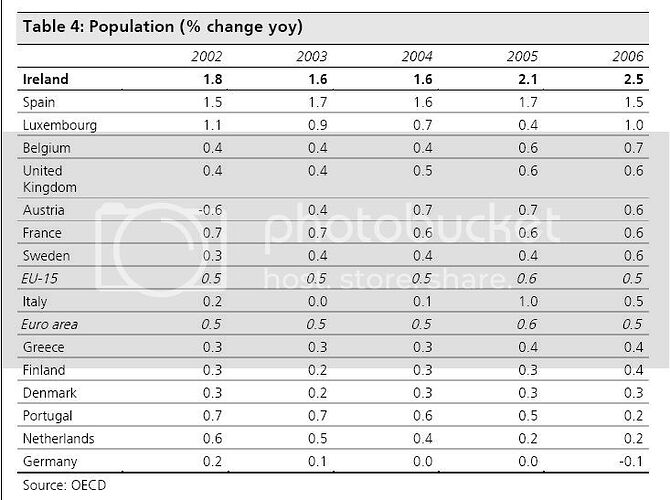 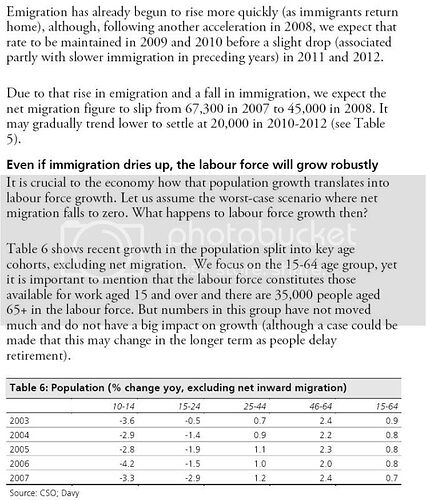 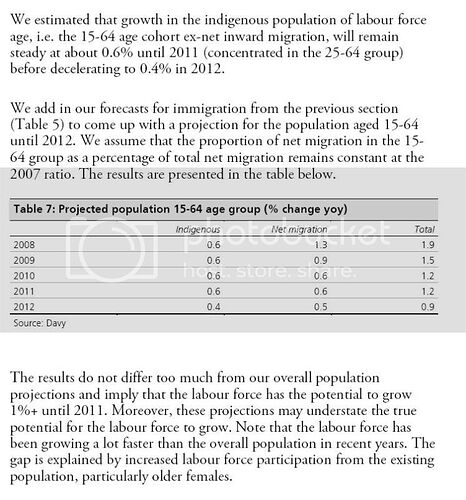 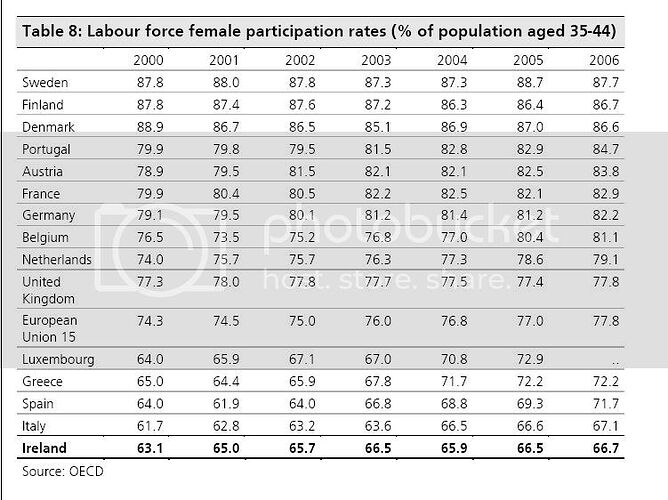 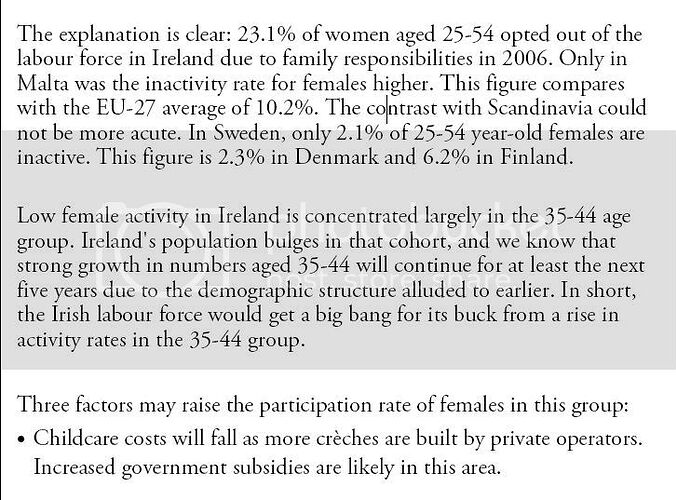 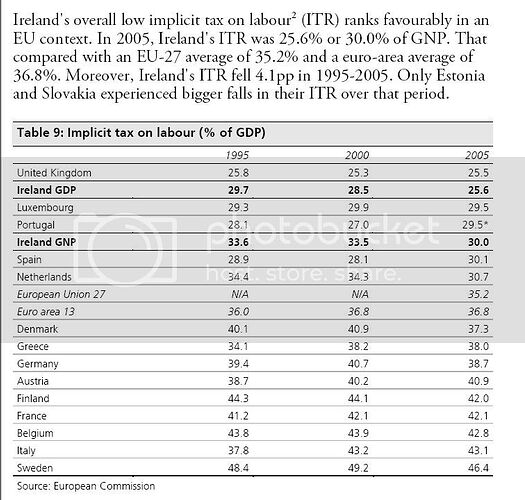 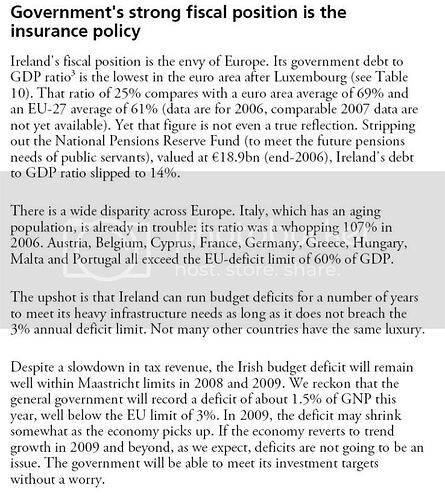 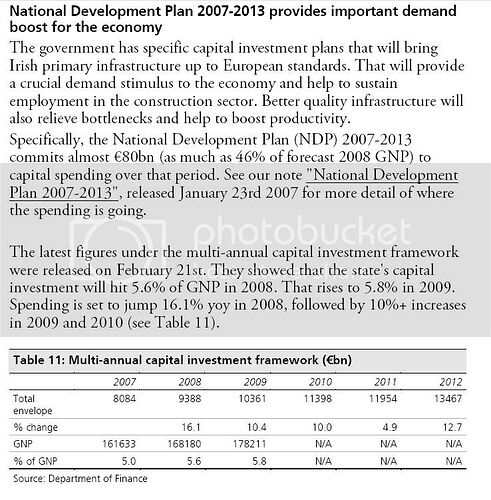 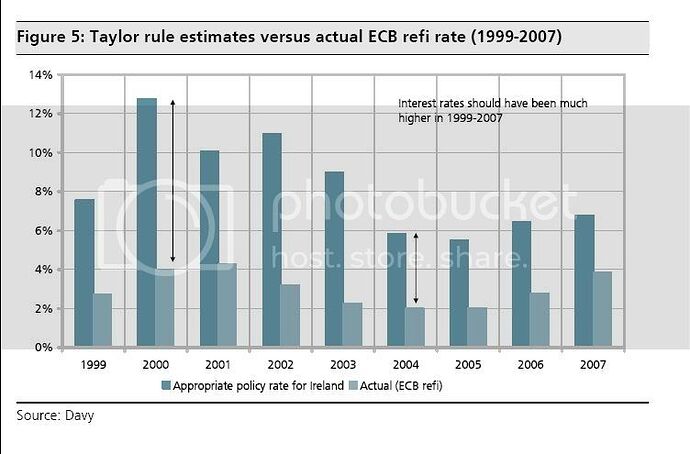 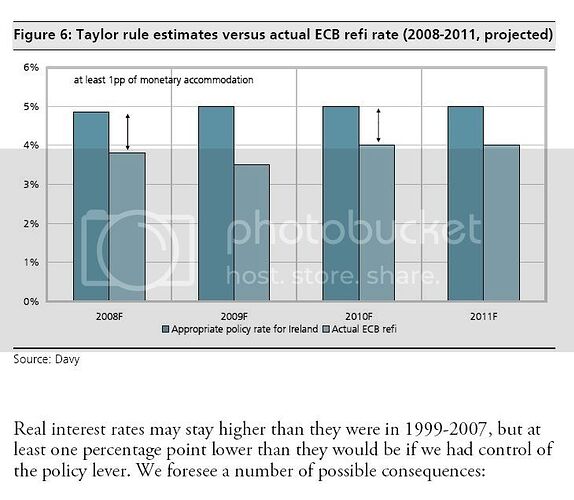 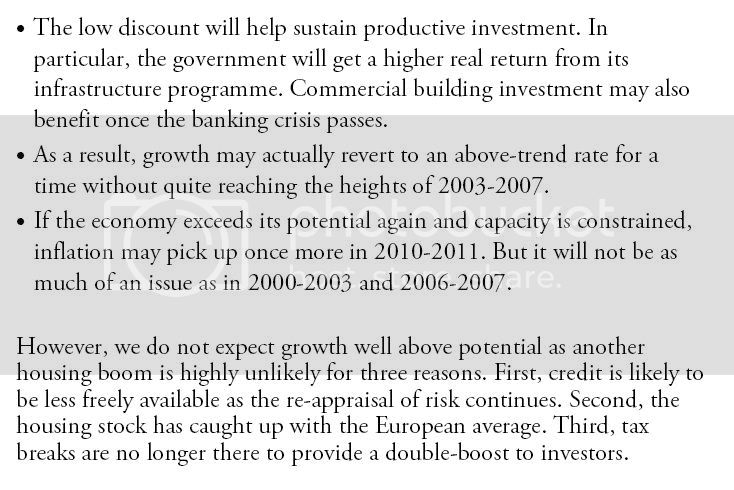 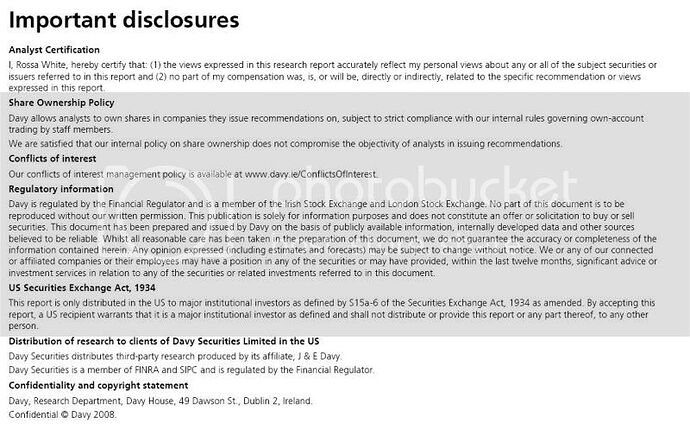 Unless of course you’re referring to the ones who dump the kids in the creche and spend the day shopping with friends in the Dundrum town centre. Those are another another matter entirely…

No the women arent lazy, the creche fees are too expensive.
Public sector employment : The Average is 22.9% out of the countries listed, we are at 21.2%.

We have a tiny army, police force our navy, for an island nation we have an almost non existent navy and air force. Getting drugs into this country should be made a little harder considering the amount of money is costs us.

Where the hell is all the state money going? Why didnt we have an army twice the size in the 1980s when we had such unemployment levels? with an engineering division building roads and bridges (imagine the m50 toll bridge wasnt tolled

). Even the most capitalist nation on earth did state projects to ease the great depression.

The cohort with the majority of stay at home mothers is from 35 yrs old upward. Our population is going to nose dive.
This report chooses to exclude the house market from its figures now that its deflating.

The report likes to point out the differences between Ireland and the EU - demographics for example. I cant see our demographics going any other way except the way they have gone in Europe. The sub 35yr age bracket are caught with mortgages and creche fees. Having children could cripple people financially and put them behind in mortgage fees.

Thanks Pinsters for uploading graphs etc. The report is very comprehensive, but to me it gives a very differnt and worying view as to the direction our nation and continent is headed. The huge problem with Europe is the collapsing birthrate. Our demographic profile is rapidly an aging one; the fact that it is younger than the rest of the EU is immaterial.

Germany tells you that reversing these trends can be hard. There, and elsewhere, fertility rates did not merely fall; they went below what people said they wanted. In 1979, Eurobarometer asked Europeans how many children they would like. Almost everywhere, the answer was two: the traditional two-child ideal persisted even when people were not delivering it. This may have reflected old habits of mind. Or people may really be having fewer children than they claim to want.
A recent paper* suggests how this might come about. If women postpone their first child past their mid-30s, it may be too late to have a second even if they want one (the average age of first births in most of Europe is now 30). If everyone does the same, one child becomes the norm: a one-child policy by example rather than coercion, as it were. And if women wait to start a family until they are established at work, they may end up postponing children longer than they might otherwise have chosen.
When birth rates began to fall in Europe, this was said to be a simple matter of choice. That was true, but it is possible that fertility may overshoot below what people might naturally have chosen. For many years, politicians have argued that southern Europe will catch up from its fertility decline because women, having postponed their first child, will quickly have a second and third. But the overshoot theory suggests there may be only partial recuperation. Postponement could permanently lower fertility, not just redistribute it across time.
And there is a twist. If people have fewer children than they claim to want, how they see the family may change too. Research by Tomas Sobotka of the Vienna Institute of Demography suggests that, after decades of low fertility, a quarter of young German men and a fifth of young women say they have no intention of having children and think that this is fine. When Eurobarometer repeated its poll about ideal family size in 2001, support for the two-child model had fallen everywhere.
Parts of Europe, then, may be entering a new demographic trap. People restrict family size from choice. But social, economic and cultural factors then cause this natural fertility decline to overshoot. This changes expectations, to which people respond by having even fewer children. That does not necessarily mean that birth rates will fall even more: there may yet be some natural floor. But it could mean that recovery from very low fertility rates proves to be slow or even non-existent. economist.com/world/europe/d … id=5494593

What we should be doing is first of all is arrive at the conclusion that our descendants are facing an almighty problem. If EU leaders had any sense, they would be going all out to try and stall the deterioration in our birth rate; but no, they are only interested in exploiting our youth to pay EU pensions. The Davy Report is buying into this rubbish by suggesting that in addition to exploiting our youth that more ladies can go into productive work. I’ll say it now, loud and clear, the most productive work our young ladies can do to improve the economy long term is to have and rare children at home in her own house and most desirably be supported by a bread earner. Just have a read of the following report by Eurostat

It is no big deal to go out to work and make money; any kind of Gobshite can do that! The real tricky deal is for society to have the intelligence to format a way that our young can have children and bring them up in a safe and secure environment.

[the usual rant about women and children]

Is there any chance the Pin could have an Ignore option? These rants are getting tiresome. I can’t take the crap.

WTTR your absolutely bang on there imho .

The falling birth rate is the hidden Iceberg our/everyones economy is steaming towards.

It just amazes me how everyone I talk to has utterly no inkling that the breakup of the traditional single income family is the unravelling of all our futures.

The worst thing is I don’t see a way out.

Women should of course have the right to work and pursue a career if they want.
But how do we reconcile that with disastrously falling birth rates?
I really don’t see the way out of it to be honest.

The only way I can think of staving off the inevitable is to massively incentivise couples with kids to only have one working and the other producing babies (as crude as that sounds) at home, maybe making creches free too would help. Then again I’m not sure having your kid brought up by strangers is the right way to go either.

The falling birthrate could well be the end of the first world as we know it, unless we start cloning everyone or something.

The report likes to point out the differences between Ireland and the EU - demographics for example. I cant see our demographics going any other way except the way they have gone in Europe. The sub 35yr age bracket are caught with mortgages and creche fees. Having children could cripple people financially and put them behind in mortgage fees.

An interesting fact I read (howardlieberman.org/dept/sph … /irish.pdf) was that the birth rate of 15-19 and 30+ age bracket has held up since the 80’s. This would suggest that indeed, women are foregoing children to pursue careers. It isn’t until they get into their 30’s that they are having children.

Once the current 24-35 cohort are 15 years older, I would suspect that the birth rate is going to plummet dramatically (as opposed to the slow decline we’re having now).

It just amazes me how everyone I talk to has utterly no inkling that the breakup of the traditional single income family is the unravelling of all our futures.

The traditional single income family was the bastion and acceptable face of capitalism for the last two hundred years, I welcome it’s disintegration just as I don’t weep for the death of the ethnic Irish or the nationstate itself.

Grow your minds and identify with your fellow humans, we’re not here to merely propagate ourselves trying to clutch to some faint ridiculous notion of immortality, we’re here to revel in both the meaningful and the meaningless.

What is your future exactly???

Or equal economic slavery for all, one people under the euro, forever and after, Amen.

"One Nation Under the Brown Thomas Store Card "

"One Nation Under the Brown Thomas Store Card "

Actually you know, I was going to post something about Brown Thomas in the post above but thought better of it, anyhoo, I was in there today and in Powerscourt and for a North County Boy like myself, it’s extremely disorientating…

I just had to stop myself from shouting…

“LOOK AT ALL THIS OVERPRICED SHITE!!!”