Joe Biden is a sitting duck but they won’t go after him.

The argument seems to be, Trump is awful. Terrible! He’s a jerk!

But look at how awful this other guy could be!

You really are delusional. All that matters is death count. Not appearances. Not optics. We are WAY WORSE than say New Zealand or Greece. Leo and Barry’s tea matters not one whit. What Leo is not coming out with is the question, more than what he is coming out with. There is no transparency from the Irish government and Leo.

We should be WAY AHEAD of America instead of behind - we’re and island that prides itself on social cohesion.

You have people mocking Trump. Bizarre

Are we going to debate, or you are going to call me names?

Why are the US media so hard on Trump, when we have a worse death rate, you asked? Right? The Americans didn’t know how bad things were. They expected much better. They believed it would be fine. So be it.

Now yes - as for NZ and Greece - well, I think Greece could be interesting. I need to look into that.

NZ is not. Its three hours from Sydney. And thats it. That’s the only large population in close proximity to it.

Its not apples and apples.

But I applaud what they still accomplished.

IMHO, there’s more to President Trump than his critics are able to see or are willing to admit.

Some of his critics get really frazzled in the process of conveying their criticism. That’s part of the mercurial character of Trump. He’s hard to pin down and define.

He’s either an idiot or a genius, depending on who you talk to.

IMHO, there’s more to President Trump than his critics are able to see or are willing to admit.

God we are dying to tell the Truth. Dying.

EDIT: Seems the will of God was missing. Next time I guess…

Sorry all. Thought some of you were unfair…

No definite a strawman, you would be hard pushed to find direct criticism of the decision. There was a small amount of positive and negative reaction. Remembering how he was critisied somewhere by someone unspecific is a bit too much of an ask. Maybe someone on twitter wrote something bad about him. He gets some criticism/scrutiny of any decision from mild to reasonable and its called being the president.

Anyways, its turns out his dangerous blathering was just him being sarcastic.

Trump never said anyone should drink bleach but, hey,

I guess you are talking about something else entirely and not in any way responding to anyone said here. Could you clarify or be more specific?

As always you should watch the clip and make up your own mind rather than allow journalists do it for you.

They guy is musing aloud about solutions.

The problem is that the media has hysterical outrage when Trump extemporises (which he does all the time) but rather muted reaction when it is someone of whom they approve like the idiot Biden.

They guy is musing aloud about solutions.

There is a double standard.

Obama on hot mike telling Medvedev that he would make concessions to the Russians in his second term. That would guarantee impeachment frenzy for Trump.

Roger Stone had book thrown at him and seven years not for ‘collusion’ but for contacting witnesses.

Bush junior said and did many, many stupid things. But he won a second term in a landslide.

I am not a Trump fan - but I loathe the mendacious, incurious and stupid media.

Nor do you have to signpost your dislike of the media or the Democrats to acknowledge that Trump is a fuppin’ idiot and unsuitable for office.

“Unsuitable”, by your measure, but not by the measure of those who voted for him. Democracy in action, democracy manifest.

I’d much prefer to have an Irish Trump in charge of Ireland than Varadkar. And I’m not even pro-Trump. USA’s death rate is lower than ours. Varadkar is a pet of globalists. On all metrics, Varadkar is a worse leader than Trump.

I was going to give Varadkar a lower cringe rating than Trump, but do you remember his love actually talk at Downing Street and his socks thing with Trudeau ?

The people found him more suitable for office than Hilary, and arguably Biden, though you will never hear that on RTE.

He is more suitable for office than Hilary

Can you imagine if Hilary was president while all the Bill on the Lolita Express stuff was coming out ? It’s mad that people just ignore that

I have always thought Bill Clinton was a good president. I suspect a lot of Trump voters do too! 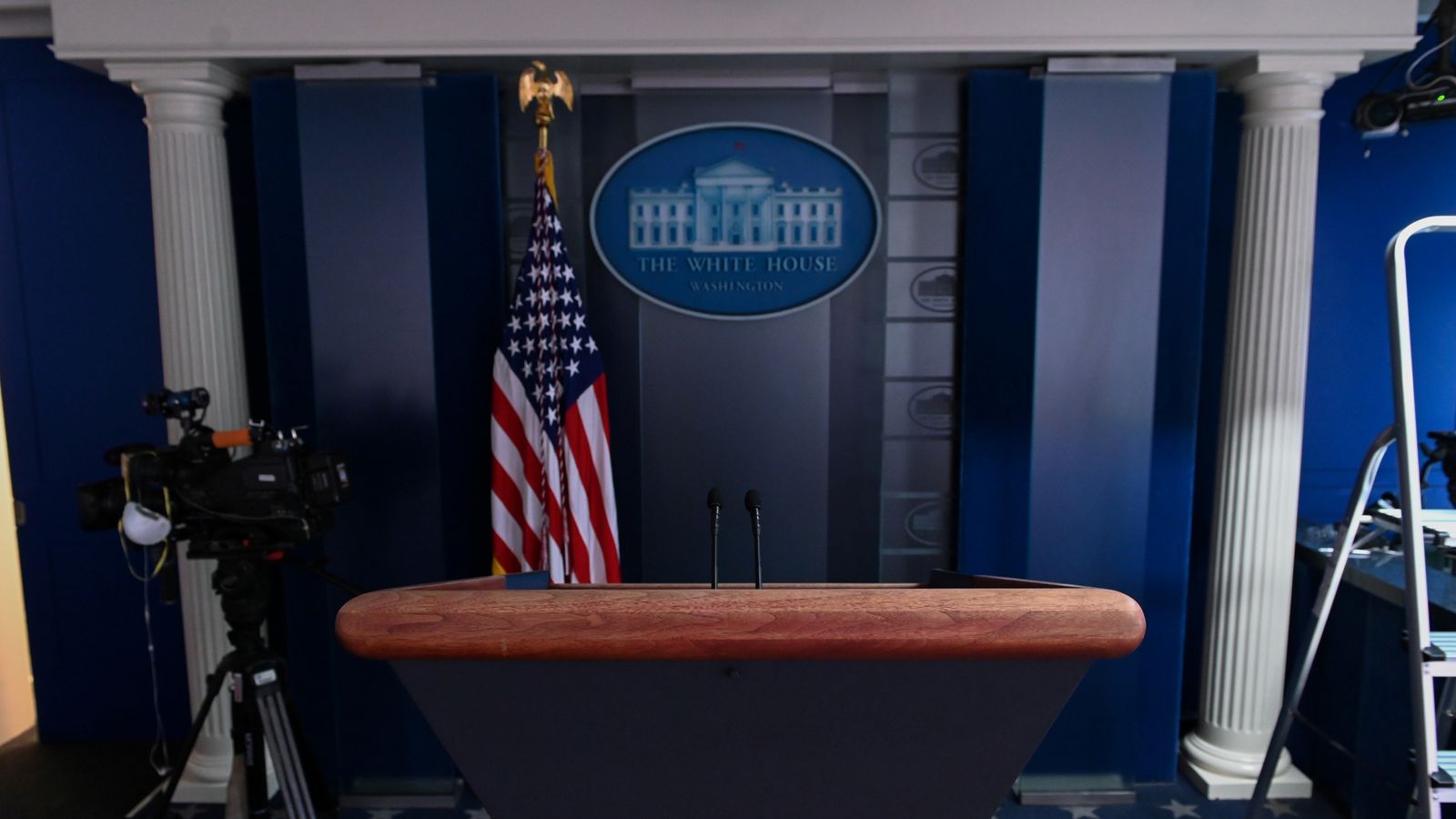 Coronavirus: Trump says press briefings 'not worth the effort' after criticism...

The US president lashes out at "the lamestream media" as he is stung by widespread criticism of his comments on coronavirus.

No more sarcastic comments then.

“Unsuitable”, by your measure, but not by the measure of those who voted for him. Democracy in action, democracy manifest.

Yes, of course, it’s my personal opinion. And I understand why people voted for him. At the time of the 2016 election I preferred him over Hilary too. But he’s turned out to be a disaster – a mean-spirited, egotistical, self-aggrandising nincompoop. At the very least, the president should be presidential, and not an offensive boor and serial public liar.

Look at this latest spat over disinfectant and UV light. First he made a complete idiot of himself by making stupid and ill-advised comments off the cuff in a nationally televised press conference. Then he and the White House doubled down by lying about the context. He said he was responding to a journalist – well, all those people that complain we only watch media-fed snippets instead of entire pressers will be able to confirm that’s a lie. He said he was taken out of context and was being sarcastic. To anyone with two brain cells, that’s false. He was clearly loving being able to deliver his own solutions right there on national TV, straight from the brilliant mind of Donald J Trump.

I can come to no conclusion other than in Trump’s tiny mind he actually believes the nation will see him as a great genius capable of out-thinking the scientists. Then, when it doesn’t work and he goes off in a big sulk, I think he believes that the nation will uncritically accept his invented version of events in which he was being sarcastic with the “lamestream media” (I mean, who – other than a five year old – even uses terms like that?).

I increasingly find it amazing that there are Trump fanbois who think he is at the centre of some big clean out of political corruption. The really fringe ones paint him as an almost messianic character. Me, I’d stick him in the naughty corner for a couple of hours and tell him there’s no more ice cream until he stops throwing childish tantrums. I have no great hopes for the next US President other than maybe they will act like an adult.

That’s it. Opinion vs. Fact. Like him or loathe him, he is the democratically elected by the voters of the US of A.

Even if you say he’s un-presidential in his behaviour, the fact remains that he is the President.

You can’t just apply some label to the man, and ‘hey presto!’ his Presidency should be removed. It doesn’t work like that (That’s playground tactics). The voters will have an opportunity to remove him, should they desire at the end of the year.

Being the President of the US of A, IMHO, he should be given a degree of leeway and a level of respect by the media. I think Trump is using the adversarial relationship with the media that has been created for his own ends.

BTW, recall Bush the 2nd, and all his foolish comments. Did he receive similar treatment to Trump?

That’s it. Opinion vs. Fact. Like him or loathe him, he is the democratically elected by the voters of the US of A. Even if you say he’s un-presidential in his behaviour, the fact remains that he is the President.

Not sure why you feel the need to repeat this very obvious point?

You can’t just apply some label to the man, and ‘hey presto!’ his Presidency should be removed. It doesn’t work like that (That’s playground tactics).

Uh, where did I do that? Where did anybody do that? Maybe you think the presidency puts him beyond reproach? It definitely doesn’t work like that.

Being the President of the US of A, IMHO, he should be given a degree of leeway and a level of respect by the media.

I agree. He should also strive to be deserving of that respect by not acting childish and moronic.

I think Trump is using the adversarial relationship with the media that has been created for his own ends.

Trump may not have created that adversity, but he’s certainly stoked it. And he has thereby willfully created further division and done much damage. Where’s the healing he said he wanted?

BTW, recall Bush the 2nd, and all his foolish comments. Did he receive similar treatment to Trump?

Yes, he did. It may have gotten worse, but the left-leaning media have long been a bunch of supercilious assholes.

The voters will have an opportunity to remove him, should they desire at the end of the year.

You forgot to quote me here.