TO MY FAVORITE PEOPLE IN THE WORLD!

In this video Trumps talks about how he sees his Military spend and the effects.

“…everybody wanted the belt…”

“ODNI has now provided almost 1,000 pages of materials to he DOJ in response to Mr Durham’s document request” + “As the President has made clear, we must be appropriately transparent with the American people”

When your losing, sulk and stamp your feet. 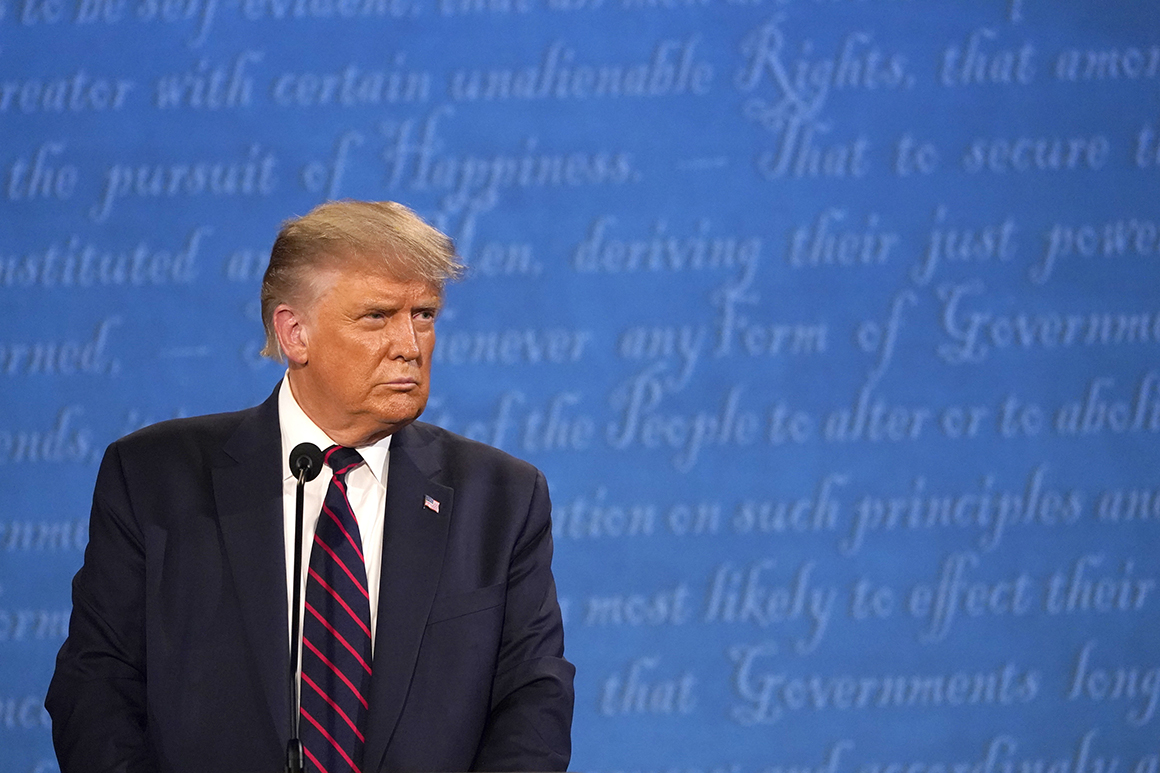 It's one of the last chances the president has to turn around his campaign.

The Walls are closing in…

“We’re going to be talking about the 25th Amendment,” Speaker Pelosi says. “The president is, shall we say, in an altered state right now,” Pelosi said later Thursday. “I don’t know how to answer for that behavior.”

I assume this is a comedian, rather the President Pandemic.

California is sending millions of gallons of water “out to the Pacific because they want to take care of certain little tiny fish that aren’t doing well without water to be honest with you.”

Sad to see the once great Property Pin descend into a poor man’s version of QAnon.

Good luck and thanks.

When your losing, sulk and stamp your feet.

If the Democratic candidate Joe Biden is a shoe in, then what’s all this 25th Amendment lark about eh?

Not a bad article on Trump. He is clearly flawed, definitely unconventional and obviously not to everyones taste.

However he is also quite clearly less fascistic in approach than many of his opponents.

Rather than use the Pandemic to increase or cement control, he has actively railed against increased State interference in the lives of the citizenry on the back of same ie the polar opposite of whats generally defined as being ‘fascist’.

Can we say the same about many, maybe the majority, of members of the ‘right thinking’ establishment clique globally?

If the president’s illness has shown anything, it is that he differs from classic strongmen in a very US way. His populism tends more to the libertarian than the repressive. The mask-spurning, the cavalier gatherings, the call to not let the virus “dominate”: it is personal freedom to which the president has shown a heedless attachment. A conventional despot would use the pandemic as a pretext to hoard and exploit executive power. Mr Trump has used it to define himself against a meddling state. His line of attack against Joe Biden, the Democrat candidate, is that he would smother America’s economic bounceback with fussy curbs on everyday life.

Mr Trump’s anti-paternalism was on show even before the pandemic. Having promised an infrastructure splurge, his main legislative achievement was a tax cut. More than the construction of a wall against Mexico, his animating goal is the repeal of Obamacare. Far from revering the military and the secret state, like your epaulette-wearing tyrant, he has found himself at odds with both. And when it comes to fiscal relief for a stricken economy, a wildly popular idea, he is only slightly more generous than Congress’s free-market Republicans. On Tuesday, he called off talks with the Democrats over a stimulus package. This is not a leader who is mesmerised by the grandeur of Hobbes’ Leviathan. Would that he were.

If a late 2005 Estate Agent / Lettings Agent / Property Developer / Banker / FF minister / IT property supplement editor retrained to return as a Doctor in 2020 I do wonder what would he / she be saying today?

Not sure what the 25th amendment has to do with trump pulling out of the debate or the fact he is losing (at the moment - total loser).

I assume pelosi is pointing out Trump has been even more incoherent than normal??

I’m curious, what fairly good reliable weighty and more than moderately predictive evidence do you think demonstrates Trump will not win by a landslide?

Here’s is an interesting piece

Poll Which Correctly Called 2016 Election Sees Another "Shocking" Outcome In...

77% of Trump voters would not admit to friends and family.

However, Trump keeps fucking up. He is running against his own interruptions. Dems have figured out just trigger and stand back.

Trump’s best hope is a massive turn-out of his base and I believe many of these mainstream polls (CNN / NYT Biden is 16 points ahead etc.) are intended to demoralise his followers and supress turn-out.

Attendance numbers at Trump rallies indicate a candidate who is gaining support, quite opposite to what gets reported by traditional news media

This is a misreading of Trump’s first term in office.
The reason Trump got tax cuts done was because it is always a prime aim of CONVENTIONAL Republicans. Trump’s other success is in appointing conservative judges is also another prime aim of CONVENTIONAL Republicans.
All the rest of Trump’s agenda, immigration, building the wall, healthcare reform is just meh to Republicans and would have required serious sustained effort on Trump’s part to get it done.
In fact the extraordinary thing is how little he got done in his first two years when he had a majority in the House and Senate

In some ways I would agree.

He clearly hasnt delivered on a lot of what got him elected, around immigration and the infamous wall for example.

However his attitude to foreign affairs has been a resounding success IMO. He has failed to start even one war (incredibly for an American administration) and has improved relations with North Korea and Russia amongst others. He has also brought large numbers of American troops home. He may have alienated some traditional western European allies but more positive than negative in terms of foreign policy.

And up to Covid the American economy was clearly booming.

Beyond all that, he manages to consistently upset the lunatic progressive element who have colonised public discourse across the west. And even if he fails to win the current election (for whats its worth I think he will win), his legacy will be the mainstreaming of a pushback against ‘progressive authoritarianism’ that is going to be a mainstay of the political environment going forward.

Ultimately however, woth reference to the initial point, the suggestion that he is some manner of fascist is nonsensensical and has more to do with education levels, declining levels of IQ or capability for independent thought, as well as an increasingly clear tendency toward groupthink on foot of media manipulation within western societies.

Id say the gap at the moment is more like 7 to 9%. There is a certain percentage who are clearly embarrassed by the actions of the last few weeks. Fox (i dont think anyone could accuse them of being lefties) have the gap at 10%.

The sorry state of the economy is a headwind that i dont think can be overcome by election day. Some of the GOP are abandoning ship in an effort at self preservation.

A few Republicans have started to separate themselves from Trump and his possible political collapse.

Not a good sign for a guy that demands total loyalty/adulation/fawning.

Edit. I did not realise USC were doing a tracking poll this year. Very consistent 9 to 13% gap since August.

Conventional Republicans favour lower taxes deregulation balanced budgets(cutting public spending on any and all welfare programmes execpt the military), free trade, easy immigration policies(cheap labour) and a robust interventionist foreign policy.
Trump differed from them in that he promised not to cut social security and medicare (public programmes that have widespread support) he was going to restrict immigration, he wanted managed trade not free trade and a big infrastructure programme.
In foreign policy he is an isiolationist at heart. There has always been an isolationist steak in American politics (think Lindbergh before WW2) but the post war consensus was internationalist and interventionist.
To say that Trump dramatically changed Military spending or troops overseas is wrong. See the graphs in this article.

Has Trump kept his promises on the military?

The president pledged to increase military funding and bring US troops home. What has he achieved?


I’m amazed he couldn’t get an infrastructure programme done. He is a developer FFS! But that would have meant working with Democrats since the average Republican politican is just not interested in any public works programme. That would have required sustained effort concentration and political skills which he lacks.
In the longterm if he is not reelected two things will remain (apart from all the judges!).
America will remain in an isolationist mood but I see this as less a Trump effect than the result of being bogged down in two long expensive wars. The American public just has no appetite for foreign interventions.
The second is free trade and this is a Trump effect. Since at least Clinton Free Trade has been a bipartan goal. The thinking was yeah there may be losers but there are far more winners and that lift’s the whole economy
Trump attracted a pool of ex Democratic voters who had become discouraged by the free trade policies of the Democratic party. They are not going anywhere and are not committed to any particular party. So i think we are in an era of managed trade.
On immigration it will be interesting to see how Republicans, post Trump, handle immigration.
I fully expect, if Biden is elected, that Republicans, after remaining quiet during four years of Trump’s profligacy, will rediscover their inner deficit hawk.
Open_Window 2020-10-13 11:01:26 UTC #3041

Is Bengahzi the “breathtaking” Trump recently referred to?

BREAKING: Allen Harrow Parrot (CIA whistleblower) tells Charles Woods (father of Tyrone Woods killed in Benghazi) that Obama and Biden sent Iran 152 Billion Dollars as a coverup for the deaths of Seal Team 6. Allen said that ALL of the proof will come out: documents and audio.

I’ve gone through years of a Fake, Illegal, and Totally Discredited Witch-Hunt, and now it’s revealed that it was a Hoax by the “other side”, which must pay a price for what they did. Think of where we’d be now without Fake & Fraudulent stories every night, for years!!!