“…she is dangerous… she is ruthless… she is evil”

You need a oatmeal brain to believe

Why is this man still on air? 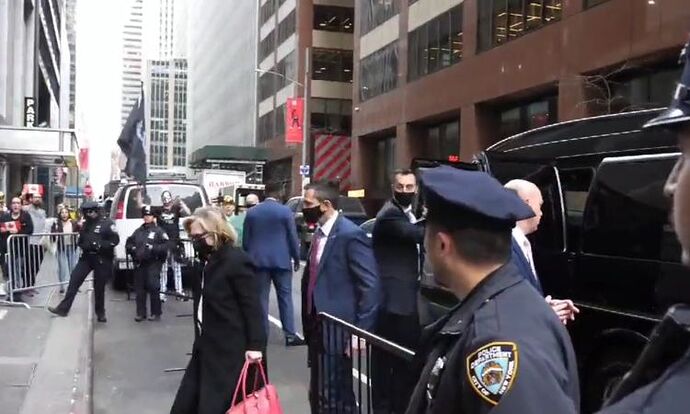 Hillary Clinton Went To NY Dem Convention And Was Given A “Proper” Welcome By...

Former Secretary of State Hillary Clinton delivered remarks at the 2022 New York State Democratic Convention in New York City amid the Special Counsel John Durham probe controversy. During her speech, Clinton accused Fox News of lying about her in an...

Do you think Hillary uses a patented Lindel for a good nights sleep these days or has she always been a sound sleeper?

President Trump: "Justice Is Coming For Hillary" FREE GIFT for all who take the survey 👉 https://trump.typeform.com/to/zHW2NgAl 👉 https://noahreport.com

Durham appeared on TV a few days ago., but Monkeypox yea…

Hillary Clinton signed off on leaking allegations of a covert communications channel between the Trump Organization and Russia’s Alfa Bank to the media.

Ya can keep track here:

( Friday Update) #DurhamWatch compiled news sources for the week of May 16,...

Compiled news sources for #DurhamWatch, your one stop for EVERYTHING in the Durham investigations...

All of the relevant articles on the Durham investigations including USA v. Michael Sussmann, in one place....

“Not My Investigation”: Former FBI General Counsel Shrugs Off Delay in Turning Over Key Text Message

Former FBI General Counsel (and now Twitter lawyer) James Baker has long been a lightning rod for critics over the role of the FBI in pushing false Russian collusion claims. Baker did not help himself with those critics yesterday when he took the stand in the trial of Michael Sussmann, former Clinton campaign counsel. After declaring Sussmann a friend, Baker seemed to shrug off the fact that he previously failed to turn over a critical piece of evidence to Special Counsel John Durham because “this is not my investigation. This is your investigation.”

Sussmann faces a single charge under 18 U.S.C. 1001 for lying to the FBI in a meeting with Baker.

In the indictment, Sussmann is accused of “mak[ing] a materially false, fictitious, and fraudulent statement or representation” in conversations with Baker. Durham argued that “the defendant provided the FBI General Counsel with purported data and ‘white papers’ that allegedly demonstrated a covert communications channel between the Trump Organization and a Russia-based bank.”

Sussmann’s choice of Baker was little surprise to critics who have long viewed the former General Counsel as one of those officials who facilitated Russian collusion claims.

On May 4, 2018, Baker resigned from the FBI and joined the Brookings Institution as a fellow. Brookings also featured prominently in developing false collusion claims. He later joined Twitter as a high-ranking attorney and has been criticized for playing a role in that company’s robust censorship program targeting conservatives and others.

On the stand, Baker explained that he continues to be a friend of Michael Sussmann, who he met during their time together at the Justice Department.
https://jonathanturley.org/2022/05/19/this-is-not-my-investigation-former-fbi-general-counsel-baker-shrugs-off-delay-in-turning-over-incriminating-text-message/

"Bombshell testimony that Hillary Clinton personally authorized giving a reporter since-debunked data about Donald Trump and Russia was part of a chess-like maneuver to “protect the queen,” a former US Justice Department official told The Post.

Jim Trusty said former Clinton campaign manager Robby Mook’s revelation Friday, which he quickly tried to walk back, actually meshed with other testimony in which Mook and former campaign general counsel Marc Elias both said they were unaware campaign lawyer Michael Sussmann planned to also provide the information to the FBI.

Both men said they would have objected to the move if they’d known.

“The strategy here is Protect the Queen!” Trusty said in an email."

“The Knights (lawyers for the campaign, the campaign manager) have drawn the line – admitting what they have to admit.”

“Legal representation simply does not work that way. You don’t ‘free-lance’ a visit to the FBI while billing your client for the time,” he said.

“The defense is basically trying to provide a fig leaf to any partisan jurors who want to acquit.”

Former FBI agent Thomas J. Baker also told The Post, “Whether Sussmann is found guilty or innocent or otherwise, [special counsel John] Durham has already laid out, in my opinion, what these people were up to and what was going on.

“It paints a picture of Sussmann colluding with other people to drag the FBI into an investigation and besmirch a presidential candidate,” he said.

Sussmann is on trial in DC on a single count of lying to the government when he met with then-FBI general counsel James Baker on Sept. 19, 2016, and handed over material that purportedly showed a cyber backchannel between a Trump Organization server and Russia’s Alfa Bank.

Opinion | Hillary Clinton Did It

Her 2016 campaign manager says she approved a plan to plant a false Russia claim with a reporter.

The latest from the Michael Sussmann Trial

From the very top of the FBI down, it was calculated and hidden from the rest of the FBI agents and the American people that they were working with Hillary Clinton to lie and hide the fact that President Trump was innocent and he had no relationship with a Russian Alpha bank.

But the The top hierarchy in the FBI were going to proceed anyway with giving the nation’s media false information to smear President Trump so that he could be set up to be impeached not once but twice.

The FBI knew that President Trump was innocent in 24 hours. These are the facts.

At least 50 people in the FBI, and the Hillary Clinton campaign including George Sorus who paid for it should be frog marched to federal prison and found guilty for trying to overthrow the President of the United States in a calculated coup using a government agency, the FBI etc.

If Hillary Clinton and the rest of her thugs are not found guilty and sent to federal prison then there is no chance the United States will ever become a free democratic Republic because this corruption of government agencies and the nations top cops and the FBI will be repeated again and again until the Democrats finally have a corrupt one party state. Because they will not stop.

“These people are stupid”

The unstated scandal: The CIA collected info on President Trump

The DNC's direct line to the CIA

…According to Durham, Joffe and his associates manipulated that data to make it seem like Trump, and those in Trump’s world, had suspicious interactions with internet protocol (IP) addresses affiliated with a Russian mobile phone provider. They then combined those allegations with the Alfa Bank hoax materials (the subject of Sussmann’s Fall 2016 meeting with then-FBI General Counsel James Baker).

This damaging information, purporting to demonstrate at least circumstantial evidence of Trump/Russia collusion, was presented on February 9, 2017 to what Durham describes as U.S. Government “Agency-2.”

That agency was the CIA

We know for sure that Sussmann met with the CIA General Counsel. We learned in January 2022 that, if Sussmann is to be believed, there were two other CIA employees at that meeting.

In other words, a Clinton supporting contractor (Joffe) obtained sensitive information (perhaps unlawfully) about the Office of the President of the United States (Trump), manipulated the information, passed it to a DNC/Clinton lawyer (Sussmann), who then delivered it to the CIA.

All on American soil.

This is important because the CIA is generally prohibited from conducting domestic operations.

Mook also said the decision to push the debunked Russia conspiracy to the media was made by him, Sussman, John Podesta, and Palmeri, and that Hillary Clinton agreed with the decision.

Q: And once you learned about it [the Trump-Russia allegations], you started discussing with the campaign whether the campaign should affirmatively push it in the media, right?

Q: And you had that discussion with Mr. Sullivan?

A: Just to be clear. This is what - I recall those people, correct.

Q: Okay. You had a discussion with Mr. Sullivan?

Q: Whether to push it in the media right?

Q: But in any event, the decision to provide this to the media was authorized by the campaign, correct?

A: We authorized a staff member of the campaign to provide it to the media.

Q: Mr. Mook, before the break you had testified that there was a conversation in which you told Ms. Clinton about the proposed plan to provide the Alfa-Bank allegations to the media; is that correct?

Q: And what was her response?

A: All I remember is that she agreed with the decision.

Then there’s this blockbuster of a comment. Counsel for Sussmann presented Priestap with messages from the FBI’s internal messaging system, in which Priestap discussed how the FBI’s leadership – Comey, McCabe, et al. – were excited about pursuing the Alfa Bank/Trump allegations:

The influence that FBI leadership (Comey and McCabe) had on the investigations related to the Trump/Russia accusations is notable - but not an exception. This is the first time we heard that the Alfa Bank hoax was pushed by FBI leadership. However, this fits their broader pattern. Recall the statement of FBI agent William Barnett. He was part of the FBI’s investigation of General Flynn and decided it should be closed down. The FBI’s senior officials, who ran the investigation from the “top down,” called the shots.

It was a long day of travel but we’re back at it on the Sussmann trial. This morning started with testimony from Bill Priestap, who in September 2016 was the FBI’s Assistant Director of Counterintelligence. His testimony was expected, even before the...

Michael Sussmann has been acquitted.

The acquittal is no surprise. This is a DC jury, after all. In the Roger Stone case, for example, we documented how a juror lied to get on the panel. (That judge didn’t care.) Making matters worse, the Sussmann judge wrongly allowed for a woman to remain on the jury, despite the fact that her daughter and Sussmann’s are on the same high school crew team. One can’t help but think that juror had her own daughter’s interests in mind – the cohesion of the crew team, sparing her of teenage drama, etc. – when she reached a decision.

After the verdict was announced, the jury’s forewoman held court before the media and expressed her displeasure that the Special Counsel prosecute a false statement case: “There are bigger things that affect the nation than a possible lie to the FBI.”

This juror was never impartial - despite her assurance to the judge.

On the facts, the evidence was more than sufficient to prove Sussmann’s guilt.

Michael Sussmann has been acquitted