ECB to hold rates steady as inflation rises - IT

The European Central Bank (ECB) is widely expected to keep the euro zone’s interest rate at 4 per cent today as inflation rises across the economic region.

Financial markets are betting the ECB will keep interest rates on hold, although gloomy economic data should prompt three cuts this year, with the first move possible as early as April.

The ECB said banks expected credit standards to tighten in all three main areas it looks at - business loans, mortgages and consumer loans, the ECB said.

High euro zone inflation will prevent the ECB from following the US Federal Reserve’s aggressive rate slashing path when the governing council holds its February policy meeting in Frankfurt today.

But ECB rates are unlikely to stay at four per cent for long. Futures markets moved aggressively on Tuesday this week to price in earlier-than-expected ECB easing, discounting 75 basis points of cuts by the year-end.

This followed data showing a surprise drop in services sector growth and retail sales across the 15-nation bloc.

Futures are even attaching a one in five chance that the ECB starts its rate-cutting cycle as early as next month.

What ye make of this?

Well, this bit surprised me:

Futures markets moved aggressively on Tuesday this week to price in earlier-than-expected ECB easing, discounting 75 basis points of cuts by the year-end.

given that the FT show this from yesterday, which I read as 4.5% by December. 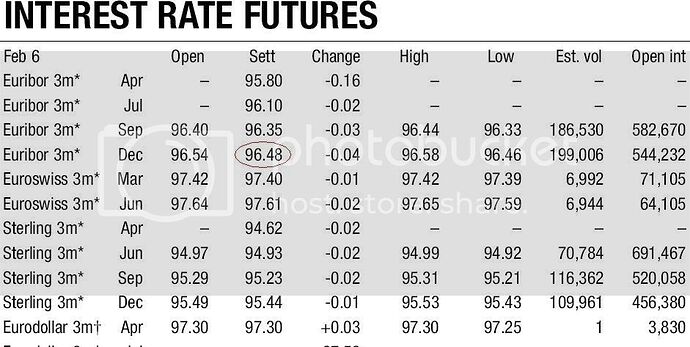 Geckko, doesn’t that signify 3.5% by December?

Geckko, doesn’t that signify 3.5% by December?

move along now. Nothing to see here…

I meant to point out markets seem to be factoring in 50 bps at present, not 75.

And indeed nothing by April, as some commentators on the radio were saying.

Only partially relevant:
The bank of England have cut their rate.