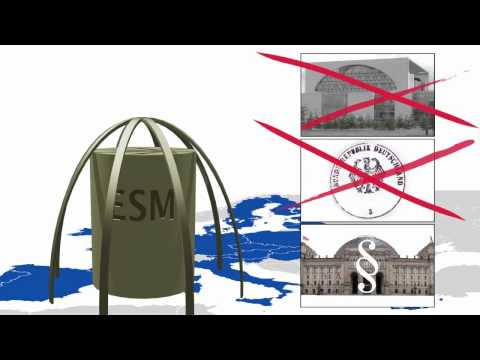 Key Details of ESM Accord

There are no independent reviewers and no existing laws apply. Thus Europe’s national budgets will be in the hands of one single, unelected body that is accountable to no one and immune from all legal actions.

Is this the future of the EU or will the German supreme court and other governments put an end to it?

On 11 July, finance ministers of the 17 euro-area countries signed the Treaty establishing the European Stability Mechanism (ESM). The Treaty follows the European Council decision of 25 March 2011 and builds on an amendment of Article 136 of the Treaty on the Functioning of the European Union (TFEU).

In July 2013, the ESM will assume the tasks currently fulfilled by the European Financial Stability Facility (EFSF) and the European Financial Stabilisation Mechanism (EFSM). Although the Treaty was signed by the 17 euro-area countries, the ESM will also be open to non-euro area EU countries for ad hoc participation in financial assistance operations.

A treaty and treaty amendment are, as of 2011, undergoing ratification in order to establish the European Stability Mechanism (ESM). The ESM would replace the European Financial Stability Facility (EFSF) and European Financial Stabilisation Mechanism (EFSM) and is in response to the European sovereign debt crisis. It is planned to be ratified and enter force by 2013, when the EFSF and EFSM expire. A treaty amendment was required to give it legal legitimacy (as it was feared Germany’s constitutional court could strike it down) and non-Eurozone states were excluded as the UK refused to participate in any fiscal integration.[19][20] Further amendments may follow once the final shape of the eurozone’s economic governance is decided.

The simple two-line treaty amendment was agreed by the European Council on 16 December 2010. The amendment reads: “The member states whose currency is the euro may establish a stability mechanism to be activated if indispensable to safeguard the stability of the euro area as a whole. The granting of any required financial assistance under the mechanism will be made subject to strict conditionality.” It is designed only to give basis to the bail out fund and calm the markets.[21] The text is being inserted into Article 136 of the Treaty on the Functioning of the European Union as paragraph 3.[22] With the amendment allowing for the ESM’s creation, the “Treaty Establishing the European Stability Mechanism” sets out the details of how the ESM would operate.[23]