I did it again. yes I did. How did I do it. I preempted the next days daily gaslight headline. I am amazed by me. I really amaze myself. Self amazement is an amazing experience

HSE not calling for reintroduction of Covid restrictions, says Reid

Oh look! You can learn how to voice clone using lyrebird with udemy now

In the interest of a SAFER internet I herby declare @blamegame is not allowed look at this content.

That whole story is Angola, I’m staying away !

Here we go again, or except, this is weird, typical but incongruent use of language.

Teenager becomes youngest person to die from Covid in the Republic

The teenager is one of six people under the age of 25 to have died in the State from Covid to date.

A 14-year-old is the youngest person in the Republic to die as a result of Covid.

The teenager’s death with coronavirus was recorded last week between November 3rd and November 9th. The person was one of 25 people who died from Covid-19 in that week.

Decoding the bought and paid for media knowing how well the scripted narrative is written as a script to trigger the synthetic confirmation bias circuits, what this poor child died of is plainly not clear and the timing, how absolutely coincidental and unfortunate or very strange.

Not a single child is that right has died of the coivds?

Or was there a comorbidity and/or something else?

Yes. A lady who landed in Dublin airport and got a taxi to Northern Ireland. Supposedly.

Yes. A lady who landed in Dublin airport and got a taxi to Northern Ireland. Supposedly.

Ha ha not that “first one”!

My poorly phrased rhetorical waffle, got me the wrong dam result!

IIRC the first weaponised use of the bogus test to create terror across the nation, was when some mysterious schoolboy tested positive, again IIRC that was used to plunge the nations parents into a world of panic.

I found it a bit hard to find the event as reported in the media at the time, if anyone can illicit a result please post it!

Truly deserves it’s own thread but in case you missed it, the epic brown nosing of the brown shirts by the throughly bought and thoroughly paid for goombeen media, here it is:

Almost all members of the Independent Broadcasters of Ireland (IBI) came “critically close” to shutting down radio stations in the wake of the pandemic, an Oireachtas committee has heard.

…“Without this, the damage caused to Irish society by the online conspiracy theorists, the peddlers of misinformation and the numerous bad actors who continue to be provided with a channel for their views by the social media and online platforms, would have been far worse.

“Frankly I shudder to imagine the consequences for local areas without the work of the dedicated men and women on stations all over the country had the misinformation gone unchallenged.”

He who pays the shudderer.

Feb 26th 2020 - No one positive yet. Lot’s of Irish in Italy.
Chief Medical Officer: People returning from areas affected by coronavirus should ‘self-isolate’ if displaying symptoms (thejournal.ie)

Feb 29th 2020 - A male in the east of the country is the first
Coronavirus: First case of Covid-19 confirmed in the Republic of Ireland (thejournal.ie)

Thanks, can you find the schoolboy story or did I imagine it?

You’re right. The male in the east mentioned above was a student.

Covid-19: Dublin secondary school to close for two weeks after pupil confirmed as first case in Rep of Ireland (thejournal.ie)

Prof McConkey said one area of concern is that “there’s really an epidemic in the unvaccinated. Over the last six weeks, we’ve seen large numbers of unvaccinated people not just in Austria but also in Ireland getting Covid.”

He added that children are spreading the virus at home.

The Prof should do house calls with his good news message.

He said: “We’re seeing an epidemic in the under 12 year olds who, of course, haven’t been offered the vaccine. And certainly there are lots of young children getting it, not necessarily in school, but often at home and sleepovers and everywhere else.”

If I am not mistaken @jmc and others have covered this in some depth, and it is exactly why you do not inject the elderly or the immuno compromised, because they can not form an immune response (and could also die) as Prof 180 finally reveals to the Irish nation, and yet the nation was petitioning day in day out by these dark creatures to let them at their “vulnerable” member of family to be the first in line… a menace minion has never refused a 180 turn to date, if it means survival, thus the pathology keeps on keepin’ on.

They are all eating their original lies and shitting out new floaters to try stay above water.

Meanwhile, a Monaghan-based GP has said staff are being put at risk when patients arrive at the surgery with Covid symptoms.
Speaking on RTÉ’s Drivetime, Dr Ilona Duffy said: “We are being put at risk here where patients are presenting to us having said they have no Covid symptoms when they’re screened by our secretarial staff and then presenting and clearly having a cough and having symptoms.”

You know, you have to wonder just what they are teaching in medical school nowadays.

One of the very basic properties of the human immune system is that its ability to respond to infection in healthy people starts to wain in late middle age. In the mid 50’s to mid 60’s. By 70 the impairment in most people is easy to measure. This is why old people get sicker at much higher rates than younger people. And why infections tend to be more serious in older people. This fact has been in medical textbooks for at least 100 years.

The way vaccines work is by triggering a responses of the immune system which trains it to respond to the target infection. The healthier the subjects immune system, the stronger the response to the vaccine and the better the protection. This has been known about for as long as vaccines have been used and is one of the factors that is taken into account when analysis of clinical trials is done.

So either this guy McConkey has been deliberately disingenuous in his previous public statements or he actual knows fuck all about basic medicine. Too busy building a career clambering up the greasy pole of the medical bureaucracy to actual remember those boring lectures back in college. Like how immunity and vaccines work.

to sell, you can see the messaging syncing within days around the world, here is a perfect example:

Covid jab likely to be ‘three course’ vaccine, says Varadkar, as approval given for over 50s and those with underlying conditions 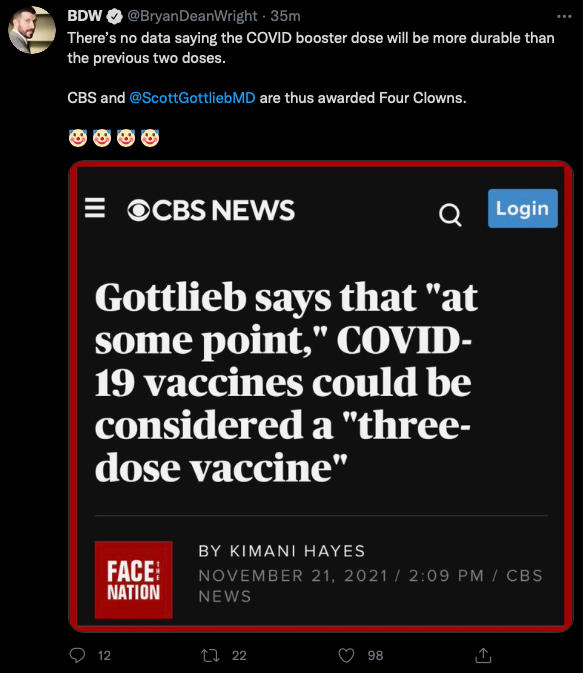 Can’t be having that now. Get Ilona on the phone.

Just when you thought it was safe to go outside… your local trusted news source is to the rescue with the mental band aid of what to do think and how to act! 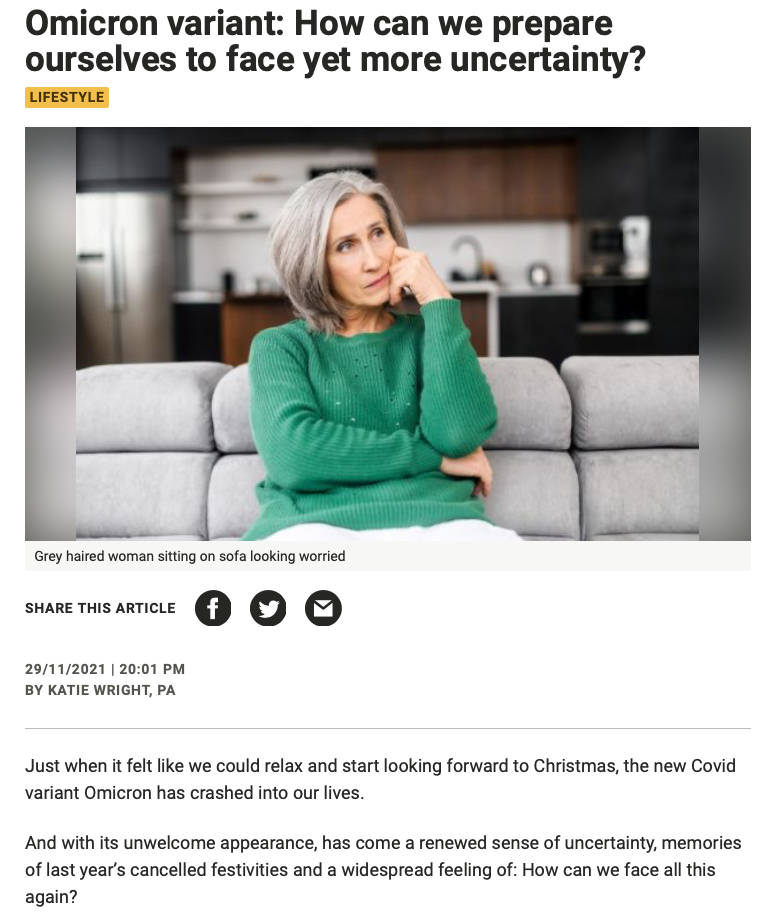 …“Change is now the new certainty,”

Love it… but, remember folks, Change Is The Status Quo - you read it here first, as early as 2009 on the pin, maybe even earlier!