Forensic Recount of the Presidential Election of 2020 Maricopa County, AZ,USA (live on camera) What is Trump at?

Looks like the Democrats are panicking sending 73 Lawyers to Arizona. A forensic audit is about to happen. At least the American voters will get to know if the election was rigged? Live cameras in the link below.

The long-awaited hand count and forensic audit of the election in Maricopa County starts Friday. Process will be live-streamed at AZAudit.org

So many people would like to thank the brave and patriotic Republican State Senators from Arizona for the incredible job they are doing in exposing the large scale Voter Fraud which took place in the 2020 Presidential Election. Their tireless efforts have led to a massive recount, ballot examination, and full forensic audit, undertaken by experts retained by the State Senate, with results to be announced within six weeks. The Democrats, upon hearing the news of the Court Order, have sent 73 lawyers to Arizona in an effort to stop this recount and full transparency because THEY KNOW WHAT THEY DID! The Democrats are desperate for the FRAUD to remain concealed because, when revealed, the Great States of Wisconsin, Michigan, Georgia, New Hampshire, and the Great Commonwealth of Pennsylvania, would be forced to complete the work already started. The Arizona recount and examination will be on live TV (OAN) for all to watch.

Why are the Democrats so desperate to stop this Election Fraud from being revealed? That answer is obvious! The Governor of Arizona, Doug Ducey, has been shockingly of zero help to the State Senate. He wants to “pretend” the election was free and fair. What are he and the Maricopa County Commissioners trying to hide? Our country needs the truth of the scam 2020 Election to be exposed. If it is not, just as if we have “no borders,” we cannot be a Great Nation. Honest elections are America’s Heart and Soul. We must never allow this to happen to our Great Country again. Thank you State Senators and others in Arizona for commencing this full forensic audit. I predict the results will be startling!

The Republican Party is demanding that Governor Ducey of Arizona immediately provide large-scale security for the brave American Patriots doing the Forensic Audit of the 2020 Presidential Election. Governor Ducey will be held fully responsible for the safety of those involved. State police or National Guard must be immediately sent out for protection. The Democrats do not want to have this information revealed, and they will do anything to stop it. Governor Ducey must finally act!

Now talk of troops before the announcement.

The democrat lawyers have agreed to a couple of weeks, starting this week. I think what the world will be looking at is a forensic recount of the presidential election of 2020 Maricopa County, Arizona. There will be a colour coordination of the staff (polo tops) to keep an eye on who does what. Trump being the trickster that he is, may have the one last Trump card to play?? We don’t know? What’s with the UV lights on the ballots? What is US space force (set up in Dec 2019) and it’s capabilities? As Biden says “Sit back and enjoy the Show”?

The Florida mystery of dormant Pentagon IP addresses - The Washington…

Maricopa County election recount being aided by a company with no “election...

Workers are recounting more than 2 million votes from the November election in Maricopa County, Arizona with the help of a private cyber-security company. Arizona republicans hired the third-party firm called Cyber Ninjas -- whose CEO had been...

Georgia will be next. There’s about 600k illegitimate votes there. Then it starts getting biblical

Peter Navarro — Georgia is going to be next!

'This is just a scam': GOP-backed recount in Arizona’s Maricopa County underway

As President Joe Biden nears his 100th day in office, Republicans are pushing a recount in Arizona’s Maricopa County and hired a cybersecurity firm with ties to Donald Trump’s “Stop the Steal” movement to conduct the review. Democrats have challenged...

Then it starts getting biblical

Panic In Arizona, How Do You Inject Evidence Legally? Sting Of The Century?

I have to say im starting to think x22 is part of a bigger psyop. I listen to him quite alot and i like him, but hes driving alot of ancillary narratives to the main ones of Fraud and trump that are a bit questionable. The bitcoin push for example - i dont have any, so maybe im bitter, but thats all a ponzi scheme to me.

Also, i wonder what the x stands for in X22, is it 3? No need for me to explain the significance of 322, if you don’t know then this post won’t interest you anyway.

Few of us been looking into Q and have a fairly solid lead that it was an off the shelf psyop dropped into the patriot population in the early 90’s, will expand on that soon. Doesn’t mean it isn’t now being used for good of course, but the strong push towards glorifying Israel in US patriot circles in the last week has me worried it was all or has been recently repurposed.

The entire Database of Maricopa County in Arizona has been DELETED! This is illegal and the Arizona State Senate, who is leading the Forensic Audit, is up in arms. Additionally, seals were broken on the boxes that hold the votes, ballots are missing, and worse. Mark Brnovich, the Attorney General of Arizona, will now be forced to look into this unbelievable Election crime. Many Radical Left Democrats and weak Republicans are very worried about the fact that this has been exposed. The DELETION of an entire Database and critical Election files of Maricopa County is unprecedented. Many other States to follow. The Mainstream Media and Radical Left Democrats want to stay as far away as possible from the Presidential Election Fraud, which should be one of the biggest stories of our time. Fox News is afraid to cover it—there is rarely a mention. Likewise, Newsmax has been virtually silent on this subject because they are intimidated by threats of lawsuits. One America News (OAN), one of the fastest growing networks on television, and the “hottest”, is doing a magnificent job of exposing the massive fraud that took place. The story is only getting bigger and at some point it will be impossible for the weak and/or corrupt media not to cover. Thank you to OAN and other brave American Patriots. It is all happening quickly!

BREAKING: Maricopa County ‘Will Not Be Responding to Any More Requests’ Regarding Audit, Openly Invites Legal Action

The Maricopa County Board of Supervisors has announced that they will not be responding to any more requests regarding the forensic audit taking place, and has invited legal action to be taken against them.

The Board of Supervisors of Maricopa County held a special meeting on Thursday, where the Board, comprised of four Republicans and a lone Democrat, and slammed the current forensic audit of the 2020 election that was ordered by the Arizona Senate that is currently taking place in the state. As National File reported, Maricopa County has been accused of “spoliation” of evidence by the official Arizona Audit Twitter account, controlled by former Secretary of State Ken Bennett, to which the Board today responded with revulsion.

The recovery of many files that where deleted below. 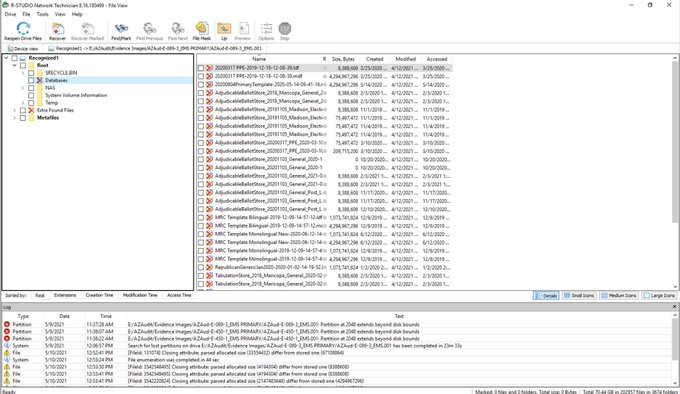 Supervisor Clint Hickman demanded that those conducting the audit send any evidence they find directly to them. “If you find something, anything, that was against the law, or was against our statutory authority, I believe we will be ready to answer that in a court,” Hickman said. “Especially when you are throwing around terms like spolation of evidence. We’ll see it in court, please bring it at that point, we’ll be happy to look into it because that’s what all this is about.”

Chairman Jack Sellers agreed with Hickman regarding the threat of legal action, and praised the entirety of the County for doing “an outstanding job,” and claiming that they were “united as one Maricopa County” against the forensic audit. “As chairman of this board, I just want to make it clear, I will not be responding to any more requests from this sham process,” Sellers continued, closing out the meeting, which was broadcast on their YouTube with comments and dislikes turned off. “Finish what you’re calling an audit and be ready to defend your report in a court of law. We all look forward to it. We are adjourned.

Arizona Senate President recently sent a letter to the Maricopa County Board of Supervisors, outlining the major issues discovered already in the audit, and offering to settle them without additional subpoenas or compulsory action. In the letter, says Epshteyn on Steve Bannon’s podcast, it reveals, “Pallet five, batch 2976, 200 pink slip total, actual total 165. They are missing 35 ballots out of that batch.” He added, “35 out of 100 is 17.5%. 10 out of 200 is 5%.”

“Do you know how shocking that is? 17.5% discrepancy in a batch is beyond belief.” He added, “In one they’ve got 18 more than there’s supposed to be, which is a 9% discrepancy. Again, if we are to have any confidence in elections in this country, how can we possibly be okay with discrepancies of double digit percentages? It’s absolutely mind boggling, anything above a tiny fraction of a percentage is unacceptable, by the way, unacceptable according to the Federal Elections Commission.” 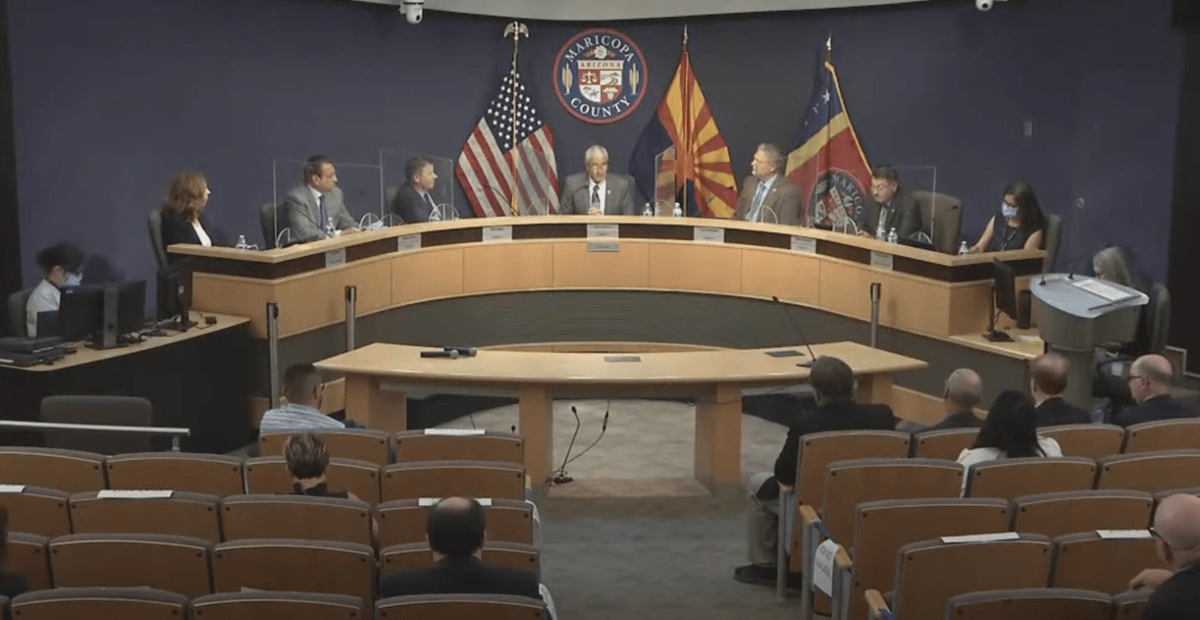 BREAKING: Maricopa County 'Will Not Be Responding to Any More Requests'...

Maricopa County has announced that they will not be responding to any more requests regarding the forensic audit taking place, and has invited legal action