Latest RED C poll would seem to contradict my thoughts on SF, but it’s over for FG.

SF have done nothing to deserve this. It’s comical. What a dumb strategy to attack them. I know it’s a tried and successful strategy in the past. But Leo builds all this momentum trying to ‘eat SF’s dinner’ on representing nationalists in the North…and then backs an RIC commentation and attacks the North’s biggest nationalist party. So dumb.

I’m sure SF won’t get the seats though. They aren’t running enough candidates for one thing.

There may be a touch of the Macrons to SF this time round.

A constructed controlled opposition which actually opposes sweet FA and simply postpones the inevitable drift to the right.

Basically PAYE families up to 140k are easy to tax and will get screwed.

So, you think being Irish is a cultural construct, that anyone can just adopt?

Interested to know what else you think it could possibly be?

Instead of derailing this thread I will PM you.

Thanks. I’ve no problem with that, but would prefer another thread so that others could contribute. Even better, let’s do both. A bit of personal contact to reduce sniping on a public thread.

EDIT: In fact, why not revive this thread on Irish and Irishness. I’ve just re-read the whole thing. While it’s mostly about the language issue, there is plenty on broader culture.

Sinn Féin has surged into first place in the general election race, with a quarter of all likely voters now saying they intend to vote for the party, according to the final Irish Times/Ipsos MRBI opinion poll of the campaign.

The poll puts Fine Gael back in third place at 20 per cent, behind Fianna Fáil on 23 per cent and Sinn Féin on 25 per cent.

The findings of the poll, which was taken on Thursday, Friday and Saturday of last week, will shock the Government party and suggest that Ireland is on the brink of an historic general election result on Saturday. Sinn Féin has surged into first place in the general election race, with a quarter of all likely voters now saying they intend to vote for the party, according to the final Irish Times/Ipsos MRBI opinion poll of the campaign.

So it looks like SF dragging support away from FF. At this rate they could finish 4 points above FF on Saturday. Maybe Leo has a chance of finishing second 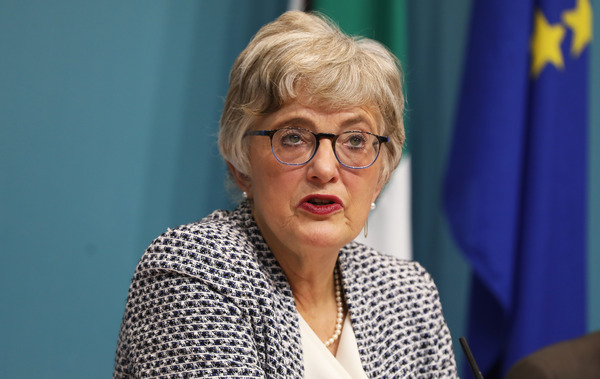 From top: Katherine Zappone, Minister for Children and Youth Affairs and Pat Rabbitte, chair of Tusla,  the child and family agency This morning. Via The Irish Times: People under investigation for…

Did @jmc ever get to the bottom of that Zappone character ? What the background of the actor is ? Where they originated from ?

Instead of derailing this thread I will PM you.

Thanks. I’ve no problem with that, but would prefer another thread so that others could contribute. Even better, let’s do both. A bit of personal contact to reduce sniping on a public thread.

EDIT: In fact, why not revive this thread on Irish and Irishness . I’ve just re-read the whole thing. While it’s mostly about the language issue, there is plenty on broader culture.

Aegis, FWIW I couldn’t get a bit of sense out him. I posted the full transcript of his PM over on that other thread I mentioned.

Holy f**k the gloves are well and truly off

Did @jmc ever get to the bottom of that Zappone character ? What the background of the actor is ? Where they originated from ?"

Still tumbleweed. Which is really bizarre.

I know a lot of people from the Cap Hill gay scene from that era went to ground after the huge Mayor Ed Murray scandal. The gay mayor of Seattle who had been raping vulnerable teenage boys in his care. Around the time Zappone was purported to be living in Seattle on Capitol Hill. Which was a much smaller version of the Castro back then. But still, everyone knew everyone on the 'Hill back then but no one seems to remember Zappone by the sound of it.

I could kind of imagine the Seattle Times or PI maybe not making much of the story of local girl makes good, maybe, but still odd. But the fact that The Stranger, the city weekly freesheet and local institution of lefty progressive politics, has not covered the story of Zappones rise to political power is beyond belief. I dont know what this woman’s real story is but the Seattle part of the story must not bear closer inspection.

To anyone who knows Seattle for the last few decades, its media and its politics, the lack of coverage of Zappones political success in Ireland is completely inexpiable. The Stranger has given wall to wall coverage of Sawant, one of those annoying brahmin marxists, and she is only a City Council member. On the political woke scale barely a 2. Whereas a Zappone would easily be a 10.

Over the mountains in Spokane, just as much silence on the subject from what I can see.

But thats not the strangest part of the whole story. It was her involvement with the Starhawk cult in Berkeley that was the really huge red flag for me. Now we are drifting into Jim Jones territory. Even by Berkeley standards Starhawk and the people around her are completely bat-shit crazy. In a very malevolent way. Despite all the new age’ey / wicca claptrap its just a bog standard cult. There is a very good reason why you have to look very hard to find anything negative written about Starhawk. Because those who got her measure also know that people like her are very very dangerous to cross. Just like good old J.J before he fled south of the border. So best to just step away quickly and not get entangled. Nice people.

Pelosi apparently has connections to JJ too but that aside (not wanting to divert this thread), Zappone either used a different name in Seattle or never really made any grounds there maybe even did not live there at all of important years.

Maybe the thing to do here, is run some facial recognition software across the entire of the human data sphere, see what comes up, I wonder who could possibly do such a thing…

Ballygoforwards - aren’t we great ?
We had a childless, lesbian Minister for children. And then appointed an ex-Marxist as a Chairman of the Child and Family Agency - who waxed and waned ideologically, one of his only certainties throughout being the deliberate destabilizing of traditional family ethics, and who preached a left wing gospel, but lived a nice traditional right wing one in his own life.

Oh she’s been quite busy since nabbing the ministerial gig. I’ve noted these misdemeanors which the media have either ignored or in which they became co-conspirators:

On the new-age thing, this is from An Cosàn’s site:

“Transformative Learning embodies a curriculum that touches the mind, heart, body and soul in a belief that it can generate enough individual and communal energy to change lives and communities."

Are they trying to help marginalised women or indoctrinate them?

Finance Minister Paschal Donohoe is an ideal candidate for the Fine Gael leadership, according to his predecessor Michael Noonan.

Having watched the complete coverup and sanitation of the story of Harvey Milk in SF in the local media over many decades , as Jim Jones puppet and enforcer on the Board of Supes (not to mention him being a sexual predator on underage runaways) , my best guess is that knowing the history of The Stranger there must have been a real scandal to cover up for them to be this quiet about Zappone.

They did a lot of backpedaling when it became very obvious that Ed Murray had been a serial abuser of vulnerable teens in his care decades before. Because until then Murray had The Strangers poster boy for the perfect Progressive Politician. Eventually they did start printing the stories of the kids he had abused. But with real ill grace.

I thought about asking around for the real story but after the Ed Murray debacle, which is now effectually erased from local history by these people, the probability of getting any substantive info on Zappone was less than nil.

So best guess, there is some very nasty scandal that happened while in Seattle back in the 1970’s/1980’s and nobody wants to talk about it. No other plausible explanation for the local media silence on Zappones quite extraordinary political career for someone from the Capitol Hill scene. As I said, her involvement with people like Starhawk would greatly reinforce that conclusion.

There are Zappones over in Eastern Washington, in the Spokane area. But they seem to be very low profile. And given the way small cities like Spokane work no local coverage usually means a story that is not fit to print.