[Help-to-Buy scheme inflated housing prices *SHOcKER * (https://www.independent.ie/business/personal-finance/property-mortgages/hundreds-who-dont-need-it-using-help-to-buy-to-land-expensive-homes-36562749.html)
Official data shows that 5% FTB have claimed a tax refund of up to €20,000 to offset the cost of buying an expensive property, prompting calls for the scheme to be targeted at more affordable homes. Details of the 4,824 claims paid to date and raise fresh questions about whether the incentive is properly targeted at those who cannot afford to buy, or is simply helping inflate prices.

Shock as tax incentive scheme benefits people who pay a lot of tax.

They only noticed it now?
TDs have been advising tenants for years to avoid homelessness, and costing the State more, by overholding

“My office is constantly being contacted by people who are faced with the threat of homelessness due to rent hikes and because of banks encouraging landlords to sell rental properties or repossessing them due to price increases in property. I have been advising people and am now advising people nationally to refuse to make themselves homeless.
Our advice to tenants is to inform their landlord that they have nowhere else to go. They should continue to pay their rent. If a landlord is decent, and not prepared to throw a family out on the street for a couple of hundred Euro extra in their own pocket, they should accept this and allow them to stay. But either way tenants should refuse to leave the property, refuse to make yourself homeless. Break the law to keep a roof over your head if necessary.”
Ruth Coppinger TD, August 2015

This is gone past farcical at this stage

County council are happy with their tenants overholding
I issued a termination notice to my tenants a number of weeks ago. They are on RAS , so are county council tenants. I received an email today from the council stating that if they cannot find them suitable accommodation in the same area they will be overholding !! They told me to check my notice of termination that it’s in order as I’ll need it when it goes to the RTB … I was shocked at the manner of the county council put this email together … it proves that landlords aren’t protected whatsoever by them.
They give you 20% below market rent but tell you you are secure with them. They effectively told me today that I’m to lodge a complaint with the RTB and the notice isn’t even up for another two months.

They are probably a little ambitious in what they think is possible in Ireland.

That’s a typical boards thread with more heat than light.

What the local authority is saying is that **if **the tenant cannot find suitable accommodation locally **and ** she chooses not to move on **then **there will be an overholding situation.

This is not something the local authority can either prevent or encourage.

They are sensibly advising the landlord to have their ducks in a row in case it goes legal.

Just read all of that.
Sickening.
that TD will be quoted ad nausem at the next election 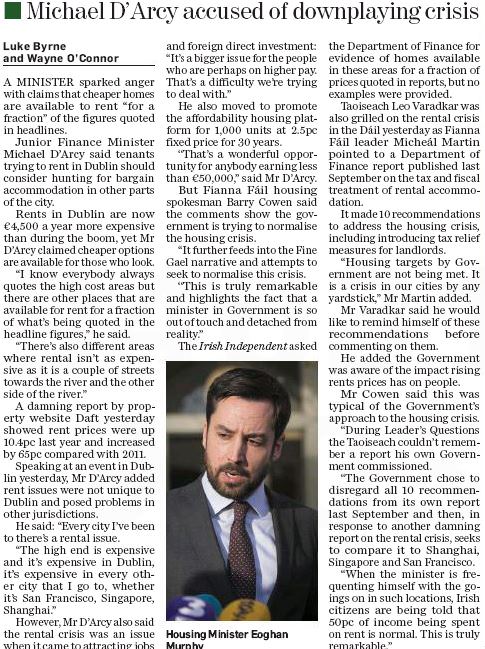 SDCC could build almost 600 houses in the next 5 years rather than give money which goes to landlords’ pockets.

I suppose you could say he wins the, “Gaming The System” award when it comes to our massively overstated “Homeless” crisis…

irishexaminer.com/breakingn … 29267.html
*A presumed homeless man staying in a hotel at the expense of the State was found with €12,000 in cash and a further €140,000 in a bank account when he was targeted in a planned operation by the Criminal Assets Bureau. The 39-year-old was targeted as part of an investigation into a criminal gang involved in burglary, theft of plant machinery, and defrauding elderly people on bogus jobs.
Five searches were conducted in Co Wicklow: Two residences in Newtownmountkennedy and two residences in Bray, as well as a professional office in Bray. It is understood the man was temporarily homeless and required emergency accommodation and was provided with accommodation in the hotel by State authorities.
He was involved in **a gang, involving members of the Travelling community, *here suspected of burglary, theft of plant machinery and targeting the elderly.

Vancouver declares 5% of homes empty and liable for new tax
After introducing a 20% tax on foreign buyers, the city in western Canada is continuing to tackle housing affordability
theguardian.com/world/2018/ … or-new-tax

Thousands of homes in Vancouver have been declared unused and liable for a new empty homes tax as part of a government attempt to tackle skyrocketing home prices and soaring rents.

About 4.6% or 8,481 homes in the western Canadian city stood empty or underutilised for more than 180 days in 2017, according to declarations submitted to the municipality by 98.85% of homeowners.
Properties deemed empty will be subjected to a tax of 1% of their assessed value.

Vancouver has rolled out a raft of measures to cool prices and improve housing affordability in the country’s most expensive real estate market.

Empty houses, also a big issue in the UK, are only one aspect of the problem. In 2017 the provincial government of British Columbia raised its foreign buyer tax from 15% to 20% to target offshore investors blamed for pushing up prices. Toronto, Canada’s biggest city, followed suit with a 15% tax in April.

Before the foreign buyer tax, sales agents said investors in Hong Kong, China and other parts of Asia were acquiring up to 40% of Vancouver condominium projects marketed abroad, absorbing the more expensive units that domestic buyers could not afford.

Nearly 61% of the homes declared empty in Vancouver were condos, and other multi-family properties made up almost 6%, according to the city government. More than a quarter of the empty properties were in downtown Vancouver.

Property owners who did not submit a declaration and those who claimed exemptions, such as for renovations or if the owner was in hospital or long-term care, were included in the empty homes number.

“This is not insignificant considering that the rental vacancy rate is less than 1% in Vancouver,”

here’s the new kind of living of tomorrow, today!!

in a few decades maybe one could afford their own home

Across Asia, foreigners are not allowed to buy land or property, or indeed start a business, without a local partner who is generally required to own 51%+ of the venture.

I assume that this is a hangover from the colonial era when entire countries were owned by wealthy, sometimes absentee, foreigners to the detriment of the local population.

To have experienced that in the past and to allow it occur again would, presumably, be a sign of stupidity…right???

Across Asia, foreigners are not allowed to buy land or property, or indeed start a business, without a local partner who is generally required to own 51%+ of the venture.

I assume that this is a hangover from the colonial era when entire countries were owned by wealthy, sometimes absentee, foreigners to the detriment of the local population.

To have experienced that in the past and to allow it occur again would, presumably, be a sign of stupidity…right???

If you’re interested in the end of the world, you would have been interested, soon after Donald Trump’s election as US president, to read a New York Times headline stating that Peter Thiel, the billionaire venture capitalist who co-founded PayPal and was an early investor in Facebook, considered New Zealand to be “the Future”. Because if you are in any serious way concerned about the future, you’re also concerned about Thiel, a canary in capitalism’s coal mine who also happens to have profited lavishly from his stake in the mining concern itself.

I can certainly understand the cynicism, but surely the enormous cut that currently goes to the government is at least contributing to lowering volumes/raising prices? It won’t work on its own, but it will go some way towards helping.

It’ll help if you believe that lack of profitability is holding back construction in high-demand areas. If there is some other reason (e.g. lag in demand response caused by capacity/funding issues) then it’ll just fill the pockets of the builders.

To take a ridiculous analogy, imagine there’s a progrom on hairdressers which you dodged because you were on holiday in Ayia Napa. You return from hols and there’s a queue round the block to your salon, so you raise prices. If VAT is cut, are you going to cut more hair? No, because you are capacity constrained. It takes time to train up new staff so in the meantime you’ll just get richer.

Anyone for an online course by Trinity on The Economics of the Property Market ?

Owners of vacant sites in towns and villages in Co Galway are having annual levies imposed
3% of the value of the lands from 2019
7% from January 2020
connachttribune.ie/levies-to-be- … in-county/

How long before we have CoBuy speeddating events to meet an investment partner to buy a house/investment to live in?

Government claims it has cut apartment build costs by 15%

Minister for Housing Eoghan Murphy claims that policy changes he introduced to minimum apartment standards have led to a significant drop in the cost to builders.

The amendments to the regulations included reducing the number of lifts and car parking spaces needed in apartment blocks, as well as changing rules that ensured apartments were dual aspect.