How to fix the Pension crisis?

By 2025 pension crisis as per dissapered Deagel.com will get sorted. Ireland is no 114 on the list.

They must have supplied us with some really bad batches…

Taoiseach Micheál Martin has said the Government would look with an "open mind" at a recommendation to keep the qualifying age for the State Pension at 66.

An overall pensions plan is scheduled to go to Cabinet by the end of next month.

Meanwhile, the Chair of the Oireachtas Joint Committee on Social Protection, Community and Rural Development and the Islands has said there is no guarantee that increasing the pension age would meet the potential deficit in the pension fund that could be there by 2050 or 2070.

Because of that, Denis Naughten said, the committee has recommended that the pension age should remain at 66.

there is no guarantee that increasing the pension age would meet the potential deficit in the pension fund that could be there by 2050 or 2070.

but by not increasing it there is a guarantee that by that time there will be a massive deficit… god help anyone who is relying on a state pension rather than funding their own.

god help anyone who is relying on a state pension rather than funding their own.

At that stage I imagine the MMT magic money tree will be printing state pensions Europe wide.

Every month of real interest rates of -5% is effectively money printing. A disincentive to save, may as well buy now, everything will be dearer in a year.

Report of the Commission on Pensions

This is the report from Oct 2021 which recommended

• The Commission endorses the early introduction of an automatic enrolment retirement savings
system, which will introduce a funded component to the pension system and improve
retirement income adequacy for future pensioners.

Not mention either of PRSI

the Commission recommends removing the exemption from PRSI for those aged 66 or over.

Auto Enrolment for Pensions fom 2024 has finally been announced 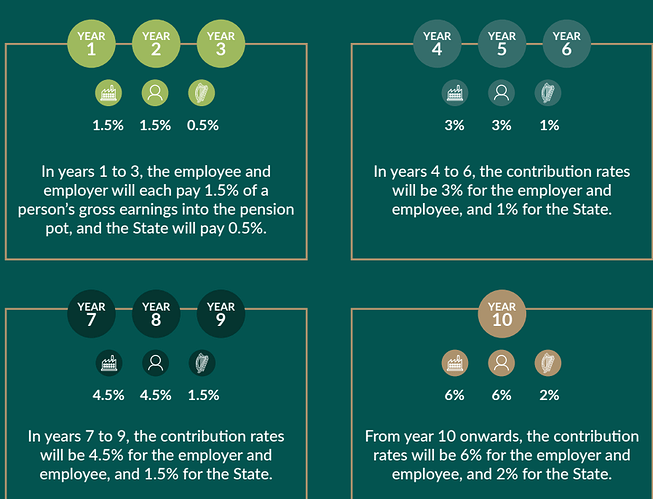 The Cabinet has agreed to draft legislation which will pave the way for a new pension scheme for private sector workers. 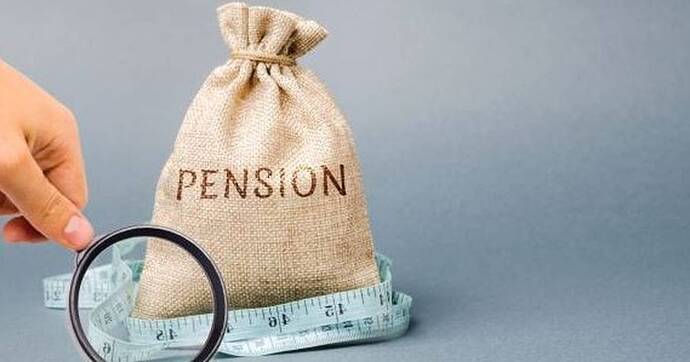 New pension scheme needed to pay for 'generation rent' who will never own a...

The Government has privately conceded that the new auto-enrolment pension scheme is needed for the increasing number of older people who will still be renting when they retire, the Irish Independent can reveal.

What’s the knock on effect?

Long term, maybe this is a good thing. I’m a cynic, but happy to be proved wrong.

Also, a lot more fees for the pension funds.

What’s the knock on effect?

Long term, maybe this is a good thing. I’m a cynic, but happy to be proved wrong.

Also, a lot more fees for the pension funds.

Interestingly, the max fee allowed is 0.5% per annum.

I pay 1.5% for my curernt one. But I guess with auto enrolment pensions, if you get the cotnract, that’s a lot more business coming your way

Auto Enrolment for Pensions fom 2024 has finally been announced

Anyone hear anything since this announcement March 30th?

EDIT:
I checked Oireachtas website and newest update I can find is from PQs in May.

In March I announced that Government approval had been given to the final design principles for the auto-enrolment (AE) retirement savings system. The Deputies may wish to note that a detailed explanatory paper on the new system has been published on www.gov.ie.

The system is expected to become operational in early 2024, and will automatically enrol approximately 750,000 employees at the outset. These are employees who are aged between 23 and 60 years, earning over €20,000 across all their employments, and who are not already enrolled in an occupational pension scheme. Consideration will be given in the future to the feasibility of broadening the system to include those outside the employee cohort, such as carers.

Contributions will be paid by employees through a payroll deduction and matched by their employers as a percentage of the employee’s gross income from employment. The State will also contribute a top-up financial incentive at a rate of €1 for every €3 saved by the employee.

A new Central Processing Authority will be set up to administer the system. This will almost entirely eliminate any administrative burden on employers and will facilitate a ‘pot-follows-member’ approach whereby workers will have one growing pension pot across employments and throughout their working life.

Commercial registered providers of financial investment services, contracted following an open tender process, will provide a well-balanced and diversified default investment fund, plus three other fund options for employees who want to invest their money at different levels of risk.

A lengthy public consultation process was conducted in 2018. Engagement is ongoing between my Department officials and key stakeholders. A comprehensive communications campaign will be conducted in 2023 in advance of the scheme’s launch to ensure that employees and employers are aware of and fully understand the details of the scheme. 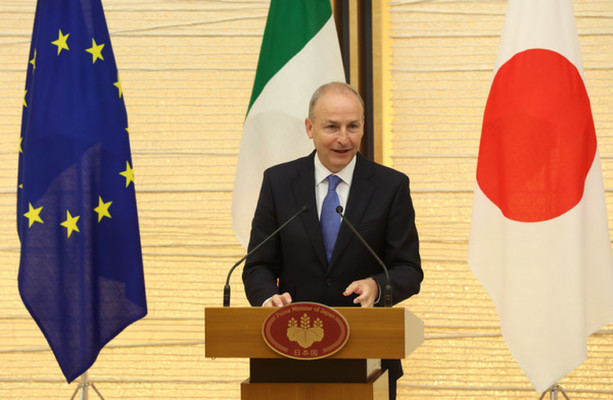 It’s at odds with the recommendations of the Pension Commission report published last October.

This was from July. Now at end of August but still not announced. USA have a similar social security system, where delayed retirement credits can be earned until age 70.

So much for an expert Pension Commission report: basically all of their recommendations were ignored.

Still nothing new on auto enrolment since March 30th. Looking doubtful they’ll meet Jan 1, 2024 deadline for rollout at this stage.

Thursday, 14 July 2022
123. Deputy Niamh Smyth asked the Minister for Social Protection if she will provide an update on auto enrolment; when the draft legislation is expected to be published; and if she will make a statement on the matter. [34929/22]

The implementation phase is well underway, with a project team in the Department of Social Protection progressing a range of elements in the overall plan. This work includes the preparation of a general scheme of a bill to establish the automatic enrolment system on a statutory basis.

To this end, I intend to bring a Memo to Government shortly seeking approval for the drafting of this legislation as a matter of priority, with a view to introducing the draft bill into the Oireachtas later this year.

Tuesday, 26 July 2022
1262. Deputy Richard Bruton asked the Minister for Social Protection if she has set a start date for the auto-enrolment of those with no employer pension into a pension top-up scheme; the initial rate at which contributions will be set; and the implementation milestones involved. [40979/22]

The implementation phase is now well underway, with a project team in the Department of Social Protection progressing a range of individual elements of a detailed project plan. This work includes the preparation of a General Scheme of a Bill to establish the automatic enrolment system on a statutory basis. I intend to bring a Memo to Government shortly to seek approval for the drafting of this legislation with a view to introducing the draft bill into the Oireachtas later this year.

I was previously in favour of compulsory superannuation payments after experiencing the Australian system.

Now im not so sure. The rentier financial sector creams growth to marginal smounts through fees and charges. The government sees it as their plaything too… 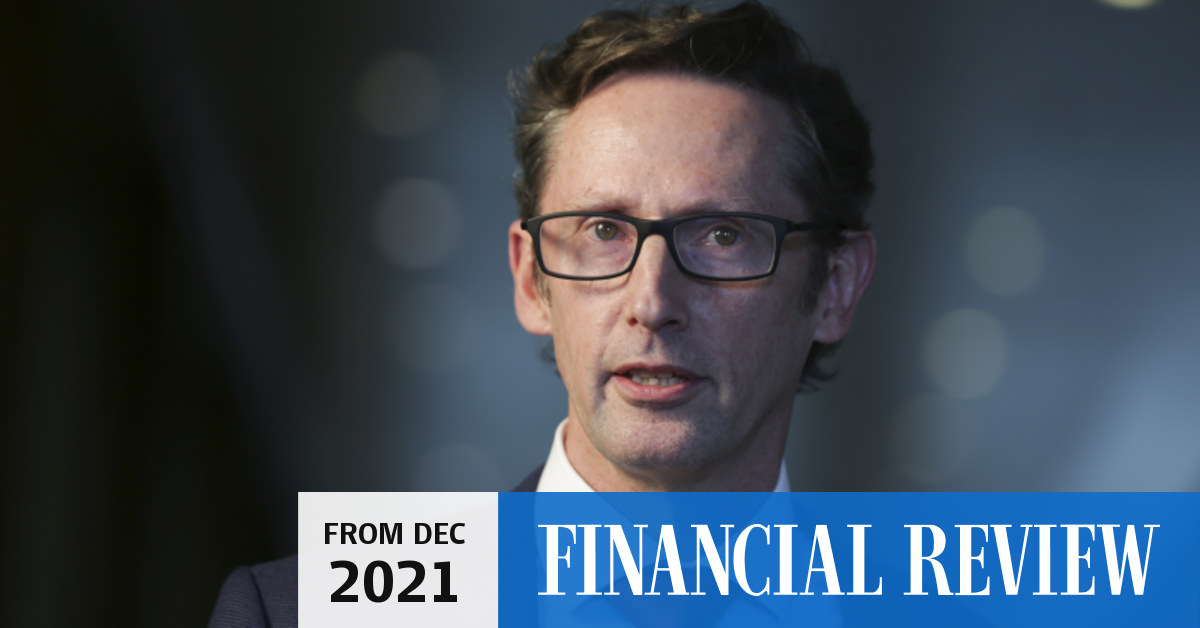 Labor push for super funds to pile billions into infrastructure

Labor will ask super funds what changes need to be made to get them to put more of their members’ money into infrastructure. 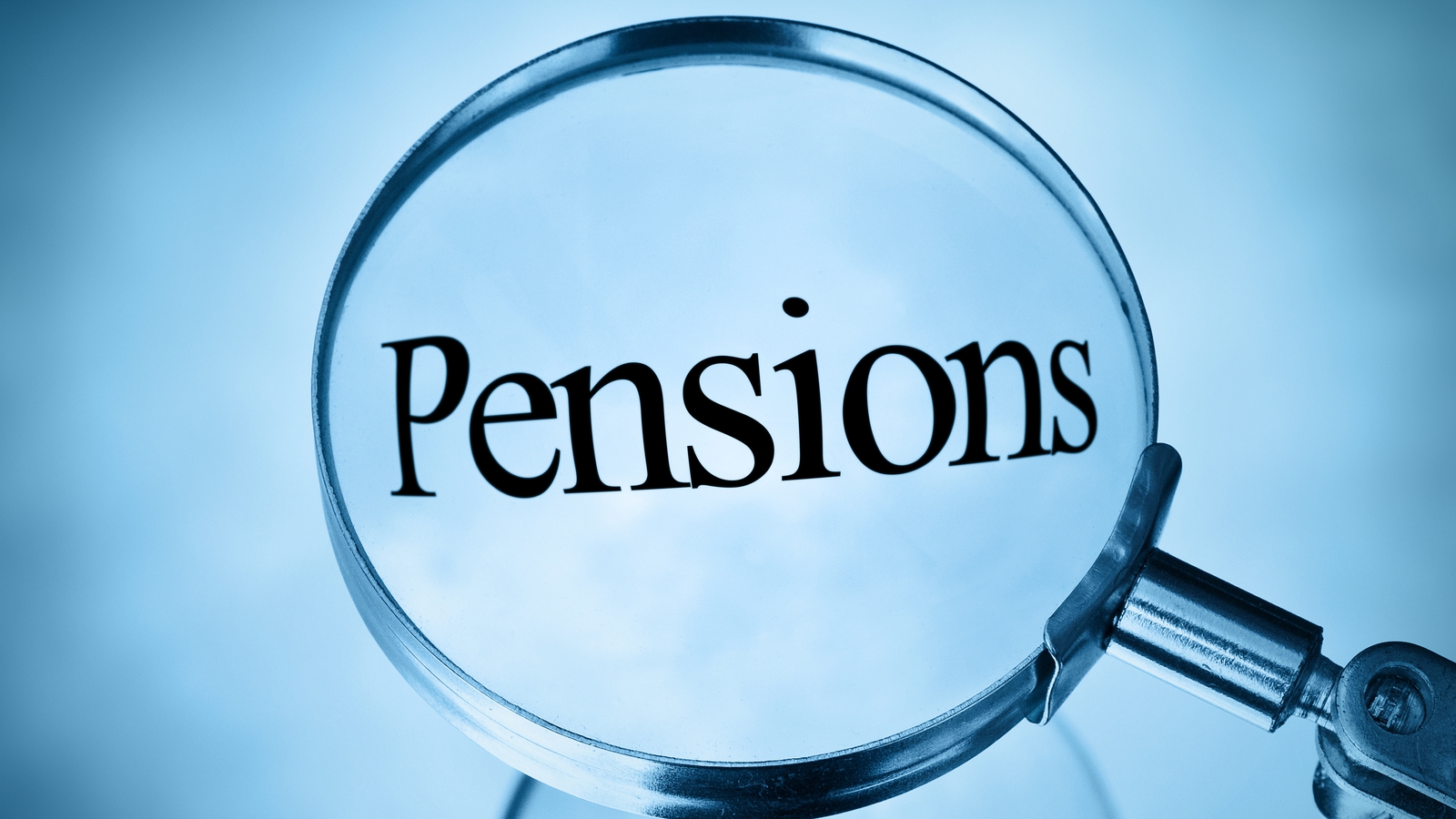 Cabinet to hear pension age should not go beyond 66

Minister for Social Protection Heather Humphreys is bringing proposals to Cabinet to ensure the State pension age remains at 66 - rather than 68 as recommended by the Pension Commission.

It is understood Ms Humphreys is also recommending a flexible pension age, in which people who choose to work beyond 66 years of age receive higher rates of pension payment.

Long-term carers will be able to qualify for a contributory pension for the first time.

It is understood that the amount by which PRSI would have to increase to fund the initiative will only be determined later in the year, following an actuarial review.

However, a source has told RTÉ News that there would be no PRSI increase in the forthcoming budget, and possibly not in the following budget due to the cost-of-living crisis.

The new system would require new legislation and IT systems, so it is understood that the measures will come into force in January 2024.

The Gombeens have been throwing Paddy a Pump Fake for 20 years:

We need inward migration, to pay for your pension Paddy!

Transpires now that Paddy himself will need to stump up the extra PRSI, just to get a basic pension out of the kip

I think the 66 to 70 retirement option is a good compromise. They have the same in USA.

I think, now, its more important than ever that people be forced to retire. Accommodation costs absorb pretty much all extra earning capacity. We have to think long term.

Who wants to leave their children and grandchildren a system where they must work until 70. There are calls in Australia to allow people who still have mortgages past retirement to work. It is seen as a way of helping these people out. Yet it will damage society in the long run. All because they refinanced.