While in the boom years a dramatic extension such as this example, in Crumlin
may have added value to a property, things have gone back to basics.
Photograph: David Sleator 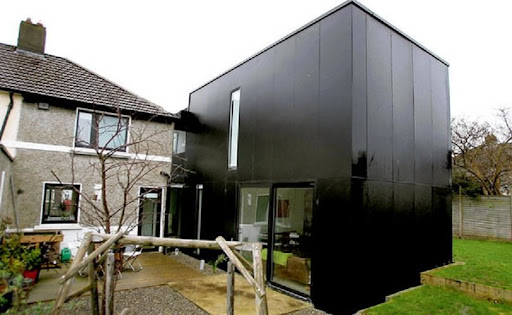 Novel use of a portacabin (or two)

How in the name of fuck did they get planning for that obscenity,it actually physically hurts my head to look at it.

You will be assimilated

There’s some good advice in that article particularly from Iris Keating of Douglas Newman Good. I can’t fault her on her advice for vendors who intend to put their property on the market.

‘You need to move before the market falls further.’

You will be assimilated

Indeed. It looks like a Borg Cube about to assimilate the house. It should not have gotten planning permission.

. Indeed, i always knew Richard Darbyshire was was a man beyond his time…

RESISTANCE IS FUTILE, YOU WILL BE ASSIMILATED AND YOUR HARD EARNED MONEY WILL BE USED TO SERVICE US.

How many years studying to become an Architect?
Seven?
I have approximately zero qualifications in the matter but could ruffle up something better than this.
Someone’s been watching too many naff RTE designers programmes.

RESISTANCE IS FUTILE, YOU WILL BE ASSIMILATED AND YOUR HARD EARNED MONEY WILL BE USED TO SERVICE US.

and you will end up living in a box, more than likely, north facing, single aspect and with a management fee of two mortgage payments

Jesus, its truly atrocious. Black? Who has a black extension? It looks like my CPU with windows.

How many years studying to become an Architect?
Seven?
I have approximately zero qualifications in the matter but could ruffle up something better than this.
Someone’s been watching too many naff RTE designers programmes.

I’d put money on the architect being asked to design something that looks like that, rather than an architect forcing their own vision on a poor unsuspecting couple

Obviously the black cladding is the problem. If it was replaced with copper, zinc and/or western red cedar it might blend in a bit easier, but it would still look awkward and shit.

‘A doctor can bury his mistakes, but an architect can only plant vines.’

Vines it is so.

If it had been concrete grey you could hide it but this is like a feckin neon sign that says “Heavelly indebted gobshites live here and will forever cos no-one will ever buy this form us - ever.”

Fixed that for ya.

Out back, it’s a different matter.

The beefed-up house splices the rear, growing in size from the original 60m^2 to a gargantuan 154m^2.

This dramatic extension, created by an architect and planner husband-and-wife team, earned the house a highly commended for best house extension in the RIAI’s 2008 awards.

Now for sale through agent Sherry FitzGerald, the dark fibre-cement clad house has an asking price of 525,000€, which will test the local market.

Maybe these owners are simply ahead of the curve in Crumlin

Grand Designs has alot to answer for…