Enda Farrell…the man who knew too much

Enda Farrell…the man who knew too much

is Treason still a crime in this country?

Enda Farrell one of the Smart Ballsy guys

Enda Farrell one of the Smart Ballsy guys

Being one the the smart ballsy guys…is well rewarded in hard cash!

Not to take anything away from how wrong this act was, but 65k is relatively small beer compared to the career suicide Enda Farrell and his wife have undergone. I imagine that was the “risk” they evaluated when formulating their plan but this just emphasises how Enda is much less important and nowhere near as smart as he wishes he were. The risk involved in the play appears to have been massively outsized compared to the likely gain.

The guys who get rich rarely “risk it all”, but they frequently like people to think that they did. 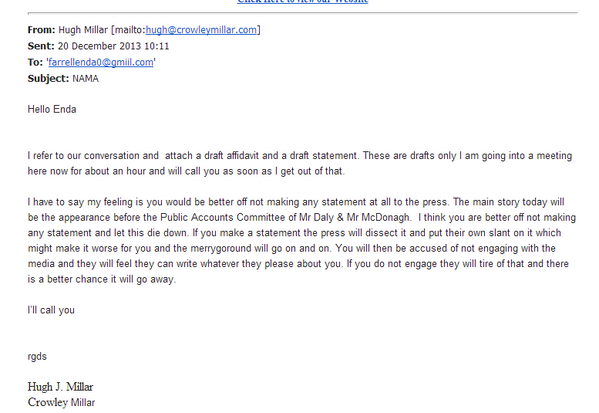 The more I reflect on it, the more serious I think it could be in his case personally. It is not just any old Portfolio Manager in there buying an asset. He was a valuer of assets during the due diligence phase.

Was this connection one of the ones he valued?
If not did he have access to what it was valued at?
Did he have information about the level of minimum offer that would be accepted by NAMA?

And what did the E&Y wife think of all this?

I’m sorry but this is flipping just ridiculous. I’m quoting myself from page 3 on this thread above which quoted Farrell’s linkedin at the time. I heard McDonagh saying on the radio to the committee that Farrell was “not involved in loan valuation”

I know people pump up their CVs but surely McDonagh has to resign?

Cromane native, Brendan McDonagh believes the agency has been the subject of a smear campaign by people trying to undermine it.

But he says Mr Farrell had no role in valuations – so he had no reason to report any inappropriate behaviour.

Is this some sort of Lenny answer? He tells committee barefacedly he wasn’t involved in loan valuation whatsoever. Push a bit harder and find out he was involved in property valuation. FFS is this the type of public servant we have?

Push a bit harder and find out he was involved in property valuation.

No mention as to who exactly this person is who was doing NAMA insider trading.

Yeah, why would they not release his name? He’s been charged according to the story so surely his name should be public?

A former Nama official under investigation by gardai over the alleged leaking of confidential information has taken up a job with a major property developer whose interests include a valuable property acquired from Nama.

**The developer who cannot be named for legal reasons **previously bought the property from a well-known Irish builder with Nama’s approval. At the time of the transaction, the developer’s now business partner was still employed by Nama and directly involved in the management of the portfolio of the builder whose property was being sold.

The Sunday Independent understands that the sale is not the subject of the ongoing garda inquiry and there is no suggestion that there was anything improper about the transaction. Detectives are, however, investigating the former Nama official over his alleged unauthorised disclosure of a highly sensitive document relating to the financial affairs of one of Nama’s biggest borrower clients.

I say he won’t see a day in prison but I doubt prospective employers will be tripping over themselves to employ him and that might make others think twice before passing information to third parties.

A real patriot is that Enda Farrell lad, his family in a few generations time will be so proud when they put together the family tree and see what a man he was

Only two years to charge this one. In ODCE / DPP terms that’s a mere blink of an eye. At this rate of improvement they might start getting some convictions. Maybe even an actual custodial sentence, heaven forfend!

Think he’ll come back to face the music? He’s liable to get a good stiff wrist-slapping after all.

I must find out if he is a neighbour and bring around a box of Barry’s Tea.

It’s coming up to Halloween.
Put on a Charlie Bird mask and start knocking on his door.

Enda Farrell (38) of La Reine, Avenue Louise, Brussels, Belgium and formerly of Dunboyne, Co Meath, was sent forward from the District Court last month on 13 charges contrary to the 2009 NAMA Act for disclosing confidential information in May, June and July 2012.

Enda Farrell is on the lam now. He may get away with it if he shows in three weeks time and is adequately contrite on the day.

He was due to appear before Judge Martin Nolan today to indicate a plea.

Mr Farrell faces 13 charges contrary to the 2009 NAMA Act for disclosing confidential information in May, June and July 2012.

His defence counsel Michael Bowman SC explained to the court that Mr Farrell now lives in France and his wife had a commitment in Germany lasting for two weeks. Counsel said his client had to care for their two young children in the meantime.

What’s he doing giving a Brussels address if he “Lives IN France” eh???