That’s interesting, and I didn’t know…

But then it got me thinking…
OK…
Seems clear that the big crime was when she forwarded the attachments out of E&Y (he only forwarded them to an inappropriate person in a trusted organisation, but that person was still bound by the ethics code etc., of E&Y and E&Y was a supplier to NAMA).

If he plays his cards right maybe he could get away free, and probably with a bonus divorce and a new lease on life. He should probably sue the wife for breach of faith, pain and suffering, reputational/professional damages, etc., at least to secure his ownership of that house they bought, other family assets too. He should also sue E&Y corporately for allowing this terrible situation to befall him through their slack controls, and for hiring the wife in the first place and putting her in position to do this.

He’ll need good legal representation to pull that off, of course…

Jeepers, it’s a good thing you can’t cut’n’paste from excel into an email and preserve the formatting. Otherwise they’d all be at it…

I’d guess you’re giving them even less credit than they deserve.

I’d guess you’re giving them even less credit than they deserve.

They only caught him because they looked after he had bought the property.

The credit I’m not giving them is that they are checking up on people who have access to the information, not that it is not technically possible…

They only caught him because they looked after he had bought the property.

Which is not at odds with the information I provided.

As reported, the reason he had to send the information to an Ernst & Young address was because there were automated safe-guards to prevent sending email attachments to domains outside of a whitelist of companies allowed view NAMA data.

So, to avoid that, he sent the attachments to his wife in Ernst & Young.

[edit] I agree it’s a pretty token safety measure, if that’s what you mean.[/edit]

Seemingly data pissed out of the place by email attachment and the trawl of their mail logs has turned up stuff sent to the likes of Jones Lang and to government departments other than Finance…and that cannot be adequately explained.

However some of it may just have an unfortunate filename and stuff like TreasuryALL.xlsx could be a simple reconciliation of the Nama Treasury accounts and not a list of what Johnny Ronans liquidators will have to get their hand on.

Namawinelake is onto something similar as is FF spokesman Michael McGrath.

If NAMA had uncovered wrongdoing and responded with disciplinary action, then it is keeping it all secret. 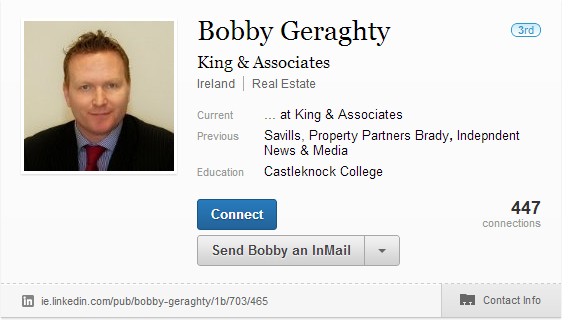 Makes you wonder if he was randomly sending the data to his contacts or if there was some consideration in return.

If the leaked data included nama’s ‘minimum reserve’ as well as the cost of acquiring the loans I can’t see how that doesn’t put nama at a huge disadvantage - even if the asset is then sold on the open market. An analogy: I buy a house for 100k, I subsequently go to sell it, but market conditions are tough. I decide that I’ll let it go for 100k and tell the estate agent as much. The estate agent puts it on the market for 120k but someone in their office tells all the potential buyers that I’ll take 100k. Balls!

Who got the emails ?

Among those emailed were executives at the property investment division of French insurance giant Axa and US company Fidelity International, two of the world’s biggest investment groups.

The insurance company’s property division is the largest real-estate fund in Europe, managing assets of more than €42 billion.

Nama is claiming in a Commercial Court case that information about loans and the ownership of properties supporting those loans were unlawfully deployed in the commercial property market.

Mr Farrell, a property portfolio analyst with Nama until he resigned in February 2012, said he forwarded emails to his wife, Alice Kramer, who worked in Ernst Young advising on compliance and she sent the emails on to her personal Yahoo email account.

Mr Farrell said in affidavits that while at Nama that he sent an email with information in October 2011 to Fabian Neuenschwander, an employee of a Swiss investment manager, The Partners Group.

That month, he sent information by email to Borge Tangeraas, a consultant to property investor FREO Group in Amsterdam.

After Mr Farrell left Nama and while employed as a consultant for six months with UK private equity property firm Forum Partners, he sent emails from March 30th to April 17th to Neil Cable, head of European real estate investments at Fidelity in London and Darren Ehlert, managing director of IN-West Immobilien in Berlin, which was affiliated to Forum.

He also sent information in an email to Andrew Walker in April at the European branch of Forum.

Mr Farrell sent emails in May to Ken Rouse and Stewart Doyle of QED Equity Solutions, an investment company based at the IFSC in Dublin. Financier Dermot Desmond and former Irish Nationwide chairman Michael Walsh are listed as directors of the company.

Another recipient was Tony Waters, managing director of a chartered surveyors firm, HWBC, on Harcourt Street in Dublin.

Could someone please spell out the potential value of the confidential information? Is it just to do with the reserve prices? I’d imagine that the cost of acquiring each loan is irrelevant to any future sale of said loan or collateral.

OK so it may be time to give these shenanigans a name?

What about Namascam, Namaleaks, or “You’ve got mail?”, maybe “The Importance of Being Ernst”?

Time for another piece of brilliance from What Goes Up methinks…

The culture of the place is what is jumping out at me.

Obviously this guy thought nothing of sending such a file via email to his wife. If he had the slightest idea that he might be on dodgy ground, he could just have copied the key details into a notebook or something. James Bond used to have one of these

Which leads me to wonder just what sort of cess pit is in there. I have images of old buddies high fiving in the office as they were ‘saved’ with a NAMA job. Then back to old tricks.

OK so it may be time to give these shenanigans a name?

What about Namascam, Namaleaks, or “You’ve got mail?”, maybe “The Importance of Being Ernst”?

James Bond used to have one of these

And nearly everyone (on a NAMA salary) has a smarthphone with camera that’ll email screengrabs to whereever you want, could even video the screen as you scrolled/paged through the document.

Comes back to YM’s sig I guess.

RE bag search, OT: Clifford Stoll wrote a great book about his real life experience of chasing a hacker in the 80s, Cuckoo’s Egg. In the course of his search, he got to meet guys in the security services (can’t remember if it was CIA or NSA), had a meeting at their offices. The agent he met was very amiable, and Clifford was fascinated that he had a whole selection of rubber security stamps (Top Secret, Eyes Only, Classified, etc.,), and the agent let him take a blank sheet of paper and stamp one of each on it as a souvenir.

Course, when he tried to leave the building and the door guys searched his bag he hit a snag. Security guys turning this “ultra” document over and over, but there’s nothing on it but the stamps… and they have this astronomer/sysadmin guy in his shorts trying to take it out in his backpack. Phone calls sorted it out, but he didn’t get to keep the document. Probably it had to get filed

Back On Topic: I don’t think NAMA is like that, but then again, they don’t pay a price when the information leaks out, in fact there may be more lucrative upside to having a leaky organisation than a tight one. Plus it’s less effort, so we can have either the evil/malice or the laziness/incompetence edges of Hanlon’s razor… maybe there’s a corollary to be defined related to when it’s easy/low-effort/incompetent to do the wrong thing, probably links to the old saw about evil-triumph and good people doing nothing.

“when lazy people with limited skills and weak principles give each other plum jobs, sooner or later you’re fubared”

Mr Farrell, a property portfolio analyst with Nama until he resigned in February 2012

Surely now there can be no justification for secrecy in NAMA. Information must be made publicly available.

“when lazy people with limited skills and weak principles give each other plum jobs, sooner or later you’re fubared”

See if he’ll upload it to wikileaks and end this farce.

Tell the Garda fraud squad. When he is jail pop round and comfort his missus.