Edging closer to 1 million depending on state handouts:

MORE THAN 850,000 people are claiming unemployment benefits due to the coronavirus crisis which has left many businesses struggling across Ireland.

Figures show that hundreds of thousands of people are receiving the new Covid-19 pandemic unemployment benefit as well as those who are registered for the wage subsidy scheme.

“I think it’s clear that the aftermath of Covid-19, Ireland post-crisis will be a different place,” Coveney said.

Nobody should fool themselves that actually recovering from this is going to be easy.

“We have never faced anything like this as a country before, so it’s not going to be easy.

“We have to find a way of rebuilding an economy, doing that in a way that doesn’t isolate people or disadvantaged people because of their circumstance, we have to make sure that the rising tide that will start later on in the summer, I suspect, will lift all boats and that won’t be easy.

“The State is going to have to borrow a lot of money and run significant deficits for a period of time.” 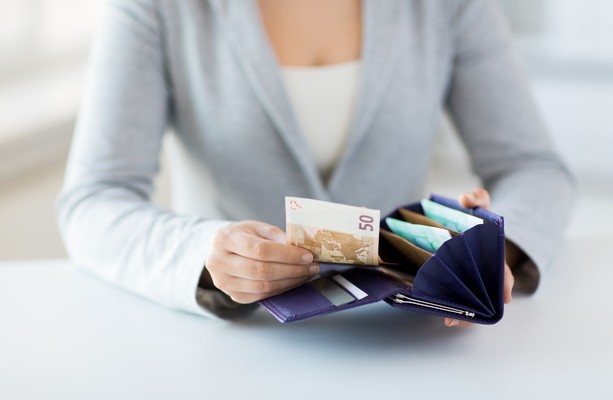 Chief Irish Bilderberg Representative tells us to prey to the Galatic Credit Lords for Credit level COSMIC and sure we are where we are, nobody saw this coming and it was nobody’s fault… “unless you know the source”, according to Donald Trump

Perhaps Ireland should sue China like India is attempting or might that upset our COSMIC Credit Karma Balance?

Eddie Hobbs: Fasten your seatbelt, the worst is yet to come

If you had the nagging feeling that you are not getting the full story, you are right.

It’s time to start issuing debt free money, a government can print bonds to sell, why not print the money instead and put it directly into the economy.

Wow that was a very pessimistic article. He seems convinced this recession will be worse than 2008

Very pessimistic indeed. I would have though the Irish banks should be ok , but I don’t know enough about economics to be sure!!

Sorry but wasn’t Hobbs the dude who rammed his property fund straight into the ground by buying up large swathes of … Detroit? Why the heck would newspapers expect buyers to cough up for advice from that kind of expert?? WTF

Sorry but wasn’t Hobbs the dude who rammed his property fund straight into the ground by buying up large swathes of … Detroit? Why the heck would newspapers expect buyers to cough up for advice from that kind of expert?? WTF

Maybe he learned from past mistakes.

very true Inis_Man, I had forgotten about that!!

Very pessimistic indeed. I would have though the Irish banks should be ok , but I don’t know enough about economics to be sure!!

The panacea won’t be austerity this time around. The post 2007 austerity achieved its basic objective of reinforcing the desired economic behaviour in the masses, objectives like improved productive habits, and corresponding standard of living appropriate to a country’s real productive capacity etc. No - this time they will simply “print” as much money as is sufficient to fix the problems that will arise. It’s a different solution to a different problem. In tandem they will certainly look to increase inflation to a higher level. (Saying that, they will not go anywere near “hyper-inflation”. It is quite obvious that our present day governments have enough authority, stamina and even popularity to be able to stop inflation when they want to. They won’t pussy-foot the issue of inflation when it comes time to to address it, and cause mild recession doing so. We’re not talking about Weimar or Zimbabwean government here…) So, in fact having debt in such an environment would be desirable. And banks will be fine too. That muppet Hobbes has it backwards yet again…

The current hidden unemployment is already around 40%

Ireland will continue in the acute emergency phase of the Covid-19 crisis for “most probably years”, with “further waves an ever-present danger,” according to the Secretary General of the Department of Health.

Jim Breslin, who is due to appear alongside the Chief Medical Officer, Dr Tony Holohan, and HSE Chief Executive Officer, Paul Reid before the new Oireachtas Special Covid Committee today, will tell TDs in his opening remarks, that: "This is not a 1, 2 or even a 3-day storm, after which we move to the recovery phase.

“The acute phase of this crisis will definitely be measured in months and most probably in years, rather than days.”

Ireland to continue in acute emergency maybe ‘for years’

Ireland will continue in the acute emergency phase of the Covid-19 crisis for 'most probably years', with 'further waves an ever-present danger,' according to the Secretary General of the Department of Health.

Hmm, what is this…

He will also tell the committee that Ireland’s health service has been “tested to the limits but not overwhelmed” however “there is much more work to do, in particular in improving test turnaround times” and “the deaths we have experienced in our long-term care facilities are the most difficult aspect of our experience with Covid-19”.

A paradox of oxymorons, I am so confuddled, but I am positively not dead scared.

Cuts to social welfare will be needed if the new government does not push up the pension age to 67 next year.

The Department of Employment Affairs and Social Protection has warned that reductions in other social protection payments may be necessary if the pension age stays the same.

It said ensuring the pension system is sustainable is vital if current workers are to receive a pension when they reach retirement age in the future.

Lagarde: "We Should Be Happier To Have A Job Than To Have Savings"

"Isn’t it true that ultimately we have done the right thing to act in favor of jobs and of growth rather than the protection of savers?" 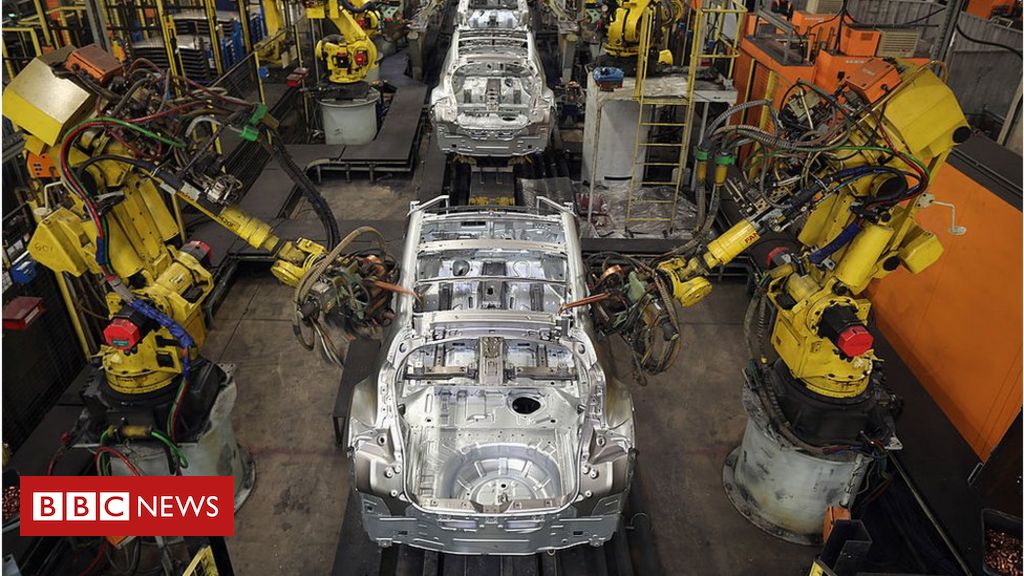 Millions more jobs will be lost to robots with Covid accelerating the trend, says the World Economic Forum.

Half of all work tasks will be handled by machines by 2025 in a shift likely to worsen inequality, a World Economic Forum report has forecast.

The think tank said a “robot revolution” would create 97 million jobs worldwide but destroy almost as many, leaving some communities at risk.

Increased migration adding to the Labour force all the time, but fewer jobs in many areas. How do you see that project working out.

It won’t be pretty

Well the main trend for the past 50 years or so was to import cheap labour to do the dirty/unskilled jobs (look at how well that has turned out), what will happen if you now eliminate most of the remaining semi-skilled jobs with automation.

What do all those people who are not educated enough to go for the (highly sought after) high skilled jobs that by their very definition require extensive education and intelligence for eligibility.

Do we end up with a “fight for the dregs” for all the unskilled jobs, or do we have UBI and lots of unskilled part timers.

97 million jobs is nothing. Around 75 million people are born every year. But every new mouth to feed comes with a pair of hands and a brain capable of doing work. The potential is enormous. You only have to look at the way jobs have changed over the years to see that, yes, there have been huge dislocations, but more and more people are gainfully employed.

The fraction of people working in UK manufacturing hasn’t changed much since 1800. Agricultural work has all but disappeared. Services work has doubled. 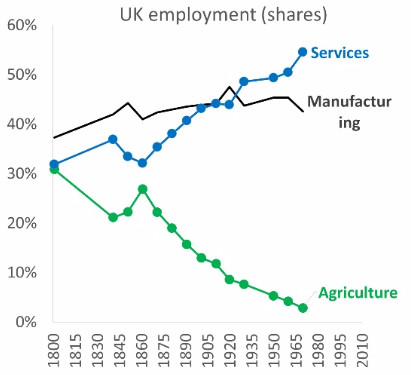 BUT … the population of the UK has increased by a factor of more than six in that timeframe and productivity has vastly increased. It’s a similar picture in the US: 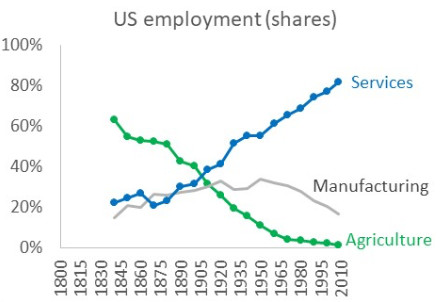 BUT … there are there are sectors that never existed before. And the percentages don’t really convey anything about the actual number of jobs. The US population has increased by a factor of fifteen since 1850! The 4% of people working in agriculture there today is about the same absolute number as back then. And 150 million other jobs have been created. 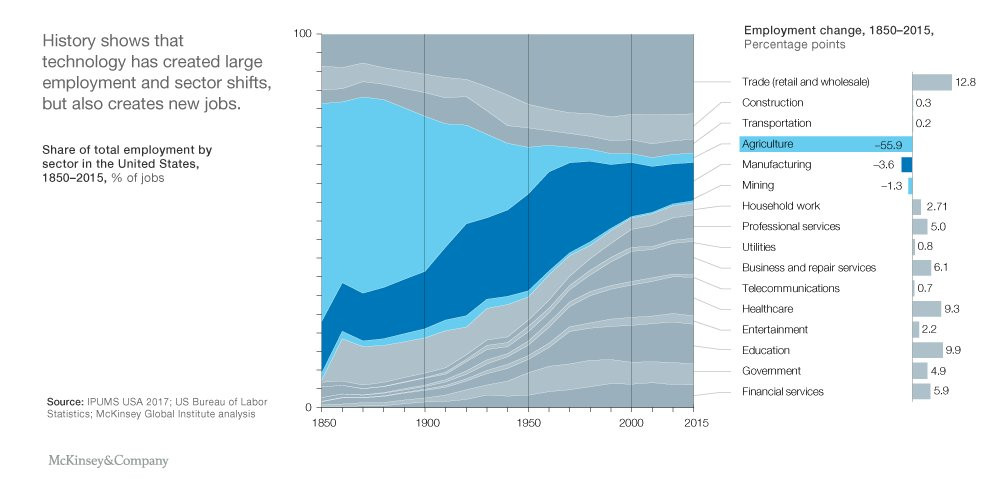 I don’t think robots are anything to worry about. Fair employment practices and wise allocation of capital are more of an issue. The percentage of GDP generated from the land has dwindled over 200 years. The percentage generated by human labour has been more steady. But the fraction that ends up in workers hands has ebbed and flowed with labour laws and conditions. And asset bubbles threaten to concentrate wealth among a rentier class.

(Some graphs sourced from here.)

Yeah, aware of the McKinsey & Co. vision for the future, and the argument made.

But as usual with the likes of the World Economic Forum I do wish they could identify these jobs that don’t exist yet, the need for them and get into specifics on what will be delivered and when.

Especially when the WEF goes around using terms like industrial revolution and disruption which suggests that the changes are not immaterial or exclusively benign.

The likes of Varadkar and Bojo will merely parrot what they hear from the WEF, but they should be pushed on specific deliverables. Again especially when aggressive timelines such as 2025 or 2030 are put out there, and are close to realisation.

Meantime, in the state of chassis we are shouldn’t the Ireland 2040 plan be pushed back to where it came from

New citizens to sign affidavit of loyalty instead of attending ceremonies,...

The ECB hinted that there could be more monetary stimulus coming to the euro zone as soon as December.

Addicted to Money printing/Credit creation at this stage

Maybe it’s time for a rethink on what money actually is and how to best use it in a functioning economy.

Having a system that is hard-coded to produce an infinite debt spiral is clearly not the best way to do things.
With the recipients of all the interest repayments being to only true benefactors.