Hall now wants the Banks to speed up repossessions because of deadbeat Dads!

The Irish Mortgage Holders Organisation has spent the past decade

trying to slow down and discourage courts granting repossession orders to banks and vulture funds.

This thread dates back to the year 2015.

Hall in the Aras? Puke.
Maybe Casino Hall, as president, would revive Bertie’s plan for a gambling resort in the Phoenix Park

*The chief executive of a charity that helps homeowners in arrears has said he accepts that a statement on its website may have misled the public into thinking it did not make payments to board members.

The most recent set of published accounts for the Irish Mortgage Holders Organisation (IMHO) shows that David Hall and three directors — Tracy Mullan, Constantin Gurdgiev and Lucy Cronin — received €96,500 between them in 2015.

The IMHO website stated that in 2015 none of its directors “receive any fees, salary or remuneration for their work from the organisation”. When The Sunday Times revealed in 2015 that five directors had each been paid €5,000 the previous year, the “no payment” claim was removed.*

Any consequences for that misleading claim?

I was half-listening to Marian Finucane/Brendan O’Connor yesterday and there was mention of David Hall talking to AIB about setting up a ‘good vulture fund’ to buy up loans. Anyone head details or read anything about it?

A subprime lender is said to have backed down on plans to repossess a widow’s family home after a protest at the property was threatened.
A possession order secured by Start Mortgages, an affiliate of vulture fund Lone Star, had been due to be enforced today by the Dublin City Sheriff.
However, the repossession was put on hold earlier this week. Mortgage debt campaigner David Hall said this happened after he posted on social media on Sunday saying he would ask people to attend at the house and protest.
According to Mr Hall, Start Mortgages has now agreed to allow iCare Housing, the approved housing body he heads up, to buy the house in the Dublin suburb of Cabra.
If the sale goes ahead, the widow and two of her children will be able to continue living in their home under a rental agreement with iCare…
…In the Cabra case, the woman and her husband bought their home in 1995 with a mortgage from First National Building Society but soon got into difficulties paying off their loan. Start Mortgages took over the mortgage in 2006 and began High Court proceedings the same year.
It is understood a possession order was granted soon afterwards but it was not enforced.
The woman’s husband died in 2012 and the matter did not come before the courts again until 2017. A renewed possession order was granted on November 28 last year.

iCare has modelled its operations on the Government’s Mortgage to Rent Scheme. It is seeking to buy suitable homes from lending institutions where the mortgage holder can’t pay the mortgage and is eligible for social housing.
Mr Hall said the Cabra family fell into this category, but that initially Start Mortgages would not agree to a deal.
“Now Start have agreed to back down and allow iCare Housing to buy the house and allow the family stay there as social housing tenants and Start get paid in full,” he said.
“It is a sensible outcome and will stop a mother and two children becoming homeless.”

Under the terms of the iCare offer, the outstanding debt would be paid, as well as arrears and some legal costs.
The property will then be owned and managed by iCare with the occupants becoming social housing tenants under a 25-year tenancy agreement.
“They are means tested and they pay rent in accordance with the normal social housing rules. The local authority will then pay the balance of the rent,” said Mr Hall.
If at the end of the 25 years the occupants are still eligible for social housing, they can continue to rent.
Should their fortunes improve they will be able to buy the house back at the price iCare paid for it.
However, they will not be able to sell it on at a profit.

Mortgage debt campaigner David Hall said this happened after he posted on social media on Sunday saying he would ask people to attend at the house and protest.
…
According to Mr Hall, Start Mortgages has now agreed to allow iCare Housing, the approved housing body he heads up, to buy the house

Is it racketeering if it’s legal?

This Cabra case is up next on Newstalk, Ivan Yates show

Well Yates would know a thing or two about pulling a stroke like this.

Eventually, and reluctantly the Irish media catches up with Hall and his ‘tsunami of repossessions’ sick schtick

For the umpteenth time, has warned of a tsunami of home repossessions with the volume of displaced families so large they could fill Croke Park.

His latest warnings follow the announcement of a €900 million loan sale by Ulster Bank which includes private mortgages.

There’s no shortage of public sympathy for those who find themselves so hard-pressed that they’re unable to pay for the roof above their heads. And that sympathy certainly intensifies when their mortgage is sold on to a largely faceless private equity company, often referred to as a vulture fund.

It’s important that in the debate around these funds we continue to make it clear that the lower regulatory hurdles they face are problematic and need to be addressed. But when we reduce the debate to rhetoric about floodgates opening, nobody is well served.

Evidence of past loan sales shows that they come after a series of efforts to resolve the issues at hand. Central Bank statistics also makes clear that the repossession rate is falling. Meanwhile, analysis by University College Cork economist Séamus Coffey done in 2017 shows that the vast majority, or 85 per cent, of court repossessions were taken by regulated financial institutions, rather than funds – a fact that is unlikely to sit well with Hall’s “tsunami” narrative which has yet to play out. 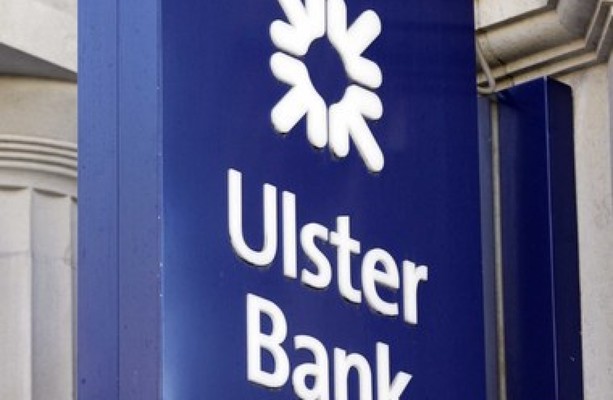 Ulster Bank sells off nearly 4,000 of its customers in massive family home loan...

Fuck all sympathy in the comments

They have been very accomadating to their customers, any other country this would have happened years ago

You forgot the part where the entire loan book is 5 years in arrears. Why are SF adamant at protecting them when they’re living carefree? We’re paying for these layabouts in our interest rates and our bank charges. I have no sympathy.

I wouldn’t even mind but it’s nothing to do with the Irish Government/Politicians or the Irish taxpayer (thankfully).

The British taxpayer via RBS and HM Treasury is selling the mortgages to a foreign owned fund.

How is the yield on a 5 years past due NPL ‘secured’ on an underlying asset that can never be liquidated.

A NEW NOT-for-profit company has said it intends to purchase distressed mortgages from Irish banks and offer owners a chance to stay in their homes.

Homeoptions is offering itself as an alternative option to vulture funds for banks to sell distressed loans to.

He said the company is now actively pursuing the purchase of distressed family home loan portfolios offered for sale by Irish banks.

“We have the same access to funding as the vulture funds have. We also have links to various forms of ethical funding – impact funding as it’s referred to in the States – where they see the benefit in the social dividend from that investment,” he said.

The company expects this funding will come from the US and elsewhere in Europe as well as from inside Ireland and will include investment from pension funds. The funding and asset management functions will be overseen by Irish firm Quartech Solutions, which has experience of managing large loan portfolios.

“We have approached the banks, we have the funders and we’re confident this can be achieved. One of the pillar banks has engaged with us so they’re fairly satisfied we have access to those funds,” Reilly said.

He said the company will take action against people who do not engage with repayment but said this will only happen following board approval after “comprehensive procedures” have been fully implemented.

New figures from the Courts Service published yesterday revealed there was a 52% decrease in new possession cases year-on-year in 2018. The number of possession orders made has also reduced by one fifth.

However Reilly said the cases involving customers whose loans have been sold in recent years to vulture funds as part of large portfolios are “coming down the tracks”.

“We haven’t seen those cases come on board yet, you’ll see it this side of Christmas.”

Edmund Honohan, Master of the High Court, has expressed his support for the new model, describing it as a “no-brainer”.

“There’s no other way. The banks should now support this not-for-profit solution. Everyone needs to step up,” he said.

Fr Peter McVerry also said the scheme was “the most obvious way of dealing with this pending crisis”.

David Hall predicts 20,000 Irish homes will be repossessed over next six years

David Hall predicts 20,000 Irish homes will be repossessed over next six years

To put this is context, I have been tracking the repo figures per the Central Bank for a number of years now. 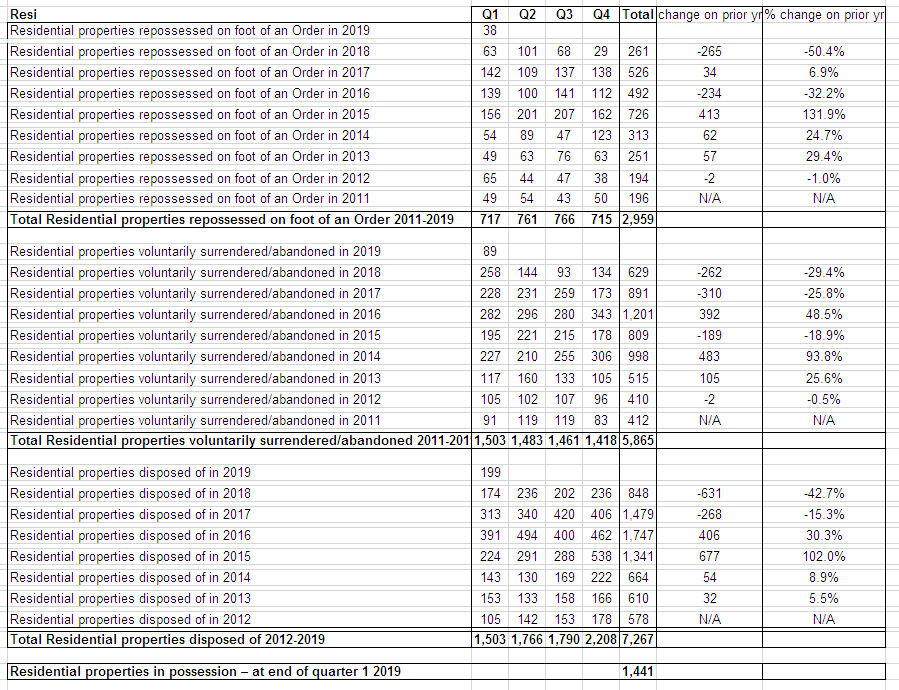 A further 5,865 were voluntarily surrendered in that period. 722 per year.

20,000 over 6 years would be 10x times the number repossessed by court order to date. Absolute nonsense.

David Hall has an article in Irish Times today

More than 9,500 families lost their homes during the recent recession, a statistic many have conveniently forgotten

How many of the already low figure quoted weren’t actually family homes?

In any other publication this would have been filed under Opinion as opposed to Business.