Just saw a video on telegram now - allegations of two Australian children dead. Stew Peters says still no secondary confirmation yet I think. Anyone else seen anything?

Report: 2 Kids DEAD After 24,000 Children Herded Into Stadium for JAB!

Stew Peters spoke with an Australian ex-military official who confirmed that AT LEAST two children are dead after being inoculated in a mass of 24,000 kids that were ushered into a sports arena to tak

So at what point did this forum hit the tipping point of complete derangement?

Jesus the state of it

Intersting quote, is that suppose to serve as a placeholder for an actual point or substantive argument?

It might be of interest. See we expected we might loose all the vaxxed users, not for the reasons you are thinking, or are you thinking that?

Well, this was defo covered during the game planning for the derangement pivot (I can still see that specific bullet point on the whiteboard in the last team meeting) during the design phase building out our strategy to enter and capture that growing niche market and segments. So far analytics indicate we are on track to see totally nutz market share growth, really mad numbers, crazy and truly incredible, possibly the craziest at least the maddest. Mind blowing results.

Yea, anyway so there is that but are you sure you didn’t mean to type in

into your browsers address bar?

You just got told. As I Told ya. Easy to Read. When they tell you in advance, like > IN ADVANCE, that kind of advance which is the only kind.

The former leader on vaccines is now focusing on boosters to protect the vulnerable after cases rose to a record.

The country that was once predicted to be the first to vaccinate its entire population had the highest per-capita caseload of anywhere in the week through Sept. 4, according to figures compiled by Johns Hopkins University. Its world-beating inoculation rate, meanwhile, has tumbled down the league table.

The nation of 9 million became the test case for reopening society and the economy in April when much of Europe and the U.S. were still in some form of lockdown. Yet Israel now shows how the calculus is changing in places where progress was fastest. It’s no longer just about whether people get coronavirus, but also how badly they get it and ensuring that vaccines are still working as the highly infectious Delta variant threatens to undermine immunity.

A girl receives a dose of the Pfizer-BioNTech Covid-19 vaccine during a campaign to encourage the vaccination of teenagers, in Tel Aviv, in July.

More recently, it has led the way when it comes to vaccinating children and rolling out a booster shot of the Pfizer-BioNTech vaccine after research suggested reduced efficacy over time. Around 100,000 Israelis are getting inoculated every day, the vast majority of them with a third shot.

…infections jumped because of the prevalence of cases among the unvaccinated, especially children.

Mother of the girls friend shares the story. in a brief video.

Mr Martin also said that he has “no issue” with the principle of vaccinating children aged five and over against Covid-19, provided it is in line with public health advice.

…His comments come after Pfizer and BioNTech said their Covid-19 vaccine was safe for use for children aged five to 11.

Peppa Pig: Peppa Gets a Vaccination

Peppa is visiting Dr Polar Bear for her health check and to get a vaccination. Vaccinations protect us and those around us. Dr Polar Bear will measure Peppa's height, listen to her heart and look in her ears. At the end of the health check Peppa will... 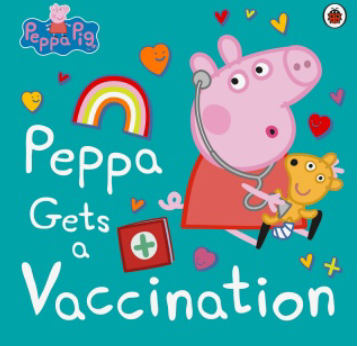 A healthy 16-year-old boy in California reportedly died during a Zoom math class less than a month after receiving his second shot of Pfizer’s COIVD-19 injection, a VAERS entry shows.

On July 13, the boy’s mother filed a report with the Vaccine Adverse Event Reporting System (VAERS) — run by the Food and Drug Administration (FDA) and the Centers for Disease Control and Prevention (CDC) — indicating her son died 27 days after receiving his second dose of Pfizer’s experimental COVID-19 vaccine in April.

“My son died, while taking his math class on Zoom. We are waiting for the autopsy because the doctors did not find anything,” the mother wrote. “He was a healthy boy, he had a good academic index, he wanted to be a civil engineer. He was the best thing in my life.” 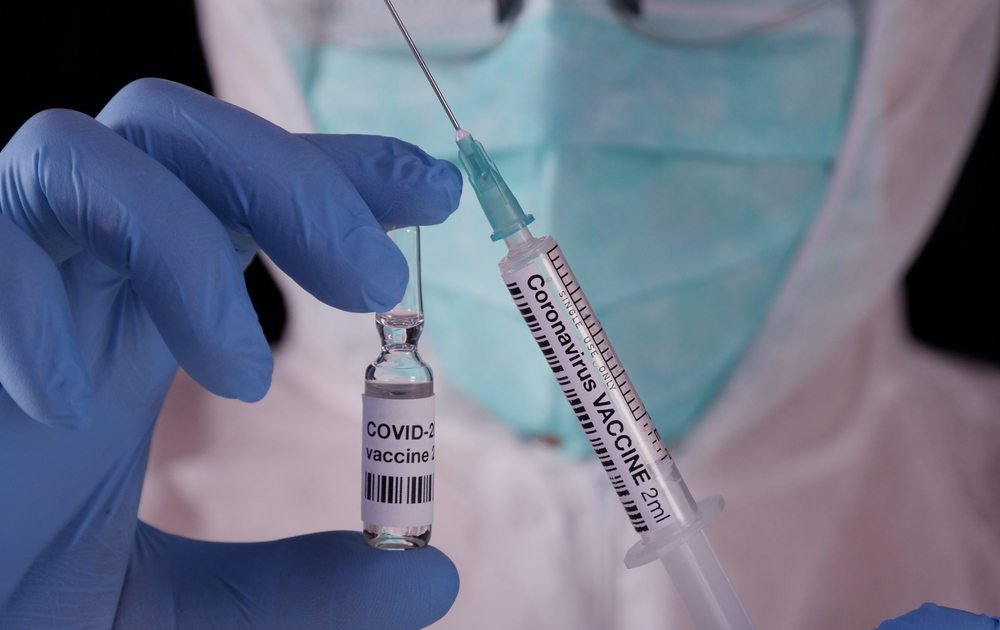 ‘My son died, while taking his math class on Zoom. We are waiting for the autopsy because the doctors did not find anything.’

On average they would see 1 stillborn death a month. 3 dulas have reported that there were 13 stillborn deaths in a 24 hour period of women who had taken the experimental injection. The media is not reporting this. Big pharma looks after the media and the media is silent. 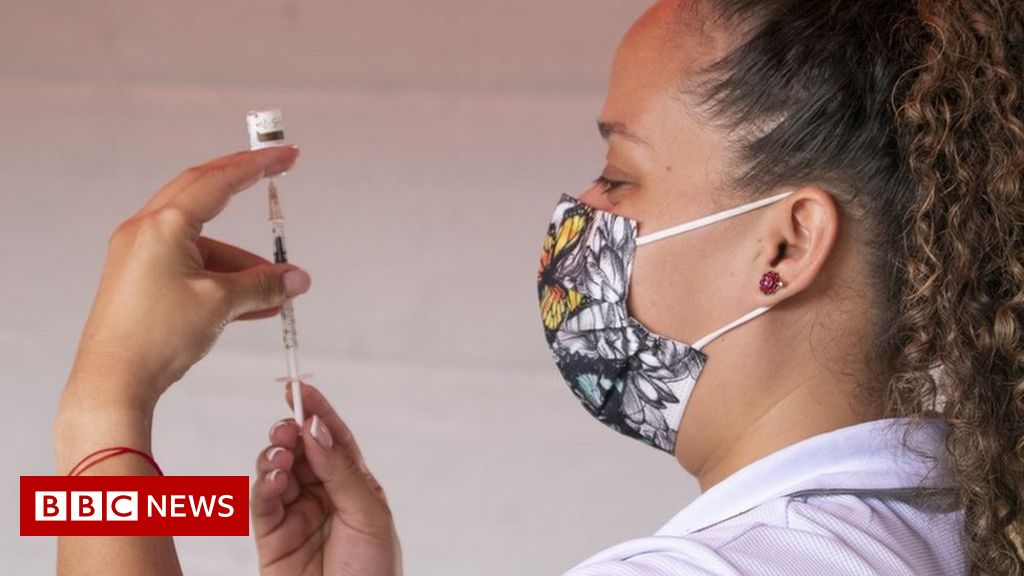 Covid vaccine to be mandatory for children in Costa Rica

The country becomes the first in the world to mandate vaccinations for those aged five to 11.

Tee hee, this got swapped out fairly rapid, but not quick enough:

Taoiseach Michéal Martin has said the Government is looking at introducing vaccines for primary school children but it may take until the new year to begin the programme.

Such a move is pending approval from the European Medicines Agency (EMA) and the National Immunisation Advisory Committee (Niac).

The Taoiseach also said the number of cases of Covid-19 can be reduced without having to go into a lockdown.

Mr Martin said the Government has other options and responses to help tackle rising case numbers.

He said he believes pressure on the health service can be reduced, adding that the booster campaign will have an impact. “We can reduce the spread of this virus,” he added.

Mr Martin said Dr Holohan and other public health and medicines experts are monitoring what is happening to combat Covid-19 in other countries including in Canada where approval has been granted for giving vaccines to children aged 5-11.

Mr Martin said that US Federal Drug Administration (FDA) had given the go-ahead for giving vaccines to young children and the EMA was due to give its decision within the next week or so and Niac would then consider the medicines agency’s advice before making its recommendation to government.

Incidence of #COVID19 is continuing to rise, and today, we are once again reporting a concerning number of confirmed cases.

“We will have to go to Niac here, but I would support the roll-out to children in due course once it’s authorised by the relevant authorities who have the clinical expertise to make that recommendation, but that’s something we will look at very closely,” he said.

“We have to get the recommendation from the EMA, similar to the FDA and that I believe is due within the next week or two but then there will be a different calibration here because the dosage for children will be much lower than the dosage for adults so that is a difference.

“You are looking at a much lower volume of vaccine for children compared to adults, but it’s something on the horizon and on the agenda, but again it’s all in the context of the advice we will receive from Niac and the medical experts.”

Asked if he thought that the roll-out of vaccines to primary school children could happen before Christmas, Mr Martin said he did not think that was possible, given the organisational and logistical challenges it poses even though he was confident companies could meet the demand for vaccines.

“It [giving vaccines to primary school children] is on the horizon and on the agenda and the CMO and others are very conscious of what’s going on in the European level and what’s going on in the United States in terms of FDA approval and the research on the vaccine and children and its efficacy,” said Mr Martin speaking at a tree-planting ceremony at Terence MacSwiney Community College in Knocknaheeny, Cork, to mark College Awareness Week.

Separately, the State’s chief medical officer Tony Holohan stressed that the trajectory of the disease can be changed by breaking chains of transmission through adherence to “all the layers of the public health advice”.

Early research has shown that “people are making many additional efforts to drive down incidence of the disease in the community”, he said.

Almost 57 per cent of people are reducing the number of people they plan to meet between now and Christmas, and 45 per cent have cancelled plans, according to research firm Amárach.

“If we can keep this going, it will have a positive impact on disease transmission.”

He encouraged people to follow public health advice, including self-isolating immediately and getting a PCR test, not an antigen test, if they are suffering any cold or flu-like symptoms.

Dr Holohan urged people to prioritise “who you need to meet and meet others outdoors”.

He asked people to open windows when meeting others indoors, avoid poorly ventilated indoor spaces, wash their hands regularly and wear a mask.

The link now sends you to this version: 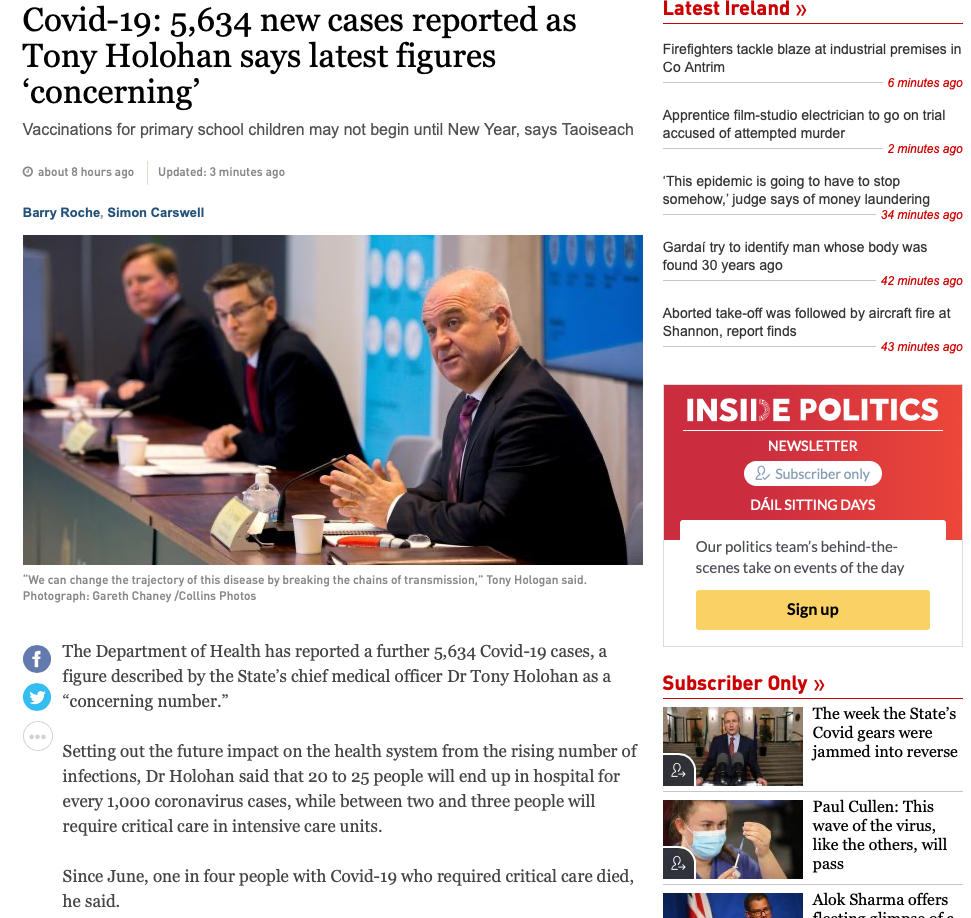 To see what replaced it are is the archive link: https://archive.md/DF1XS

Here is also the original link:

Is a baby born to a fully injected boosted mother considered …?

The Menace Regime have the Headlines packed and the taking expert heads are singing from the same gym sheet today - opening up the masking of young children phase via school system, a precondition and grooming precursor for the deadly injections attack wave.

If they want booster for adults. They’ll want them for children too.

The groomed adults need to realise they have been trafficked in place.

Will they allow the same for their children?

It’s time to have that conversation about “your” children.

Behold the Menace manufacturing the consent to get your children.

They DO be Doing that Don’t they!

Speaking on RTÉ’s Morning Ireland, Prof Horgan said there were several reasons for the case rise in school children. “Firstly they are a group that haven’t been vaccinated. We know how effective vaccines are,” she said.

“Secondly they don’t still use masks. The rest of the population do. So it may be a time to consider that. Because we do want to reduce the infection as much as we possibly can.”

She’s a prof and she speaks like that yea? Localisaiton script writers time difference / coffee break?

Prof Horgan said she hoped Ireland can avoid a lockdown, which she described as a “blunt instrument” and a “last resort”.

We Are Where We Are

The latest figures show that primary school-aged children now have the highest Covid incidence of any age group, with some 10,000 positive cases in the past fortnight.

A report from the Health Protection Surveillance Centre (HPSC) also notes that the infection rate for primary school-aged children has been rising since mid-October, but the risk of transmission within a school still remains “low”.

They were always coming for your children.
Here they are getting ready to collect them.
Closer to the front door they are.
IS that a knock I hear… or a ring of the bell?

The EU's drug regulator has approved the use of Pfizer-BioNTech's Covid-19 vaccine for children between the ages of five and 11, opening the way for them to be given a first shot as Europe battles surging infections.

We’re back in the good place so.

They do these high risk agenda sorties on a Thursday, looks like the squadron of kites has been lost:

Commander Kite, a fully qualified Squirrel Doctor, is not in a good place.

An extra holiday, to add to the nine current bank holidays, has been promoted for several months as one of a range of options for a “pandemic bonus”.

The campaign received backing from the Women’s Parliamentary Caucus, the Green Party and public figures like Joe Duffy, Marian Keyes and Imelda May.